Real Mallorca still have a battle on their hands

After a weekend when I was asked “What do you call a Chinese lady with a food processor on her head ?” – (A) Blenda ! – Real Mallorca caused a major upset on Saturday night in front of 15,437 jubilant supporters beating lacklustre La Liga champions Atletico Madrid 1-0. It’s the first time we’ve done the double over them since 1999. The win was also our first in La Liga since February and we kept our first clean sheet since we drew 0-0 against Celta Vigo on December 10. Kosovan striker Vedat Muriqi was Mallorca’s hero, scoring with a 67th minute penalty, giving us a massive boost in our fight against relegation.

The first half was a niggly disappointment with referee Martinez Munuera the busiest man on the pitch awarding 13 free kicks before half time. However, we managed to do something we haven’t done for ages, put up the perfect defensive performance. Atletico didn’t have a single shot on target in the 96 minutes played, with our ’keeper Sergio Rico a spectator for long periods. With a first half to forget, the second half started with a shot on target. After just 35 seconds, a long distance effort from Olivan saw Oblak in the visiting goal parry the shot past the post for our first corner kick. 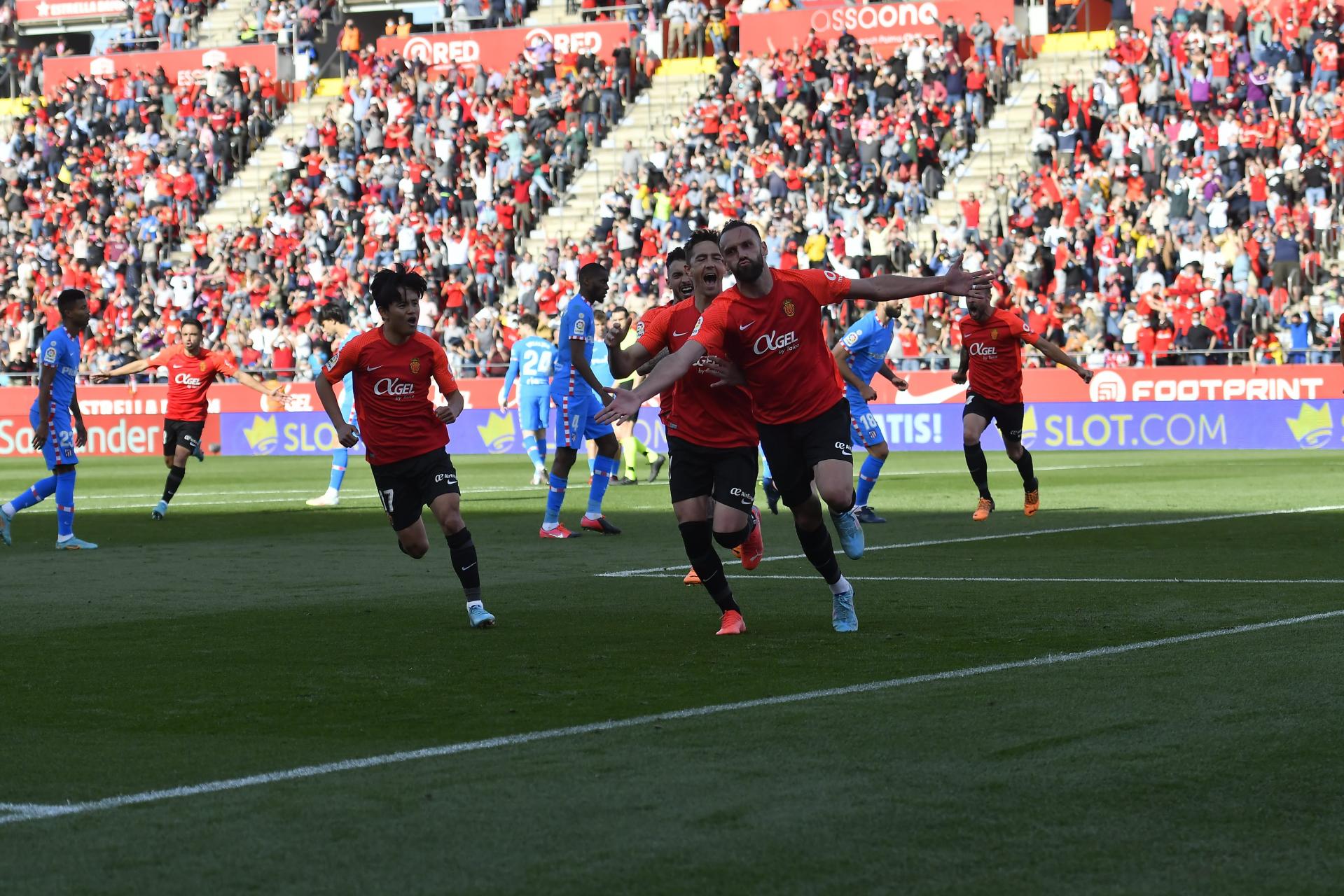 In the 54th minute coach Javier Aguirre made a change. Kang In Lee was replaced by Take Kubo whose introduction was a game changer. His entry breathed new life into the home side and Atletico found his dribbling skills difficult to control. So much so that he was hacked down time and time again. In the 66th minute the game was turned on its head. Pablo Maffeo was stamped on in the penalty box and after a VAR check the referee pointed to the spot. Muriqi stepped up and blasted the penalty high into the net – cue a crowd eruption, 1-0. Suddenly the visitors woke up, pushing players forward and at times it was like the “Alamo” as we hung on for grim death. Then near the end the omnipresent Baba was hit full in the face by a Lemar shot and the young Ghanaian went down pole-axed. The medical team took three to four minutes to revive him before he left the pitch on a stretcher to rapturous applause. Somehow we hung on for a win that takes us out of the relegation bottom three.

SUMMING UP: Kudos to yours truly, in Saturday’s Fan’s View I wrote “I know this sounds ridiculous but there couldn’t be a more favourable time to play At. Madrid; if there is a game when they can afford to take the foot off the gas pedal, this is the one.” Back of the net ! The new coach deserves a lot of the credit for the surprise win. Our defence was much better and although the game wasn’t pretty to watch, he set his team up for a draw and found victory. Saturday’s tactics probably won’t be used when we play the three finals against Alaves, Granada and Rayo Vallecano.

Man of the match (although the whole team were brilliant) was Muriqi, who must have been exasperated to play in this new defensive system. He spent the game running from one side of the pitch to the other and trying to get on the end of balls that flew all over the Son Moix sky. I don’t suppose his job description, when he signed in January, stipulated that defending was part of the deal. He did cover every blade of grass on the immaculate playing surface and literally staggered off the pitch exhausted at the finish.

Towards the end there was a moment of light relief and jiggery pokery as our ball boys/girls appeared to have gone on strike. In a surreptitious ploy to wind the clock down, they stopped throwing the balls back to Atletico players when the visitors wanted them quickly. Several times Oblak had to go and get his own ball, much to his annoyance. In one incident, the ball boy behind the south goal had two balls (Oh, Matron !) but wouldn’t give Oblak either of them. The goalkeeper eventually fetched the two balls himself, putting one behind the goal for future use. As he ran up to take a clearance, the ball boy vaulted the advertising hoarding behind the goal, nicked the extra ball and hid it behind the hoarding – a fine for the club may be pending!

After the game, Aguirre said “It’s been a hard few weeks for the boys and today’s win lifts a weight off the players’ shoulders.” Asked about the fantastic support from the crowd he said “I liked it a lot because I saw families with young children, the seeds of Mallorcanism are being sown. Tonight we will have a couple of beers and have a good celebration after a run when there wasn’t much joy doing the rounds.” Next up, Elche away on Saturday at 2 pm. More of the same please.

AND FINALLY, a very short man is having a drink in a bar when he’s approached by a sexy blonde who tells him “I’ve always fancied a dalliance with a little person, would you like to come home with me ?” The man replies “Sorry, but I’ve had women say that to me before, then we go home and her husband or boyfriend comes in and beats me to a pulp.” “That’s okay,” explains the blonde, “my husband’s away until next week.” So, against his better judgement, he goes back to her place. She’s taking him to heaven and back when suddenly she hears the key in the front door. “It’s my husband ! Quick, hang out the bedroom window and when he goes for a shower you can climb in and make your escape.” So the man climbs out the window, hanging on to the edge by his fingertips. The husband comes in and says “It’s bloody freezing in here” and slams the window shut. The man plummets to the ground. The blonde eventually calls for an ambulance and a couple of days later goes to visit him in hospital. “How are you ?” she asks. “Well,” he replies, “my fingers are broken, I’ve got two broken ankles, a dislocated hip and severe concussion.” “Oh dear,” she says, “it could have been a lot worse.” “A lot worse ?” he answers. “How do you figure that out ?” “Well,” she replies, “It’s lucky I live in a bungalow !”