I love Island hopping around the Balearics and last week my wife and I caught the ferry from Alcudia to Ciutadella for a little 24-hour break to Minorca. I must admit that I just adore Minorca; it’s just a little more laid-back and the pace of life seems to be just a tad slower, and with its complex blend of influences left by the many invaders and occupiers over thousands of years from the Romans and Arabs to the French and British, its gastronomy is rich, varied and unique.

The island also has a long history of cattle farming – both for meat and diary production and with so many herds of dairy cows on the island, butter, milk and cheese are very important for Minorcan cuisine. The first British governor, Richard Kane introduced Friesland cows to the island in the early 18th century and today, the extensive use of butter can be directly traced back to the period of British occupation although cheese making artefacts have been found which date back to 3,000 BC and the local cheeses are famous for their quality. Excellent Mahón cheese is slighty salty in flavour due to the sea salt on the grass that the cows eat, the cheese is also rubbed with butter and paprika during the maturation process, which gives it its distinctive orange rind. The texture varies depending on age, with the younger cheese being soft and mild, and the aged Mahón having a harder, crumblier texture. 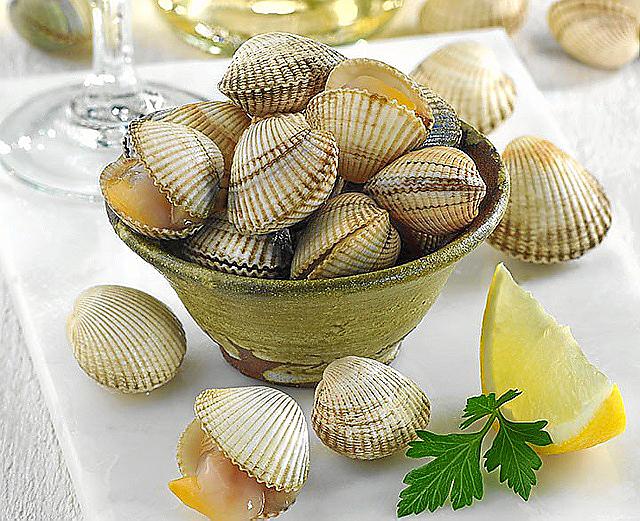 Seafood has always been of utmost importance here and we were lucky enough to grab a table at Café Balear for dinner. They have their own boat called “Rosa Santa Primavera” and as the owner Josep presented us with the freshest prawns, carabineros and John Dory from the afternoon’s catch; I knew we were in for a special treat. We also tried a popular seafood known as “escopinyes”. They are a type of clam eaten raw with a little lemon juice similar to an oyster with an amazing fresh flavour of the sea. What a fantastic restaurant!
Café Balear is also famous for its “Caldareta de Langosta”. 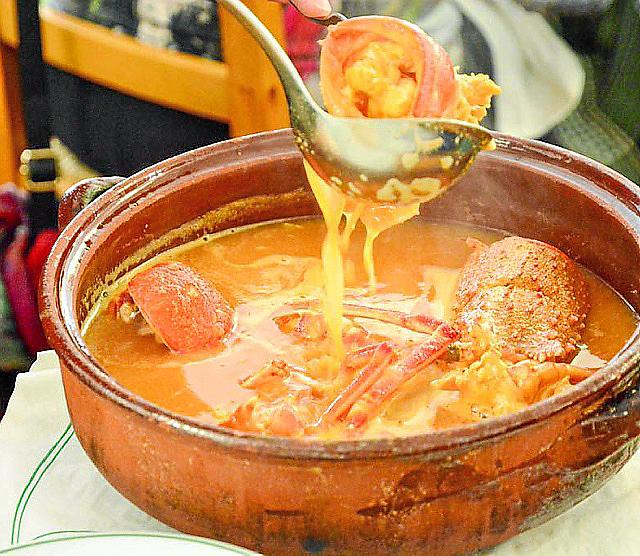 It’s a mouth-watering dish that is served in most restaurants throughout the island and the lobster is the local spiny lobster known as langosta. It is cooked in a tomato, onion and garlic sauce, almost like a soup. It’s delicious eaten with chunks of fresh bread, preferably with a view of the sea. But be warned, it does not come cheap, as spiny lobsters are very expensive and prices vary between 60-100 Euros per person! There are many recipes for caldereta, but mine is a simple version for you to try at home. You can substitute the spiny lobsters with langoustines or normal lobster. Monkfish tails are also another great alternative and work well in this recipe so it doesn’t have to cost you an arm and leg! 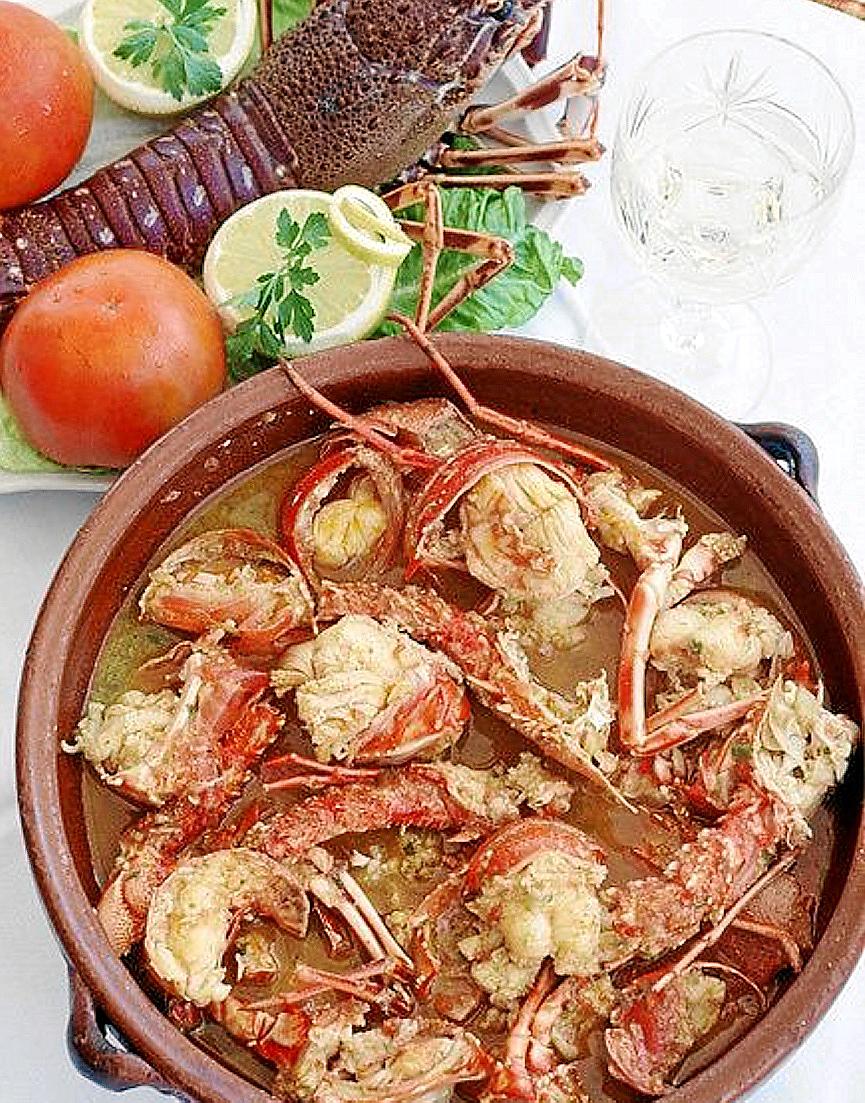 Heat the olive oil in a large casserole dish; add the chopped onion, red peppers, carrots, garlic and tomatoes. Let it cook slowly until it has almost turned into a puree. Add the tomato puree and paprika. Cut the spiny lobsters into serving pieces and add them to the casserole dish. Pour over the fish stock and cook for 10 minutes. Add the chopped parsley and ground almonds, stir well and continue to cook for a further 2-3 minutes. Season and serve immediately.

For something really quick, simple and delicious…try these Minorca style stuffed courgettes. 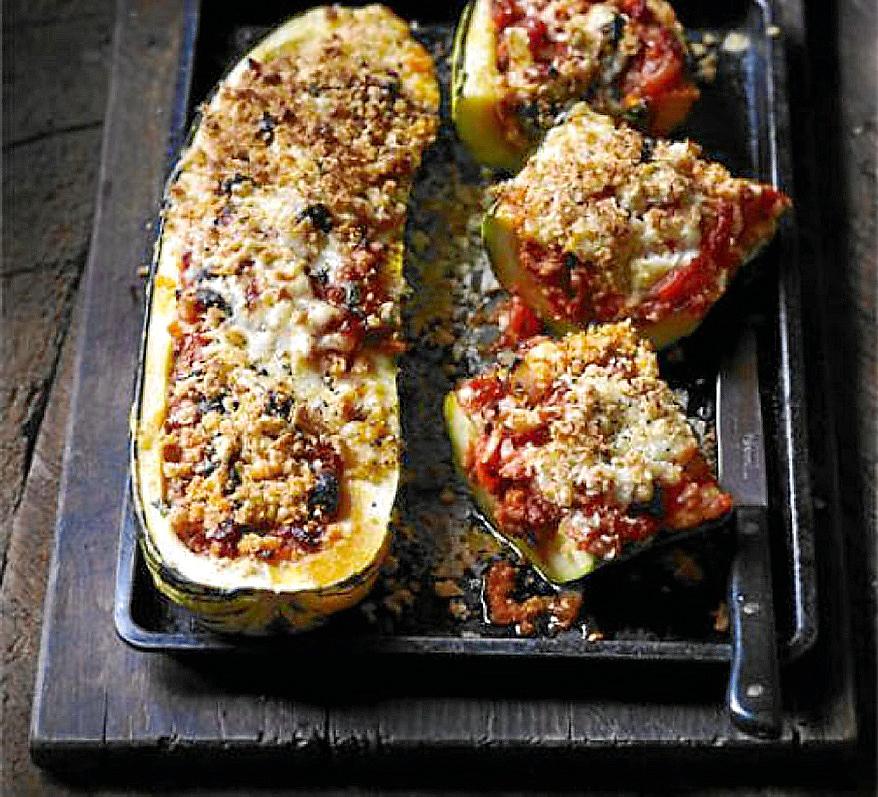 Slice the courgettes lengthwise down the middle, and boil in salted water over a high heat for 4 minutes.

Remove and leave them to drain face down so they lose some of their juice.
When they have cooled, carefully scoop out the pulp with a spoon and set to one side, leaving the skin of the courgettes to form little boats.

Heat the olive oil and gently fry the chopped onion and crushed garlic cloves in a pan over a low heat until they start to soften. Add the grated tomatoes and cook for 2-3 minutes and add the paprika and tomato puree. Cook for another 2-3 minutes and then add in the courgette pulp, capers & chopped parsley. Cook for another 3-4 minutes and season to taste. Remove from the heat and mix in the beaten egg and some breadcrumbs until it takes on the consistency of a paste.

Heat the oven to 180 degrees. Fill the courgette boats with the mixture and arrange them on a tray. Then sprinkle the grated cheese and the rest of the breadcrumbs over the top and drizzle over a little olive oil. Bake the courgettes for around 20 minutes and serve immediately.