Mayor Bàrbara Rebassa and councillors from all parties gathered at the municipal office in the port to present this package.

Alcudia town hall has announced a special package of measures of two million euros for "restarting Alcudia". Mayor Bàrbara Rebassa and councillors from all parties gathered at the municipal office in the port to present this package. The mayor explained: "The reactivation plan includes a series of measures that have been implemented and will be implemented. It is a first package of measures. The world is facing a global fight against the pandemic, and given this health emergency, all institutions, including the city* of Alcudia, have to provide solutions to the most immediate social emergency and to the most vulnerable people at greatest risk. Now, more than ever, we have to agree necessary measures so that the municipality can recover its vitality."

The mayor wished to highlight the fact that the town hall was "united in restoring normality". "I value the unity between all parties" which are represented at the town hall, adding that it was "important to mention the people and groups who, in one way or another, have acted out of solidarity, and the work they have done and are doing for the municipality". "We will not stop, we cannot stop. We are working on more measures, so I extend my thanks to all the parties for the contributions and support they have given. We will stop this virus together."

Among the measures are: suspension of the terrace tax this year; extension of the period for voluntary payment of municipal taxes to December; postponement or splitting of taxes; direct aid for the self-employed and small businesses; increased investment in tourism promotion; increase in grants for the purchase of school books and material; increase in social welfare personnel; reinforcement and expansion of the food bank; introduction of the basic subsistence card to supplement household food with fresh and essential products.

As with other town halls, Alcudia is also highlighting the aid that is available for people who rent. Applications for assistance can be made up until the end of July. There is an income qualification limit of 23,041 euros, and the aid is for rents of no more than 900 euros. These applications are to be made to the regional government (www.caib.es; 'ajudes al lloguer').

It has been remarked on before on these pages that the political parties in Alcudia are demonstrating real unity. Right, left or down the centre, they have been putting differences aside. Which is more than can be said for Pollensa, where opposition Junts Avançam have once more been on the attack over the 2020 budget. As well as denouncing the salary increases for the mayor and executive councillors, there is criticism of a perceived absence of resources for increasing the social welfare budget and to include, for example, enhancements to the home care service and the food bank.

The contrast between the town halls, it has to be said, is rather stark.

The Sa Pobla potato fair should have been this weekend. It has been rescheduled for September. But meanwhile, today and tomorrow plus 12, 13 and 14 of this month, bars and restaurants have special menus for what they're calling the Fira Nocturna de la Patata de la desescalada (evening potato fair of the de-escalation). Seventeen establishments in all are involved - details on the Sa Pobla town hall website (http://secure-web.cisco.com/1N3Ggdz5tYBl2qNMKy3RzJ_iXy___HobvK9QTze6qYzInHWOdQXEdysN1AXvkzRqvBBBeP0gokftJOVYCmVG4M_t8ij0PKJCfMHKTtUk9IdDMIF9SwgUIimkELwdeN6LD0HjyJWp4yBr3ePu93XJ8pHaKTQGboijcRvD86gpO3dEDLzMtJJ4XiXHtYMVOecVdtNVPzq8yh1g03L5uBloc3_-im0m22cusMg4-9xZyCu685NJdjSas2oQUKDjqFf_NS4HCCaoGUVyS2c-nwxCYvw/http%3A%2F%2Fwww.sapobla.cat).

Pollensa town hall has expressed its sincere gratitude to Hans Monheim, who has given his photographic archive to the town hall. It will serve to be a great promotion for Pollensa, read a statement. And so it will. Hans's work over many years has been remarkable. Be it of landscapes, seascapes, fiestas or whatever, his photos are always of the highest calibre and provide a marvellous catalogue of images which show all parts of Pollensa at their best. A splendid gesture indeed.

On Wednesday afternoon, the first time that Puerto Pollensa fishermen had offered fish for sale direct to the public, things went so well that they had to close after an hour or so because they had sold out. The stall was due to have been open for two hours between 16.30 and 18.30. Cap roig (scorpion fish), sipia (cuttlefish), John Dory, sea bream, octopus were all available; lobster has to be ordered on request.

Initially, the plan was to open on Wednesday and Friday afternoons only. Thursday was added this week, and the hours of opening may be extended in future if demand continues to be high.

Just a quarter of the normal sunloungers in Alcudia

In the end, Alcudia town hall has decided to put out only 1,050 sunloungers on the beach. There would normally be 4,100. The number of parasols has therefore been reduced accordingly. The public toilets at the beach will be open, but the use of showers is still being studied.

The sunloungers were put out on Tuesday and the areas were taped off by the police. This apparently resulted in some criticism: a) because parts of the beach couldn't be enjoyed and b) because there were concerns about health measures. Neither were an issue. The sunloungers had been disinfected before being put out and will be again before being used. The fact that the areas had been taped off was neither here nor there. The sunloungers don't occupy any more space than they would normally do, and on Tuesday it was hardly as if the beach was thronged with people.

On capacity, Councillor Domingo Bonnin says that there was no issue with this last weekend in the areas where there are no sunloungers, but he accepts that there may be as the summer goes on. The police are "prepared", and certain measures may have to be adopted.

Alcudia town hall, rather like Muro town hall, is fairly relaxed about the capacity for now. There is, after all, a great deal of beach. 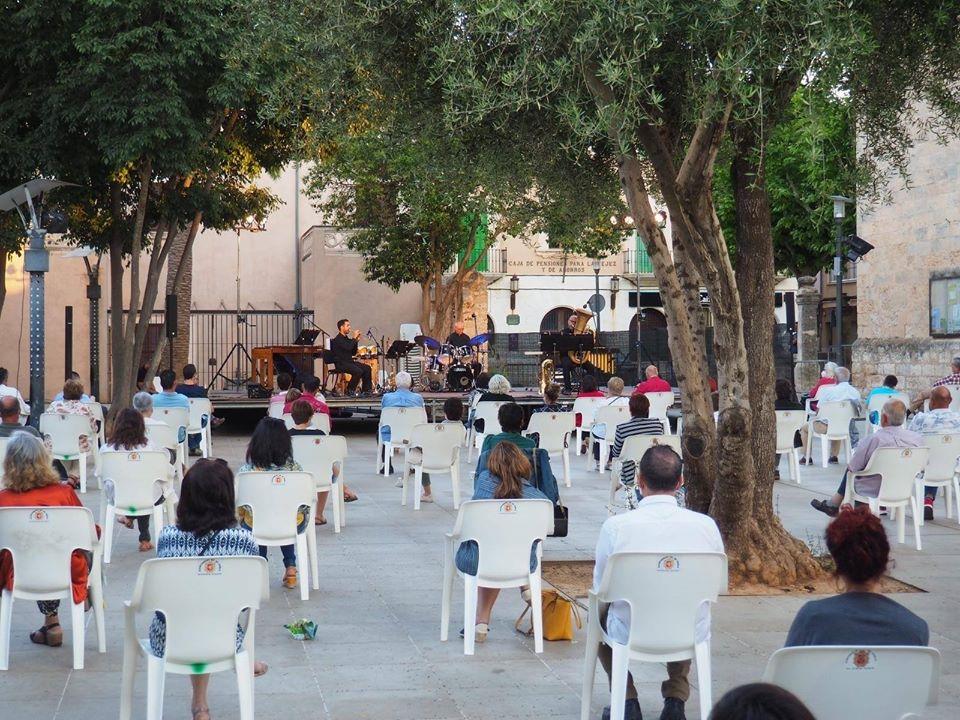 Capacity for concerts will increase, but in Phase 2 and for the first of the revived concerts, the social distancing was striking in Sa Pobla when a group from the Balearic Symphony Orchestra performed in Plaça Alexandre Ballester last Sunday.

Sam and Debbie have been friends for over 25 years here in Majorca. Both single mothers who have raised their children while working on various jobs. They both have an eye for interior design, but from different angles. Debbie with her skills as a successful upholsterer and a creative interior designer. She has built up a very loyal following and has also set up an online business, The Present House, selling home accessories.

Sam has a passion for furniture both with up cycling and refurbishing classic and retro pieces. She has been selling successfully to the trade for many years. They often talked and dared to dream of setting up in business together, combining their creative talents. After all, classic furniture, soft furnishings and accessories go together hand in hand. Last year their dream came true as they decided to go for it and their beautiful shop, de cor, was born. This has proved to be a match made in heaven, as their combined skills are proving to be in ever increasing demand.

At decor we would love to share our passion for furniture, home accessories and interior design with you. 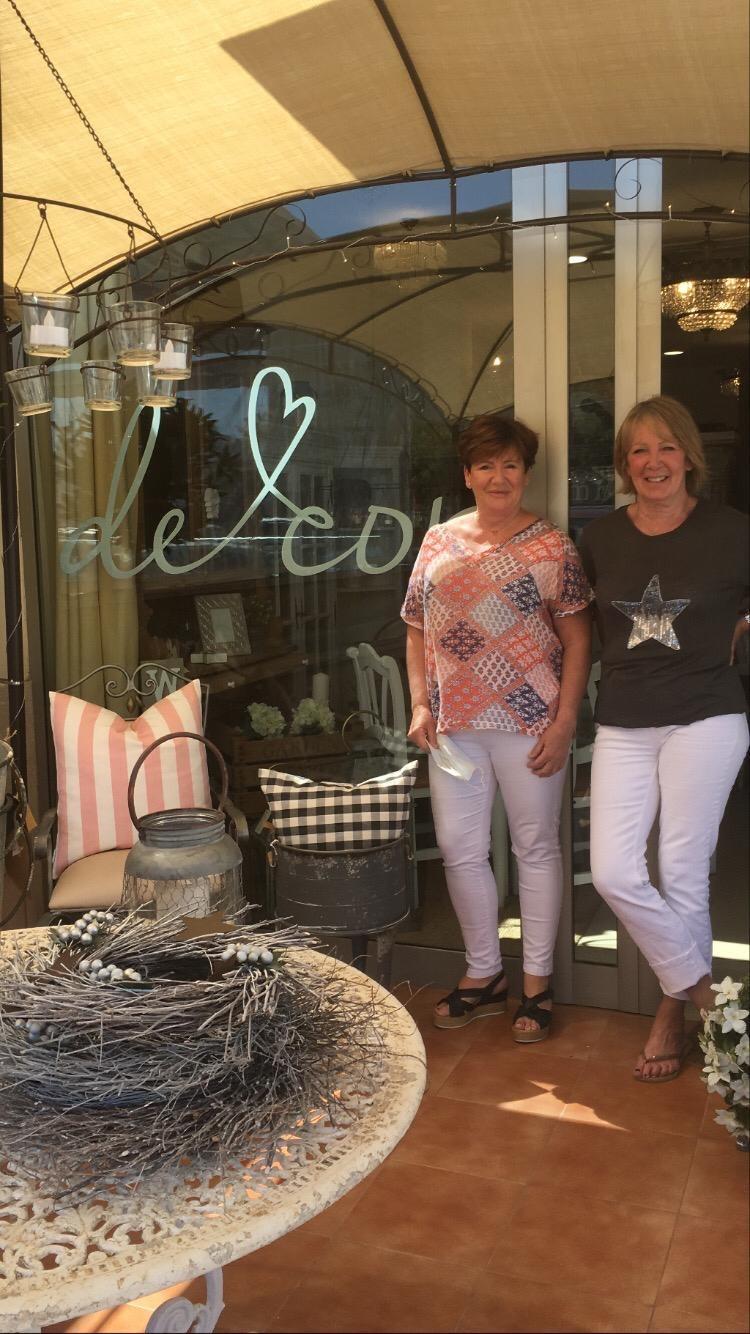 Buying pre-loved, antique or up-cycled designs is a great way to stylishly furnish your home, while also being mindful of the environment. We love mixing old and new so the space starts to tell a story of the person that lives there. “ Some of my favourite pieces in my home are vintage finds, my mid-century armchair in my bedroom and the old french road sign that I have in my hallway” says Sam.

We stock an exclusive range of home accessories from The Present House. We pride ourselves on the fact that nothing in our shop is “run of the mill” or “mass market”, but there is definitely something for everyone. We hope that you love it as much as we do!