The crispy skin suckling pig was worth a 10-rating. | Andrew Valente

Majorcan cooking is so richly endowed with fine dishes that drawing up a list of the island’s 10 best would be an impossible task and I wouldn’t want to attempt it. Even for the top 30 I’d have to leave out so many truly great and memorable dishes. But one thing is for sure — on anyone’s list, no matter how long, roast suckling pig would have to be in the top 10 section.

Roast suckling pig, or lechona al horno as you’ll see it on most menus, is a dish with universal appeal, a true emblematic Majorcan dish. Although it is theoretically a simple dish, you don’t always get good versions of it — I’ve been unlucky in recent years and the lechonas I have been served were far from being emblematic.

But I finally caught up with a splendid specimen last week and it was at Sa Goleta where cook Josefina Perez does one of the island’s best menús del día while husband Leo runs a dining room that’s always packed.

I’ve been eating at Sa Goleta since Leo and Josefina took it over more than 12 years ago but lechona has never been on the menu. But it was last week with a €4 supplement — and it turned out to be the best suckling pig I’ve had in the past seven years.

Leo asked if we wanted the leg part or the chops. I said the leg, because it’s the meatiest, but I immediately changed my mind and said to make it the piece with the crispiest skin: with lechona, as with Peking duck, achieving a truly crispy skin is more than half the battle. Those who know their lechonas can see just by looking at the picture that the large expanse of skin on the chops end is absolutely crunchy — from the first bite to the last.

What you cannot see is the silky succulence of the meat under the skin nor can you sense the temperature of the meat — it was absolutely piping hot. I have never had a piece of suckling pig as hot as this.

I don’t know how Josefina does her lechona (although I’ll ask at a later date) but she obviously has a good butcher and she knows her oven. That combination is enough to produce a fine piece of lechona but a cook with Josefina’s expertise adds even more — and produces a lechona worth a 10-rating. 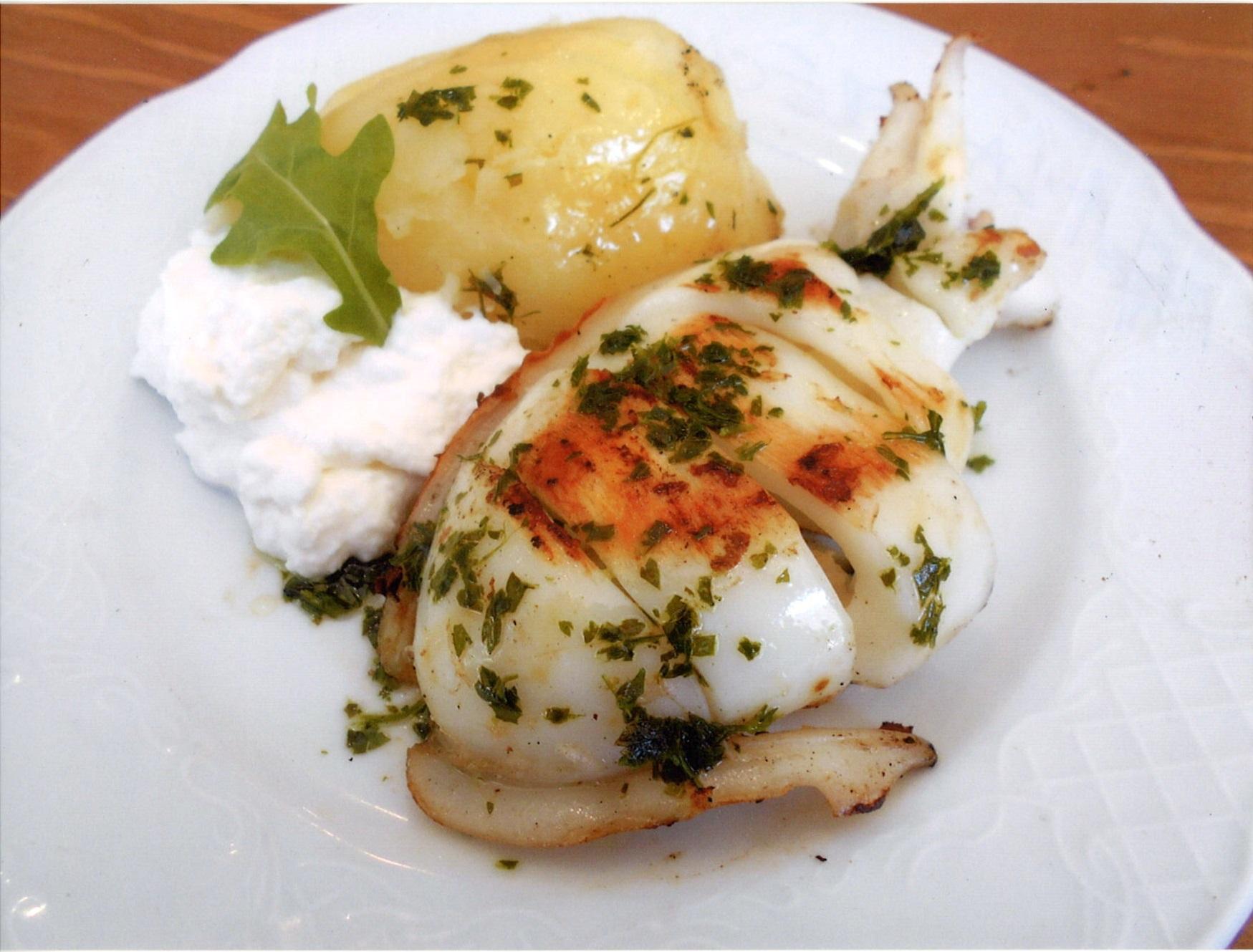 Our other main course was a sepia (cuttlefish) a la plancha, another tricky dish that isn’t always a success. But Josefina’s cooking times were spot on, giving that slight touch of terseness combined with tenderness that is the hallmark of the best cuttlefish a la plancha.

Eating at Sa Goleta is always a bit of an adventure because there are so many dishes to chose from — in few menú del día places are diners so spoilt for choice. But a huge selection of dishes is only part of it — you must also get high cooking standards. And that’s what Sa Goleta has always been good at. The risotto wasn’t a real risotto but it was a very good Spanish-style arroz seco with lovely seafood flavours. The Basque marmitako was an excellent version done with swordfish and a stock with a superb taste of the sea. Both the swordfish and the potatoes were cooked just right. The grilled cuttlefish was nicely tender but with that slight bite to it that gives it such an interesting texture. The roast suckling pig was the best in a long time and everything was right about it: the crunchy skin and the incredible silky succulence of the meat added up to a 10-rating.

Restaurante Sa Goleta, Avda Argentina 34, Palma. This is the top end of Avda Argentina, next to the San Sebastian church. Tel:971-450155. Open every day for lunch. It’s best to reserve a table, especially on Saturdays, Sundays and mid-week fiesta days. If you make a late booking and want to have the suckling pig, it would be better to order it when you make the booking. We shared our suckling pig, but it was so superb we’d rather have had a full portion each. We shan’t make that mistake the next time. They also specialise in paellas and even have takeaways. It’s always best to phone and give them a pick-up time. Sa Goleta opens at 1pm so it’s one of those restaurants were you can have an early lunch.