It generates more than 4,500 direct jobs and around 840 million euros of income each year

Despite covering just four days, the 2022 Palma International Boat Show (PIBS) and Palma Superyacht Village closed its latest edition with 32,000 visitors – twice as many as last year’s five-day affair. Running from April 28 to May 1, the event saw a huge influx of professionals and nautical enthusiasts who were impressed by the quality of the products, the buzzy atmosphere, and wall-to-wall sunshine. PIBS organisers said: “The event has not only been a great success in terms of exhibitor participation, with 276 companies, but it has also performed very well in terms of sales and promotion of the sector, as reflected in public attendance figures, which are equal to those of 2019, when the Show ran for an extra day.”

In addition to the 276 companies – 49 more than 2021 – there were also 264 boats on display in the water, ranging from modest RIBs right up to 40-metre-plus megayachts in the Palma Superyacht Village. 87% of exhibitors in attendance said they would repeat in 2023, testament to the Show’s ability to deliver commercial returns in the competitive nautical sector. Furthermore, 76% of the participants rated the organisation of the PIBS ‘highly’, with 86% being ‘satisfied’ with the experience of taking part in the Show. The nautical sector is of huge economic significance to the Balearic Islands. Made up of some 650 companies, it generates more than 4,500 direct jobs and around 840 million euros of income each year.

Multimar Alcudia Sales Representative, Teddy Torkington, was in attendance: “We, like everybody, were over the moon to be back in action at a mask-free PIBS. It goes from strength to strength and is popular with clients from all over Europe. I personally attended to those who had travelled from Switzerland, Norway and Ireland – especially for the Show. We continue to proudly represent three different brands: ever-popular Axopar who decided to launch the new 45 in nearby Port Calanova, Karnic Powerboats with one of the most popular boats on our stand - the new CS 700, and Grand Inflatable Boats which is based in Ukraine and therefore facing obvious challenges. In all the years that we have been taking part in the Show, we have never seen so many clients who are ready to buy – clear evidence of freedom after two difficult years. One of the principal differences this year is that there were fewer new-boat ‘deals’ to be done due to such high demand and low availability. The knock-on effect is the brokerage market is very strong, which helps to plug the gap. In a nutshell, boats and engines are like gold dust – I hope that this scenario will change for the better soon.”

Guy Norrish from Marina Estrella has been attending the Show for more than 25 years and is also juggling supply-demand issues: “The pandemic has affected the industry in three ways: first, increased demand for boats from all around the world - ‘the virus can’t swim’ motto meant a lot more people chose a floating bubble as the perfect solution to getting away; secondly, a significant lack of labour at virtually all shipyards and, finally, a disrupted supply chain in an industry that likes to keep manufacturing lean. All three have led to the same result - a massively reduced number of boats available to buy and longer waits to have one built. So, whoever had product available for the coming season probably had a very good Show. We certainly did. For example, the excellent new Ryck 280 from Hanse Group which we showed for the first time was an immediate hit. And the boats which we were supposed to receive last autumn, but which are now coming through just in time for the summer, were quickly being snapped up. The same factors mean that people are planning their purchases much further in advance. They know that if they don’t order now for next season, there may not be anything left. On the used boat side, the main web portals look to have something like 40% fewer listings than a year ago so, again, if you can offer recent top brand boats for immediate sale then you are going to have offers coming in very quickly.” 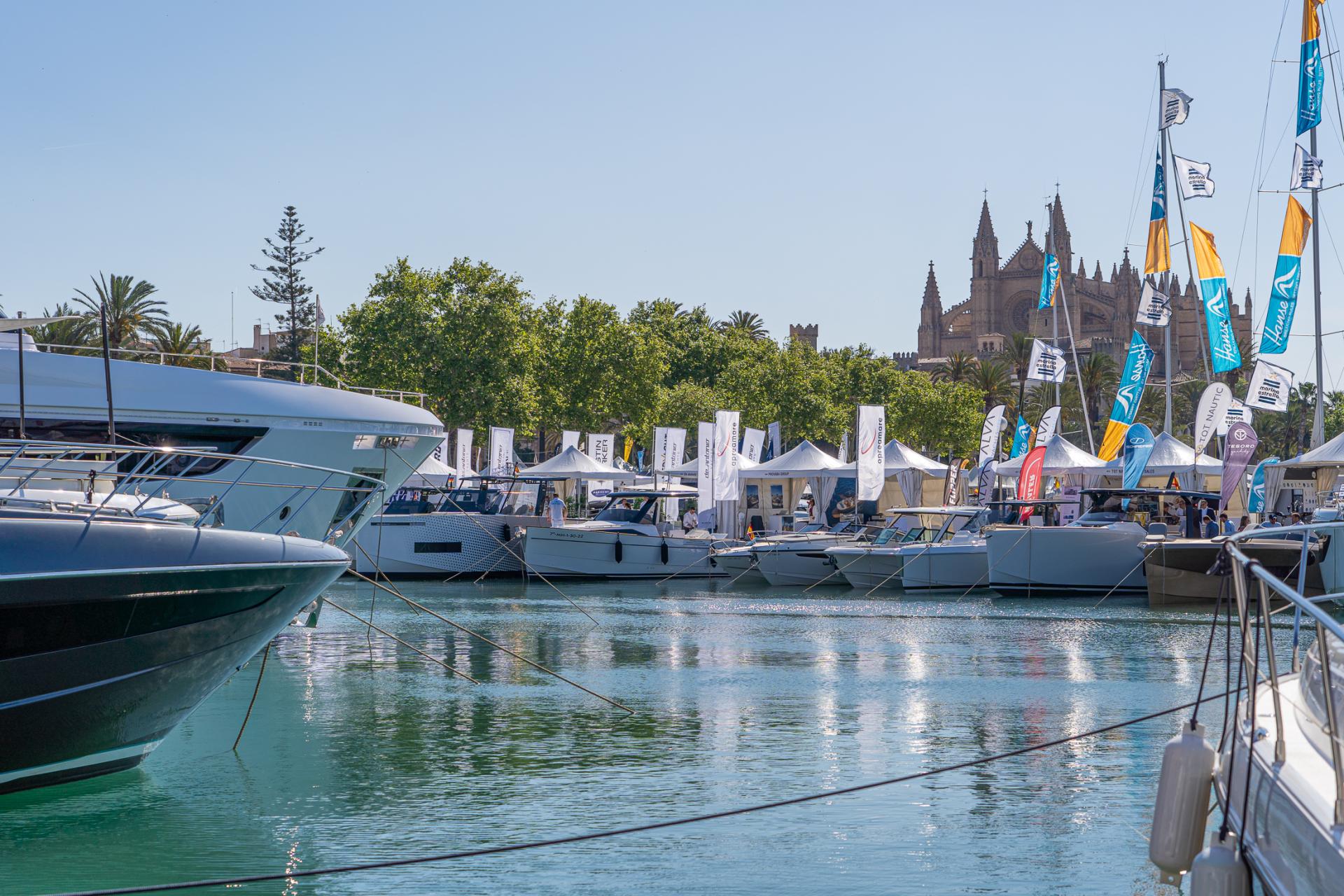 Sales Broker Tim Carbury continued the theme. He’s attended eight consecutive Palma International Boat Shows, the last six with Fraser Yachts. “The Show is back to normal with plenty of foot traffic,” said Tim. “In terms of quality and calibre of clientele, Palma is now closer than ever to Cannes and Monaco. The raucous late-night parties have faded into history, and the Show feels more corporate, more serious, but still with plenty of sparkle. The conundrum is there’s no stock in the industry. The recent MYBA Charter Show in Barcelona featured just 19 boats, there’s usually 50 or 60, and that’s because their charter catalogues are already full. Across the spectrum, there are more buyers than boats. We had six boats in the Palma Superyacht Village – four sail, two motor, all for sale, one also for charter – and had plenty of serious interest. We welcomed genuine prospects from across Europe – Czech Republic, Italy, the Netherlands – although fewer US clients than perhaps we’d expect. That direct United Airlines service from Palma to New York-Newark could do with starting a little earlier next year.”

Miles Moorhouse, Head of Marketing at Fairline, had this to say: “Palma International Boat Show was a busy event for Fairline this year, with footfall higher than pre-pandemic levels. Like most, if not all exhibitors, securing boats to display was challenging, but we managed to get two of our most recent launches there – the award-winning F-LINE 33 dayboat and popular Targa 45 OPEN. The market continues to be incredibly strong in Europe, and Mallorca remains one of Fairline’s prime European territories with well-established dealerships in Portals and Cala d’Or and a third opening shortly in Puerto Pollensa. As a builder, the disruption to the supply chain is a challenge, but so far this year we have managed to stay on plan. Some major components are proving difficult to secure in a timely manner, but our teams at the factory continue to find solutions.”

Sabine Rooker from Scanner Spain was at her 24th Palma Boat Show. Official dealer for Scanner RIBs, they set up business in 1998 and came to their first Show a year later in 1999. “It has changed a lot, but in a good way, and the Palma Superyacht Village is certainly a very welcome addition. This year, we brought four boats from our ENVY Line: the 710, 950, 1100 and the all-new 1400. Mallorca is our main market, so it’s very important that we’re here. We had many interesting conversations with potential new customers and the weather was great – no rain for a change. On this occasion, I think five days would have been better than four. As for supply issues, we placed all our orders – customer and stock boats - back in September last year, so we’re in a strong position for this summer. We are only missing VHF radios from our supplier – it could be worse.”

Sales Director for Sunseeker London Group, Christopher Head, was extremely positive: “We were delighted to attend the 2022 PIBS. What a Show! The sun was shining and there was an electric atmosphere. It really feels as though the world is back. We had a great line-up showcasing the awesome 65 Sport Yacht, the head-turning Predator 74 XPS, classic 76 Yacht and the game-changing 90 Ocean. Mallorca is a sensational boating destination and is hugely popular with the Sunseeker Family. Great business was done.”

Camper & Nicholsons Sales Broker Tim Langmead was similarly upbeat. He is currently representing 33-metre Benetti ODYSSEY III, who had a prime position in the Palma Superyacht Village: “I have attended every PIBS since the superyacht content was added and have always enjoyed being part of the Boat Show community. It comes at the correct time of year, kicking off the Mediterranean season with high hopes. PIBS holds a rather unique position in the annual show calendar. Its manageable size and relaxed ambience make it a fantastic place for the industry to meet and discuss business in a congenial atmosphere, and the fact that the Show serves the charter and brokerage sectors specifically, means it’s visited by a lot of genuine buyers. ODYSSEY III’s classic lines were much admired by Show attendees, as well as the owners of fellow exhibiting superyachts - we had several come by to compliment the yacht’s owners on the incredible restoration. It was also a first opportunity for representatives of Benetti, her original builder, to see the results of the rebuild, which was handled by Pendennis Shipyard.”

Stephanie Skinner, CEO of SNS Yacht Charter, was representing several yachts at the Show: Benita Blue, Rush X, Odyssey III, Sunbreeze, and Marleena VIII. “The Palma Superyacht Show – or should we say Village - has always been a great event, and I have been to every one of them. Growth in the past years has been amazing, and clearly added a huge amount of value to PIBS. It’s perfect for B2C as it’s the only show before the season where clients can look at charter yachts and make plans for the summer. We had five yachts on display and I am confident that some bookings will come directly from the Show. The season is looking extremely promising and it will be interesting to see how much our industry will be affected by the shortage and/or delay of goods – especially given the sometimes very exquisite demands of the charter guests.”

From superyachts to rowing boats and Team Roaring40s - AKA Captain Dan Wise and Ian Yates - who attended the Show with their ocean-going Rannoch R25. The brave duo were using PIBS to reignite their delayed campaign to compete in the 5,000 kilometre Talisker Whisky Atlantic Row Challenge and officially name their boat via a raffle. The triumphant ticket was number 69, and the name ‘Axel’ after the winner’s new-born child. It was deemed fitting to marry the two, so Ian and Dan will set off in December in the good ship Axel 69.

Ian said: “Despite two years of unforeseeable setbacks - COVID-19 and my wife going through cancer treatment - I have no sense of buyers’ remorse. How could I, seeing our boat gleaming proudly in the Palma sunshine? Dan and I are both still mustard keen to set off from Canaries in December. Do we get on well enough to handle 40+ days rowing together? I guess there’s only one way of finding out. And, the question everyone seems to ask, how do we pee and number two? Put it this way, if you move too far from the centreline of the boat, it will tip massively and you’ll be man overboard. It’s not as easy to clamber back in as you’d hope, so bucket it is. Next stop: putting in 120 hours of sea time, kitting out the boat with equipment and supplies, and ensuring we are mentally and physically fit for the challenge ahead.” We wish them oodles of luck.

And finally, fastest growing boat company in Europe, Axopar, decided to commandeer a prime slice of Port Calanova for its ‘Axopar Customer Days’ event which ran concurrently with the Boat Show. A shuttle boat took guests between the two sites. Alongside partners BRABUS, Jobe and Panerai, they had 15 boats in the water and multiple world premieres, not least the Axopar 45 XC Cross-Cabin - the first ever 45-foot cabin boat with outboards. Speaking at the event, Axopar Founding Partner Jan-Erik Viitala acknowledged that his team was having to fight on a daily, weekly, monthly basis to keep making the Axopar magic happen. He said that throughout 2020 and 2021 the market had very much been there, booming, but the global supply chain had let everyone down. It seems that even companies like Axopar who managed to produce 1,000 boats in 2021 are still struggling to meet demand.