Why exercise takes more effort if you’re unfit or overweight

Exercise is a form of mechanical energy

fitness would improve dramatically if you do sport. | Josep Bagur Gomila

Are you familiar with the sedentary person’s conundrum? It goes something like this. The sedentary person, sitting on their sofa, thinks the following four thoughts: 1) ‘I need to exercise’ 2) ‘I don’t exercise because it takes too much effort’ 3) ‘I know that if I started exercising then it wouldn’t take as much effort’ 4) ‘I need to exercise’. It’s a circular problem; a non-starter for those looking to get active.

I can empathise. Exercise does take more effort for the unfit and overweight. Exercise, after all, is about expending a lot of energy over a short period of time. Whenever we run, skip, climb or lift, contracting muscles generate force, power and heat. Increased muscle metabolism demands blood and nutrients, reducing the energy stocks available to our internal organs and brain. Too much exercise leads to dizziness and even organ failure. Sooner or later, fatigue and exhaustion kick in- emotions designed to protect our bodies from the harmful effects of excessive energy expenditure.

In a journal titled ‘Exercise and Fatigue’ published by the University of Groningen, sports psychologists Wim Ament and Gijsbertus Verkerke explain how ‘The exercise intensity, endurance time and type of exercise are all variables that cause different effects within the body systems, which in turn create different types of sensation within the subject’s mind during exercise.’ 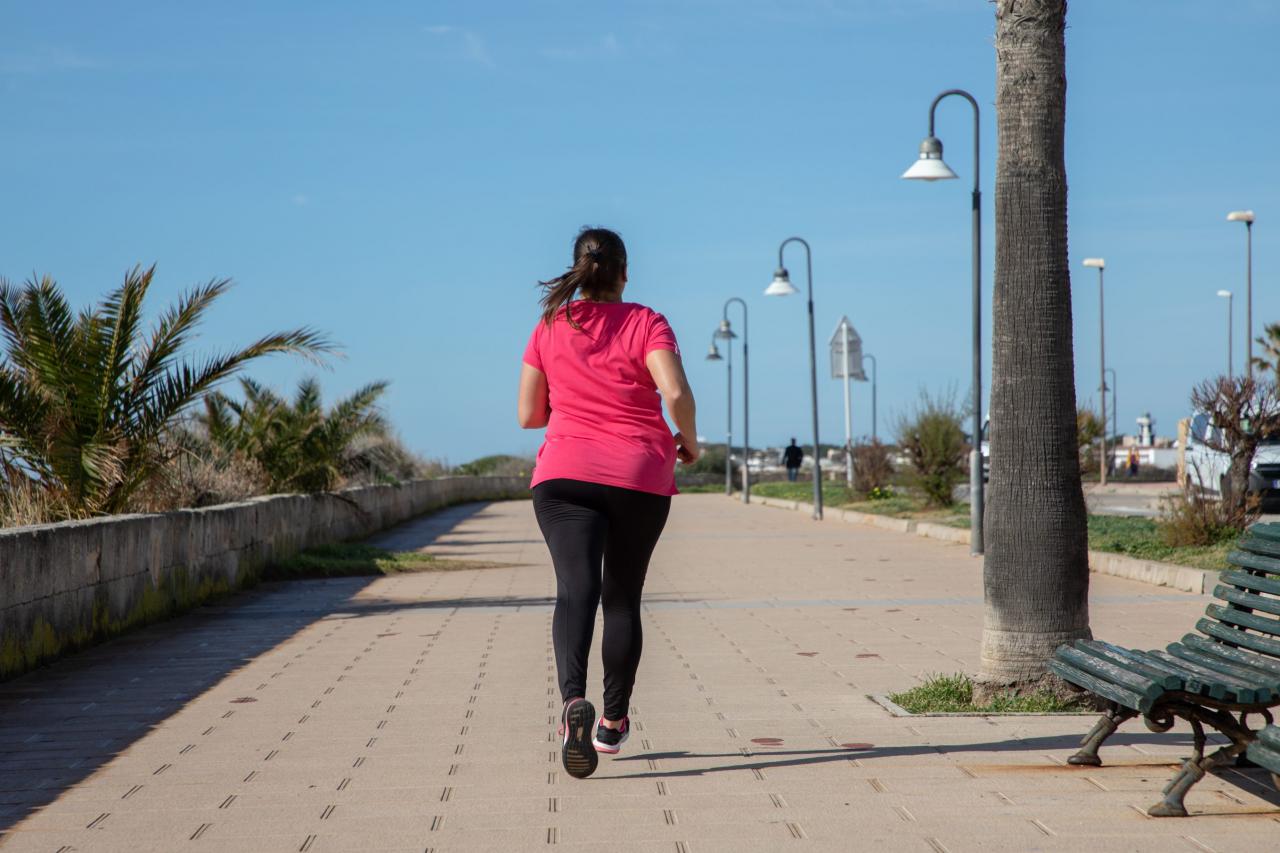 Exercise is a form of mechanical energy. In terms of physics, exercise is work. And work, technically speaking, is the force on an object that overcomes a resistive force times the distance the object is moved. To translate: heavier people have to expend more energy exerting a greater force to move limbs of greater mass. For example, a 5km run for someone who weighs 110kg is more work than for someone who weighs just 50kg. That means more energy expenditure, accelerating exhaustion and fatigue.

And it isn’t just the overweight who struggle. The less fit we are, the slower our bodies pump blood around the body for oxygen and carbon dioxide exchange, nutrient supply and waste removal. Disease also affects the onset of exhaustion, as the body needs extra energy to fight off infection. Whether we’re overweight, unfit, or just feeling under the weather, the greater the fatigue sensations when we exercise. Not only does the body fatigue faster when we’re overweight, ill or unfit, it also warns us not to get up off the sofa in the first place. Just considering exercise makes us feel tired. As Ament and Verkerke explain, ‘many diseases [including obesity] produce a change of mind-set before exercise… creating sensations of fatigue and exhaustion…avoiding exercise behaviour at the onset.’ 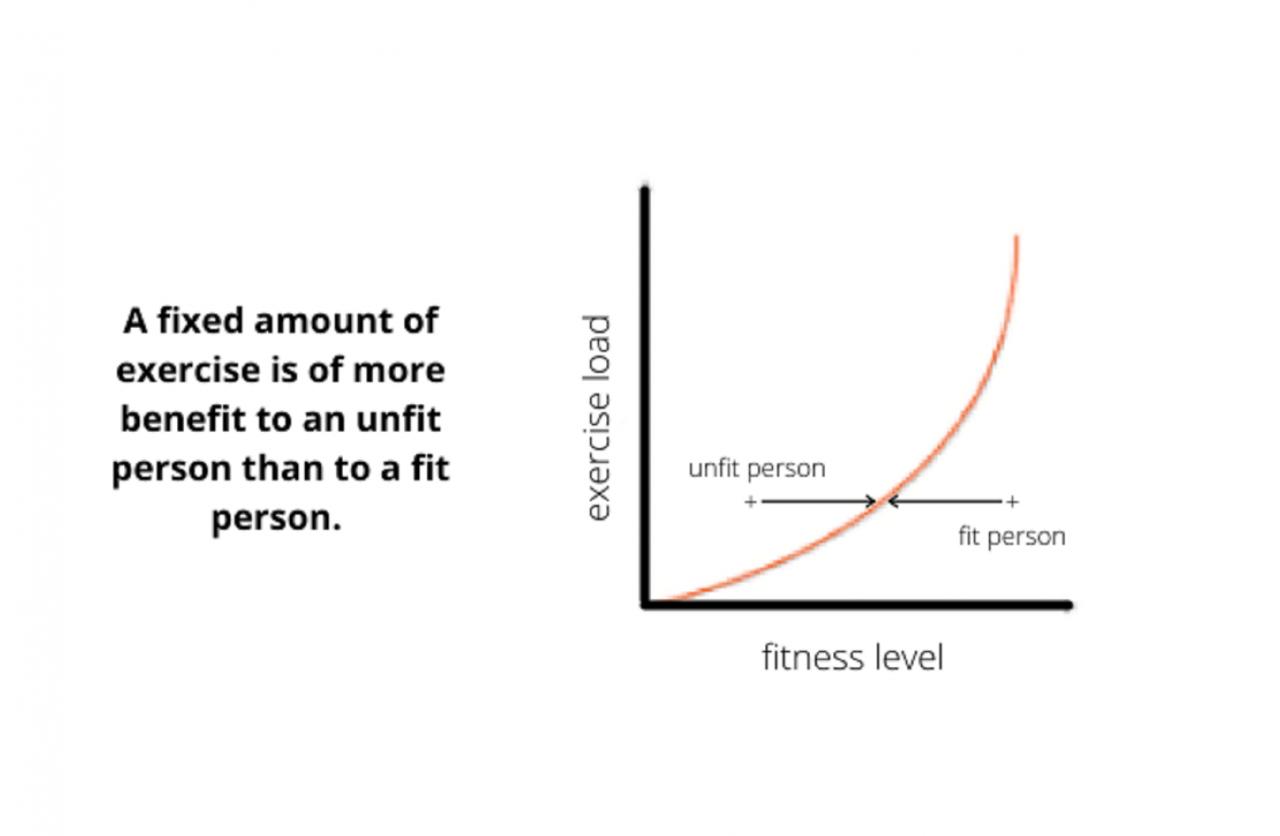 Exercise is mentally harder for the sick, unfit and overweight. A 5km jog does takes more mental effort for them than it does for joggers, footballers and marathon runners. So what to do? Are the unfit destined to stay on the sofa, forever trapped in the sedentary person’s conundrum?

Well, there’s a caveat. The flip side for the overweight and unfit is that a smaller amount of exercise reaps greater fitness improvements than that same workload would benefit the slim and fit. For instance, if I only jogged a single kilometre three mornings a week, my fitness would deteriorate. But if my sedentary friends jogged that same amount, then their health and fitness would improve dramatically. When it comes to exercise, we’re all working towards a mean. See the fitness graph.

There you have it. When starting exercise, don’t look at what the fitness freaks are doing. Start light. So light that you won’t induce feelings of fatigue and exhaustion before you start exercising. Whilst athletes would baulk at a walk around the block, they’re not benefiting from it the way you are.

For more mental tricks on how to get exercising, email me at simon@workingitout.info.