Canela is one of Majorca’s best known and much loved restaurants with a Parisian style decor that gives it a laid back ambiance other top notch eateries can only dream of and Hollywood actor, Michael Douglas says it's his favourite restaurant on the island. 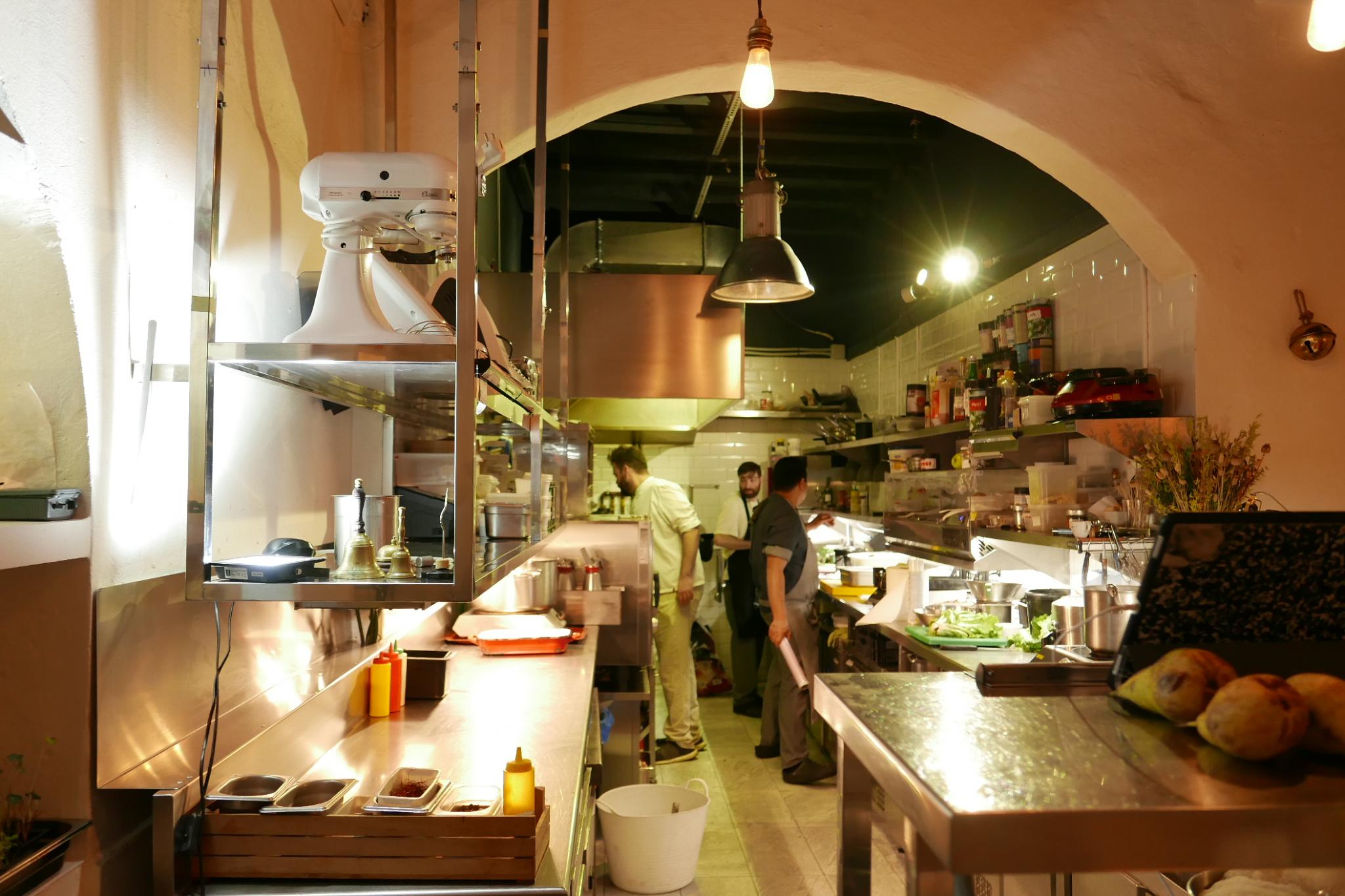 It’s owned by Majorcan Chef, Fabián Fuster and his wife, Irene Rigo and the building it's in has a long family history.

In the 1990’s, Fabián’s Dad, Juan Antonio Fuster, gave up journalism and opened the Canela Delhi on the premises with his wife Catharina Grunfeld Molenaar, who’s a photographer.

Way back then there was no such thing as El Corte Inglés, so they were the only people selling gourmet food. The space was much smaller too and stacked with shelves, heaving with cheeses and hams from all over the world.

But by 1997, they’d had enough of shop life, so the space was converted into a photographic studio for Catharina and Juan went back to work as a journalist. 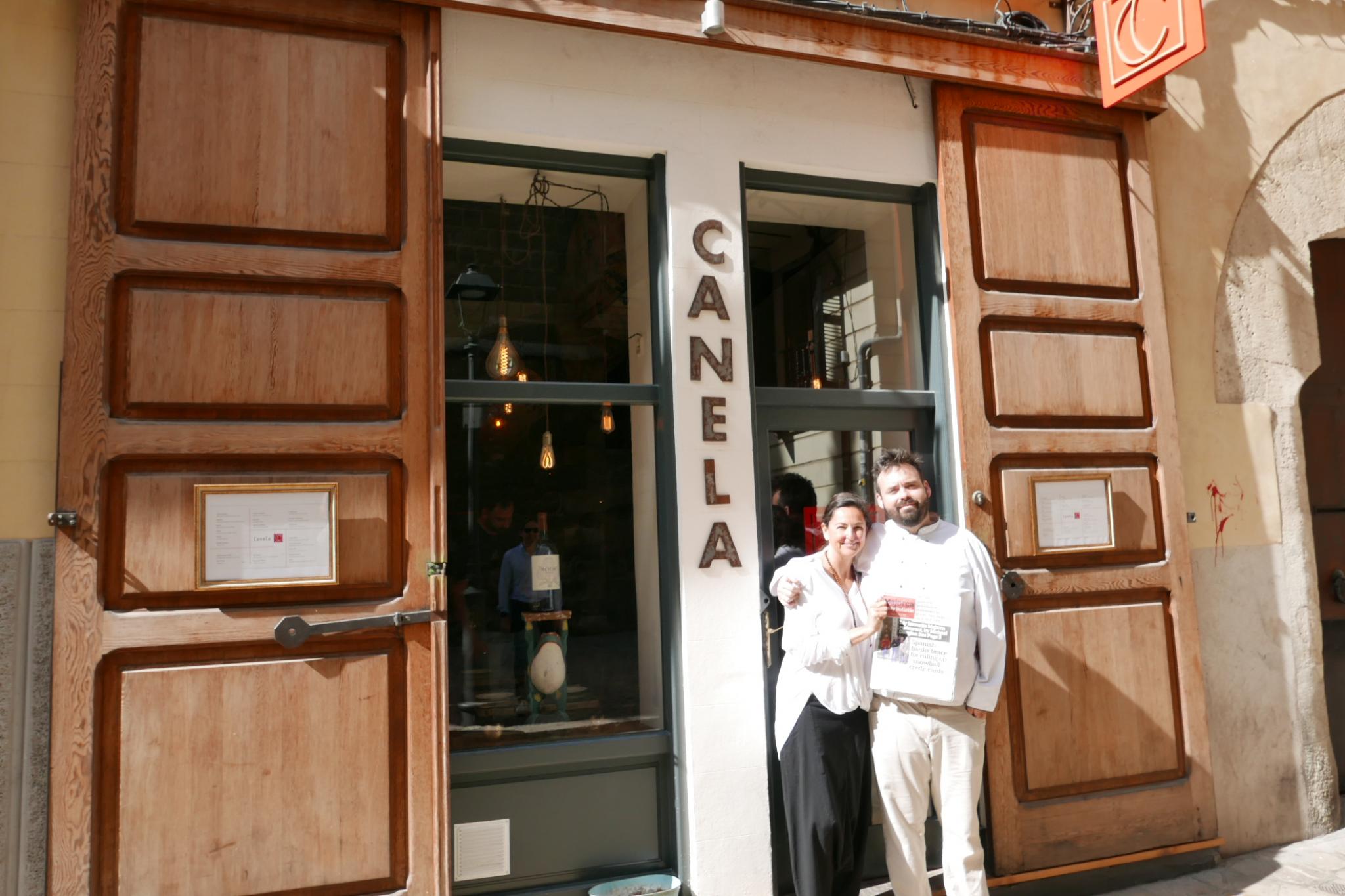 His son, Fabián always loved cooking, but had set his sights on a career as a lawyer, until fate stepped in.

“I always helped my mother with the cooking but I didn’t realise how much I loved it until one summer when I was working as a dishwasher at Jaume’s Restaurant in Deya, he says. "I ended up cooking with them and I loved it so much that I said to my parents I don’t want to be a lawyer, I want to be a cook and that’s where it all started.”

Fabián and Irene have known each other pretty much all their lives, but it wasn’t until they were all grown up that they fell in love and in 2013 they decided to reopen Canela.

“We didn’t have a restaurant licence, so we started as a wine shop, selling really very good Ibericos and cheeses that people could try here at Canela, but it was just Fabian and me with two or three tables in the beginning,” recalls Irene. “We applied for a permit for a restaurant in 2013, then in 2016 we renovated and opened up the kitchen so that people could see how the food was prepared and now we’ve just finished putting in the new wine cellar, so it’s much bigger than it used to be.” 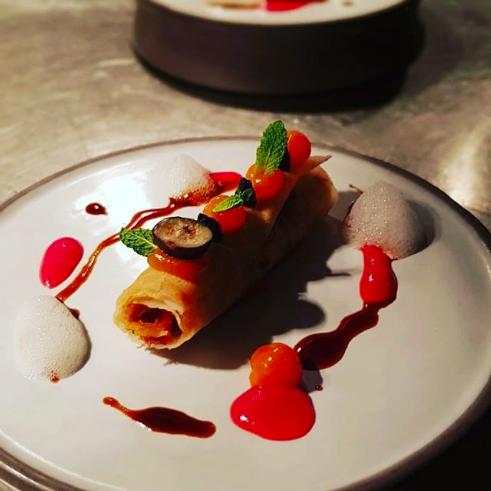 Canela is often frequented by the rich and famous; Danny DeVito and Harrison Ford have both eaten there and Michael Douglas is a regular.

Last Saturday the actor dropped in for lunch with some friends and they tucked into dumplings (Angus short rib, tomato & chipotle ice cream with a lobster bisque); Gyozas (prawns, red tobiko and jabugo dashi; the Salmon and the Koji dry aged beef sirloin with black shallots, or ‘calçots’. 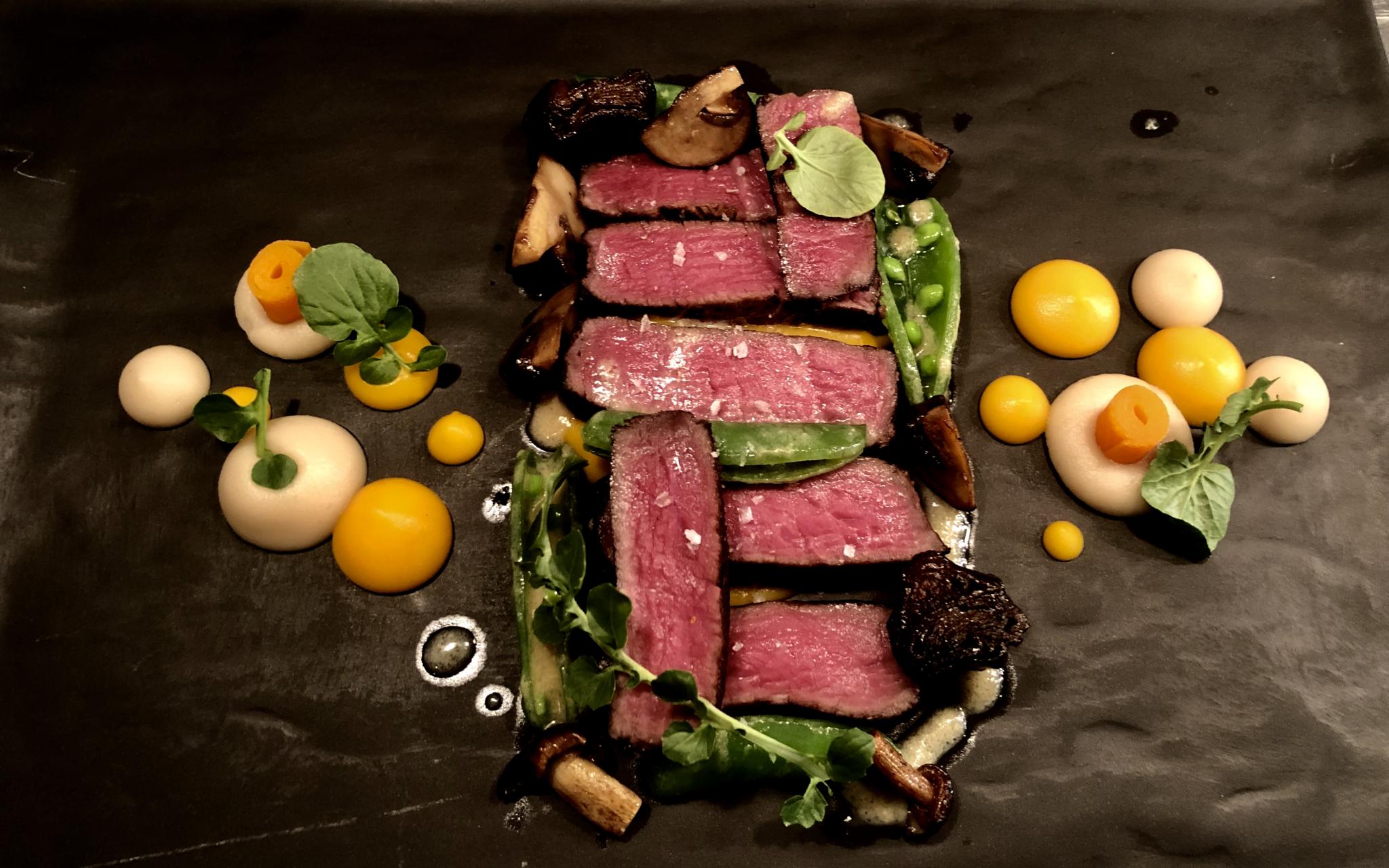 “It was very nice to have Michael here again,” says Fabián. “He looked really good, he had good energy and he enjoyed the food a lot, then he posed for a photo with us which is amazing and i’m very grateful to him for doing that.” 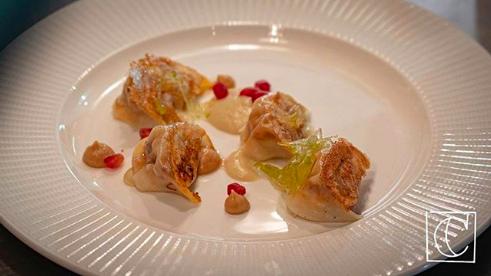 Fabián says he’s not phased by celebrity, but is well aware of the influence famous people can have. 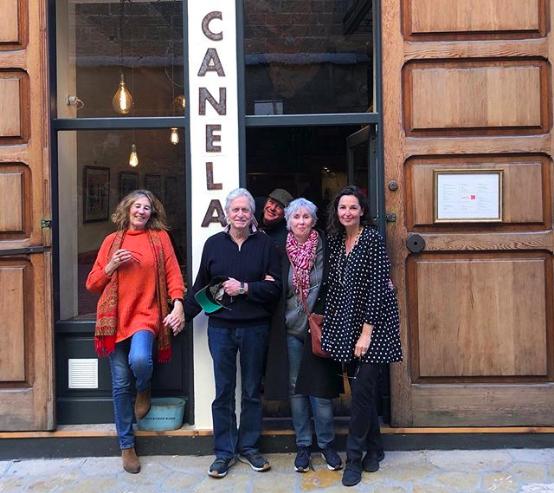 “I have always believed that you shouldn’t act differently around someone just because they’re famous, it just makes them uncomfortable and we are all just people, but it is amazing to have someone like Michael Douglas come to the restaurant,” he admits. “I never get nervous cooking for famous people, it makes me proud and happy to share my time and my food with people like Michael and hopefully it will persuade more people to come to Canela.” 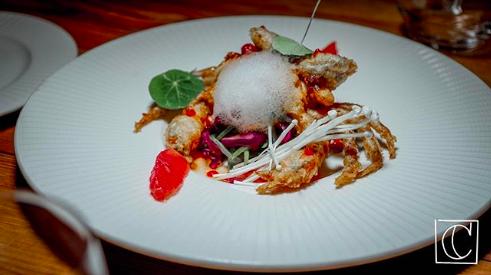 Fabián and Irene are planning big changes at the restaurant this year, which also means a change of hours. From April 13th Canela will be closed during the day and only open in the evenings from Monday to Saturday. 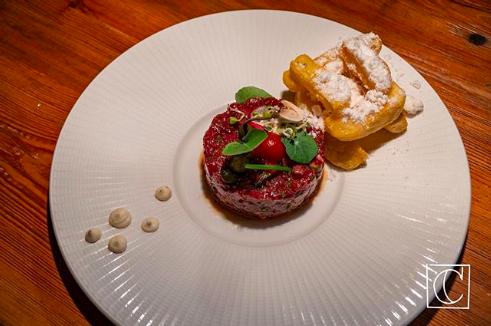 “During the day we want to do a Canela family-style takeaway for 6 people or more, so customers can order locally sourced, lamb or the duck or pork with all the Canela flavours and have it for lunch or dinner at their home, for events at Fincas or on yachts,” Irene informs me. “People are always telling us that they love the food here and wish they could take it home so we will cook it ready to eat and people will be able to pick it up from the restaurant.” 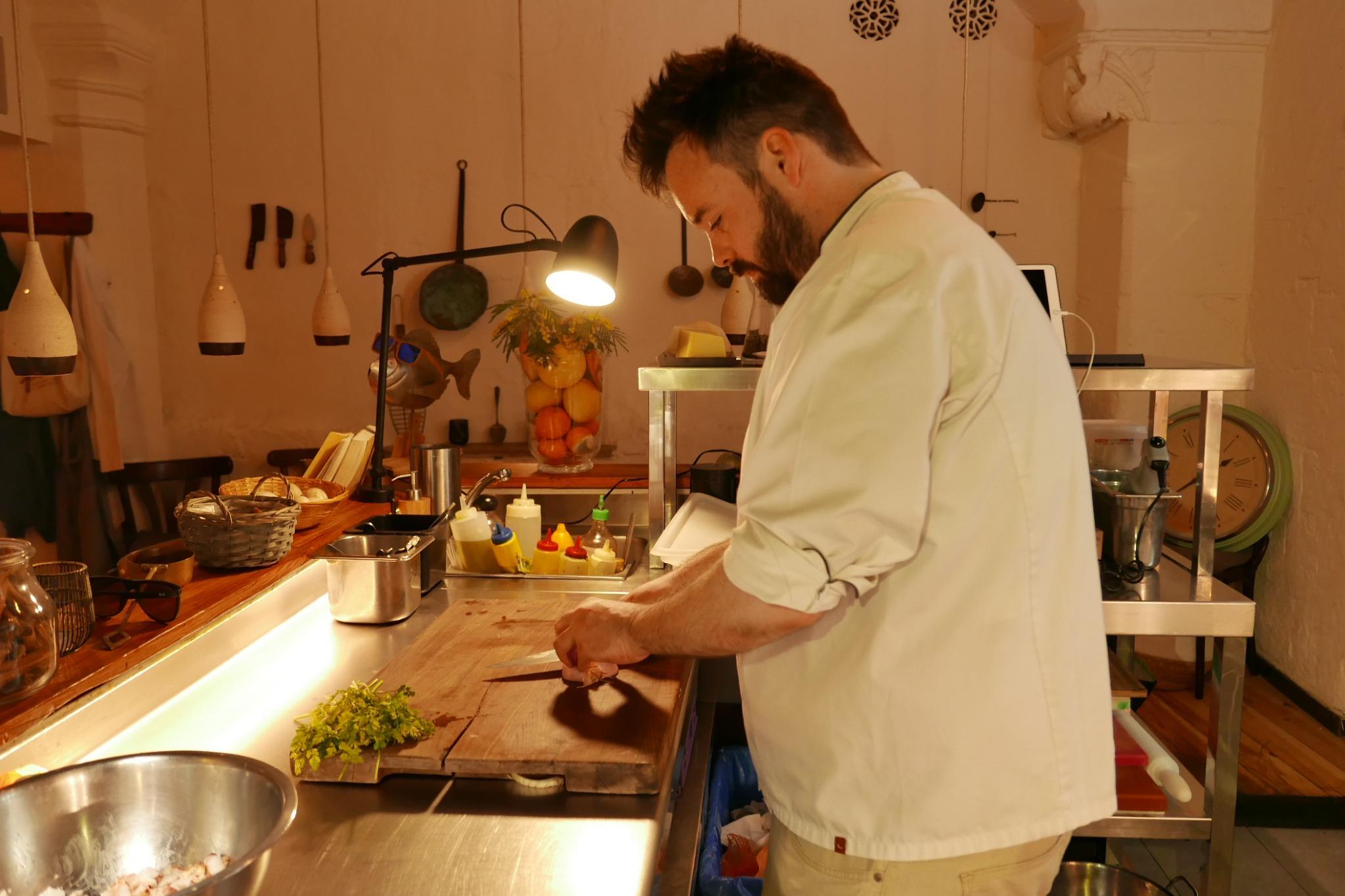 Canela is famous for it’s mouthwatering Mediterranean-Asian style food and Fabián says it was working in Amsterdam that sparked his interest in Asian cuisine and that Le Café Anglais in London really helped him hone his craft and get back to basics.

“I worked for a year or more with Rowley Leigh, who's a friend from Deya, from when he first opened Le Café Anglais in London and I loved it actually, because he brought me back to real food instead of, you know, fads like molecular food," says Fabián. "I also loved the way Rowley treated his ingredients, the amazing team he had and all the products he was using, for me it was one of the best experiences of working, ever.”

Fabián says he has a lot of respect for British chefs, especially Heston Blumenthal and Gordon Ramsay and hinted that fish and chips might just appear on the menu at Canela one of these days.

“You can do an amazing fish and chips,” he laughs.

For now, Fabián, Irene and the rest of the Canela team are very happy, they're super excited to be introducing a new family-style service and I did hear a whisper about plans for a Canela Cookbook. I for one, can't wait!