Lighthouses have been the subject of countless films and books over the years, including ‘Sex and Lucia’ and Jules Verne’s ‘The Lighthouse at the End of the World’.

There are 19,000 documented lighthouses worldwide, 187 of them are in Spain and 34 are in the Balearic Islands.

There are 13 in Majorca, according to Chema Lima, who has a degree in Labour Sciences and graduated with a Master's degree in History & Naval Heritage from the University of Murcia.

He dedicated 7 years to searching for lighthouses and has published all the data, photographs and stories in his blog, 'Los Faros Del Mundo’ which consists of more than 1,000 entries, including information about the ones in Majorca.

"Portopí lighthouse dates back to 1300, is the second oldest in Spain and the third oldest in the world. Its function was to make sure Palma was a safe haven, marking it and promoting it as a trade route, because the Balearics were very isolated. The lighthouse was a signal tower at a time when horizontal masts were raised to indicate the arrival and origin of ships.

The lighthouse used to be in the space now occupied by San Carlos Castle and its history appears in the codicil of the will of King Jaume II, but in 1617 it was moved to another location in the port.

“In the past the lighthouses were called pyres, synonymous with bonfires, and in the 2nd century, Majorcan thugs used them to attract ships to the coast, then looted them when they became shipwrecked,” says Lima.

Quite a lot is known about the lighthouses in Majorca, mostly because all of the Lighthouse Keepers kept log books.

"The first known record relating to a Lighthouse Keeper in Spain refers to Portopí when Berenguer de Isern appears in the payment accounts for 1310 for igniting the lighthouse between September to April.”

There used to be 14 lighthouses in Majorca but the La Riba one was deactivated and the other 13 are still in operation.

The Balearic Islands have the most lighthouses in the country and most of them were built between the middle of the 19th century and the beginning of the 20th century. The Punta de la Avanzada lighthouse in Pollensa was inaugurated in 1905 and La Creu del Puerto Soller lighthouse has been operational since May 30, 1944. 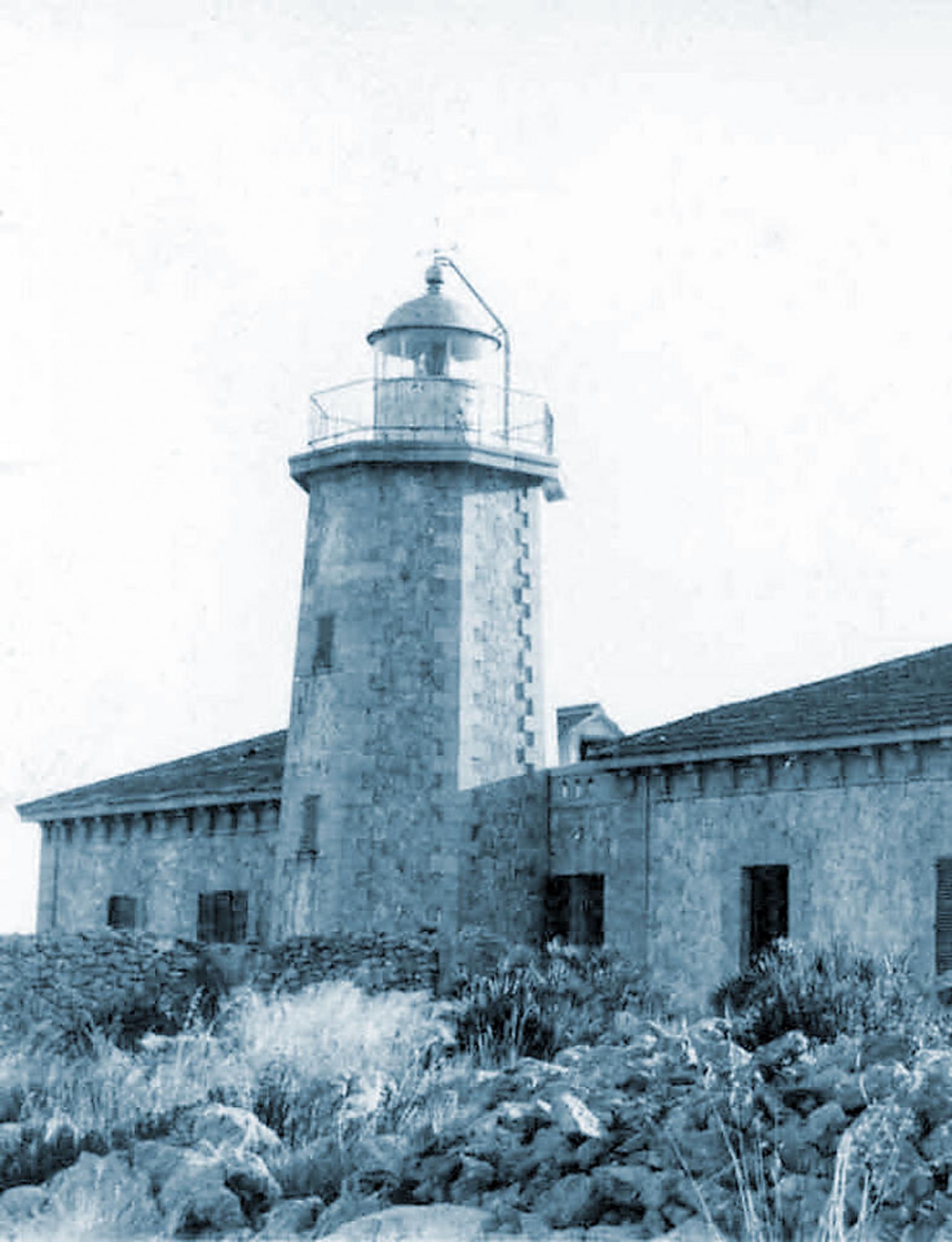 "Lighthouses have played a very important role in the history of mankind and they were initially built to take advantage of sea resources, then later to signal points of conflict in navigation,” says Lima, who confesses that, at times, he has spent 12 hours looking for information on 25 tabs at the same time.

His obsession with lighthouses also piqued his interest in the work of the Lighthouse Keepers.

"They were people with incredible fortitude and significant mental strength, whose role was to keep the light on even in adverse weather conditions,” says Chema Lima who also highlights the isolation the Fareros were subjected to.

"Under normal circumstances they got supplies once a week, but during adverse weather conditions they were forced to be self-sufficient for weeks or sometimes months.”

In Majorca, the Fareros had ovens to bake bread and some also had farm animals.

Lighthouse Keepers were known as Mechanical Technicians of Maritime Signals, from 1939, but technological advances gradually put them out of work and most Fareros became State Officials once their lighthouses were automated.

Here's a map of all the lighthouses in Majorca, details below. 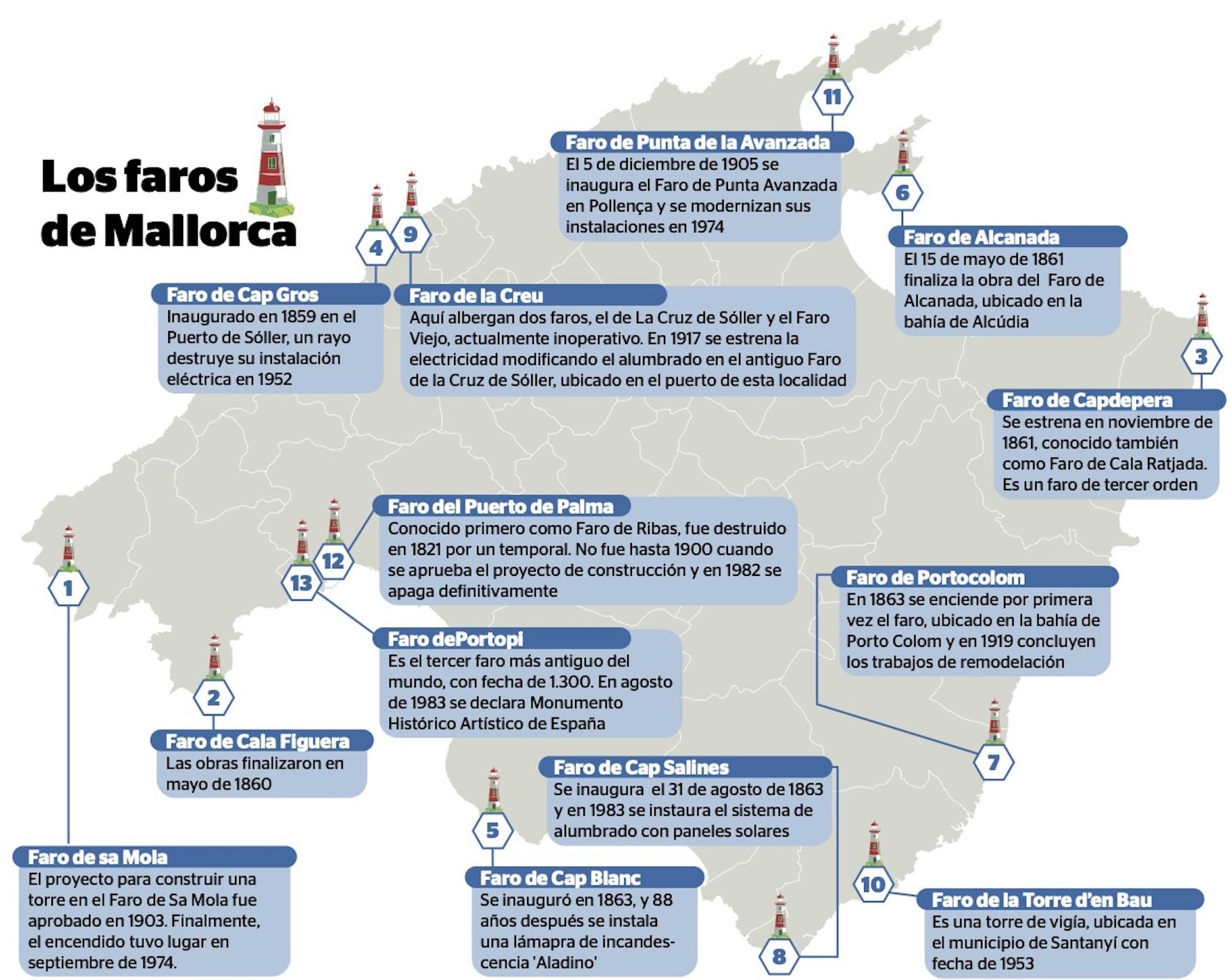 1. Faro de sa Mola
The project to build the Sa Mola Lighthouse was approved in 1903 and the lighting took place in September 1974.

3. Faro de Capdepera
Opened in November 1861 and is also known as the Cala Ratjada Lighthouse. It is a lighthouse of the 3rd order.

6. Faro de Alcanada
Work on the Alcanada Lighthouse in the Bay of Alcudia was completed on May 15, 1861.

7. Faro de Portocolom
The Portocolom Bay Lighthouse was lit for the first time in 1863 and remodelling work was completed in 1919.

9. Faro de la Creu
There are two lighthouses in Soller, the Cruz de Soller and the Old Lighthouse which is currently inoperative. In 1917, electricity was installed in la Cruz de Soller lighthouse in the Puerto Soller.

12. Faro del Puerto de Palma
Palma Port Lighthouse, which was first known as the Ribas lighthouse, was destroyed by a storm in 1821 by a storm, it was reconstructed in 1900 but has been out of operation since 1982.

13. Portopí Lighthouse
Portopí lighthouse dates back to 1300 and is the third oldest lighthouse in the world. In August 1983 it was declared a Historic Artistic Monument of Spain.

I was invited for the tour of the lighthouse historical museum, in the military area of Porto Pi. Truly interesting, as it literally covered the whole spectrum from olive and whale fat burning lights to modern ones and everything in between. I now also know why the tower next to the Porto Pi shopping centre, has a metre long, vertical slot in it. It was for a cable running across the water to the turret on the other (military) side, so sailing ships that had not paid, could not leave.

Torbjörn Dalnäs | over 2 years ago

Shine a light. Why is the magnificent Far de Formentor excluded?

kevin jackson | over 2 years ago