We’re struggling up front, 34-year-old Angel tries hard but it’s not the answer

Real Mallorca, in an error-strewn game, hit back well into injury time to earn a dramatic 95th minute draw against Elche in front of 13,000 ecstatic spectators on Sunday night. The result means that the Palma side have now gone four successive games without a win – 4 draws.

We started on a high note when veteran striker Angel Rodriguez’s well-placed shot was brilliantly kept out by Elche ’keeper Edgar Badia in the first five minutes.

Elche, who looked taller than us and definitely faster held their shape in the early encounters as Manolo Reina in the home goal barely had a touch. Elche got back into the game as the first 45 minutes drew to a close, and all the action seemed to take place in the middle of the pitch. Going in at the break the visitors looked to be more satisfied against a lacklustre Mallorca attack.

In the 62nd minute Baba (who wasn’t his usual impeccable self) hit a howitzer from distance, somehow Badia got a hand to it; the ball broke to Dani Rodriguez who passed to Angel. Somehow his header rolled agonisingly past the post – a golden opportunity missed.

By now coach Luis Garcia Plaza, from his private box high in the stand (after being red-carded in Cadiz and banned for two games), instructed his assistant in the technical area, Pedro Rostoll, to send on Fer Niño and Amath as we needed some fresh legs.

Then in the 67th minute disaster – Franco Russo, who’s been a brilliant stand-in centre back for Antonio Raillo, failed to clear his lines, opting to try and play out from the back instead of wellying it upfield. Elche’s Argentinian striker Lucas Boye gleefully accepted the stray pass, ran through and hammered home, 0-1.

Russo dropped to the pitch in anguish after the goal knowing full well that he’d made a costly mistake.

That disappointment for shocked home fans was short-lived because four minutes later we were back on level terms. The referee was very generous in giving us a penalty when Josema, who had just come on as a substitute, bundled over Maffeo in the 18 yard box.

With Elche players still revelling in their goal, and a very benevolent referee, Salva Sevilla’s accurate spot kick allowed the hosts to equalise, 1-1. Suddenly after a dull encounter all round, the game sprung into life – and some!

One thing Elche did look good at was counterattack, and in the 74th minute they punished some poor marking from Mallorca to score a second. Mojican broke through without opposition, squared the ball to Lucas Boye and he once again scored, 1-2. More had gone on in the last 10 minutes than in the rest of the match. 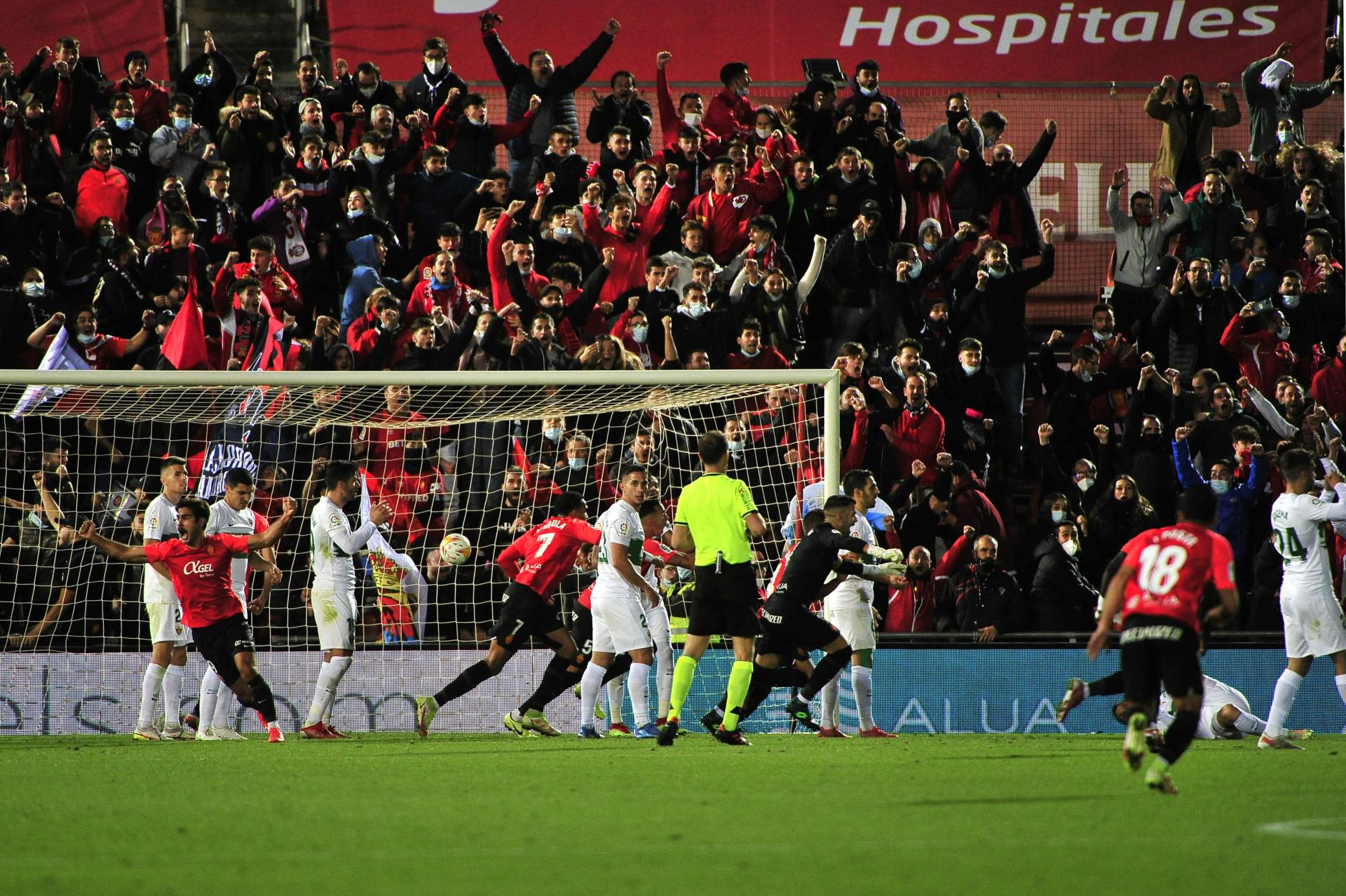 For the first time in a long time, Mallorca went into added-on time a goal down and the clock was ticking. In the 94th minute we won a corner kick down the left flank which even goalkeeper Manolo Reina came up for – panic stations!

Dani Rodriguez swung over the kick and somehow Pablo Maffeo rose in the night sky to bullet in a brilliant header. Mallorca had got out of jail and snatched a golden point to go into the international break in 13th place on 15 points.

SUMMING UP: At last the tables were turned as Mallorca managed to score a vital goal well into extra time.

In the middle of last season when promotion to La Liga looked a nailed-on certainty, Mallorca had the name of two potential striking options; one was Rafa Mir who was at Wolverhampton Wanderers and the other an unknown Argentinian attacker called Lucas Boye, who was banging them in for Elche.

Mallorca made contact with them with a view to purchasing his services but Elche immediately upped the buying price, so Mallorca withdrew their interest.

On Sunday night Mallorca found out the difference between having a centre forward who scores goals and having at least three strikers – who don’t.

We’re struggling up front, 34-year-old Angel tries hard but it’s not the answer.

He isn’t normally an out and out striker, preferring to play in the hole behind a number 9. He’s also at the age when playing 90 minutes in La Liga becomes difficult.

On Sunday night we failed to use the flanks enough, preferring to get bogged down in midfield.

This game for us was crying out for Lago Junior – someone to run at defenders. Sadly he never even got off the bench.

In defence we sorely missed our talisman Antonio Raillo who’ll be out until the New Year.

Baba didn’t have his best game and received his fifth yellow card, which means he’ll miss the next away game in Madrid against Rayo Vallecano on November 22nd.

Just when we all thought Mallorca were going down to a humiliating defeat, Pablo Maffeo headed in the equaliser in the 95th minute driving the stadium crazy.

Not only did we snatch a point, we also snatched two points from a direct rival. Not a great game by any stretch, but the last 10 minutes, pure adrenalin.