Football is a results business and six straight defeats has sadly seen his demise. | m.a. cañellas

RCD Mallorca announced on Tuesday that after 78 official games (29 in La Liga, 42 in La Segunda and seven in the Copa del Rey), their coach Luis Garcia Plaza’s contract was to be terminated after a series of bad results saw the team slip into the relegation bottom three. LGP took over in August 2020, leading the team back into top flight Spanish football in his first season in charge and left with a 45% win record.

Football is a results business and six straight defeats has sadly seen his demise. The team are 18th with 26 points, one adrift of Cadiz in the last survival position with nine games remaining. Next Saturday, April 2, we play away at Getafe and LGP’s replacement, 63-year-old Mexican-born Javier Aguirre, will be in charge. He signed on Thursday until the end of this season with an option to stay on if we avoid relegation.

When Luis Garcia Plaza arrived on the island, he had a difficult task in replacing Vicente Moreno (now at Espanyol) who had taken Mallorca to two promotions in two years. Ironically, Moreno’s the coach who’s ended up being LGP’s executioner after Espanyol beat us 1-0 last Sunday.

Last season we won automatic promotion with a record 82 points and conceding only 28 goals (now so far we’ve let in 49) and LGP leaves with his head high but under a cloud as he’s been unable to complete the job of rectifying our present precarious position. We’ve been stuck on 26 points since Valentine’s Day and the team has lost its identity and the signals being displayed on the pitch have made the chances of us beating the drop difficult – but not impossible. Conceding those 49 goals and only scoring 26 hasn’t helped the cause and it’s embarrassing that stats show our leading scorer is 38-year-old Salva Sevilla (who plays in midfield) with four (three of them penalties) ! 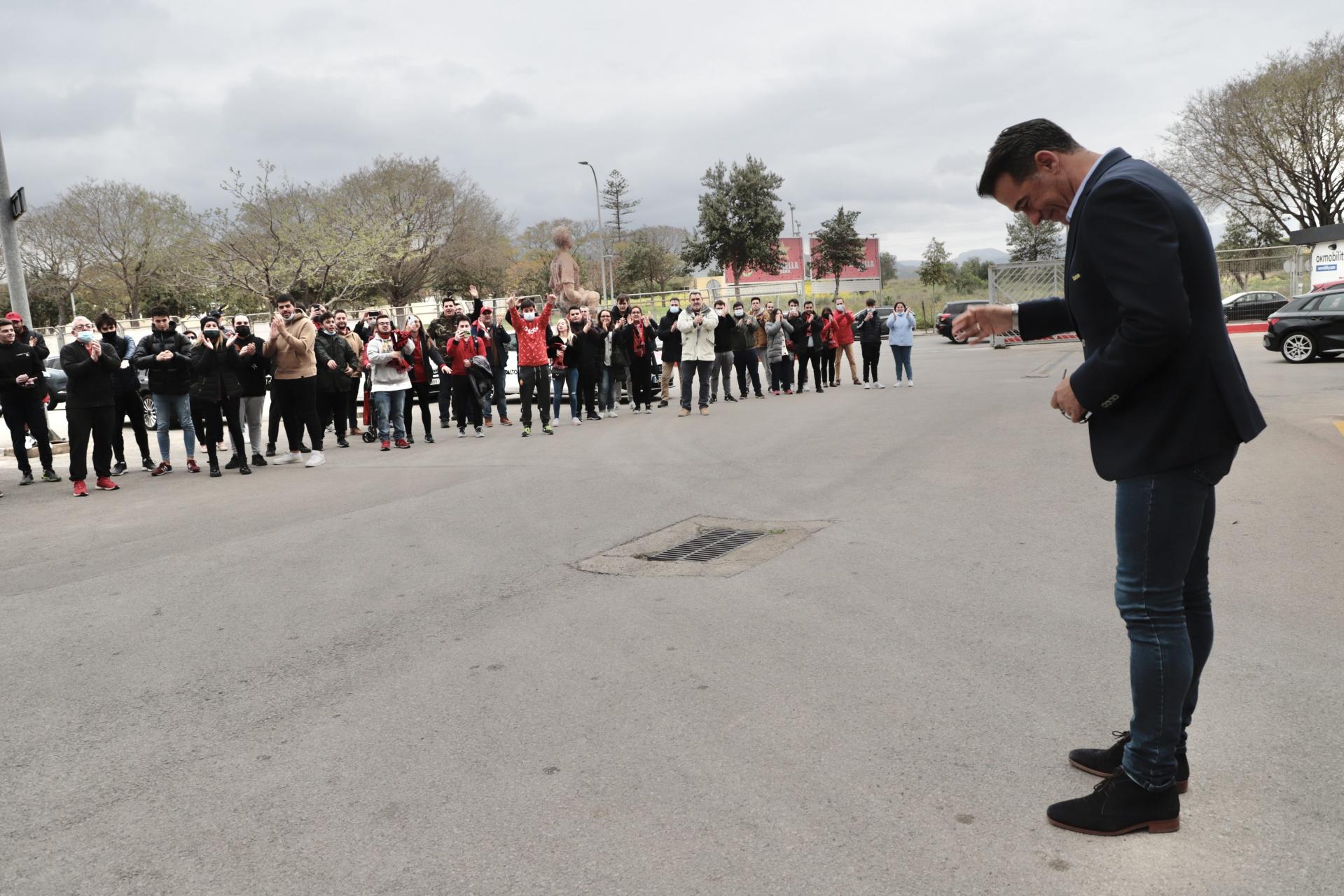 LGP allegedly didn’t find out about his dismissal until hours after everybody else, which he wasn’t too pleased about. A very emotional outgoing coach said goodbye on Wednesday, saying he didn’t know why he had been dismissed but “I have to accept it. Yesterday was a hard day for me and my family because I felt I was losing more than just a job.” He went on to say he’ll continue to live here “until my children’s school term is over.” He didn’t rule out going to the Son Moix as a fan to cheer on the team in one of their direct duels against other relegation-threatened sides. Between laughter and tears, he finished by saying “If one day the club needs me, I will always be there.”

As he reached the car park to drive home, dozens of Mallorquinistas were waiting for him to show their appreciation for what he’d done. In scenes that would have brought a tear to a glass eye, he thanked the fans for their support and accepted their touching gift of a special red Mallorca shirt from one of the peñas. Personally, I’ve never seen a departing Mallorca coach given such an emotional send off. Definitely one of the most popular managers ever to grace the technical area – we wish him well.

The club have gone for experience at the highest level in picking a replacement. Mexican Javier Aguirre, just a few weeks ago, was back home coaching Mexican side Monterrey. He’s managed over 400 games in Spanish football and most importantly specialises in rescuing teams from the edge of the relegation precipice. “El Vasco” as he’s nicknamed, played for and coached Osasuna for four years from 2002/06, taking them to a cup final and a place in the then UEFA cup. After that he moved to Atletico Madrid before taking the reins at Espanyol and Zaragoza, stopping both of them from being relegated. He’s also been coach to national sides – Mexico (twice), Japan and Egypt.

In 2019 he took over at struggling side Leganes who were bottom of La Liga with just five points. They finished the season in 18th with 36 points. At key moments before the end of the season he lost his two strikers, Martin Braithwaite to Barcelona and En-Nesyri to Sevilla. Leganes missed out on staying up by a single point.

Aguirres’ assistant is Mallorcan Toni Amor and they got to work on Thursday night preparing the team for next Saturday’s game. At his presentation on Thursday morning, Aguirre said “It’s not a desperate situation yet, we still have nine games to play and we’re only one point away from staying in La Liga.”

PS North Macedonia provided a major shock on Thursday night when they knocked Italy out of this year’s World Cup qualifying play-offs 0-1. Their brilliant long-distance winning goal was scored in extra time by a certain Aleksander Trajkovski who used to play for Real Mallorca and is now in Saudi Arabia. He hardly played here and couldn’t hit a cow’s jacksey with a banjo, but he has now become a national hero. It’s a funny old game !

Real and Barca search for momentum ahead of Clasico