As the La Liga relegation pendulum took another swing on Saturday afternoon, RCD Mallorca suffered one of their most embarrassing home defeats, losing to fellow relegation candidates Granada 2-6 in front of 18,466 shell-shocked fans.

The defeat now sees the Palma side tumble into the relegation bottom three, with just three games left to play. 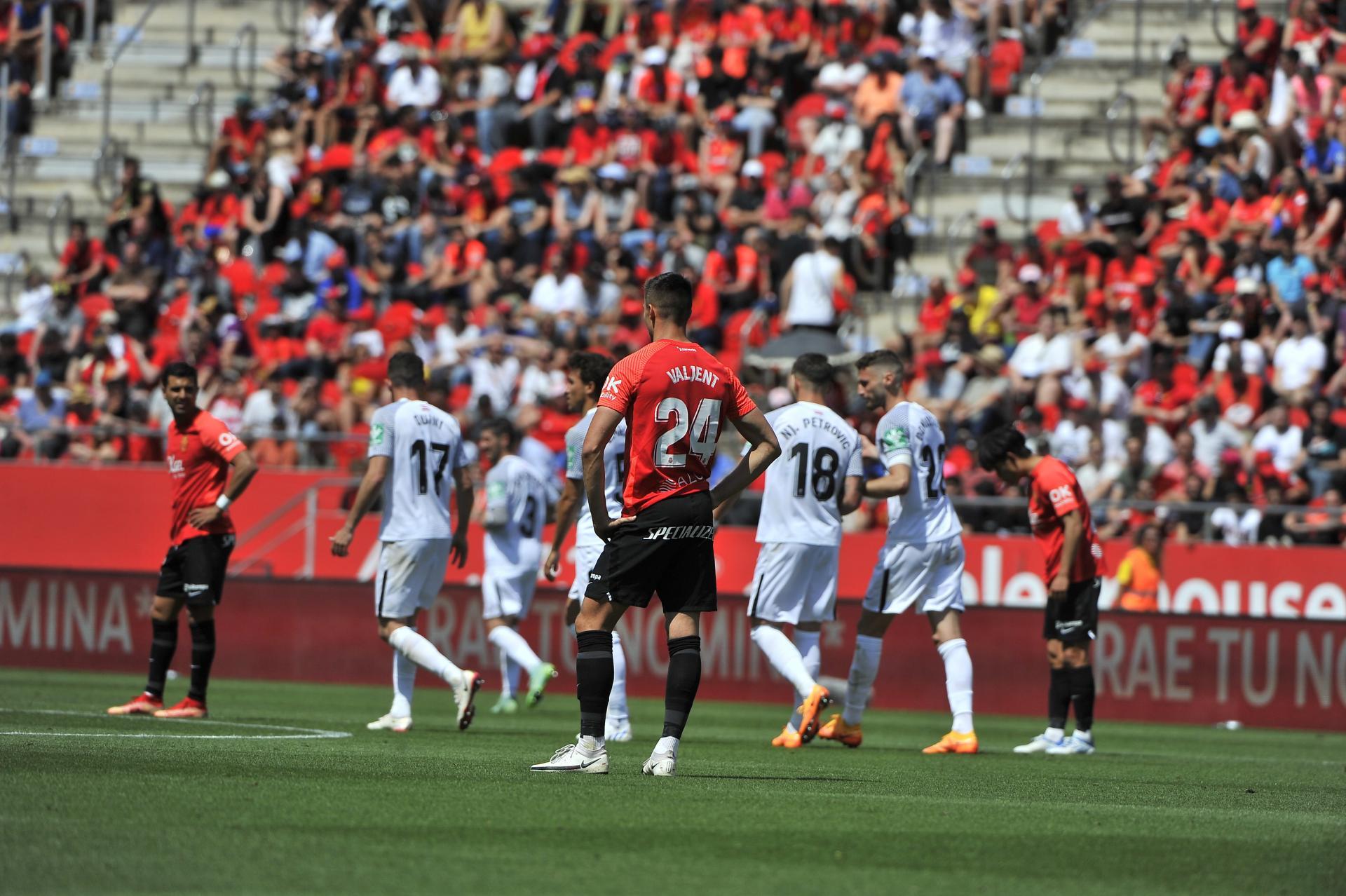 Things are not looking good for our survival chances with an away game on Wednesday 11th against Sevilla, then our last home game of the season (or very possibly our last in La Liga for a while) against Rayo Vallecano at 6:30pm next Sunday. Then it all comes to an end away in Pamplona against Osasuna the following weekend.

This game and the result was a travesty for Real Mallorca and especially their loyal supporters.

This was our game of the season, and the stage was set with beautiful weather, an almost full Son Moix, the place buzzing with flag-waving Mallorca fans singing the club song with gusto and really getting behind their team.

Once again the home supporters responded to the occasion for a vital game that required an extra dose of adrenaline. A win was a priority which would practically seal our participation in next season’s top flight Spanish football. A few hundred Granada fans were also present.

But it all came down to one of the most inept performances from the home side in their 106 year existence. We were made to look ridiculous by a team who terrorised our defence all afternoon. One of the images which I won’t forget for a long while was the sight of thousands of local fans exiting the ground long before the end – and they cannot be blamed, the team had let them down appallingly.

We showed on Saturday afternoon just how far away we are from competing with the best at this level. Failure is the responsibility of many as the team capitulated at the most crucial moment. There can be no excuses, no VAR was involved, there were no injury worries, and we had a crowd behind us who were up for it – what happened ? We bottled it big time, that’s what !

Our defence were terrible and we’ve now conceded 63 goals. We brought in a new goalkeeper on loan from PSG, Sergio Rico, during the Winter transfer window and he’s let in 30 goals in 15 games. His display on Saturday was shaky at best and he was to blame for at least two of the six goals.

He was whistled at by the crowd for long periods and will definitely not be here next season, no matter what league we’ll be playing in. Our midfield tried and failed to make any impression on the game and the number of balls that Baba in central midfield recovered could be counted on one hand.

Once again (old timer !) Salva Sevilla at 38 years old stood out and his rocket shot from distance in the 28th minute saw every man, woman and child in the Sol (Alta/Baja) stand rise to their feet to celebrate a world class goal. Salva is now our leading scorer with five !!! Granada had earlier stunned the home crowd with a third-minute goal which, after several attempts, was prodded over the line by Suarez.

When Salva equalised it looked like we were on our way back. He appears to be playing his last games as a Mallorca player because it looks like there is no intention to renew his present deal.

From that goal onwards, Mallorca took a step backwards. We gave the ball away far too often and our build-up was snail-paced. Three minutes before half time, our man of the match (by some distance), Pablo Maffeo, found the net but his effort was disallowed for off side.

The start of the second half was devastating for Mallorca and their fans as we saw the game slip-sliding away and probably their stay back in La Liga as well. We conceded two sloppy goals, the first an unbelievable lack of concentration one minute into the second period. Escudero sent the 300 travelling Granada fans into “doolally” land as our defence went to sleep. The goal was devastating for us Mallorquinistas and things got rapidly worse when Puertas back-heeled in the third. Silence fell over the Son Moix.

As the frenetic first fifteen minutes of the second half ticked away on the clock, our captain Antonio Raillo (who had one of the worst games at the heart of our defence I can remember) popped up in the Granada box to nod in our second.

Every time Granada pushed forward, they looked dangerous and they always seemed to have a man over. We failed to operate as a team with every move predictable. Muriqi upfront waited for most of the game for a decent ball to arrive and alongside him Abdon Prats just kept running from side to side. Take Kubo, played out of position, was a disaster as the game slipped away for Real Mallorca. We spent more time harassing the referee than the ball.

The match ended with a half empty stadium and the Luis Sitjar stand shouting out the name of Pablo Maffeo, who alongside Salva were our only players to be mentioned in despatches. Mallorca now await a footballing miracle, which very few expect to happen, as their La Liga existence hangs by a thread, but we still have a pulse!

Its done, they are down. Their rivals have easier games left and I predict Mallorca will finish bottom or next to bottom. This game was a 6 pointer. Win and we would be on 35 points and Granada on 31. But no they bottled it big time. I blame Sarver, he has spent no money and didn't learn from last time they were relegated. The difference this time is that there is NO WAY they get promoted for many years. There is no youth, structure, substance or willingness to spend money on players at the club. Mid table Segunda for 10 years is my prediction and that is all the owners deserve.