Riding in Majorca is on every cyclist's bucket list

It is no exaggeration to say that Majorca is cycling perfection, but don’t take my word for it. 2012 Tour de France winner, multiple Olympic champion, knight of the realm and all round dude Sir Bradley Wiggins described the island as “Scalextric set for cyclists”, and he is in good company. Multiple Grand Tour champion Chris Froome, the Team GB track cyclists, most of Europe’s top professional teams, and upwards of 150,000 cyclists of all abilities and ambitions join him in the cooler months from October to May to stretch their legs and pit themselves against the stunning scenery and deserted roads.

While Northern Europe shivers under leaden skies, endless rain and freezing conditions, two hours away by budget airline, Majorca is enjoying (mostly) clear blue skies, dry roads and daytime temperatures that rival Spring in more temperate climates. The island’s road network, designed to cope with the summer throngs of visitors, are all but empty in the winter, and in a stroke of genius, when the motorway network was being constructed, the authorities made the canny decision to leave the old routes in place, the result is a secondary road network of 675km with few users on four wheels.

The mixed geography of the island has again conspired to provide cyclists with scenery to match their ability, whatever your age or ambitions. 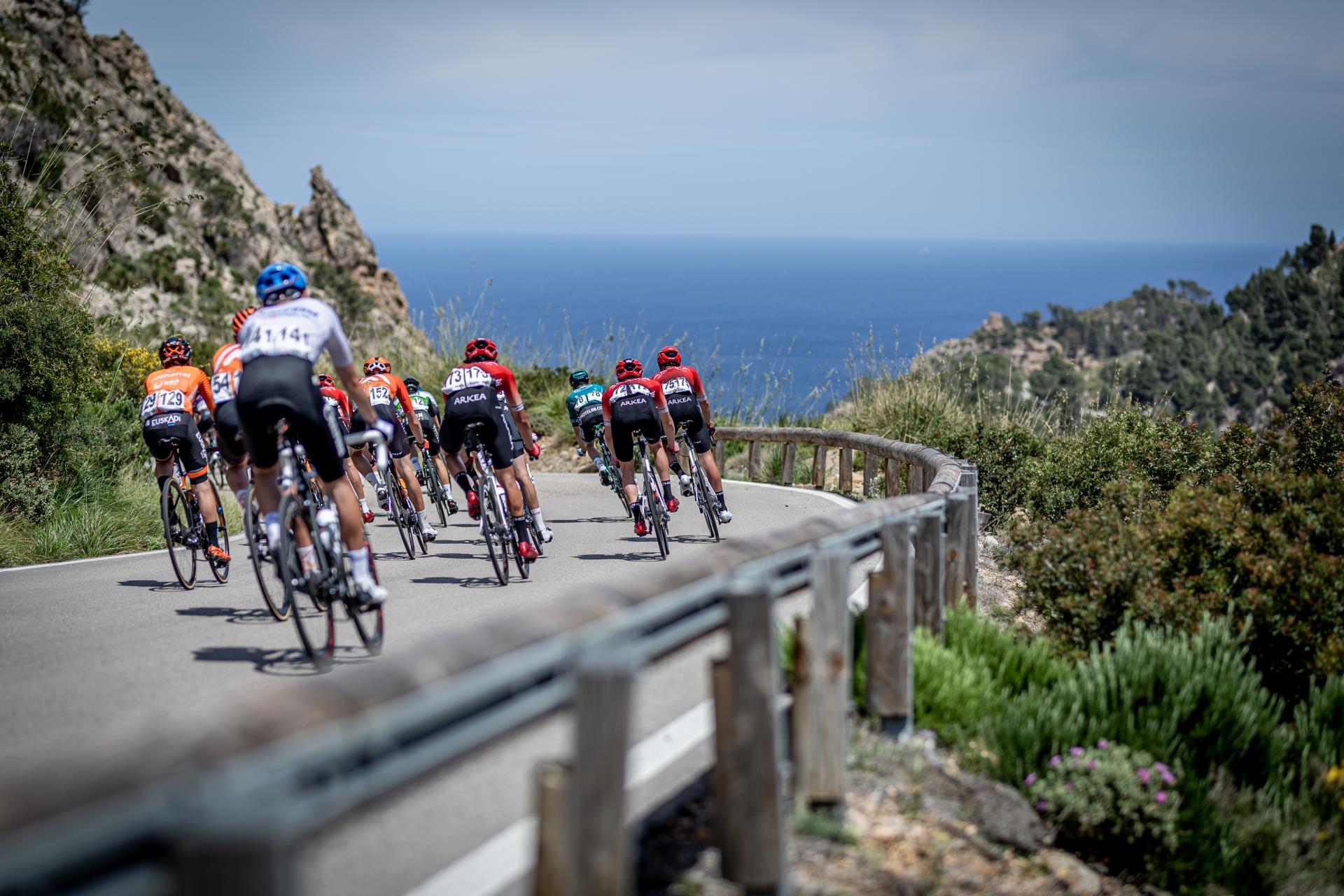 The Tramuntana mountain range stretching from Andratx on the Southwest tip, to Cap Formentor nearly 70km to the North, a UNESCO World heritage site since 2011, provides jaw dropping vistas of 1000 metre plus peaks dropping to the azure Mediterranean in a matter of a few kilometres peppered with chocolate box pretty villages with babbling mountain streams. They also present some of the best training in Europe with hairpins and switchback routes with gradients to match those of the Alps, Dolomites or Pyrenees.

Many of the professionals and spirited amateurs test themselves against the legendary Sa Calobra in the mountain municipality of Escorca. This is a fearsome white knuckle 10km descent through eerie rocky monoliths (Karstic limestone if you are interested) as the serpentine road picks out a path down to sea level through 26 hairpin turns down 668 meters at an average 7.1% gradient. Whilst you are down there you might want to fortify yourself with a coffee and admire the point where the torrent de Pareis, a deep canyon that drains the island’s highest mountain, Puig Mayor, into the sea.

The only way out is back the way you came, only much slower. Also worthy of mention in the Tramuntana is the trek from Puerto Pollensa to the northernmost point of Majorca, the lighthouse at Formentor. This is another one for the fit and fearless as the climbs and descents are tough and nerve jangling in equal measure, but don’t forget to look up every once in a while, views don’t get a great deal better than this, oh and keep a look out behind you as well as this is a favourite of Team Ineos as they treat this as an after breakfast leg stretcher from their winter base in nearby Alcudia.

If you fancy something a little more genteel, then head for the centre of the island, Es Pla, the fertile agricultural central plain is pancake flat, with the occasional outcrop of rolling terrain, the quiet road network picks out pretty trails amongst the dry stone walls and fields of sheep with clanking bells around their necks. If you time your visit for early February then you will be treated to the explosion of colour as the island’s almond trees blossom in pink and white above meadows of wildflowers as spring takes hold. 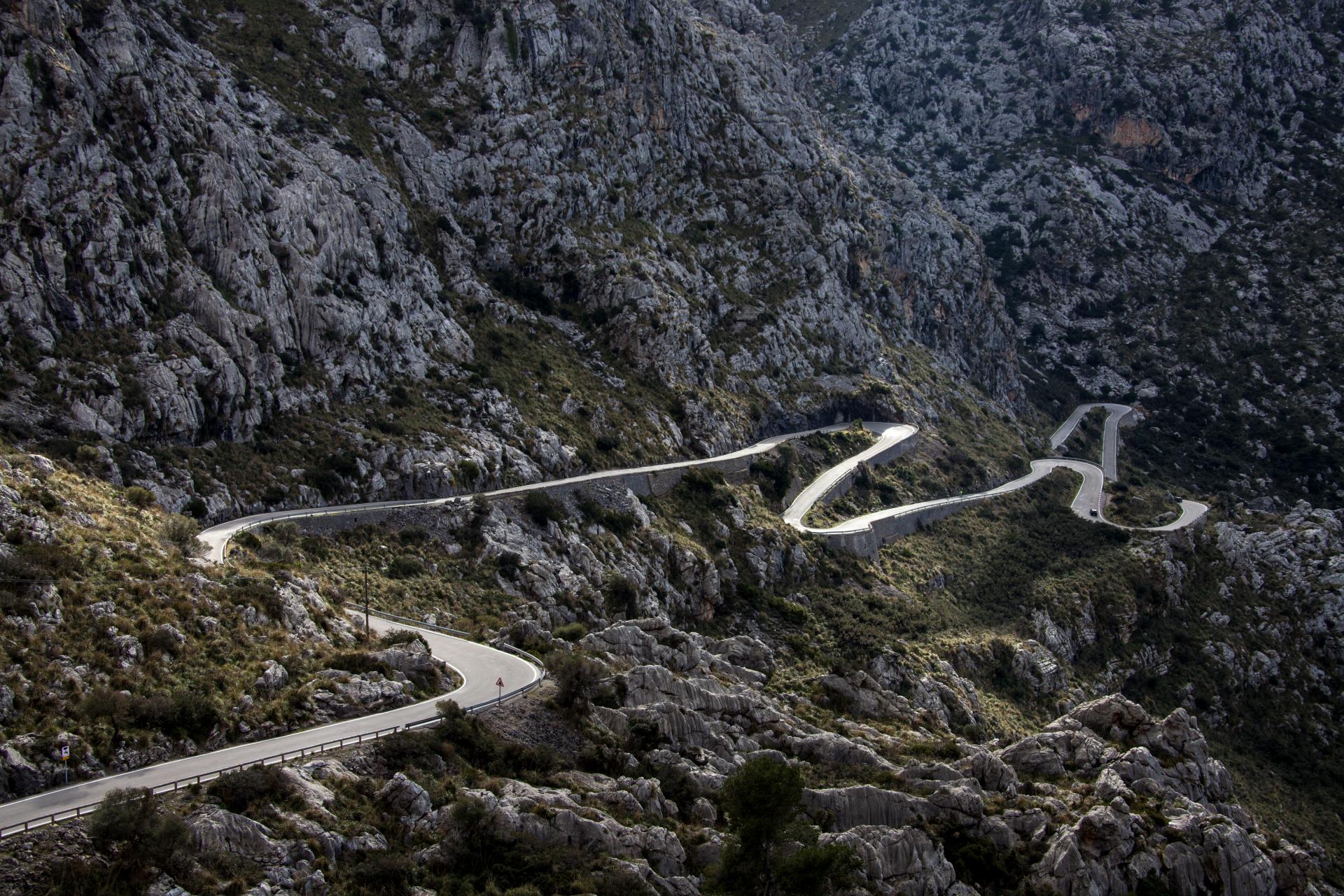 There is varied cycling and accommodation available in most corners of the island, but the centre of the activity are the Northern resorts of Pollenca and Alcudia as they offer instant access to the mountains or the plains straight from your hotel door. Accommodation also varies across the island according to your taste and the depth of your pockets. Out of season tourist hotels offer great value and convenience, many now providing secure storage for your precious steed and on-site bike mechanics. For a touch of luxury the four and five star rural hotels will treat you like royalty, and often provide top notch spa facilities, a site for sore...err...legs, after a day in the mountains.

The support network for cyclists is second to none as well, seasonal ‘pop up’ bike shops do exactly that in Pollenca and Alcudia, and if you don’t fancy the expense of shipping your bike here, then there are many professionally oriented shops that will rent you the latest carbon fibre rig for the week, and make sure it fits you perfectly, as well as acting as expert local guides.

While it is easy to design your own itinerary for a visit to Majorca, there are a variety of specialist cycling companies who will do the lot for you, from flights to accommodation, bike rental and guided rides. 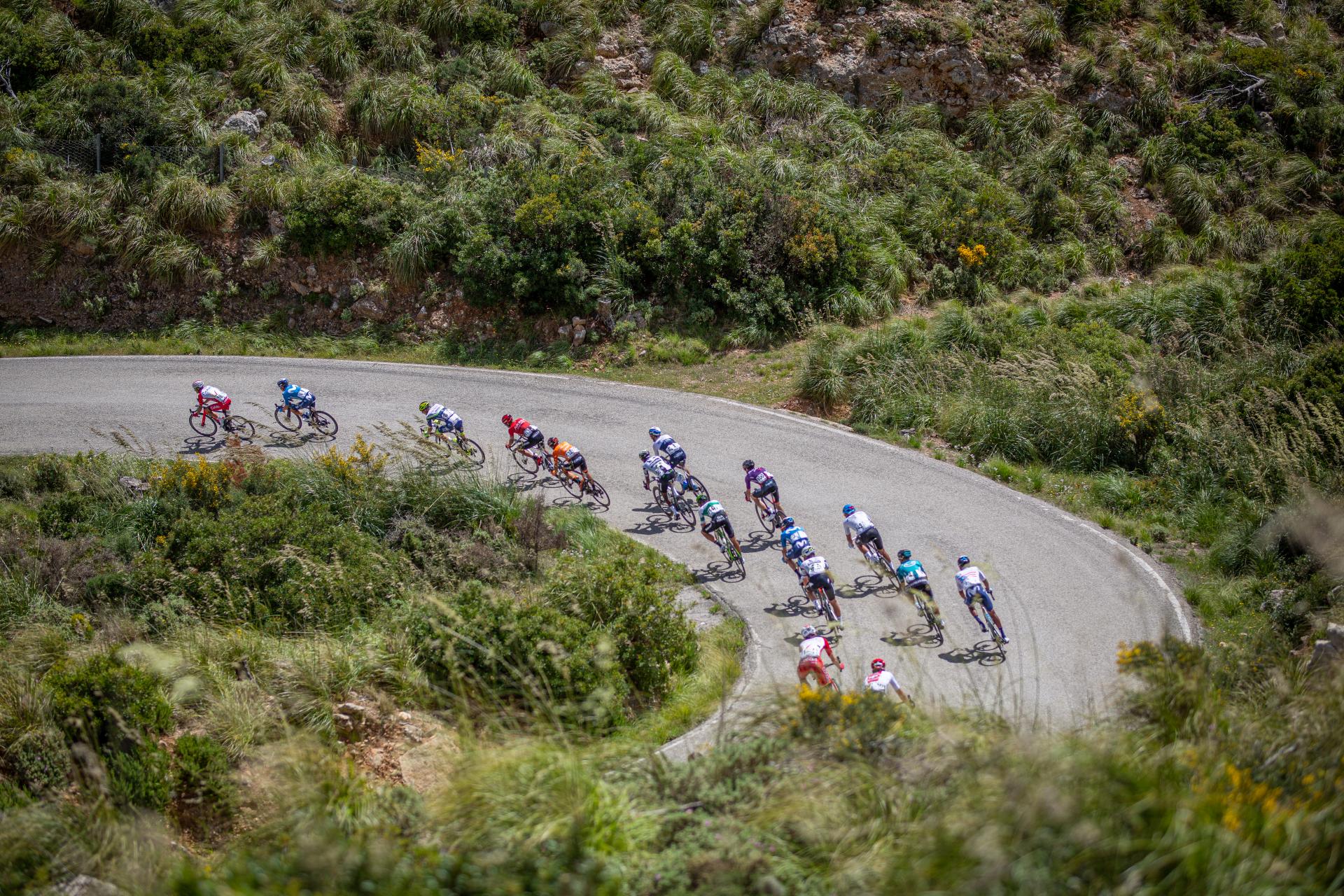 The island also stages a number of sportives, gran fondos or cicloturistas during the springtime, these are massed rides often of hundreds run under police escort to ensure safety and enjoyment for all. The biggest draw of all is the relatively new, but already legendary Mallorca 312. Europe’s longest such ride, and with a maximum participation of 8,000 one of the largest. Back in autumn 2021 after a two year Covid enforced hiatus it is scheduled to move back to it’s traditional spot in April next year. With routes from 167km, 225km, and the 312 full monty, it’s not quite for all abilities, it’s tough whichever distance you choose, but a challenging ride in stunning scenery with a lot of lycra clad company is guaranteed, but sign up fast, places get snapped up quickly.

If you fancy catching the professionals in action, make sure you are here for late January as the sport’s big names, and big teams take part in the European season opening races around the island in the Challenge Mallorca trophy races over four days.

If you are a nine stone, leg shaving road warrior, a family looking for a low season activity break, or a MAMIL (middle aged man in lycra) who dug his old bike out of the shed after the Olympics, Majorca can provide exactly the challenge you are after.

Cycling is the new golf they say, and Majorca does it here better than anywhere. The island also does golf as well, but that’s a story for another day.