Spain is a big producer of peaches, in third place behind Italy and France.

The hot weather brings an abundance of lovely herbs and also a superb variety of luscious fruits. Some of the fruits, figs are a good example, have a short season and we have only a few weeks to enjoy them. But the peach is on market stalls as early as May and as late as October, so we have loads of time to taste them at their best.

The peach is one of the most sensual fruits, with curves and skin tones that remind of the finer parts of the female anatomy. The great Impressionist Auguste Renoir used to tell students the best way to learn to paint the female breast was to practise with a bowl of peaches. The peach has such gorgeous curves and attractive colours that the word has come to mean someone or something of extreme beauty.

“She’s a peach of a girl” is a phrase we would use only of someone whose looks are approaching perfection. Peaches are native to China although their botanical name, Prunus persica, suggests they came from Persia. But the peach went from China to India and from there to Persia, from where it was taken to Greece after the battle of Marathon in 490BC.

From Greece it went to Rome and because the Romans thought it had come from Persia, they called it Prunus persica. And that botanical name stuck. Our word peach, the French pêche and the Portuguese pêssago, are derived from the Greek word for Persia.

The peach is the most widely cultivated fruit after the apple and there are more than 2,000 varieties worldwide. Spain is a big producer, in third place behind Italy and France. Peaches have attracted the attention of cooks over the centuries and there are plenty of sweet and savoury recipes in which they have a major role. 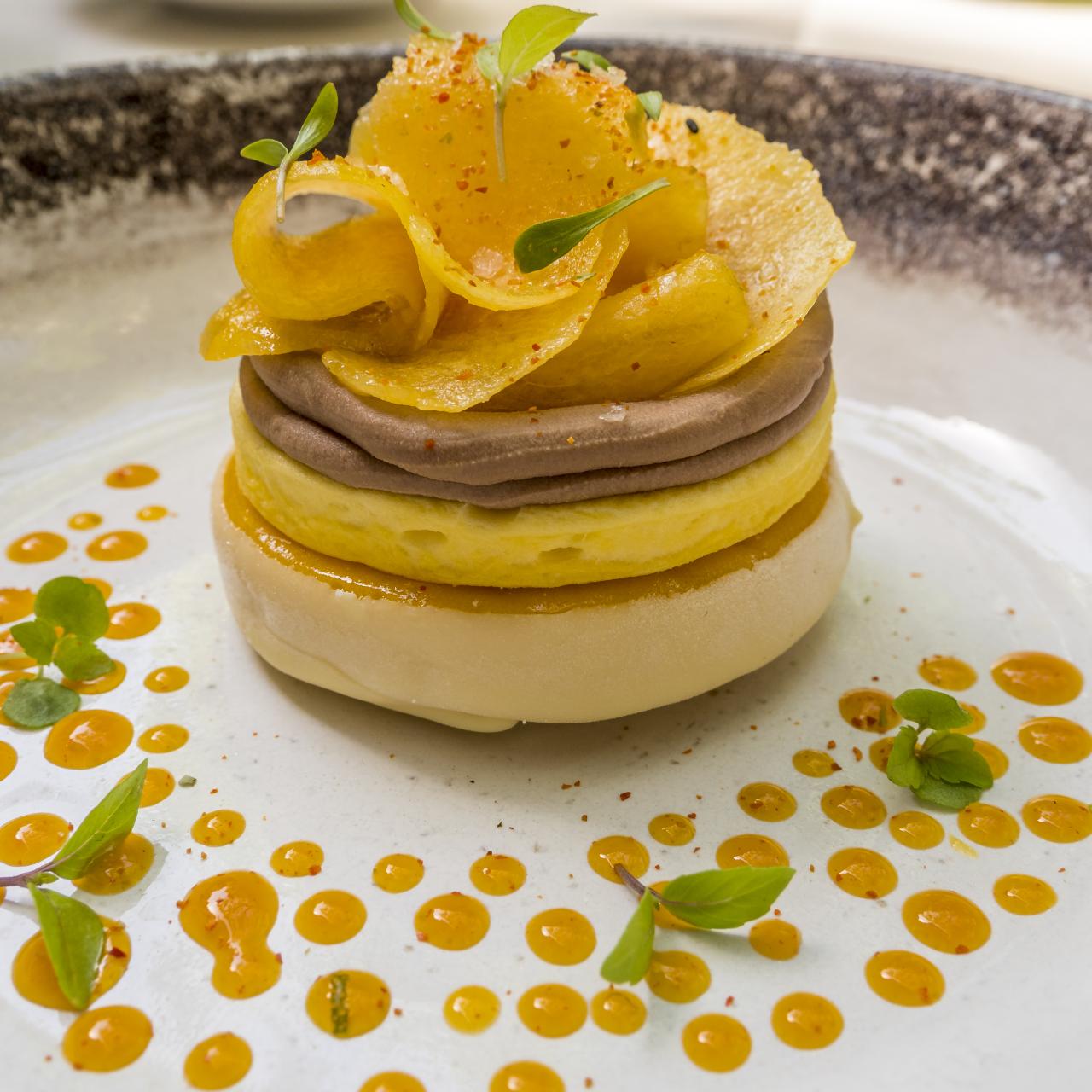 Sliced peaches are successfully added to chicken casseroles and they also make an interesting sauce for chicken and other poultry. You can make a sauce for roast chicken by sautéing a finely chopped large onion in a suitable shallow pan. When the onions are turning golden, deglaze with two tablespoons of good wine vinegar. When this has almost evaporated, add 150 mls of chicken stock, 125 mls dry white wine or sherry, and two tablespoons of port or madeira. Bring this mixture to a simmer and add the sliced peeled peaches. As soon as they are tender, reserve a few of those slices that have kept their shape for use as a final garnish.
Taste the sauce to see if it is strong enough (it should be quite concentrated) and if necessary reduce it a little more. When it is to your liking, blitz in a blender.
Return the sauce to the washed out pan and add salt to taste and pinches of pepper and sugar. Add six tablespoons of cream, or beat in a couple of tablespoons of unsalted butter.
Finally, carve the chicken, arrange the joints and slices on a flattish oval or rectangular serving dish and nap them with the sauce. Decorate the surface with the reserved slices of peach.

A Catalán dish calls for halves of peaches to be poached in a similar sauce as above and served with a carved guinea fowl — called pintada in Spanish and available at El Corte Inglés in the autumn.
The halves of ripe peaches are simmered in the sauce for only eight minutes before being served round the carved bird.

You could use halves of ripe peaches in a chicken stew or casserole, always being sure to simmer the peaches for only eight minutes so they keep their shape and texture. Mallorcans are very fond of one of the simplest of desserts I have ever come across: sliced ripe peaches in a good red wine.

The beauty of this dish is that it’s a tabletop DIY dessert: the cook doesn’t intervene except to provide the peaches, the wine and quite large glasses. This is a popular impromptu dessert for an informal summer luncheon when ripe peaches are on the table, as well as a good red wine costing around €10…or more if your budget runs to it.

Good desserts seldom come as easy as this. You cut up a peach and let the slices, not too thick, drop into your glass of red wine…it doesn’t work as well with dry white wine.

The thinnish slices are stirred around in the glass, left for a few minutes and then retrieved and eaten with a fork or a spoon. The wine is sipped between nibbles of the fruit. You can use large plums, paraguayas and pears, so it is a most pleasant way of having fruit for dessert on a hot day, especially if you are outdoors and in the shade.

But I repeat that the peaches must be ripe and fragrant and the wine should be a reasonably good one. It works very nicely with a young Ribera del Duero costing €5-€8. They take this idea a step further in Murcia by pouring a bottle of red wine into a wide serving bowl, then adding short pieces of cinnamon stick to taste and slivers of lemon rind. The peaches are peeled, sliced and added to the bowl, which is left in the fridge for about three hours before serving.

They have a similar dish in Navarra where they prefer to heat the wine before adding it to the peaches. For 10 peaches, use a bottle goodish red wine, eight heaped tablespoons of sugar, two tablespoons of brandy and a few pieces of stick cinnamon. All the ingredients, except the peaches, are put into a suitable saucepan, brought to the boil, and simmered for about 15 minutes. The pan is taken off the heat and the peaches are added immediately. When the wine and fruit cool down they are refrigerated for about three hours or so and then served.

A more elaborate but still easy dessert is the Italian one with a French name: pêches à la Fenice.
Large peaches are peeled, halved, stoned and poached in a syrup of sugar and water. When tender they are left to cool down and the cavities are filled with fresh raspberries and sprinkled with sugar and slivered almonds. Just before serving, warmed brandy is poured over each peach half and ignited.
This dish is named after the Fenice theatre in Venice, opposite which are several cafés noted for their version of this dessert.