The not so drab looking Gadwall

S'Illot waterworks near the Albufera is a good place to see Gadwall. | Neville James-Davies

Often overlooked as a drab looking duck, the resident Gadwall actually has lovely fine markings when seen close up. Found all over the island where there is water, this lovely duck forms groups where they feed together, and even during the breeding time they are not fussy about being in groups together. They are one species of duck that seem to tolerate each other quite well, as opposed to say Mallards which can be quite quarrelsome.

Outside of the breeding season (August to April) they form flocks where identification of the females is much easier. The male utters a nasal ‘mairr’ whereas the female gives a simple quiet ‘quack’. They are a chunky duck weighing 600 – 900g with a length of 45 – 55cm and a wingspan of 85 – 95cm. They breed on wetlands with open water and in the winter they will also frequent lakes and marshes. The Albufera and Albufereta Marshes, S’Illot waterworks, Tucan marsh and the salt pans (Sallinas de Llevante) are good places to see them. They nest on the ground beside water where 8 – 12 pale pink eggs are laid. Food consists of seeds, plants and insects.

At first glance they can appear quite a drab looking duck, but take some time to look at the male in particular who has lovely markings. The adult male has a dark grey bill and head with a buffish-grey neck and back with a black stern. The female looks like a female Mallard with a yellow bill and brown plumage. The juvenile resembles a dull-coloured adult female. The young birds are fed insects at first, and the adults also eat some Molluscs and insects during the nesting season. The Gadwall is one of the species to which the Agreement on the Conservation of African-Eurasian Migratory Water birds (AEWA) applies. When swimming, both sexes are easily identified as they reveal a flash of a white speculum. In flight the white is particularly evident and is a good identification feature even from a distance contrasting with a white underwing.

A little more about the Gadwall 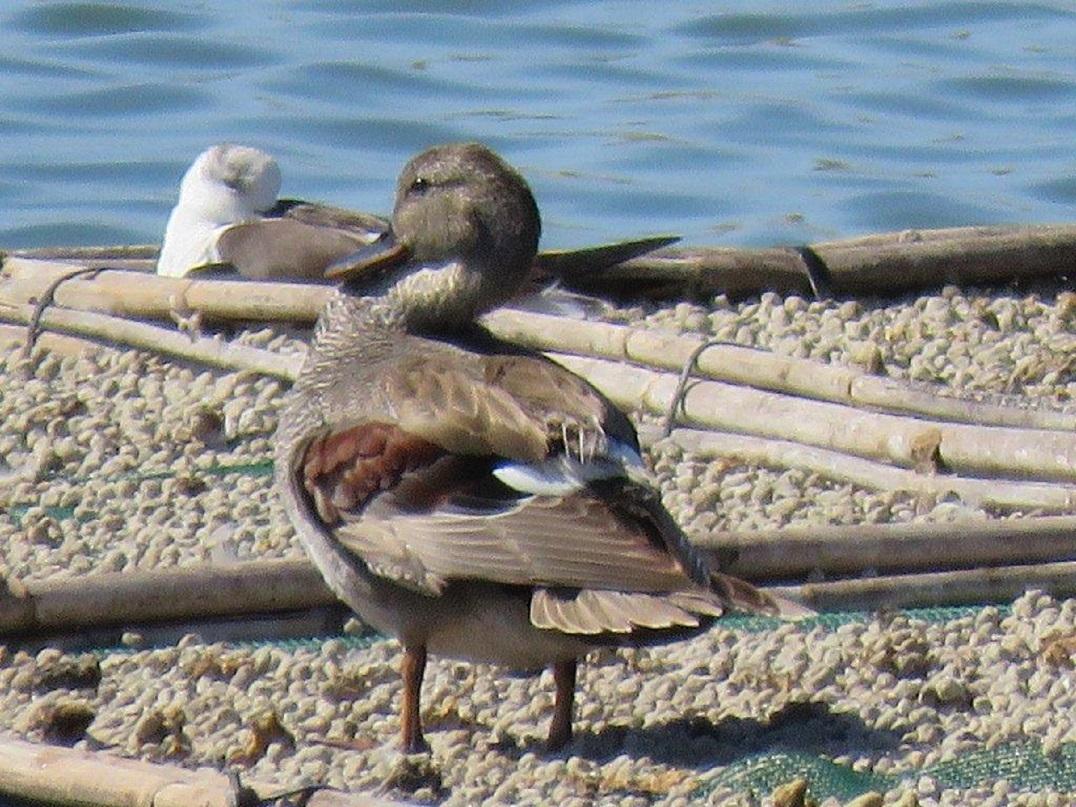 The Gadwall was first described by Linnaeus in 1758 in his Systema Naturae. DNA studies have shown that it is a sister species with the Falcated Duck and the two are closely related to the Wigeons. Both are assigned to the genus Mareca. There are also two subspecies. The male is slightly larger than the female, weighing on average 990g (35 oz) against her 850g (30 oz). In non-breeding (eclipse) plumage, the drake looks more like the female, but retains the male wing pattern, and is usually greyer above and has less orange on the bill.