Recently there have been some lovely sunsets from the magical island of Majorca, and over the years I too have enjoyed sunsets and sunrises, as watching nature can literally have you out and about at all hours. For me, there is one section of coastline that sees one of the most enjoyable strolls along a section of beach which is abundant with life – Puerto Pollensa to Albufereta. At the edge of Puerto Pollensa lies the roundabout leading down towards Llenaire and Gotmar, and it is from this section on the coast road that I like to walk up to the bridge over the widest part of the coast road – just before the little row of houses at the start of the Albufereta Marsh.

Not only is there always the sounds of the waves lapping up onto the soft sand and the clear salt air, but there is always that feeling of serenity – the sounds of nature from the waves to the call of the birds. Plants along this section from the spring to late autumn include the bright yellow flowers of Yellow-horned Poppy and the deep reds of Common Poppies, to the delicate blues of Sea Lavender to the pinks of the Sea Bindweed. Sea Mallow shares the same space with Rock Rose and Sea Stock.

Now, all of us who have ever walked the coastline of Majorca will have noticed thousands of round brown balls of varying sizes. Some will have found these hard to walk on; others like me (and probably the majority of us) will have kicked them and played with them as we walk through the dense mass. This is actually the remains of a grass – specifically, Neptune Grass. They are the leaves that have been ripped off by wave action and rolled into balls along with the rhizomes of the leaf remains. They are a perennial submerged water plant. I love seeing these fist-sized balls along the beach which have an air of mystery about them – probably more so from the name Neptune Grass.

On some days, the waves can be quite strong, lashing onto the beach and creating sea-spray. Yet on other occasions, the bay of Puerto Pollensa, looking towards Alcudia, can be like a mirror, and it on one such occasion when a group of Greater Flamingo’s crossed the Bay, their pink colours reflecting off the water as they drifted past, what a spectacular sight that was. At other times I have stood gazing out over the expanse of water and seen a Marsh Harrier coming in, fresh from its migration and no doubt about to land somewhere in the Albufereta Reserve behind me. 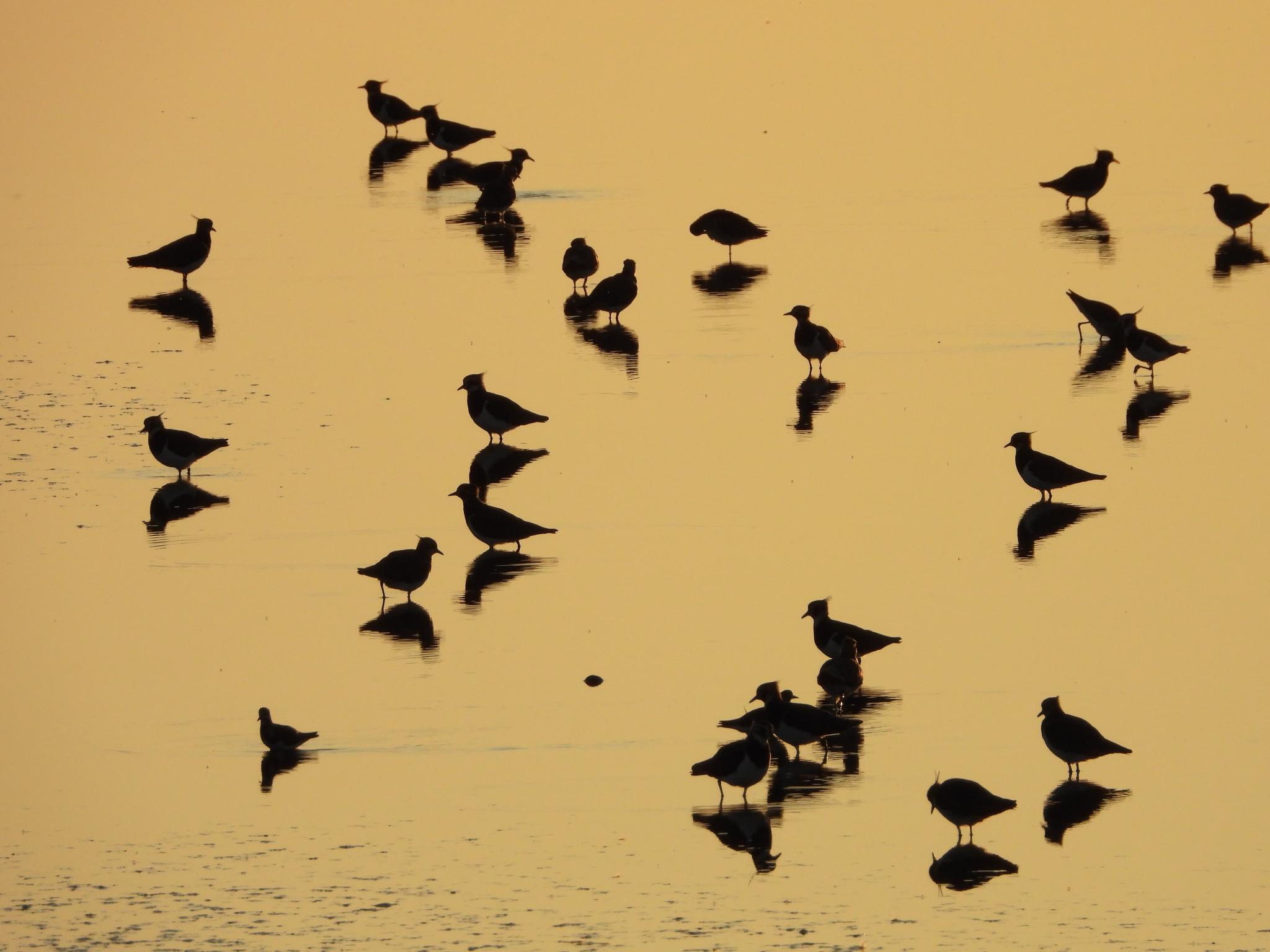 In the soft sand you will often see little prints leading off in every direction, left behind by a variety of birds. More obvious will be those of the Grey Heron and Mallard, with the prints of Yellow-legged and Audouin’s Gulls also standing out, but here and there are the much smaller wader prints, from the larger waders that frequent the beach edges such as Common Redshank, Greenshank and Common Sandpiper, to the smaller wader such as Sanderling, Ringed Plover and Kentish Plover. Occasionally, Cormorants will be resting on the edge of the beach or on exposed rocks, their wings outstretched to dry off after time spent diving for food. Now and then I have come across the mummified corpse of a bird or mammal that has succumbed to a final end. Death for some means a food source for others – and the local gulls never miss such an opportunity.

Sunsets and sunrises evoke a sense of calm, where dawn signifies a new fresh day with the wonders of what lies ahead, and where people and nature slowly wake up to embrace the day ahead, to a sunset that signifies a day well spent, where the world is slowly winding down, and where people and nature prepare to sleep only to repeat the cycle the following morning. But the coastline is not always the place you want to be at certain times of the year. A few December’s ago I was watching Cory’s and Balearic Shearwaters, Gannets and Sandwich Terns off Far de Cap Ses Sallines, when the sky turned a miserable grey and the wind picked up. I continued scanning out at sea through my telescope, checking some birds crossing left to right on the horizon, when I suddenly looked up to see not that far away off shore, a small twister that was almost touching the surface of the sea. That gave me a shock, and reminded me that Mother Nature calls the shots wherever you are. One little resident wader always entertains me along this stretch of the coastline however, and guarantees close views – the Ringed Plover, my chosen bird of the week. 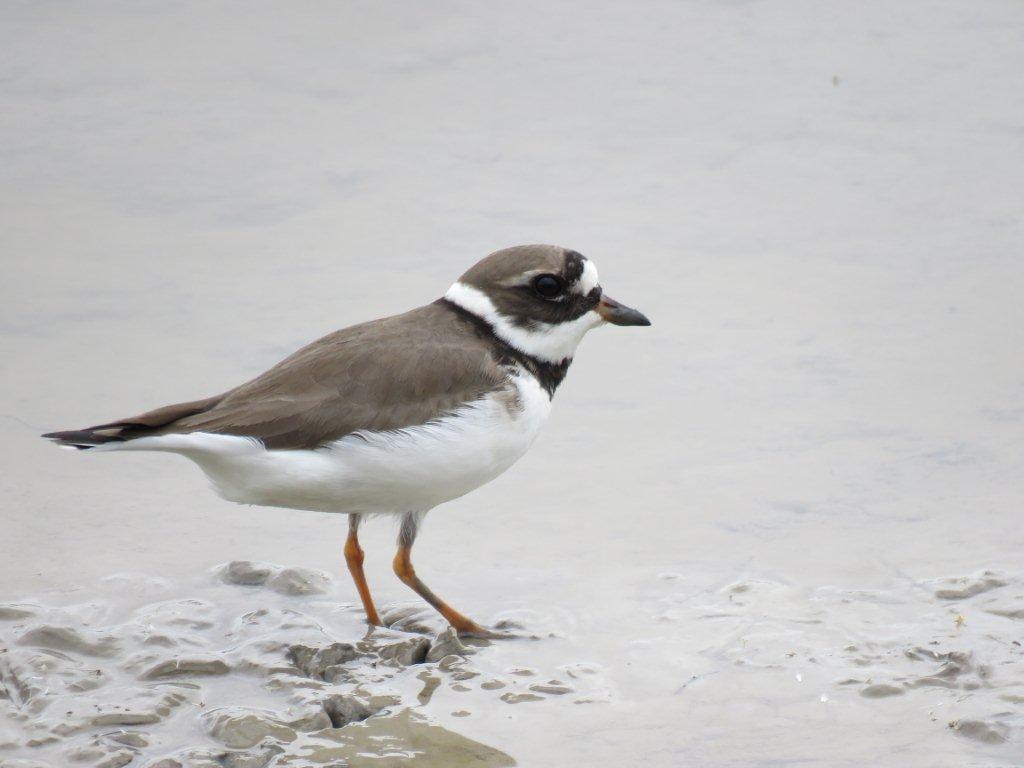 They have a quiet ‘tooip’ whistle with a louder alarm ‘te-lee-a-te-leee’. They are 18-20cm in length with a wingspan of 48-57cm and a weight of 54-74g. Large lakes, open marshes, estuaries and the sea shore form their habitat where invertebrates (mainly Worms) are consumed along with Molluscs, Shrimps and larvae. These birds when stood stock still can sometimes be very difficult to spot, especially when stood amongst the shingle.
They are a small stocky wader with striking facial markings. The upperparts are a grey-brown and the underparts pure white. In winter the legs and bill fade darker (breeding time will see an orange bill and legs). The bill in winter retains the dark tip with a yellowish base to the lower mandible. Black cheeks contrast with a black line over the brow. The black chest-ring is a diagnostic feature as the Ringed Plover has a black eye whereas the Little Ringed Plover has a distinctive yellow eye ring and black chest ring. Sexes are almost identical. For me, the best identification feature for this species is when it flies to reveal striking white wing bars (in both sexes and the juveniles). They often mix in with other wader flocks and are sometimes taken for granted, but a close look will reveral a striking little bird, certainly worthy of being bird of the week on Majorca.