Using yoghurt in the kitchen

Yoghurt is an essential item in the diet of many nations. | Wikipedia

Yoghurt was unknown in the West until the first decades of the 20th century, although in India and the Middle East it had been used for thousands of years. The making of yoghurt is still an important part of kitchen routine in these two parts of the world because it is an essential item in the diet of these nations.

The medicinal and therapeutic properties of yoghurt are now well known in the West and in the past 50 years or so more and more people have been eating it. You just have to look at supermarket shelves to see how popular it has become.

Most Majorcan homes have yoghurt of some kind in the fridge, especially when there are young children in the family. The vast majority of people still think of yoghurt as a dessert or a between-meals nibble, something eaten straight from the tub, with or without a sprinkling of sugar or some other sweetener.

There’s no need to add anything sweet to yoghurt because the manufacturers have already done it — and in a myriad of ways but usually with artificial aromas (not flavours), small pieces of fruit and even plain sugar for those who are too lazy to add their own.

I know one Spanish youth who gets through at least half a dozen yoghurts in a day — if they at least contain sugar. If the fridge were full of unsweetened yoghurts he wouldn’t touch them because adding sugar is too much bother. That’s the unwanted side of convenience foods.

Years ago a few friends made their own yoghurt (one with the aid of an electrical appliance) but nowadays I don’t have a single friend who does her own. Like baking your own bread, there’s a tremendous feel-good factor in doing your own yoghurt but no one seems to do it. 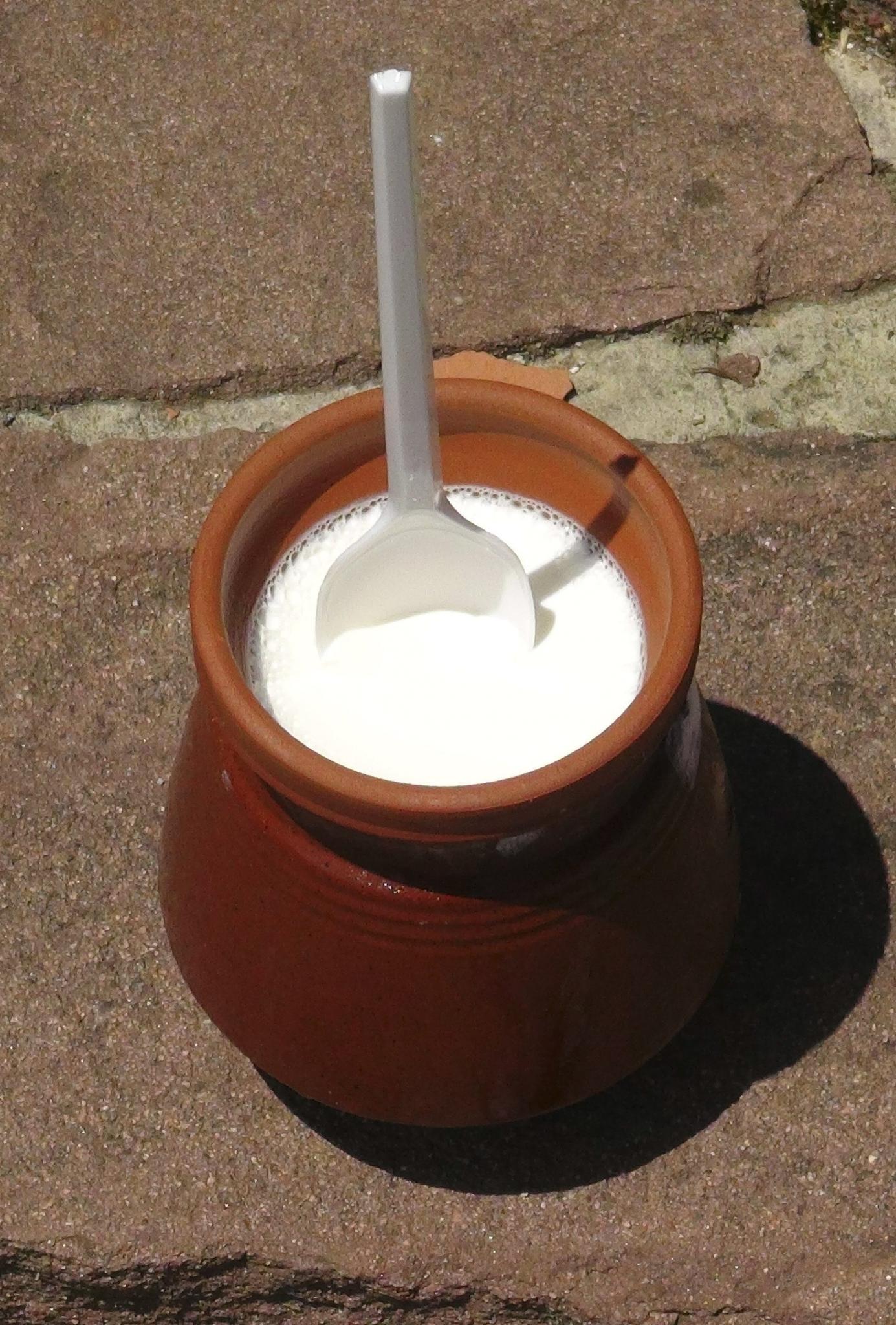 I still have an electrical yoghurt maker stashed away in a high kitchen cupboard but it’s been donkey’s years since I’ve seen it, never mind used it. I buy Mercadona’s Greek style yoghurt and I think it’s excellent: so thick, so smooth, so creamy. And it doesn’t need even a pinch of sugar or the addition of some other sweetener. It’s an incredible buy at €1.09 for a pack of six.

It also makes delicious hot soups and can be used as a marinade for poultry and meat. There are many Indian and Middle Eastern recipes in which yoghurt is the basic liquid element.

Yoghurt straight from the tub can be added to cooked dishes just before serving and it won’t curdle if it doesn’t come to the boil. But it’s a different scene when yoghurt is the main cooking liquid or when it is served with a sauce that has to be simmered: the yoghurt has to be treated to avoid the curdling effect. This process is known as stabilisation.

The curdling effect is easily prevented by the use of stabilisers such as cornflour or egg white. The cornflour method is easier to handle. For one litre of yoghurt you will need one tablespoon of cornflour mixed with a little milk, plus a scant teaspoon of salt.

Put the yoghurt into a saucepan and beat well before adding the cornflour-milk paste and the salt. Bring to a simmer very slowly, stirring constantly in one direction. It can be clockwise or anti-clockwise, whichever you feel more comfortable with.

Reduce the heat to very low and barely simmer, uncovered, until the yoghurt attains a nice thick consistency. This will take 10-15 minutes. Don’t put the lid on the saucepan at any stage. Condensation will cause drops of water to form on the underside of the lid and any that fall into the yoghurt before it is fully stabilised could curdle it.

In Middle Eastern cookbooks you will come across many recipes that call for stabilised yoghurt.

This Turkish dish made with chicken or rabbit is one of them.

Put the pieces of chicken or rabbit into a bowl, cover with the vinegar and water and marinate for a couple of hours. Drain and wipe dry with kitchen paper.

In a deep plate mix the flour, salt, pepper, oregano and the fresh fennel leaves. Coat the pieces of chicken or rabbit with this seasoned flour. Heat the oil in big frying pan, add the chicken or rabbit in a single layer and sauté until nicely browned all over.

Put the meat into a saucepan and add the white wine and the chopped herbs. Cover with a tight lid and simmer for about 30 minutes. Stir in the stabilised yoghurt, mix well, and simmer for another 20-30 minutes or until the chicken or rabbit is very tender.
Transfer to a flat serving dish and dust the surface with the ground cumin and the paprika. Serve with plain white long grain rice or a pilaf made with your usual recipe.

A very old Assyrian lamb and yoghurt stew called immos is rich and creamy and is best when served with plain white rice or a pilaf.

Put the water and the oil into a large saucepan and bring to the boil. Add the onions, lamb, half of the salt, the pepper, garlic and parsley stalks. When the liquid comes back to the boil, cover with lid, reduce the heat and simmer until the lamb is tender and the liquid has been reduced by about two thirds.

Add the stabilised yoghurt and the grated lemon rind to the lamb mixture and simmer, uncovered, for another 15 minutes. Transfer to a large serving dish and sprinkle the surface with the chopped parsley leaves.

Another famous dish using lamb and yoghurt is mansaaf which is popular in Jordan, Palestine and Saudi Arabia. It is traditionally made with lamb or mutton but could also be done with stewing beef.

For a simplified version of this Bedouin festive dish (they usually use a whole lamb) you will need: 1 kilo of boned leg of lamb, mutton or stewing beef cut into two-inch pieces, 1 onion quartered, salt to taste, 900mls water, 450mls stabilised yoghurt, 2 tbsps olive oil, 2 tbsps each of pinenuts and peeled almonds.

Put 300-450mls of stock into a clean saucepan and stir in the stabilised yoghurt. Bring slowly to the boil and add the meat to heat through.

Heat the oil in a small frying pan, add the nuts and sauté gently until golden. Spread plain white rice or pilaf on a large flattish dish, spoon the meat into the centre and cover with half of the yoghurt sauce. Sprinkle with the nuts and serve immediately with the rest of the sauce in a separate container.

Indian cooks use yoghurt more than those of any other nation. It appears in many desserts and cooling drinks, but also in spicy savoury dishes. The Indians also make very good use of yoghurt as a marinade, especially in the northern part of the country where there is an abundance of wheat, with bread being one of the staples.

Among the principal features of northern Indian cooking are dishes in which meat of different kinds are marinated in yoghurt and spices, the marinade then being used to form the basis of the sauce. These dishes are often cooked until the sauce is like a very thick gravy, highly concentrated in taste and clinging to the meat like a glistening jacket.

Such a dish is lamb or chicken tikka for which you will need: 750grs boned leg of lamb or a whole chicken, 1 large lemon, 2 garlic cloves, 450mls stabilised yoghurt, 4 tbsps vinegar, salt and black pepper to taste, a little grated nutmeg, 1 heaped tsp sweet paprika, half tsp chilli powder (or to taste), and 1 tsp each of ginger, coriander seed, cumin, cardamom, cloves and cinnamon, all in powder form.

If using chicken, cut it into 16 pieces. Cut boned lamb into thickish slices, trim off all excess fat and cut into bite size pieces. Halve the lemon and squeeze the juice over the meat, mixing thoroughly to make sure they are well lubricated with the juice. Peel the onion and garlic and chop finely. Put the yoghurt into a bowl big enough to hold the ingredients and beat in the onion and garlic with a fork. Then beat in the vinegar and the spices.
Add the pieces of lamb or chicken and mix well so that each piece of meat picks up some of the marinade. Leave the meat in the marinade for a minimum of 24 hours. The chicken can be kept in the fridge for up to two days and the lamb for as many as five. Give the marinated meat a good stir two or three times a day.

In some parts of India and Pakistan the meat is grilled on skewers. If you are using this method and want to keep the pieces of meat separate from each other, do so with pieces of onion or bay leaf. You can cook the skewered meat in a very hot frying pan or griddle, under a grill or over charcoal. Turn the skewers frequently and baste with some of the marinade.

The cooking time will depend on how hot the grill is and, in the case of the lamb, whether you like it well done or pinkish. Do not let the lamb burn on the outside while remaining raw inside. You can avoid this by turning the skewers frequently.

You can also cook the meat, without the skewers, on the cast iron griddles sold in some hardware stores and in all Chinese supermarkets in the Plaza Pedro Garau area.

While the oven is on full blast, put the griddle on top of a high gas flame until it is very hot. Spread a mere film of oil over the griddle and arrange the pieces of meat so they aren’t touching. Transfer the griddle to the hot oven.

The cooking time will depend on the heat of the oven and also on how you like your meat. The best way to test the meat is to cut a piece through the middle. This dish is traditionally served with chapati or naan bread which can be bought at some supermarkets. But both are easy to make, so you could always do your own.