Spotlight on the North

Andrés and the lady in red

On the home page of Pollensa town hall’s website are four rotating announcements. One is from the equality department and is for self-defence classes, another is for women’s month 2020 in Pollensa, which is centred around International Women’s Day on Sunday week.
Both, it might be said, are rather unfortunate in light of events that took place in Puerto Pollensa last week. It was the Carnival party in the marquee. DJs there were, as DJs there always are. It was a party for entertainment, a spot of satire and the odd costume and mask. Andrés Nevado of the Unió Mollera Pollencina (UMP), the Puerto Pollensa party, was in attendance. He is first deputy mayor and has a specific responsibility for fiestas in Puerto Pollensa. It was therefore perfectly understandable that he would have attended. However, neither Andrés nor anyone else at the town hall could seemingly have anticipated what could possibly go wrong. This was despite Andrés having had his photo taken with a red-headed lady, dressed in an exotic red manner and with a mask. 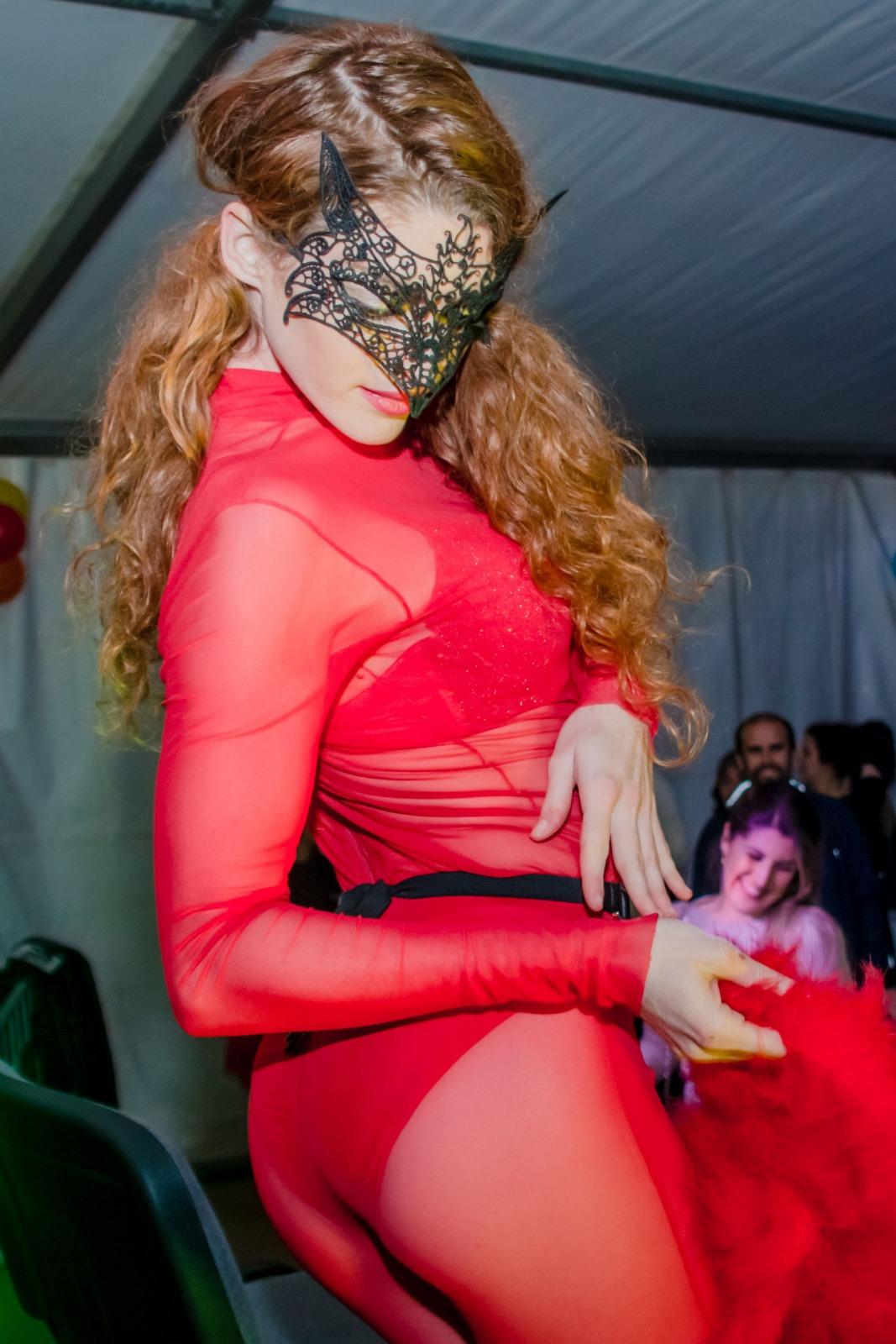 Andrés has said that he wasn’t still in the marquee when the exotically dressed red-headed lady started what was apparently an erotic performance. It is just possible, given her manner of dress, that he might have had an inkling as to what sort of performance was going to be put on, but he and the town hall have made it clear that they didn’t know what the exact contents of the show were going to be. A show, offered by a well-known DJ on the island, Oscar Romero, had been hired by the town hall, but they admit that they didn’t go into the details.

Without being familiar with town hall DJ contracting procedures, it’s impossible for me to say whether they would, as a matter of course, request complete information about what a DJ intends doing. One rather suspects not. By and large, DJs just turn up, spin their decks and go home, and the town hall’s explanations about this affair do rather back this up. A company offering music and entertainment was hired, but there was no further specification.

Oscar Romero is one of Majorca’s most popular DJs. He is a regular at fiesta events, and not just at fiestas. He says that his Romeromania show, which was staged in Puerto Pollensa, is suitable for all audiences, that he has put it on in hotels of all types and in the presence of children. He has said that he is sorry about any misunderstanding, which has arisen because of the dancer - the lady in red.

By way of added embarrassment for the UMP, the Junts-Podemos-Alternativa trio pointed out that the other UMP councillor at the town hall, Bianca Aguilar, is responsible for equality. While she is heading in one direction, they have suggested that Andrés has gone off in the opposite direction. This seems rather harsh. A mistake was made, and the town hall has held its hands up.

Majorca’s traditional bakers are having a hard time of it. One reason is the cost of complying with new sanitary regulations. Another is that the younger generations of family businesses are not interested. Being a baker “demands a lot of work and sacrifice”, says Antoni Bisanyes, whose Puerto Pollensa bakery has been in existence since 1979.
“None of my children want to continue with the family business.” An additional problem, he notes, is that there is that much more competition nowadays. “Even petrol stations sell bread.” He’ll keep going so long as his body lets him, but three other bakeries in Pollensa have closed in recent times, and with their closure and the lack of interest among the younger generations, he fears that traditional bakery products will disappear.

At the Balearics School of Hospitality, a cookery teacher, Amador Granado, says that students have no interest in traditional baking. “They want to be chefs, and if they want to make pastries, they are more interested in fashionable desserts.”

The poor condition of Muro’s museum

The Ethnological Museum in Muro has been in a poor condition for years. It celebrated its fiftieth anniversary in 2015, and at the time I wrote about the problems.
These were mainly because of the damp in the building; they still are. Institutional neglect was another reason; it still is. Comprehensive work was needed, said the town hall’s culture councillor, Miquel Porquer.

Earlier this week, the mayor, Antoni Serra, said exactly the same thing. Five years on, and nothing of any consequence has happened.

The Council of Majorca’s president, Catalina Cladera, and the Council’s councillor for culture, Bel Busquets, were shown around. The poor condition would have been obvious.

Management and care for the museum, Cladera explained, is a shared responsibility - the Council’s and the Spanish government’s. “It’s necessary that the state invests in order to rehabilitate the museum,” she stated.
Five years from now ... 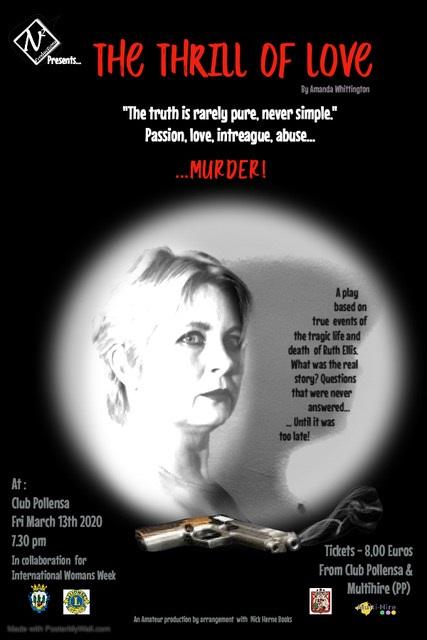 Pollensa play about the last woman to be executed in England

As 9am approached on 13 July 1955, crowds of people began to line the streets outside Holloway prison. Some stared solemnly at the prison walls. Others prayed. Most fell silent. Inside the prison gates, Ruth Ellis received communion and drank a glass of brandy. Then, as the clock ticked round to the appointed hour, she was led to the execution chamber.
Ruth Ellis, the last woman to be executed in England. Her trial lasted one day. The jury took 20 minutes to convict Ruth. Was Ruth Ellis the victim of domestic violence? How much did class prejudice and misogyny play in the decision not to halt her hanging? Is this case any different from the high-profile cases of Christine Keeler, Harvey Weinstein? – These girls sought a life of glamour, mixing with politicians, doctors, royalty. Was Ruth given the gun by another of her lovers?

N2 Productions are delighted to announce their latest project – The Thrill Of Love by Amanda Whittington. With an adult cast of seven, this play will take place on Friday March 13 at 19.30, at the Club Pollença.

We have scheduled the play to coincide with Pollensa town hall’s events for International Women’s Month. We are delighted to be collaborating with The Lions - Mallorca North, and the department of Equality at the town hall. The proceeds from the ticket sales will go to fund educational sessions in both the institute in Pollensa and Puerto Pollensa, on gender equality and sexual education. We will also be donating to The Lions domestic violence fund which provides immediate support locally.

The cast have all been drawn into the story of Ruth Ellis and what the truth was surrounding her life and death. We hope that the audience will leave asking questions.
This may all sound gloomy, but there are delightful moments when the girls in the London clubs meet and become friends; the play features the music of Billie Holiday.

Tickets are 8€ and are on sale at the Club Pollença and from Multihire in Puerto Pollensa from Thursday February 27. The play contains some adult content.