I remember seeing my first Glossy Ibis on Majorca as if it was yesterday. It was late December in 2010 at the Albufera in the Sa Bonc area. I had actually been on the raised viewing platform near to the large derelict farmhouse which has now all but collapsed. I was there before dusk waiting for the Starling murmuration. As usual, Marsh Harriers were quartering the reed beds and flushing up Mallards, Gadwall, Teal and Coot, and suddenly, as one low flying harrier passed across in front of me, there was a ‘whooshing’ sound and alarm calls as six Glossy Ibis previously hidden in the tall reeds took flight. They circled for a while and after the harrier passed they got the confidence to drop back down into the reeds and out of sight again. Wow – wintering Glossy Ibis? Indeed they were. I saw them later that winter in the same area too.

It had been a great build up to seeing the Ibis, as earlier on I had been watching a pair of Stone Curlew moving around in the short grass of a small field adjacent to the platform, where Rabbits were scurrying around the feeding Curlews, and a small covey of Red-legged Partridges had come onto the scene. To add to these delights, a Hoopoe turned up and proceeded to peck around in the soft earth. A male Stonechat called nervously from the fence line and in the distance a light-morph Booted Eagle passed over the reed bed. It all added to a great early evening, but the Ibis put the icing on the birdwatching cake.

In recent years there have been more sightings of this species during migration time from the salt pans in the south (Sallinas de Llevante), albeit usually consisting of single birds. They tend to stay for a day or so and then move on. The Albufera remains the best site to see them however. In flight they appear quite a large bird, and when they come in to land they can sometimes spook the smaller waders which mistake its bulk for a predator. They have a wingspan of 80 – 95cm and a length of 55 – 65cm and a weight of 550 – 650g. The plumage is mostly a rich chestnut-maroon which shows up almost iridescent in good light. In poor light they can appear almost black. The green and purplish sheen to the wings and back are a real eye catching feature of this species, and not to mention the pinkish bill which is long and down curved. Breeding birds, have white lines showing from the base of the bill extending around the eye. Aquatic insect larvae and animals form the bulk of their food. They have a long neck and a large bulbous head which are actually good identification features if seen flying from a distance.

One to look out for!

I remember seeing my first one and mistaking it for an Iris. I was halfway there however as this species belongs to the Iris family, but I thought as the group were so small they had perhaps been nibbled by the local Rabbits. I didn’t realise until studying the plant books later that I had actually seen and photographed the Barbary Nut. 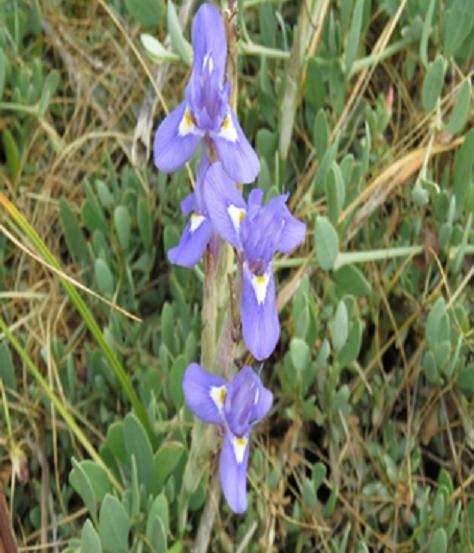 This is one of my favourite little plants on Majorca outside of the orchids. They scatter mats of iris-like flowers which are a rich purple-blue, finely veined and marked with a distinctive yellow oval shaped patch to the throat. Now, this 15 – 35cm tall Iris-like herb has a corm, and the leaves are just over half a centimetre wide. The flowers range from a very pale lilac to blue-lilac or even violet at times, and can comprise several flowers to each little stem. They are easily overlooked not because of their colour but due to their size, and I wonder how many times over the years I have indeed walked past these dainty little plants. But once seen you tend to spot more little groups. They flower from February to June, but in sheltered locations also from November to December.

So what makes them different from an Iris? Basically, they differ from an Iris by having a root stock which is a corm (which resembles a bulb) - Irises have a bulb or a tuberous rhizome. Plants are easily missed until the early afternoon by which time the flowers have opened completely, and upon reflection, I think it was in fact early afternoon on that particular day when I first spotted them. The flowers only last one day but are replaced daily over a long period. The exact spot where I saw them, and have seen them over the following years since, tend to be near to the old stone building with the large Olive tree growing in front of it, and down to the nearby raised viewing platform. Anywhere along this little stretch I have seen them, and the wall itself nearby also holds a very nice Prickly Pear with some Dwarf Palms close by – both of which often attract feeding Chiffchaffs at this time of year as they pass through on their way back out to Africa. It is an amazing plant and one I never tire of seeing.

Majorca is seeing a steady increase in migrants moving through now, with Black Kites in particular being noted, along with numbers of House Martins and Swallows. Soon, the Common Swifts will be arriving along with other migrants such as the warblers. So there are exciting times ahead for the nature lover on Majorca, from birds to orchids to butterflies and flowers. It is also an exciting time for me too as my new bird watching book has been printed and is available for sale. It is the most comprehensive guide to the island covering all 340 known recorded species of birds and covering over 30 different sites. More on this next week.