The Anglican church in Majorca is busy working behind the scenes to keep its presence warm and effective in the Lockdown. Not easy when both the Anglican Vicars recently left their posts on the island for ecclesiastical pastures new in the Diocese of Europe. The congregations in Palma, Pollensa and Cala D’or are working hard every day to make sure that church life continues online, on the phone and in pastoral care.

Today, my ‘Humans of Majorca’ are two of the great people working to support and encourage the faithful and the seekers in Majorca. Ron and Viv retired to Majorca and immediately joined the Anglican Church in Palma. They offered their huge experience of ministry in Australia as they were both trained in the Church. Two reverends for the price of one is what the church has been fortunate enough to receive. Except of course they are not paid, they are members of the congregation with unique skills.

The Revds Ron and Viv Larkin came to live in Palma Majorca five years ago. Their first visit to the island was in December 2013 following a Pilgrimage to the Holy Land to spend Christmas with their daughter Emily. They were at that time in senior leadership positions in the Uniting Church In Australia (an amalgamation of the Presbyterian, Methodist and Congregational denominations), in Western Australia. Viv was Synod Associate General Secretary Pastoral for five years before retirement and Ron, Moderator of Western Australia for three years. They both went into these positions after training together at Murdoch University and Perth Theological Hall and 13 years serving in team ministry in congregations in Western Australia. 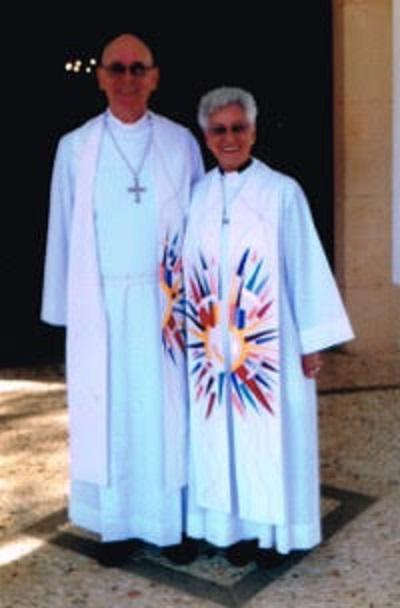 They made a decision to retire to Majorca to keep contact with their daughter Emily who was often based here. Emily had no interest in returning to Australia so their decision was made. Majorca it was, where the place delighted them and gave them much of the Australian sunshine they were used to.

Since their arrival they have worshipped and been part of the Ministry Team in the Anglican Church on the island. During this time, in the churches interregnum both Ron and Viv have been resourcing the Anglican Church both in leading worship and pastorally. At this time of Lockdown when churches are not allowed to open their doors, they believe it is important for the church to be active and available to all on the island. They have been working with the website and meeting via Zoom with the Pastoral Care group. They are also available to talk to people on the phone and by email.

There is a huge amount of work going on to support the congregation at this time. All of it without being able to actually visit or see anyone. This is a challenge especially when some older people in the congregation are not comfortable with the technology. Ron and Viv are constantly working on this aspect of the care the church can give.

Their own love story started in the Royal Airforce and the Womens Royal Airforce at RAF Halton in Buckinghamshire UK. Ron was an apprentice Aircraft Technician and Viv was training as a Dental Hygienist. They married shortly after leaving training in 1972.

After leaving the RAF in 1978 Ron moved to Saudi Arabia to work with British Aerospace in Dhahran. Viv and Emily had to wait 18 months before they could join him there. Then the Saudi Arabian life was a family adventure until it was time to move on. The family emigrated to Western Australia on conclusion of BAC’s contract where they remained for over 32 years.

The road which brought Ron and Viv to Majorca is appreciated by the Church. To have such an experienced team within the community at this time is a great blessing. The Australian Church world involves driving miles to conduct services and using technology to keep in touch with people in outlying districts. Home visits by the church here is a mute point at present but the technology is not a problem. It is almost as if their life path has directed them to Palma for this moment in our history. To be useful and put all their years of experience and training to work in Lockdown Majorca is a blessing for the people.

The Anglican Church community on the island can be contacted by phone, on Facebook and via the information on the website.