The Balearic Symphony Orchestra during a rehearsal. | MIQUEL A CANELLAS

It has of course been many a long week since there were any events. They are now restarting. In Puerto Pollensa yesterday there was a circus in the church square. There were three performances by Circ Bover, who will be appearing in Alcudia on June 26; these performances are part of their Circ a la fresca tour. Also yesterday, in Campanet it was the first of the Balearic Symphony Orchestra's #SomemPerTu small-format concerts. The orchestra's concert in Pollensa's Sant Domingo Cloister this evening is sold out, or so to speak, as it is free, but there may be some space in Sa Pobla tomorrow at 20.00. The concert there costs three euros (for charity) and is in Plaça Alexandre Ballester. Tickets have to be acquired online from http://secure-web.cisco.com/1M9JfR27kX66-dz8yKWUelXoyHs2jMgWs5IcvAt1ciujxFQcMXUSVf7ysKo1QabXuezDuhDystzh3D32EK0IK0KR1Qhw_wBQaHkZBW7xSav47OSt21Eh7Kefuo4OW9yvhDGYLhNgJCRYDkqS5nd07tLMD3QPA6DFFYxV9Qci8cM5xprqY8GjOXg3TcAeXKpTIBI-Vk6PNxCnbXGlxcBlTQPCZ_d3QGKU3J2epN-efeU2u9-WzNMK-ZGC9_QbM6Gcc/http%3A%2F%2Fwww.ticketib and will be sent in digital format. No cash will therefore be changing hands at the entrance.

On the fifth of June, the first of the Maridatges de Vi i Òpera of the season will be at Sant Domingo. Promoted by Euroclassics, these bring wine and opera together. In Pollensa, Can Axartell wines will feature, and the opera will be courtesy of Jorge Tello (baritone) and Joan Laínez (tenor) with Maria Victòria Cortès on piano.

Muro, the Costas and social distancing

With beaches needing to be sorted out in order to ensure social distancing, Muro town hall is no great rush to mark areas out. Mayor Antoni Serra has rather wisely observed that the "regulations are changing day by day". "The first thing we're going to do is wait."

The town hall may use wooden posts similar to those used for the dunes, but there is a snag with these. They may get in the way when it comes to cleaning the beach. In any event, as the mayor also notes, the town hall would need permits from the Costas Authority if it were to instal these posts.

This is a very good point. I wonder how many other town halls have realised they may need permissions from the Costas for adding items to beaches that aren't included in specifications for beach services.

There is a "fairly long stretch" of beach, Serra notes with some understatement. As there won't be as many foreign tourists this summer, maintaining social distancing may not prove to be as problematic as it will be on smaller beaches. 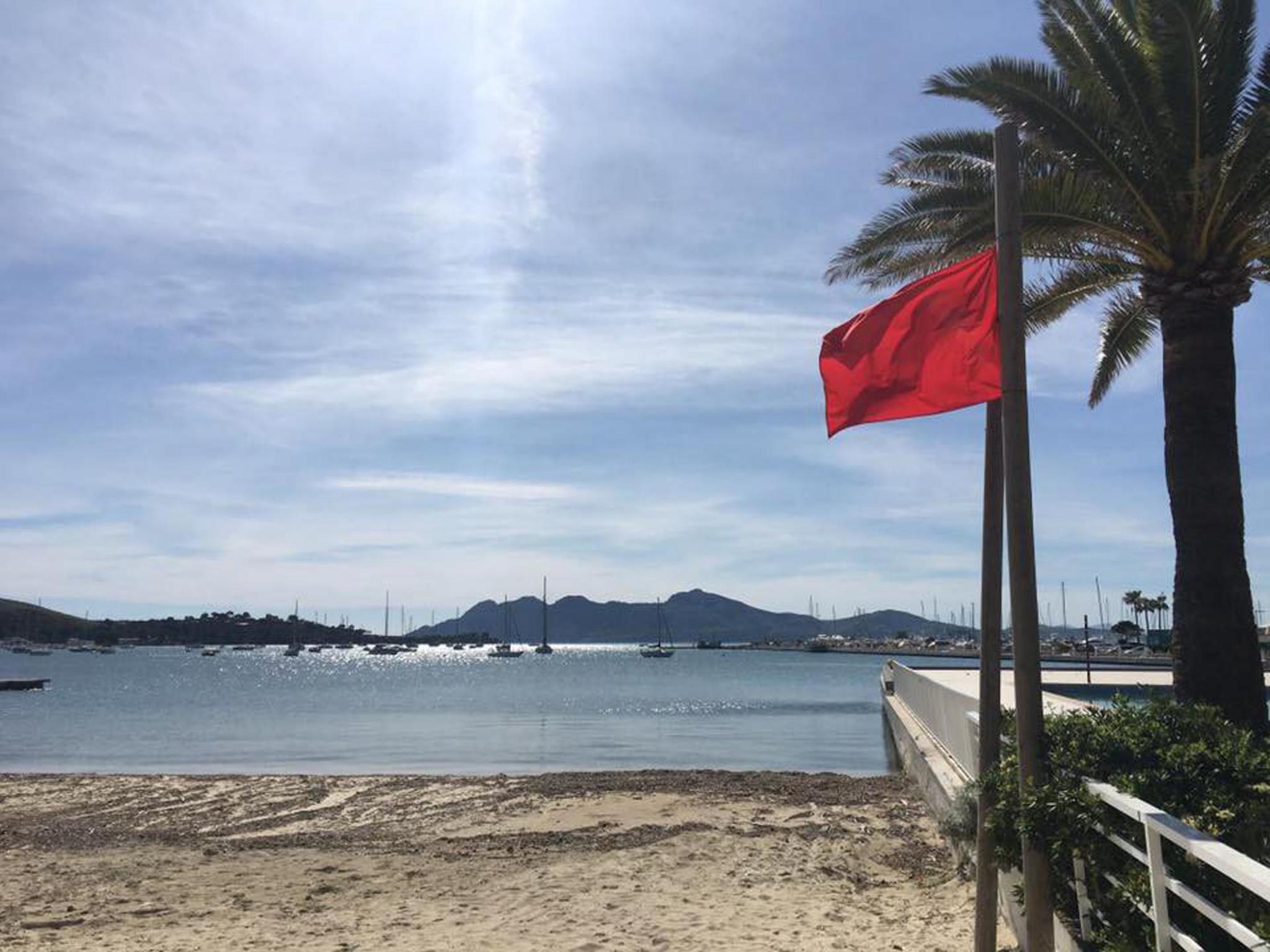 It is a year since the municipal elections, and Junts Avançam, who were sent into opposition as a result of those elections, have taken the opportunity of the anniversary to list their criticisms of the Tots-led ruling administration. A paralysis of investment; 40% increases in executive councillors' salaries; reduction in the number of council meetings; less transparency; less participation; lack of protection for the frontline in Puerto Pollensa; failure to comply with electoral commitments; inability to agree on Covid-19 measures; deficient management of beach services.

Other than all this, the administration must be doing a grand job. But still on beach services, or the lack thereof and which has caused such a rumpus, Junts complain that, among other things, the administration has failed to set up a Covid beach monitoring committee. This is despite there being ten councillors in all from Tots, the UMP, the PP and El Pi. Junts compare this situation with that in Alcudia, where there is a committee and the beaches are "100% ready". 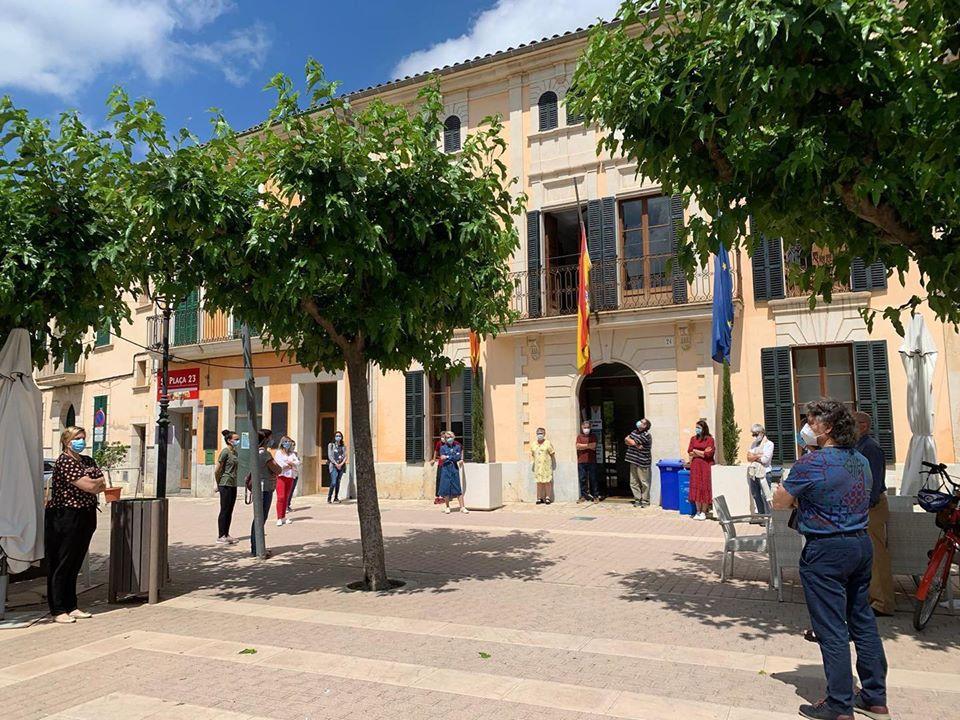 The minute's silences on Wednesday were very fine gestures and were observed across the island. There were, however, some comments regarding social distancing, comments which we are no doubt going to have to get used to for all sorts of situations.

It did seem to depend on how many people were involved in the minute's silence, the layout of the location and the angle of the photos that were taken. Pack a whole load of people in, and there won't be much space between them, if any. But there were always the masks for situations where it wasn't possible to maintain social distancing. Indeed there were, as there also were when it was possible.

Sa Pobla town hall arranged a number of folk in a line in front of the town hall, and there wasn't much space between them, something that didn't go unnoticed, and this also applied to the mayor's mask. In one shot the mask had slipped so that the top was touching the base of his nose but not covering it, thus exposing his nostrils. Still, to be fair, he was a fair distance away from everyone else; the only one who was.

Campanet had the best idea and the best photo angle, using a good area in front of the town hall building and ensuring that capacity was restricted. 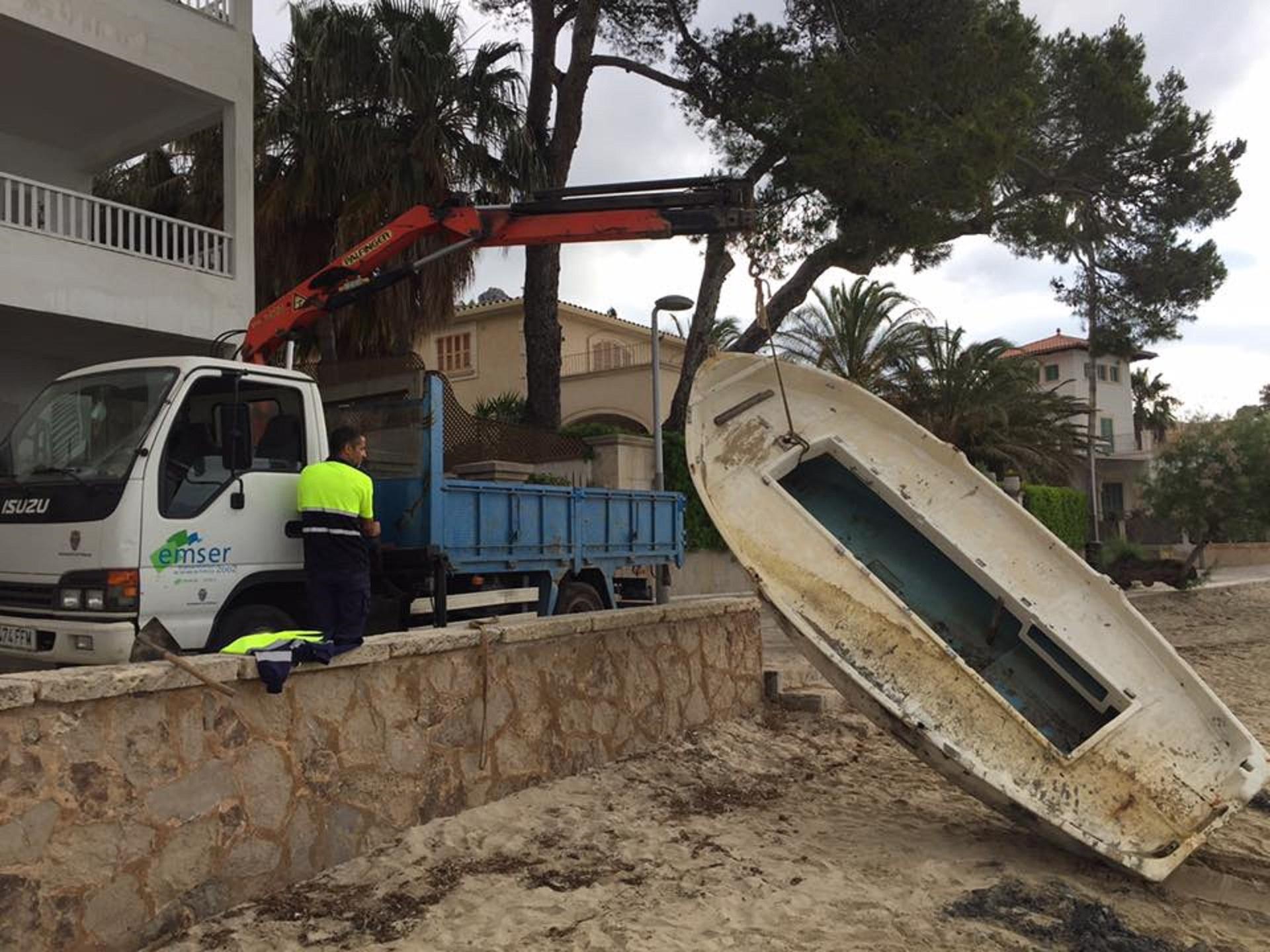 A spill in Puerto Pollensa

Monday was the day when we could all return to the beaches, so bang on cue there was some sort of spill in the sea in front of the Daina in Puerto Pollensa. This happened on the Sunday and would appear to have been related to work going on which is meant to stop spills of a faecal or potentially faecal nature.

Meanwhile, there was also more work on retrieving boats or parts of boats from the water. It would seem that most if not all had sunk because of Storm Gloria. And another victim of the storm, a pine tree on the pine walk, was also taken away. Back on mask watch, it was noted that Emser personnel weren't fully masked and gloved up while removing the boats. As I say, we're going to have to get used to these observations.