Today’s restaurant is one of the busiest in Palma, playing to full houses for lunch and dinner six days a week. Every time I eat here I keep seeing the same faces: few Palma restaurants have such a faithful clientele.

I was especially interested in returning to Sa Ronda after the new post-virus capacity rules. The hurly-burly din of their normal (pre-virus) day, which came from the regulars’ eternal joie de vivre and tremendous gusto for drinking, eating and talking, had to be experienced to be believed.

What would it be like in the new normality? Well, there were fewer tables and not even a single row of people at the bar (it’s frequently three deep) — but there was little difference in the decibels emanating from the regulars’ jaunty joviality. It’s still din and dine at Sa Ronda…and no one’s complaining because everyone continues to eat extremely well here.

I went to Sa Ronda intending to have their mixed paella but when I saw they had fillet steak at €18 (a good price) I changed my mind: I wanted to compare it with the fillet mignon I had at Casa Gallega last month, part of a €15.50 menú del día.

After giving my order, the waitress returned with a disappointed look to say their last piece of fillet steak was less than a full portion. But I wasn’t disheartened: I immediately said we’d have that fillet if we were charged an appropriate price. In the end it was €12 with chips and little green peppers. That made it a real bargain.

It was ‘cebón’ meat — from a cow that is older than the usual ‘ternera’ and fed on a special diet to produce rich meat full of flavour. In the picture you can appreciate its lovely violet-like colour. It tasted as delish as it looks.

We had ‘raolas de merluza’ as a starter. The ‘raola’ word means a croquette, but what we were served was fritters done with hake. They were very nicely fried, but there was too much spongy batter and not enough fish.

We had two Basque ‘canutillos de crema’ which are similar to the Sicilian ‘canòli’ we hear about in movies featuring the Mafia. The superb ‘canutillos’ had a smooth custard-like filling that made a lovely contrast of textures with the brittle deep-fried casing.

We were fortunate to have the amazing Cristina at our table, one of the most efficient and delightful waitresses I have ever known. She didn’t stop rushing from tables to kitchen and although I frequently interrupted her work to ask what other clients were eating, she always smiled and patiently explained the dishes. She got a well-deserved 10 rating.

Sa Ronda is still Sa Ronda — one of the best places in town to enjoy authentic Spanish regional cooking and where every dish is great value for money. Even the cañas are only €1.70 — I know of no other central restaurant (or bar) with such a low price. The raolas were a bit too spongy but they were nicely deep-fried and were still enjoyable. The more than half portion of fillet steak was a magnificent piece of meat, very well underdone as requested. If I had a restaurant I’d always have half portion fillet steaks on the menu: I think there would be a great demand for them at that price. And to top it all there was Cristina — one of the finest waitresses I’ve had the pleasure of knowing. She’s the kind of person whose interest in her work is above and beyond the call of duty — it’s amazing how that helps to make one’s meal truly memorable.

Casa Vasca Sa Ronda, Avda Argentina 37, Palma. Tel:871-7164989. Open for lunch and dinner from Monday to Friday. This restaurant is always very busy and bookings are recommended on any day of the week and for lunch or dinner. The lunch service starts of 1.15pm, making it a good central Palma place to have an early meal. It also functions as a bar and if you’re shopping at the Santa Catalina market you can drop in for a ‘canutillo de crema’ and a café con leche — or a caña and a tapa, depending on the time. 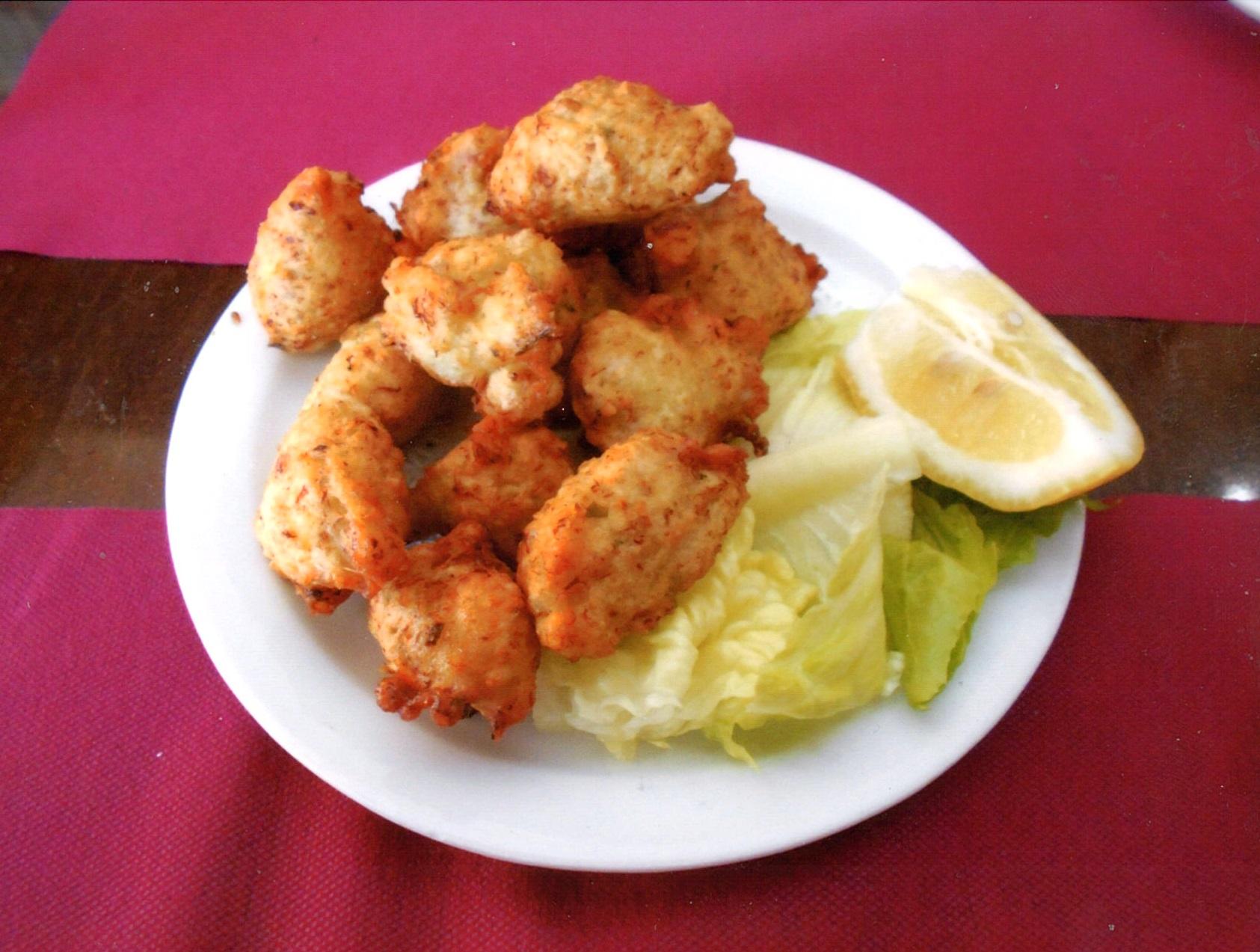 There have been many restaurants in Palma that call themselves ‘bistros’ — even although few of them have any of the characteristic traits that make Parisian bistros stand out from ordinary eating places.

On the other hand, no one has ever thought of calling their restaurant a ‘bouchon’ — even although at least half dozen Palma places would qualify for use of that French word.

A bouchon is, among other things, a cork and, by extension, a tavern, and it is almost exclusively associated with Lyons. For many French gourmets, Lyons is the capital of French cuisine (a title it wrested from Paris more than a few years ago) and a city whose ‘bouchons’ epitomise everything that is first rate in French cooking.

A ‘bouchon’ has a simple decor, with walls covered with paintings and drawing by local artists, old copper cooking utensils hanging at strategic points, and frequently bright checked covers on the tables.

But more than anything else, it’s the food that makes a ‘bouchon’ — and it represents the best of French provincial recipes that come without any frills. No ‘bouchon’ cook will serve something with foams and twirls that typify a creative cook’s attempt to up-date old recipes. In a ‘bouchon’ tradition counts for much more than the new-fangled nonsense of so many of today’s cooks — many of them with Michelin stars.

The cooking at Sa Ronda is very much like this — except, of course, we’re talking about Spanish regional (much of it Basque) and not French provincial. Many of the regulars are like the three men at the table nearest to ours. They ordered an impressive series of dishes which they shared, including a small octopus a la plancha that looked splendiferous. They also had a butterflied grouper (one of the sea bass family) and, among other things, chopped pigs’ ears on skewers that wasn’t even on the menu.

In the coming months I’ll be visiting other Palma places which, I think, have similar traditions to those of the ‘bouchon’, especially about how food should be cooked and served.