Palma to Inca and how tourism “drove” the roads of Mallorca

One hundred and twenty years ago, on the tenth of January 1901, the state plan for roads announced that there was to be an improvement to a “carretera” in Mallorca - Palma to Inca. This was a distance of some 33 kilometres, which - as coincidence had it - was almost exactly one tenth of the length of the entire road system in the Balearics. The state plan itemised how much road there was per province of Spain, and in 1901 there were precisely 333 kilometres in the Balearics, and these 333 kilometres were only short of equating to one per cent of the length of the carretera system in the whole of Spain - 35,606 kilometres. For the record, there were - as of the end of 2018 - 165,624 kilometres of “carretera” in the country.

The old Palma-Inca road was to undergo further improvements until there reached a time when it was deemed to be inadequate for the volume of traffic. So they decided that a motorway was needed. Work started in February 1978. The Guardia Civil fired rubber bullets at protesting members of the Farmers Union. Road modernisation had truly arrived, but a democratic right to protest had yet to genuinely transition from the years of the dictator.

But back in 1901, the authorities would have become aware that something was going on that might hasten the need to improve the roads. There were carriages, there were carts, there were horses, and there were now also automobiles: a few anyway, a very few.
The first car to find its way to Majorca was a carriage car - a De Dion Bouton model Petit that was brought to the island from France in 1897 by one Vicente Juan Ribas. The excitement was great, the press declared. “Soon we will see this new class of vehicle circulating on our streets.” Unfortunately, they didn’t. The car was transported, rather than driven, to Vicente’s place in La Vileta, and that was where it was to remain. He managed to travel along some lanes of his estate for a few minutes before the De Dion Bouton packed up. Not even paying for some mechanics to come from France could get the thing to go again.

In 1900, there was a total of three automobiles registered in Spain. One of them belonged to a retired naval officer, Josep Sureda, who lived in Santa Catalina, Palma. It’s reckoned that Josep’s Clément-Panhard was not only the first of the three to be registered in the country but was the first registered car anywhere in the world. PM-1 was the number plate, and PM for Palma de Mallorca was to be used for another 96 years until it was briefly replaced by IB for Islas Baleares before the one hundred-year-old city/provincial system was scrapped in favour of the national system that there is now.

While the automobile was a new element to take into consideration, the impetus to improve roads at the start of the twentieth century was to come from two sources - tourism and a plan that was presented in 1901 - the Plan Calvet for the development of Palma. Named after Bernardo Calvet i Girona, who was a roads, canals and ports engineer and - between 1906 and 1907 - the mayor of Palma, the plan was eventually approved in 1903.

With Alfonso XIII having issued the royal order of 1902 to permit the demolition of the city walls, the Plan Calvet envisaged the expansion of the city. It was described as “radio-concentric”, which basically meant radiating from the centre. The plan was for avenues and streets leading away from the old centre of the city, and the reference points for this expansion were the communication routes - the roads that went to Andratx, Llucmajor, Manacor, Soller and Inca, the latter of which was to later be known as the C-713. 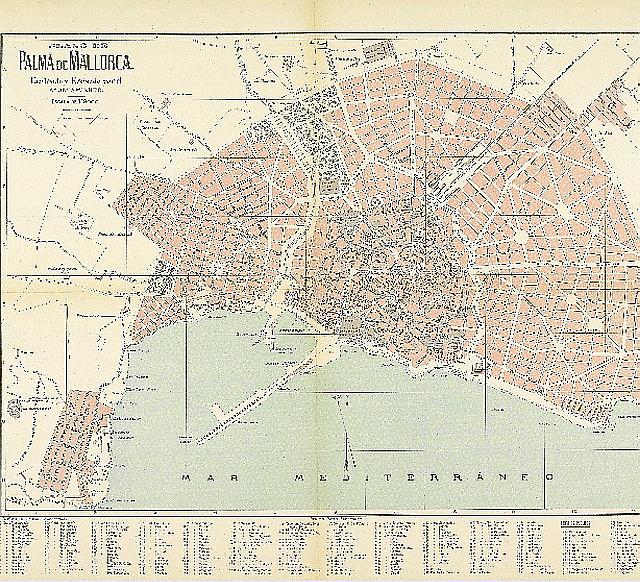 The condition of the roads, regardless of the 1901 improvement of Palma to Inca, was very poor. With tourism beginning to occupy the thoughts of the island’s businessmen and others, it was recognised that there had to be efforts to upgrade and indeed create an infrastructure beyond the rudimentary. The founding of the Fomento del Turismo (Majorca Tourist Board) in 1905 was to prove crucial, but even then, the development was slow and limited.

To give an example of this, in 1911 it was decided that a road to link the pueblos of Andratx and Estellencs was needed - a distance of some eighteen kilometres. It was to be a public-private enterprise inasmuch as the town halls of Andratx and Estellencs each put up 500 pesetas and the town halls of Banyalbufar and Esporles 350 between them, while the tourist board provided 1,000 and three individuals another 2,000. The funding for the road was the rough equivalent of 25 euros.

It wasn’t really until the 1920s that the road system genuinely did start to improve. This was the decade of, for example, Antoni Parietti’s Formentor road, while the imperative for better roads came not just from automobiles but also from excursion coaches. Tourism was driving the roads, as it was to drive so much more during the twentieth century.