Our Thursday evening weekly car show at the Blue Nest in Port Adriano is going strong. Different cars turn up every week, it’s never boring. An ever changing kaleidoscope reflecting the itinerant nature of Mallorca. Even in a pandemic. Last week the focus of attention was undoubtedly the Bentley seen here. 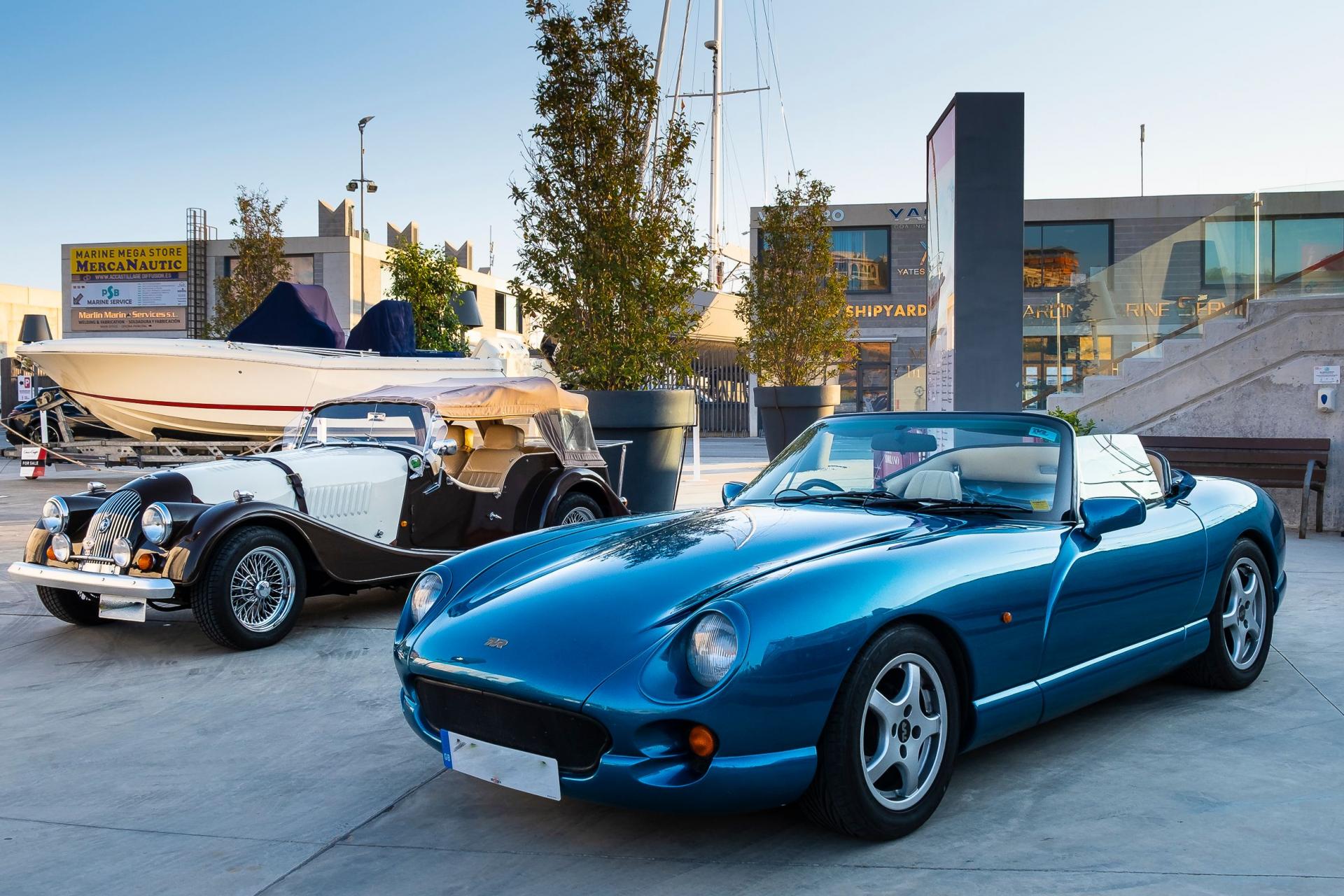 The Bentley S series was made from 1955 to 1961. In 1959, as the S2, it was given the now ubiquitous Rolls/Bentley V8 which was a development of the even more ubiquitous Chevy small block, which is still made today. There’s just something about the lines, the timeless majesty of these cars, which others, apart from sister manufacturer Rolls-Royce, simply don’t have. 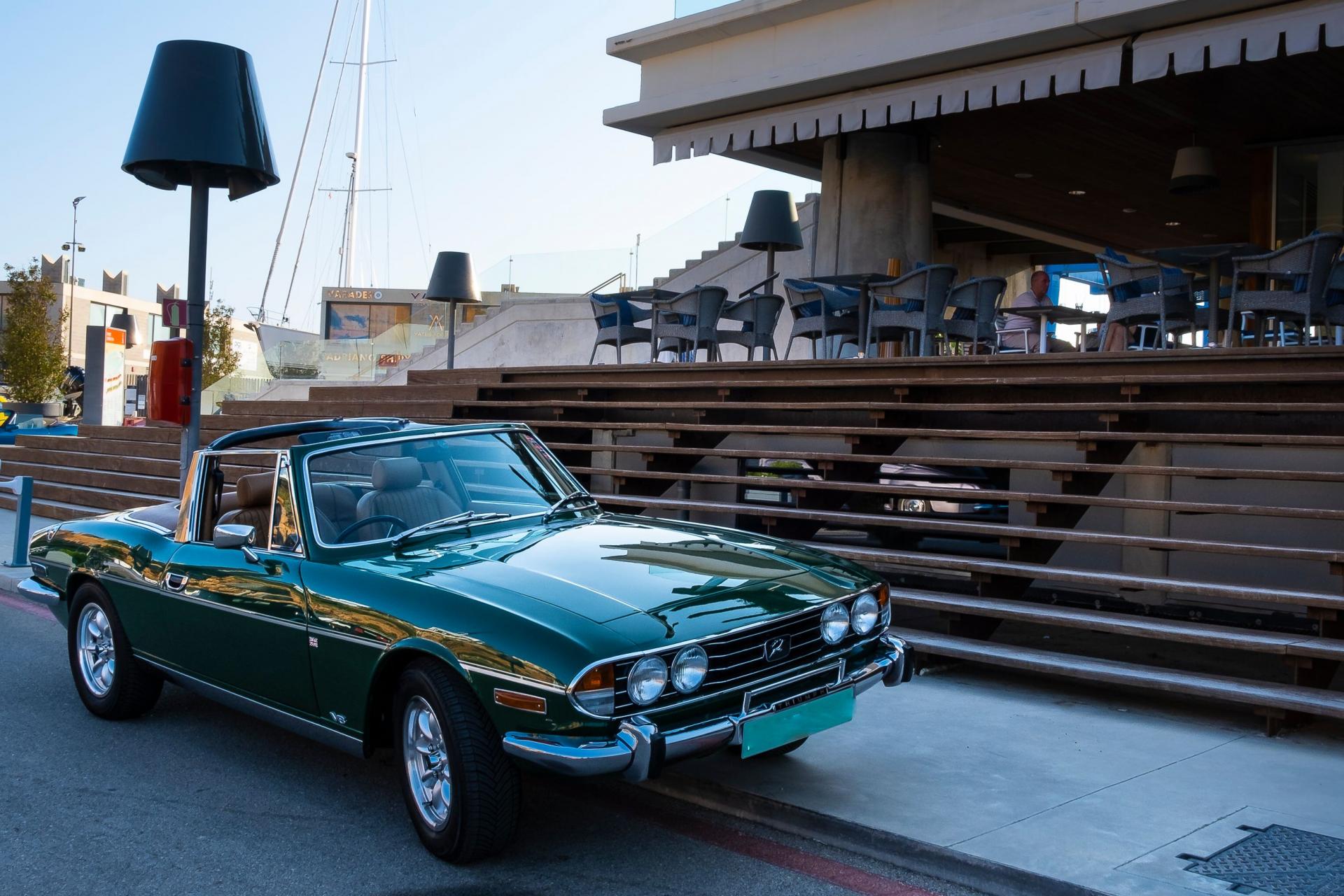 Of course there are more obvious attention stealers such as Ferraris. In this particular instance, the driver probably wished the earth had swallowed him and his Ferrari immediately. Or even quicker if possible.

With at least 30+ people watching, he was slowly reversing to manoeuvre into a better spot. But didn’t spot my wife’s Mercedes 380SL… and ouch! the sound of breaking, no not glass, but indicator lens. Luckily no bodywork damage. And that bit of plastic was made by Bosch to a Mercedes specification so the damage was minor. A new lens will sort it out. This must be the ultimate embarrassing oopsy you can experience at a car show. 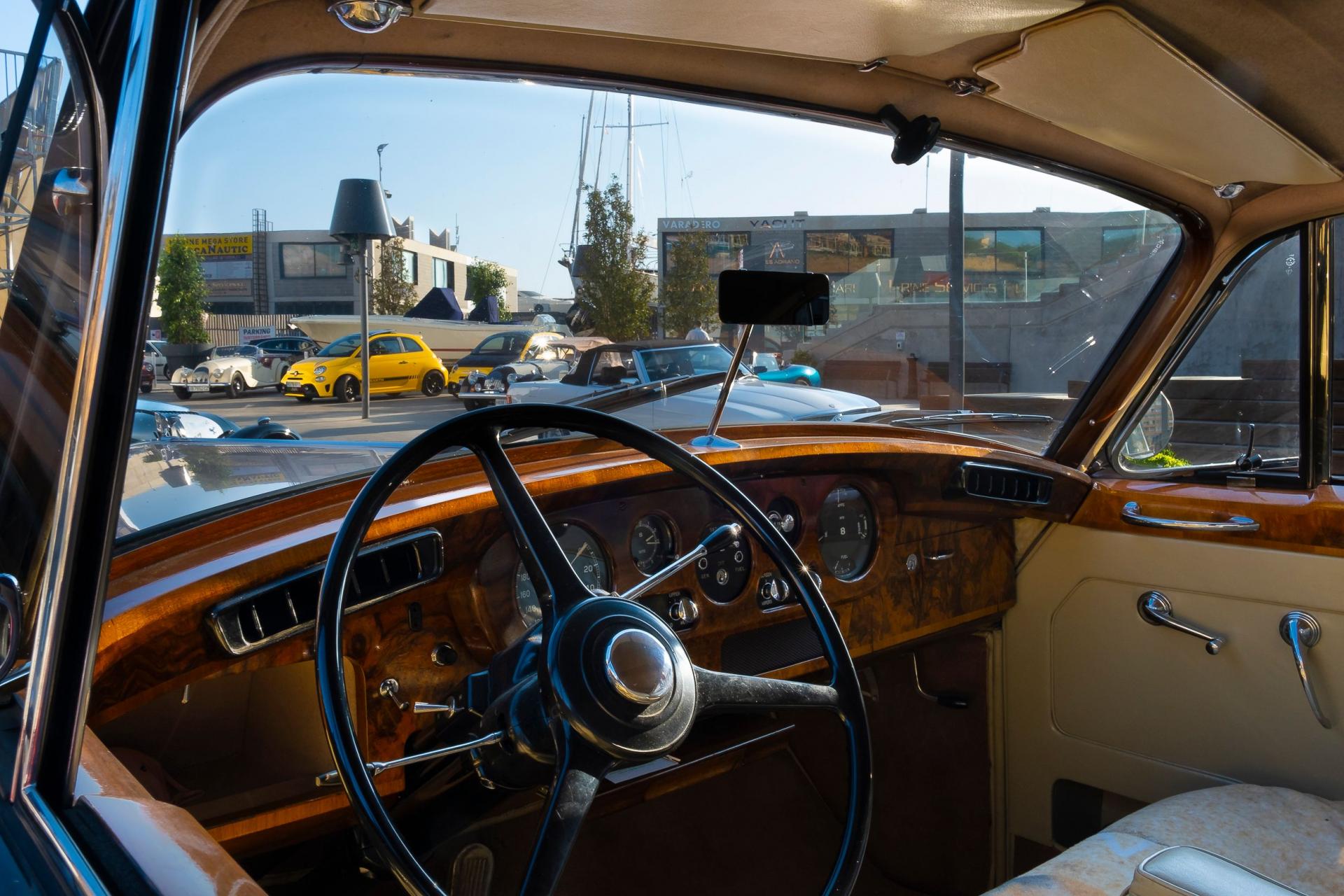 Ironically this was the Merc’s first visit to the meeting this year. Jane said ‘take the Merc tonight and give it a good run’. So much for that idea. I guess if you’re going to have a very minor crunch, at least backing your Ferrari into a classic Mercedes is the way to go.

Changing the subject completely, I was minding my own business on the Vespa bread run into Port d’Andratx the other Saturday morning, when I came across a dockside show put on by the Club Petanca Port Andratx and Classic Riders Andratx. I suppose balls and wheels go together. The show was predominantly on two wheels with some fascinating classic bikes and scooters. 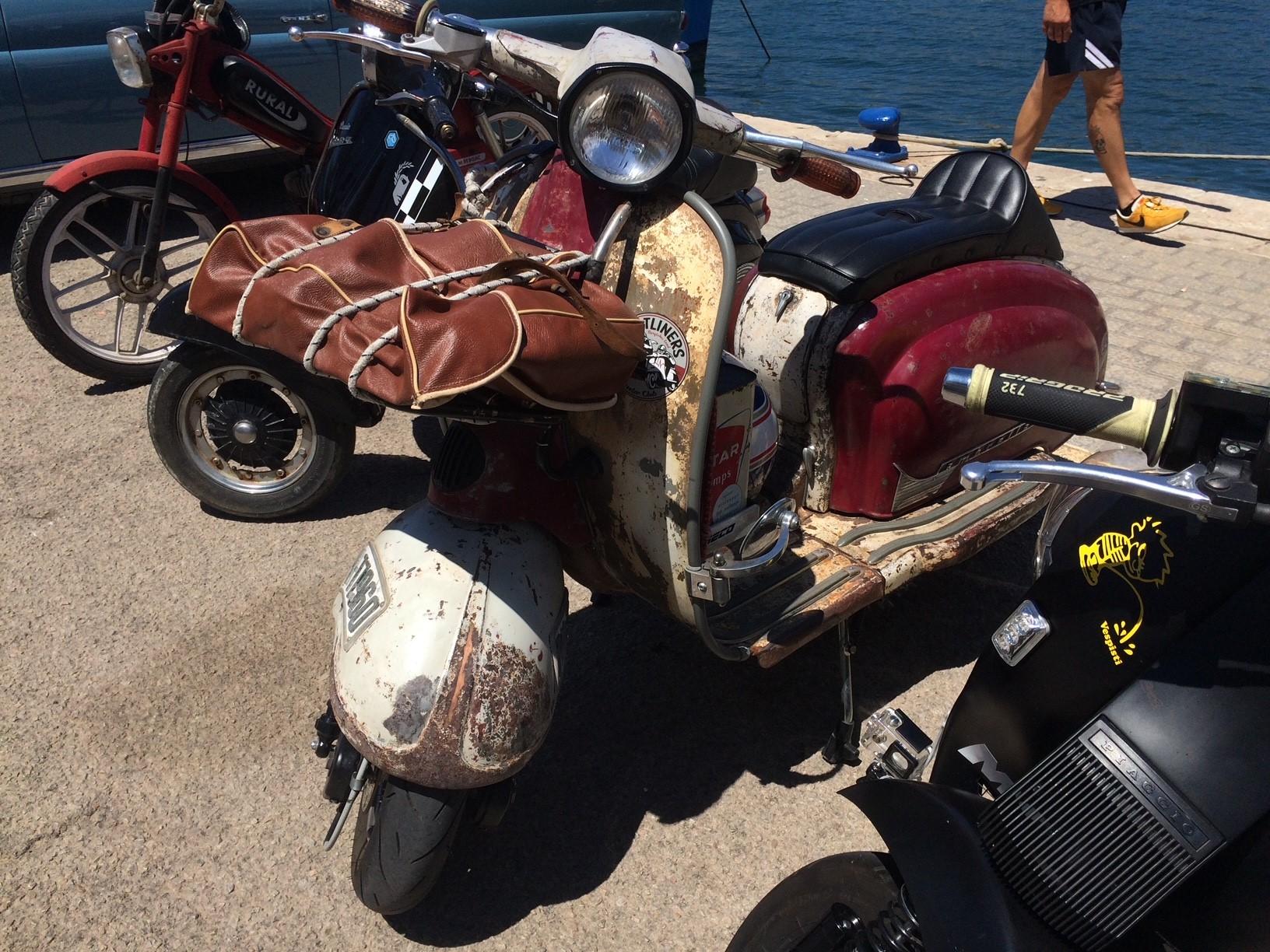 I’m a bit of a Lambretta junkie, so here’s a pic of an Li 150, probably from the ‘50s, in restomod/ distressed/ rat garb. That’s when it looks old but the mechanicals are either fully rebuilt or modern. This one sported a particularly nice billet front suspension and disk brake combo. 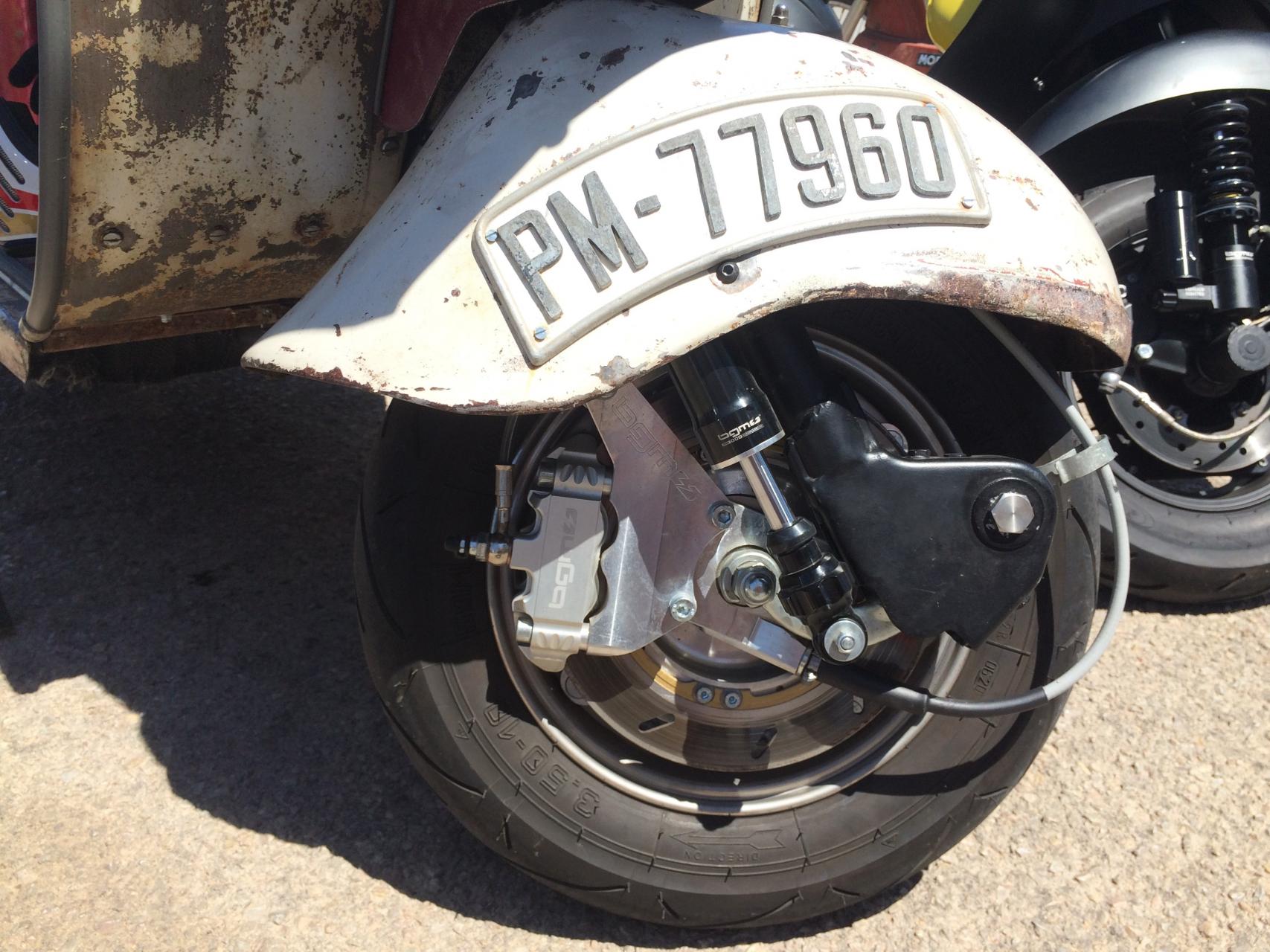 You can buy disk brake conversions for many old Lambrettas. I looked them up out of interest and one particular translation I found is a warning to those of you who put faith in ‘google translate’. The anti-dive geometry of the conversion is described as ‘preventing the annoying penetration during braking’. Not surprisingly, the images which came to mind were not what the copywriter intended. 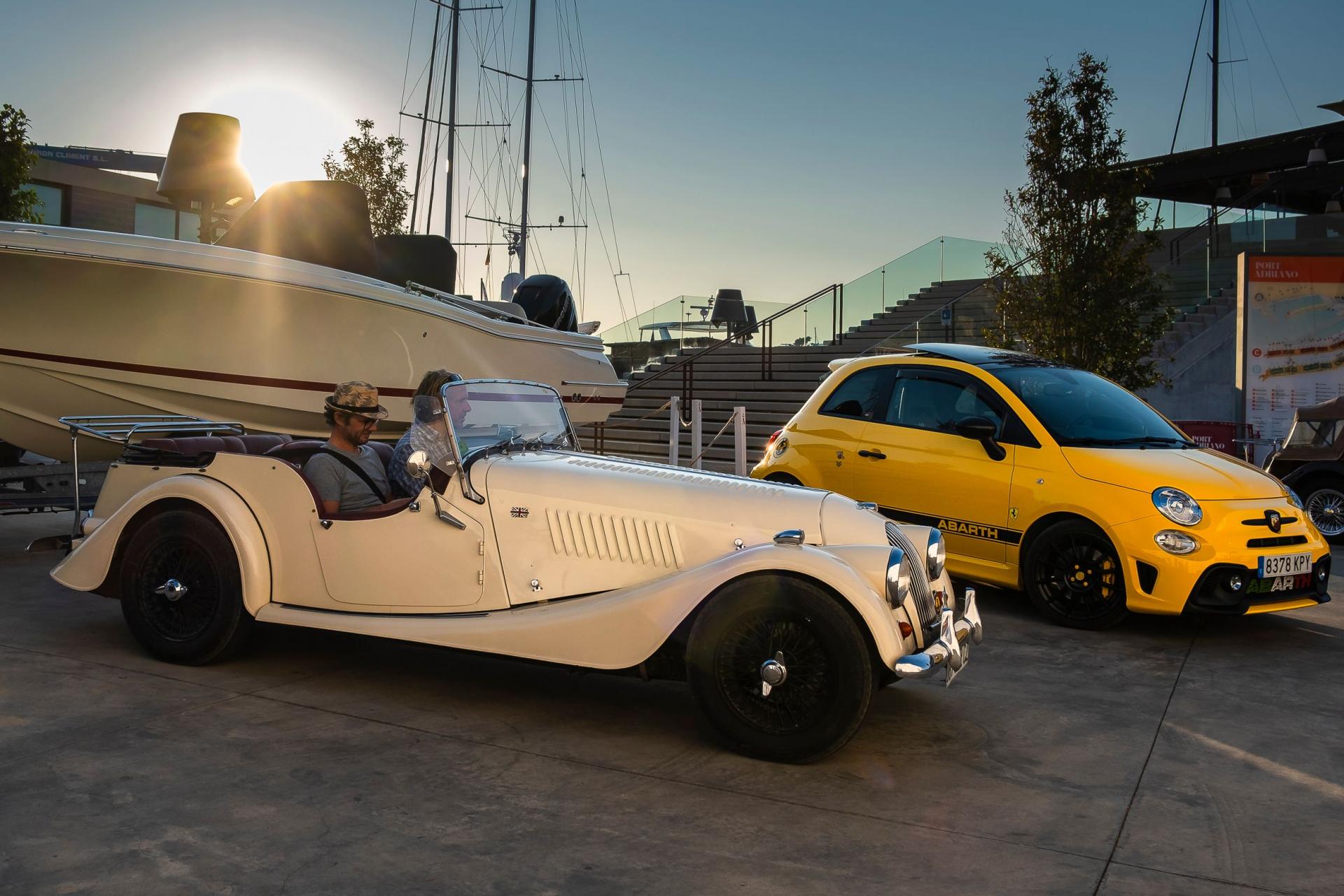 Here is another useless fact for you motorheads. Apparently Innocenti, who made Lambrettas, were the first company to equip a two wheeled vehicle with a front disk brake as standard equipment. Although it was still cable operated, the stopping power was much greater than a drum brake setup. I could have done with that on my first Lambretta, stopping quickly was always an interesting experience. 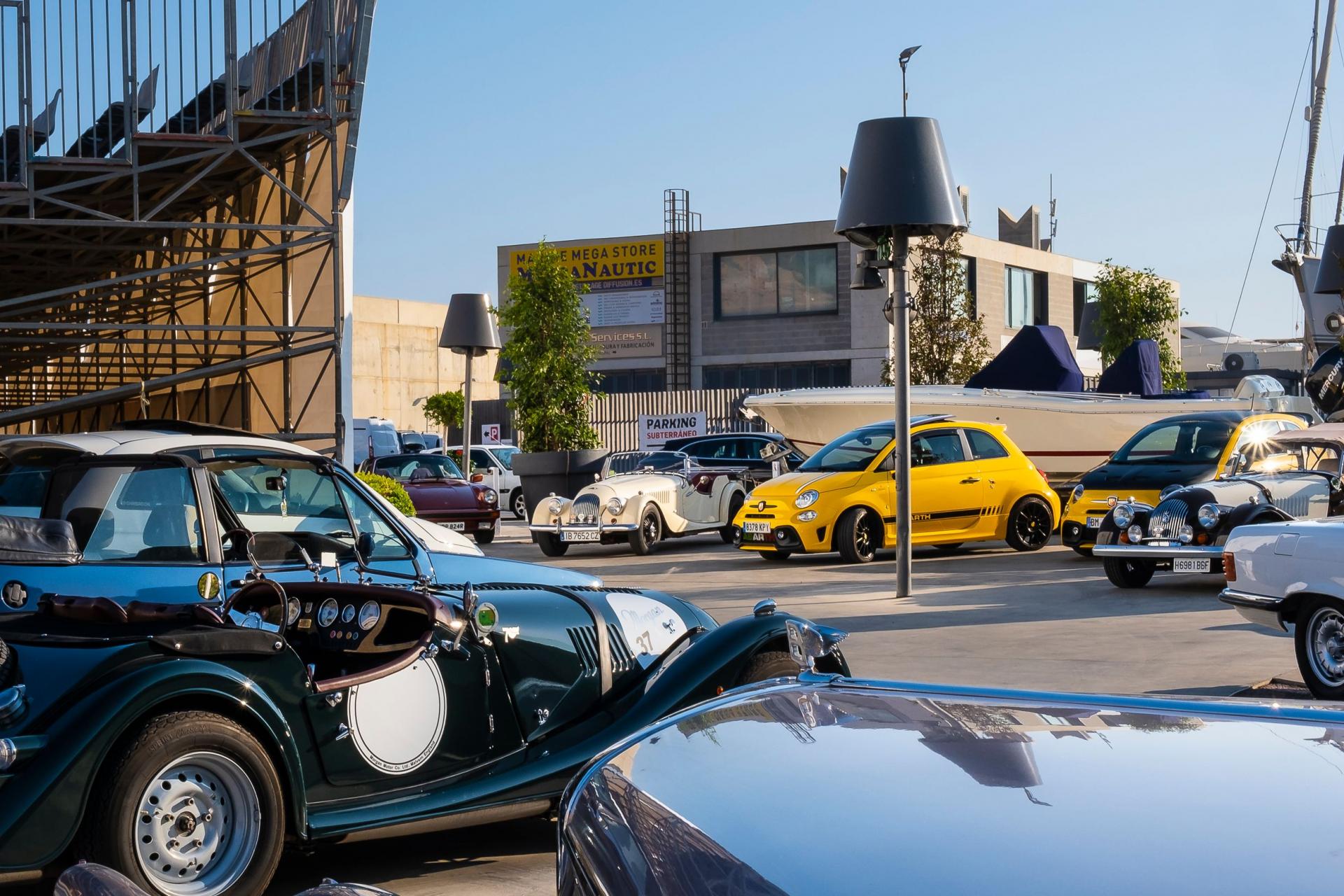 This dockside show also featured a rather nice Fiat but that deserves a section to itself so I’ll save it for another time.

Over and out for now. Drive safely, be it forwards or backwards.

The weekly meetup is at The Blue Nest in Port Adriano every Thursday from 18.00. Inspiration by The Classic Car Club at www.cccmallorca.com.