The fascinating world of crustaceans: lobsters, crabs, and prawns

The Mediterranean slipper lobster is endangered and is protected by law. | @daviddiaz

There are more than a thousand species inhabiting our coast. Crabs - crustaceans that seem to play hide and seek among the rocks or sand - don’t go unnoticed. There are also spiny lobsters with long antennae that act as sensors.

Hermit crabs live on empty shells and hide within them. Shrimps and prawns appear to dance delicately in the water. These and many other species are part of what we call ‘decapod crustaceans’; one of the fifteen projects we have in the marine citizen science platform “Observadores del Mar” in which everyone can participate.

Given their gastronomic interest, one would expect that the life cycle of crustaceans and all their characteristics to be very well known. However, there are species such as the spiny lobster - the most emblematic species of the group - that still holds many surprises. Although the adult lobster was already known in Aristotle’s time, the juvenile lobster took much longer to be discovered and it was only towards the end of last century when they were found. 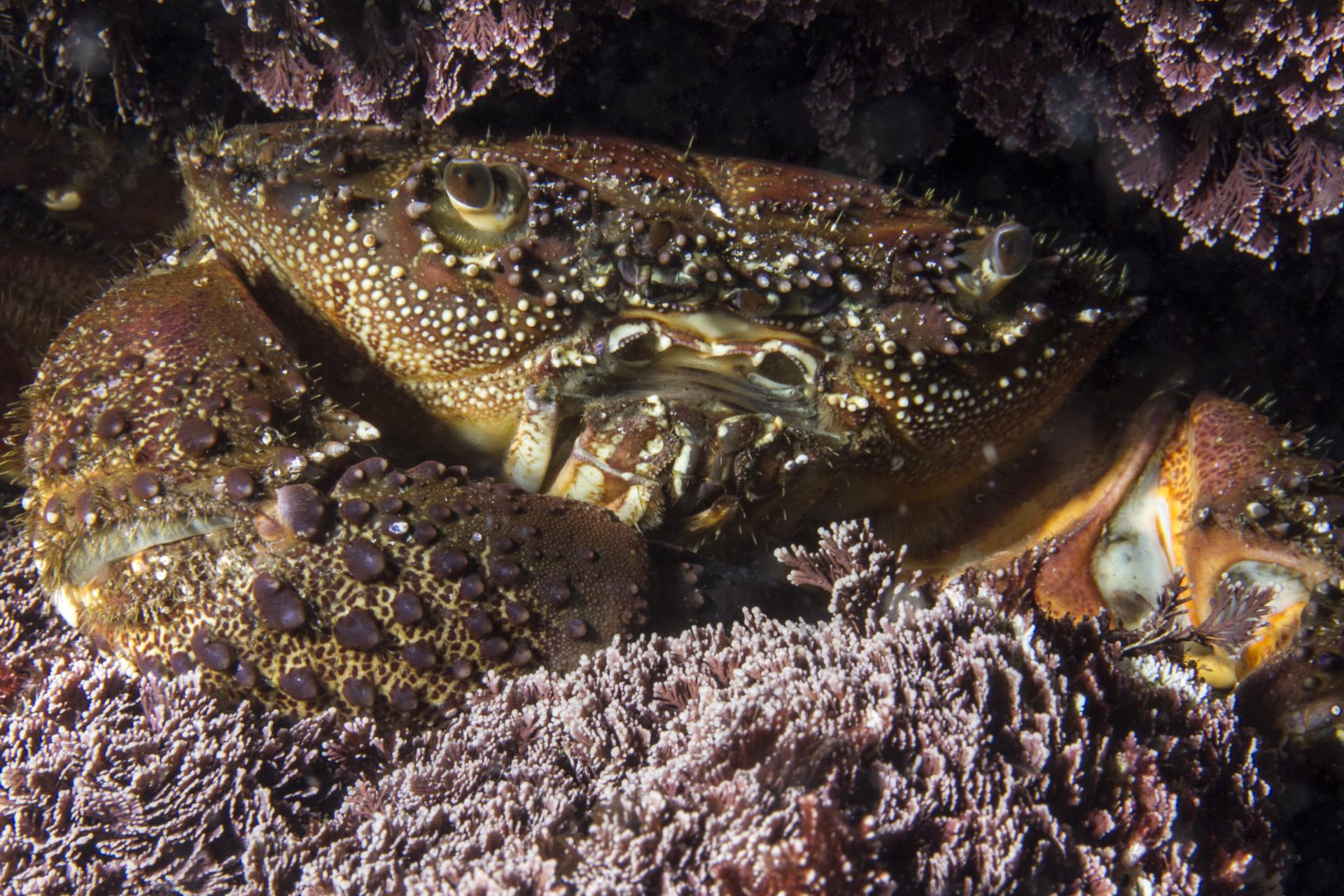 Juvenile lobsters are smaller replicas of the adult individuals and are often found at depths of 15-20 metres, not so deep as adult individuals. However, they are not easy to see as they hide between the rocky walls or seafloor. One might find them between May and September (although scientists believe that the lifecycle is shifting towards June because of the rising temperature of the water). Catching a glimpse of the antennae is the best and probably only way to locate them. A good tip is to look at ‘clean’ rocks, without algae, because it is throughout their antennae - which act like sensors – that lobsters perceive their surroundings and too many algae prevent them from doing so.

Apart from the lobster, there are other species with gastronomic interest. One of them is the blue crab - a species from the Atlantic and which has rapidly expanded throughout the Mediterranean coast. The blue crab is considered an invasive species. It is an omnivorous predator that eats absolutely everything, scavenging and even feeding on its own kind. Such is its voracity that in the Ebro Delta (Southern Catalonia) it has wiped out several species of crustaceans and molluscs from the area.

The nimble spray crab is another invasive species. It is a flat brown crustacean that arrived in the Balearic Sea around the end of the 20th century - the first sightings were in the northern part of Mallorca, in the Albufera, and in Menorca. It is an herbivorous species, feeding mainly on algae, that can be found on flat rocks and hides very quickly. Its ecological impact is still unknown for the moment, the only thing we know is that the amount of algae decreases where this species is found. 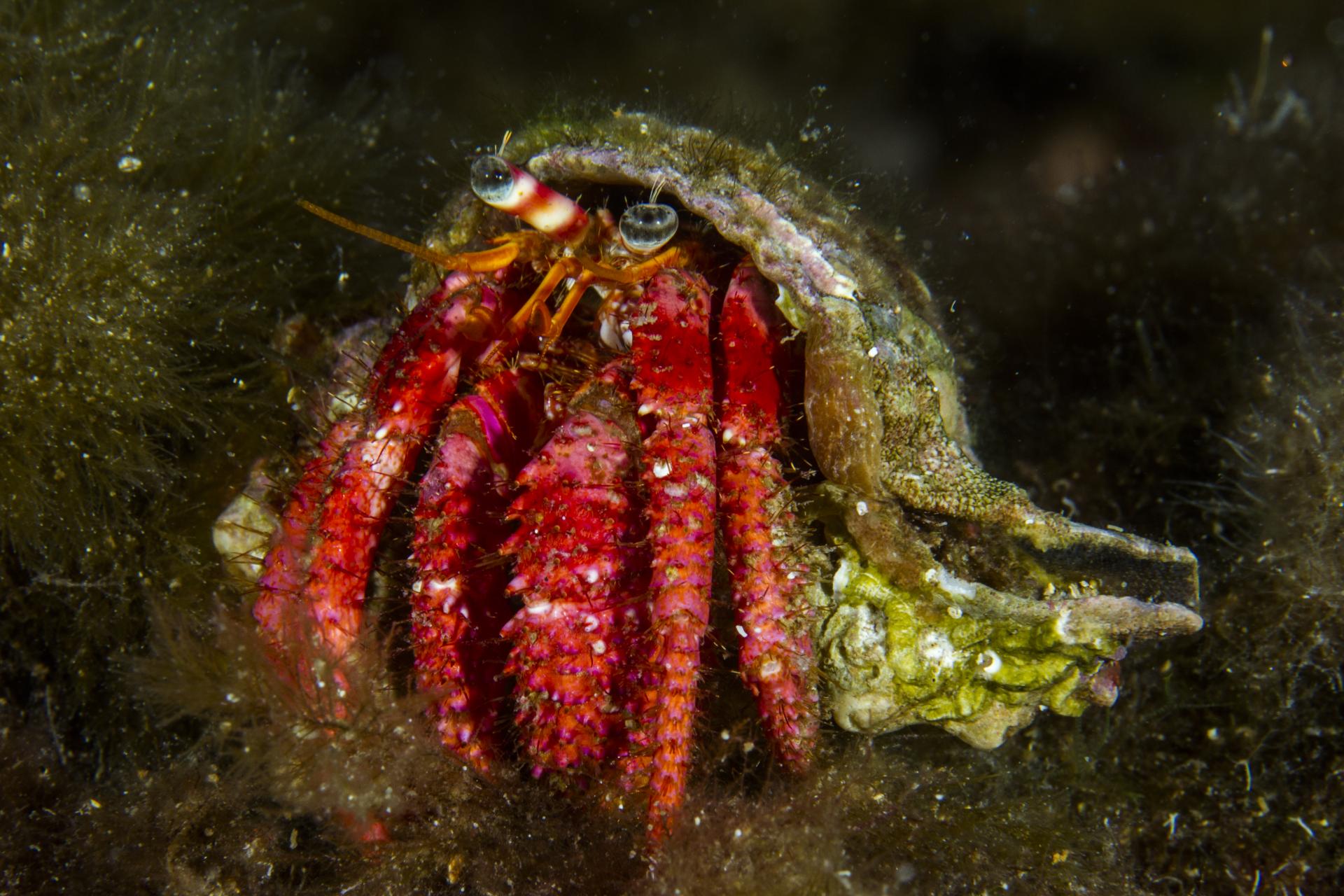 Globally there are plenty of other fascinating examples of crustaceans. For example, in Japan we find the Japanese spider crab, the largest species in the world. It measures several metres in size including its legs. Other crab species, on the other hand, can be minuscule and are not visible to the naked eye. Some of these small crabs can be found searching among the algae and habitat-forming macroalgae such as Cystoseira a brown alga with creates small forests in shallow waters providing habitat to multiple species of crustaceans, molluscs, and juvenile fish.

Keeping a diverse and healthy populations of crustaceans is important for the ecological stability of marine ecosystems. Marine protected areas play a key role in the protection of species which were once abundant, but which have become increasingly rare, such as the European spider crab and the slipper lobster.

Both are protected by law in the Balearic Islands. So, if you are lucky to see one of them we encourage you to upload your sighting on the marine citizens science platform: www.observadoresdelmar.es