Roast beef - Once a popular choice for Christmas Day

All foreigners I have ever come across (and there have been many) have an incredible number of misconceptions about Britain and, especially, about English food.

Just about everyone says that one eats badly in England. A Mallorcan friend says he has been to London several times and has never had a good meal there.

I pooh-poohed him and said if you go to London and don’t eat well it’s because you don’t want to eat well. I have always rated the best of British food as being in the list of the world’s top six.

The vast majority of foreigners make another major mistake: they think roast beef is England’s national dish. It is not and never has been. Roast beef, especially in Tudor England in the 15th and 16th centuries, was always expensive and only the aristocracy could afford it.

A baron of beef, a joint consisting of two sirloins joined at the backbone, was once served at the stateliest of stately homes — and only on special occasions.

Before Prince Albert married Queen Victoria and introduced German traditions such as the Christmas tree, and before Dickens helped to popularise many of these newfangled trends (including roast turkey), the elite enjoyed roast beef as a main course on Christmas Day.

But the sight of the huge roast turkey on the Christmas table became the insignia of all that is splendiferous of Christmas fare and even pushed the baron of beef out of the way.
There are still some people, however, who have roast beef at some point during one of the 12 days of Christmas. I did it for the family some 30 years ago on Christmas Day with a standing rib roast which I ordered from a Scottish butcher who had a shop in Can Pastilla.

He produced a beautiful piece of beef weighing almost six pounds that was nicely chined and ready for the oven. I did nothing to that joint except anoint it with a generous amount of lard, dust it with freshly ground black pepper and roast it in the oven at full blast for a rather short time.

It was one of the finest, least stressful and easiest family Christmas meals I have ever done. I am thinking of doing another roast beef this year but in will be an even simpler affair: a piece of Angus entrecôte that will roast in half an hour or so and will carve beautifully with my long razor-sharp Japanese sashimi knife.

Some people are most adept at roasting meats of any kind and others make a hopeless mess of it. But that doesn’t mean the art of roasting is a gift we are born with. It is not in our genes, although the French food writer Jean-Anthelme Brillat-Savarin (1755-1826) seemed to think so.

Brillat-Savarin, a magistrate who wrote The Philosopher in the Kitchen, a collection of reminiscences and reflections on cookery and the art of eating, made many silly gastronomic statements in his time and an aphorism on roasting was one of them.

He wrote that a man can learn to be a cook, but he has to be born a rôtisseur. In some places, such as many parts of Spain, the art of roasting meat in a wood-fired oven is passed on from father to son and mother to daughter. But it’s not done through genes: it’s by word of mouth and observation. 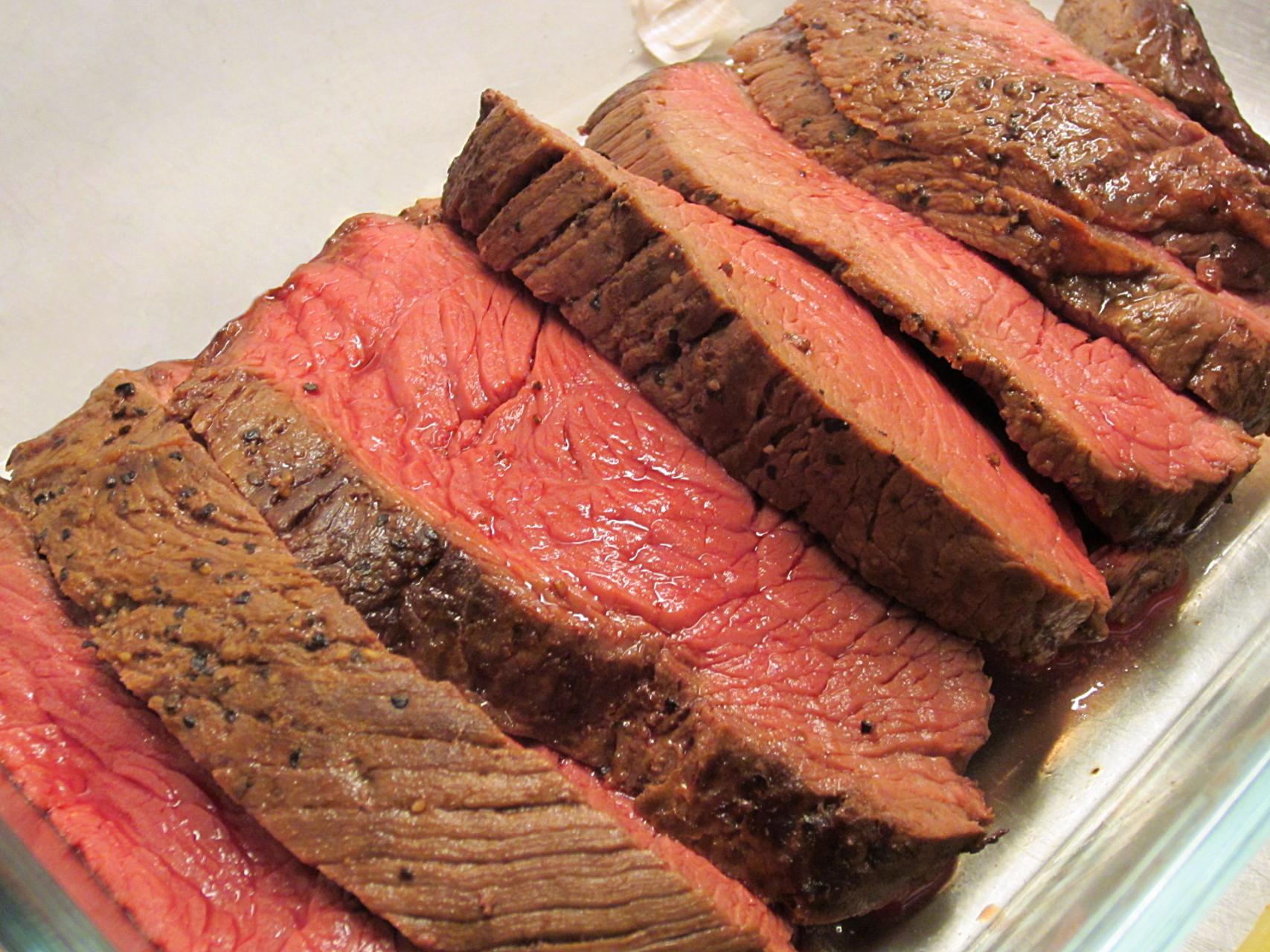 All of us can become experts at roasting meats if we have the basic know-how — and lots of experience. The latter is of the utmost importance. Most of us don’t roast meats very frequently — and that inevitably means we are not good at it.

When roasting a piece of meat it is essential to know what is going on in the oven and what the heat is doing to the meat. A piece of animal flesh consists of bundles of muscle fibres held together by collagen, Mother Nature’s glue.

When meat is heated to 70C and above, regardless of the method used, three changes start to take place. First, the muscle fibres contract, making the meat shrink. This causes the interior juices to rise to the surface.

When meat is being roasted in a hot oven, the beads of juice squeezed to the top and the upper sides come into contact with the high heat and are immediately dried off. This causes a crust of concentrated juices that is extremely tasty.

The juices that are forced to the bottom of the meat are not exposed to the fierce upper heat of the oven, so instead of being turned into a crust they slowly drip into the roasting pan.

But those flavoursome juices are not lost. Cooks long ago discovered that the thick black liquid in the bottom of the roasting pan was brimming with taste, so they retrieved it. That’s how gravy was invented.

By adding stock or wine to the roasting tin and scraping up the hard bits and dissolving them, we rehydrate the dried-off meat juices and turn them into a rich-tasting gravy. Good gravies need meat juices, which is why artificial concoctions from a packet can never be anything but a pale shadow of the real thing.

It is obvious that meat must be roasted in a very hot oven. If the temperature weren’t high enough the juices would simply roll down the meat and into the roasting pan. The meat wouldn’t have the flavour-packed crust that gives roast meat its characteristic taste.

This is why we should never bake a good piece of meat in tinfoil. When the juices rise to the surface, the tinfoil protects them from the searing heat and they slide down to he bottom of the tinfoil pack. 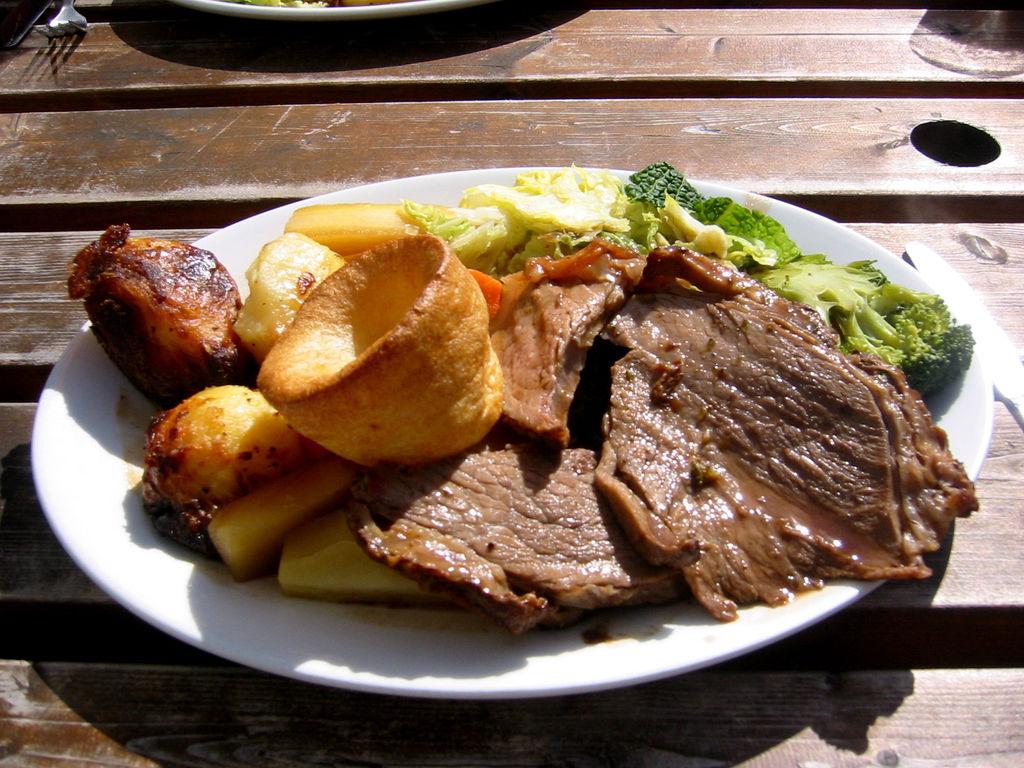 The juices then give off vapour instead of forming a crust and the meat is steamed, not roasted. We are left with a piece of meat minus a great deal of its flavour and no compensating tasty coating of the dry concentrated juices.

When I did that rather large standing rib roast 30 years ago, I fried all the surfaces in a very hot paella pan in order to form a crust as quickly as possible, thus avoiding an excess loss of juices.

I roasted it for only 40 minutes, without once basting it or even opening the oven door to have a look at it. It was beautifully rare and absolutely brimming over with flavour. I added a tiny amount of red wine to the pan juices and scraped up every little bit of caramelised juices.

I served deep-fried wedges of potato, Brussels sprouts sautéed in butter, cauliflower in a bechamel sauce and the ambrosial pan juices. It was one of the best Christmas Day lunches I have ever cooked.

The potatoes I serve with all kinds of roasts are absolutely splendid and are done in an unusual way I learned many years ago from Sally Wilson, the wife of Daily Mirror sports writer Peter Wilson, who spent his retirement years in Capdellá.

Sally put the peeled potatoes into cold well-salted water and brought them slowly to the boil. She immediately took the potatoes out of the water and let them cool own.

Sally started to deep-fry the potatoes about an hour and a half before they were needed. The cold potatoes were put into an electric skillet half-filled with very hot oil. I use a suitable wok with the necessary amount of virgen extra olive oil.

This process is repeated for about 90 minutes during which a thick golden crust covers each wedge of potato. It’s the up-and-down temperature of the oil that eventually produces the thick crust. When you break through the crust with the point of a sharp knife, the potato flesh is creamily soft.

But this method cannot be rushed. If you try to cut down on the frying time and the ever-changing temperature of the oil, the thick crust won’t take form.

My daughter, who first tasted Sally’s potatoes as a 12-year-old and adored them, has never been able to reproduce them for any of the two leg of lamb roasts she does every year. She tries to do the process in 30 minutes instead of 90 and ends up with quite ordinary deep-fried wedges of potato. They’re very edible, but Sally’s thick golden crust is totally absent.

Apart from my daughter, I have two Mallorcan friends who do a leg of lamb on one of the 12 days of Christmas. As I prefer my roast lamb underdone (extremely pink, as the French do it) I give it exactly 10 minutes per half kilo in a very hot oven and another 15 minutes cooling period in the oven with the heat turned off and the door open.

That means a 1.5 kilo leg off lamb is in the very hot oven for only 30 minutes, which is too little for most people. The shank is medium done but the rest if very pink, indeed. Most of my Anglo American friends prefer 25 minutes per half kilo.

But lamb is a very versatile meat that is delicious when roasted rare or medium and, in the case of my Spanish friends, when it’s extremely well done.

Those Spanish cooks who roast their lamb in wood-fired ovens at low temperatures are sometimes working with two-hour roasting times that include a great deal of basting.
When meat is roasted at low temperatures a greater amount of the juices end up in the roasting pan and that calls for constant basting. Spanish cooks ensure succulence by using a special mixture for basting their leg of lamb.

This roasting mix consists of wine vinegar (and sometimes fresh orange juice) plus dried and fresh herbs of one’s choice. As the leg of lamb (or a quarter of the lamb’s carcass) roasts at a very gently rate, a little of this mixtures is spooned every 10 minutes or so.
By the time the lamb is ready (two hours in the oven is normal) the roasting pan juices are truly scrummy and can be served as a gravy.

When you are eating roast lamb that was roasted at a friend’s home in the Spanish style you will always get succulent pieces of meat. But I never order roast lamb in a restaurant because all too often in the past it was roasted (and re-roasted) to the degree. And no meat can take that amount of roasting and still be delectable.

As I said at the beginning, animal flesh consists of muscle fibres held together by collagen, Mother Nature’s glue. If meat undergoes prolonged cooking of any kind, the collagen dissolves and the fibres separate — and we are left with mass of stringy tasteless meat.

But that won’t happen at home with the Sunday or Christmas Day roast if the meat is roasted for a short time in a high heat, or for a longish time in a low heat accompanied by lots of basting.