Alaro will have to wait some more, but I will be returning

A visit to the Es Verger restaurant in Alaro is rewarding at any time of the year, but for me, combining a winter visit with a walk to the castle is a must, where fresh mountain air, bird song, colourful fruits and a roaring fire await.

The drive up is an adventure in itself, where hairpin turns on a narrow tarmac road, strewn in places with potholes is not for the faint-hearted. But the views are nonetheless very pleasant, with Dwarf Palms, Cistus, Rock Rose, Rosemary and Marram Grass all adding some character amongst the rugged limestone boulders. Here the Common Kestrel hunts for rodents, Red-legged Partridge’s scurry about and Sardinian Warblers call loudly from the thick vegetation.

Reaching the car park, you are greeted by Sheep roaming here and there, and usually there is a large flock of House Sparrows feeding close by, with a Blue Rock Thrush nearly always around the restaurant roof tops or on one of the wooden electricity poles close by. Behind me is a single and very impressive Umbrella Pine.

Ahead of me stands an almost sheer wall of limestone, with a small building perched on the top, and if you look closely, several ropes hang on this face, evidence of people with a lot more courage and confidence than me, that have scaled the impressive cliff face. Only the circling Red Kites, Booted Eagles and Ravens have more confidence than the climbers. Avoiding the Sheep droppings, the first order of the day is a hot cup of coffee inside this mountain restaurant, where Carlos welcomes you with a smile almost as warm as the large log burner (which I always sit right next to).

Carlos and the other family members are warm hearted people, who love to welcome visitors from all over. A nice cup of coffee and a warm by the fire sets me up for a walk-up to the castle. So, after paying for my drink and checking that their local speciality is on the menu, I set off for a steady walk.

I slowly make my way along a twisting forest road, where the smell of wood smoke occasionally drifts past me, oh that fire is tempting me back down, but I push myself on. Aleppo Pines add a sweet smell to the air, and if I have timed it right, there will be some snow around, adding a blanket of whiteto the myriad of greens of the trees and foliage below. 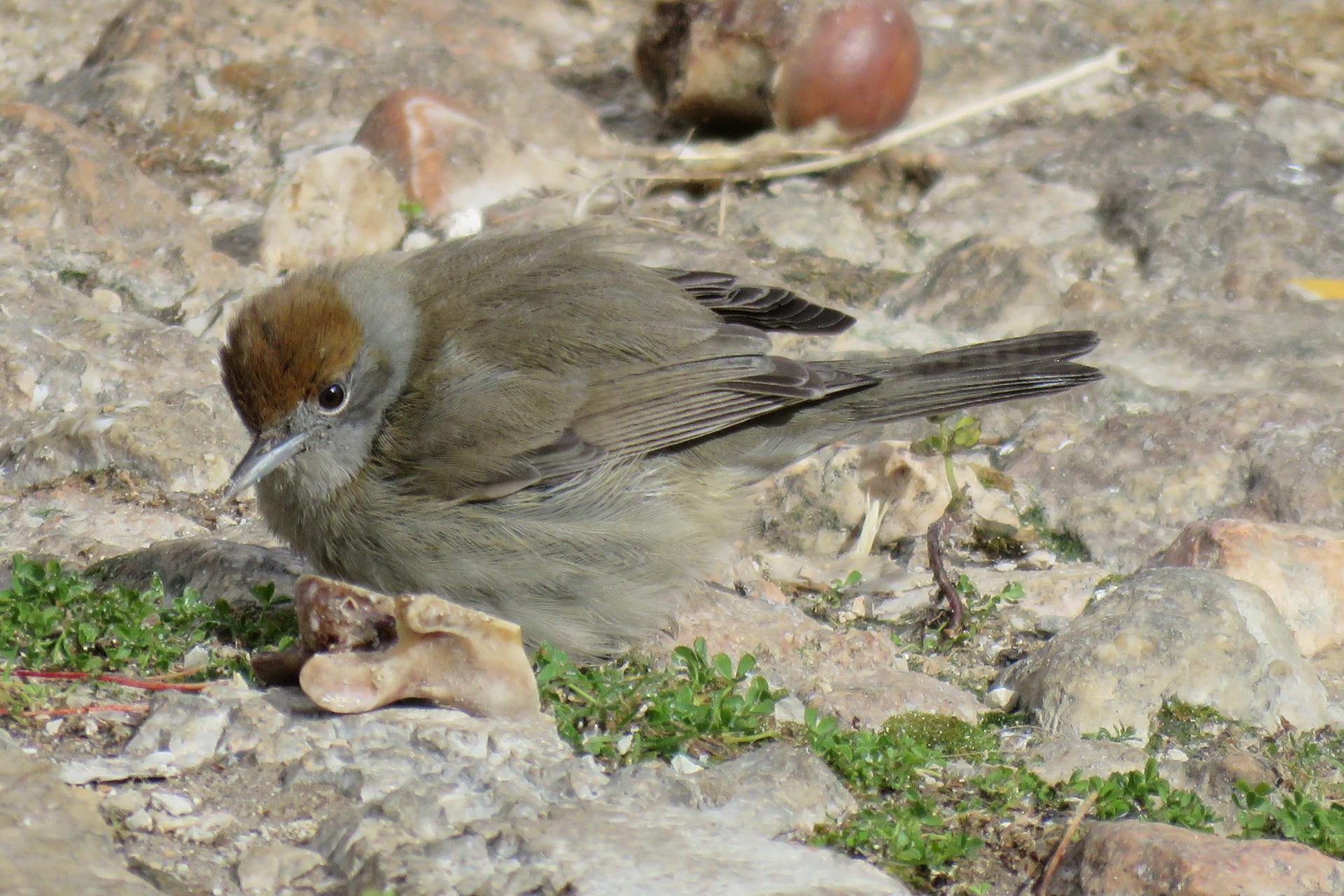 The occasional Silver Birch grow here and there, and Holm and Turkey Oaks break up the Pine sequence, and small slow torrents of water cascade down over the rocks, cross the paths and head off downhill, and sometimes a Chaffinch or Greenfinch can be seen taking sips of the cold, mountain water. If you’re lucky, the Common Crossbills will come down to drink at the little pools that have formed here and there. They eat the seeds of the pine cones so need a lot of water to quench their thirst.

Blackbirds and Song Thrushes are everywhere, and in the canopy, feeding away and almost undetected due to its tiny size, the Firecrest makes its way through the foliage. Winter visiting Siskins wander about in small feeding groups, adding a nice splash of yellow to the canopy. Rabbits scurry into the thick vegetation along the edges of the path and a Red-legged Partridge running quickly across the open path into cover makes for a comical sight.

Ahead of me, I can start to see the stone steps leading to the castle - nearly there. But there is one special tree I am on the lookout for along the way, and when the snow is down and the tree is in fruit, my job is made a lot easier. The fruits of the Strawberry Tree are, as the name implies, looking like Strawberries, turning from yellow to orange and then to a fiery red and with a dusting of snow on the tree tops, these fruits stand out amongst the white. They look very eye catching and command you to stop and take a closer look, but looks can be deceptive, they actually taste quite bland, but they are good for jams, liqueurs or spirits. The stone steps now lead me through a stone archway, and just around the corner the castle reveals itself, stood on a ridge with commanding views in every direction, with deep sided ridges flanking the scene, with the green fields of the valley floor way below. 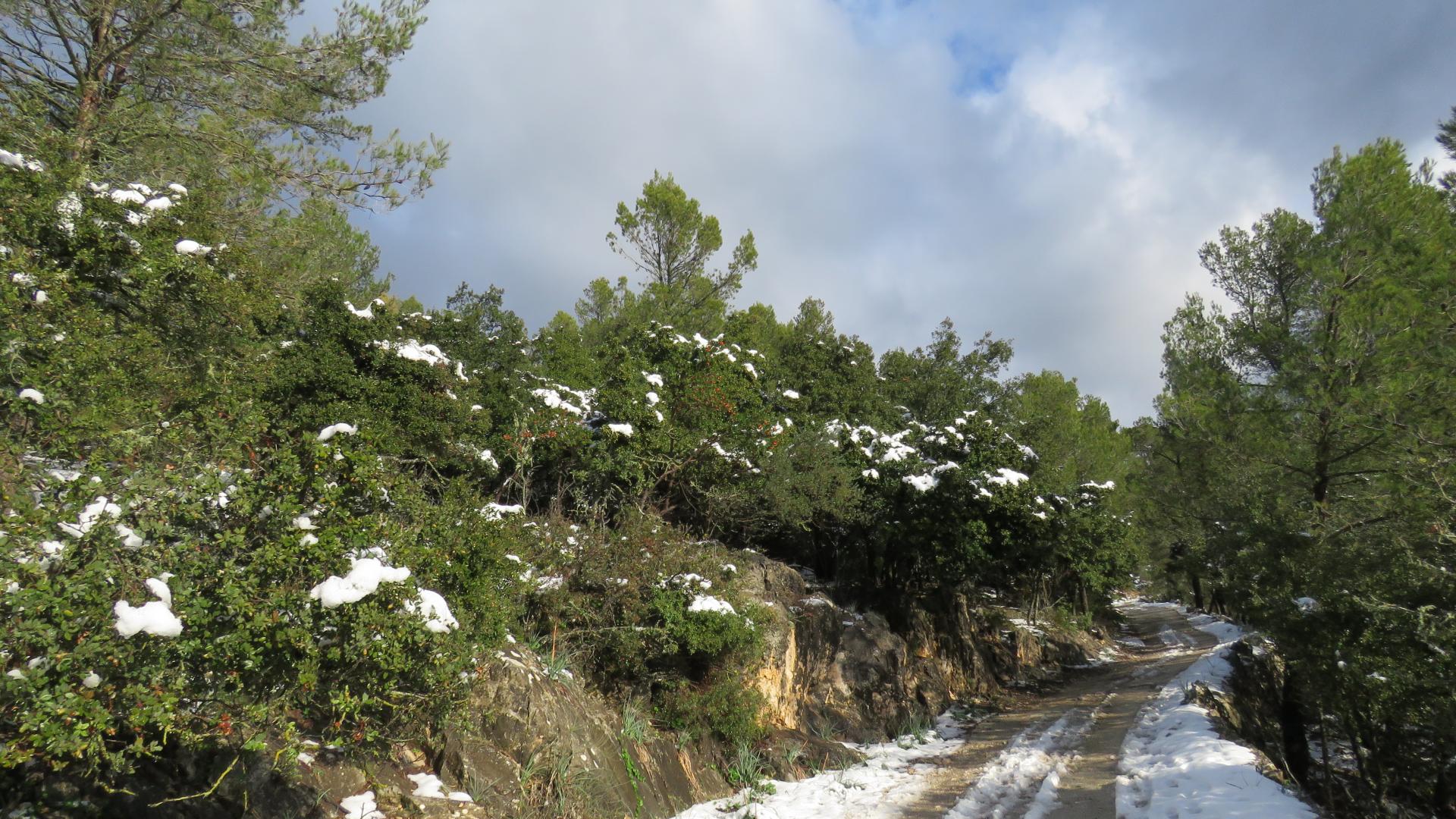 It is impressive to think of the sheer efforts gone into making the castle, but when you consider its strategic position, you can understand why. Here, the Blue Tit can be found.

Not an urban bird as you would normally expect elsewhere, but on Mallorca it favours a higher altitude (the woods beyond Lluc Monastery are another good high-altitude spot to see them). But there is a winter visitor that I am hoping to see around the grounds of the castle, not a new bird for me, but an exciting one all the same. Here, at least one pair of Alpine Accentors will be scurrying about for food, and they can sometimes be quite tame too, allowing plenty of time to watch them, and admire the delicate markings on their flanks.

Robins will be present and showing off their usual boisterous side, and the song of a male Blue Rock Thrush reminds other thrushes that this is its territory, its song echosing out across the vista. Sitting down here on the edge of the slope, scanning overhead for raptors and soaking up the scene below, only pure thoughts come into my mind. The cold but fresh mountain air makes me feel that little bit healthier, and a soft breeze will rustle through the canopy of the Oaks. The occasional waft of wood smoke however, tempts me yet again, and so I break away from this peaceful scene and slowly make my way back down, this time for some dinner and then another legendary coffee.

I take the same route back to the restaurant, but there is always something different to see that you missed on the way up. Hairy Curtain Crust fungus for example is on the one side of an Oak, I missed that on the way up. And some Rosemary is still in flower and close by, a Boletus fungus has been knocked over, perhaps by a Rabbit or Genet, who knows, and the local Slugs have started to nibble at the large cap.

As I approach the restaurant, that lovely wood smoke smell fills my nostrils, but before I go back inside, I am looking around the yard outside, as this spot (in the winter) is where Blackcaps can be seen in good numbers, and allow for some very close views. My picture for example is of a female eating the marrow from a discarded bone. A few Black Redstarts will be present as will the more numerous Chiffchaffs and that ever-present vocal little resident, the Sardinian Warbler.

I am greeted once again with a warm smile, and I am in luck, the seat next to the huge log fire has my name on it, so I sit down, warming myself back up which doesn’t take long, and quickly ordering a meal fit for a king, with a bowl of Olives on the side, and a small beer (just the one I promise). Other people are coming and going, walkers, mountain bikers, the occasional family. 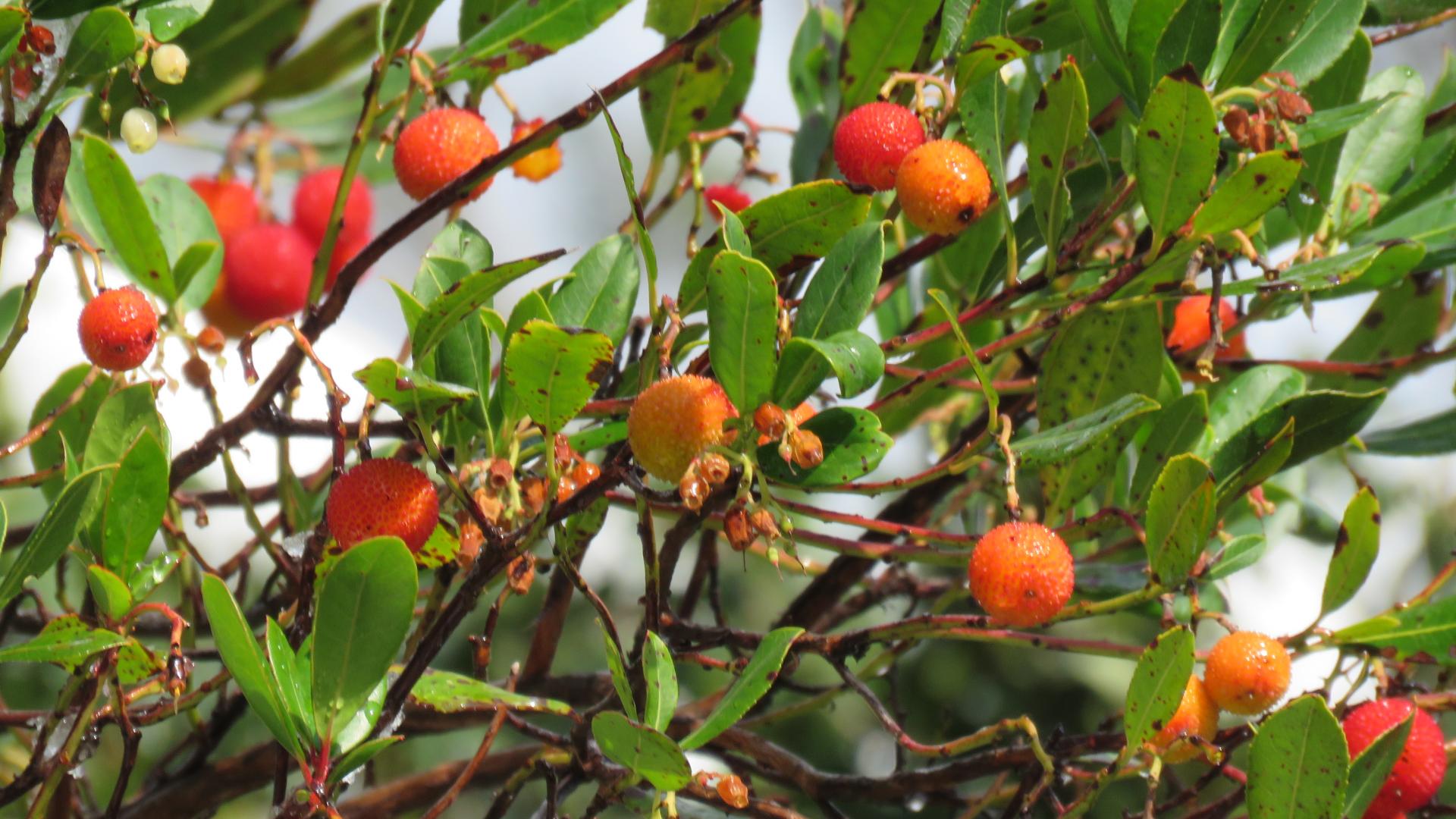 The scene gives accents from many different languages, many different clothing styles and everyone at some point standing in front of the fire and rubbing their hands together. I sit here watching the antics of others, enjoying the old farming implements adjourning the thick walls, admiring the thick stone slabs on the floor, and allowing the smell of the Olive wood to waft onto my clothes so I can savour that smell on the drive back down.

One year when I sat inside doing this very thing, a television crew came in and wanted to get some footage for a television documentary they were preparing, and as I was sat down enjoying my dinner, I was asked if I would be prepared to be included in the footage. Of course, I said yes, and a few weeks later, I was sent the link to watch the whole scene.

So, there I was, on ‘Ben a Prop’, I wish they had airbrushed me a bit though. Soon, I leave this restaurant and all of its charm and character behind me, and head back down to level ground to spend the afternoon at another site. Alaro will have to wait some more, but I will be returning.