There aren’t all that many restaurants doing calçotadas

Aubergines were strictly a summer veggie and during the hot sunny months. | JULIAN AGUIRRE

Cultivators all over Europe (and especially in Spain) not so long ago started to grow vegetables and fruits in plastic tunnels and many previously seasonal foods became available all year long.

There was a time when access to fresh tomatoes stopped with the end of summer. Those who wanted them for the winter had to conserve their own in jars or buy them in tins.
Aubergines were strictly a summer veggie and during the hot sunny months Mallorcans made the most of the season and pampered themselves with dishes such as tumbet and aubergines stuffed with minced meat or fish.

And even today, when you can buy aubergines from January 1 to December 31, there are still some punctilious Majorcan housewives, and even a few conscientious restaurant cooks, who wouldn’t even consider making a tumbet out of season.

But a small number of fruits and veggies have managed to avoid the tunnel technique and they still have a certain date when they suddenly appear — and another when they slink away until the following year.

One of these has just started a return visit. It is calçots, a Catalán speciality (particularly in the Tarragona and Vals areas) that looks like a cross between a thin leek and a thick spring onion.

The calçots, which means trousers, are grown in a special way: the seeds are planted deep in the ground and when shoots start to appear they are covered with earth. As the shoots break through again, more earth is piled on top.

This is how white asparagus and Belgian endives are cultivated. In all three cases, the vegetables don’t see any sunlight and photosynthesis can’t take place — so they remain white instead of turning green.

Until relatively recent times this was a tradition Majorcans read about in the press or heard from friends. But some enterprising supplier started to bring the calçots over from Tarragona and they were available at the Mercat d’Olivar.

Three or four professional cooks got in on the act and calçots were suddenly being offered in the dining rooms of restaurants on the outskirts of Palma.

But the cooking and eating of calçots is something that is done in the country or, at least, in the open air. It’s not something you do while sitting at a table — especially in a restaurant’s dining room.

So there aren’t all that many restaurants doing calçotadas.

The calçots are cooked over, or in, hot ashes. The connoisseurs do them in the ashes of a huge pile of grapevine twigs — which adds subtle layers of extra flavour.

When the twigs have reduced to glowing ashes, the calçots are laid on top and then covered with more embers and ashes. They are left there for 10 to 15 minutes, depending on how thick they are.

As soon as the blackened calçots are plucked from the ashes, bunches of them are wrapped in several sheets of newspaper and left for another five minutes or so. This finishes off the cooking of the interiors and makes them lusciously soft.

The outer skins of the calçots are burned black and have to be peeled off in one quick and slick movement.

The experts take the top end of the calçots in the left hand and use the right hand to give a deft and rapid pull of the burnt outer skins, which slip off as if they were a trouser leg — thus the calçots name of this dish.

If you try to get at the white part of the calçots by scraping away the burnt outer skins, it’s a cumbersome and messy chore and you end up with mucky hands, like a miner’s after an eight-hour shift.

But there is more potential mess to come, because there is a knack to eating calçots, just as there’s that little trick to pulling off the blackened outer skins.

When you are left holding the long limp white part, it is dragged through a bowl of sauce and eaten like an asparagus spear. But it is much more flaccid than asparagus and swings about in mid-air as you try to eat it. 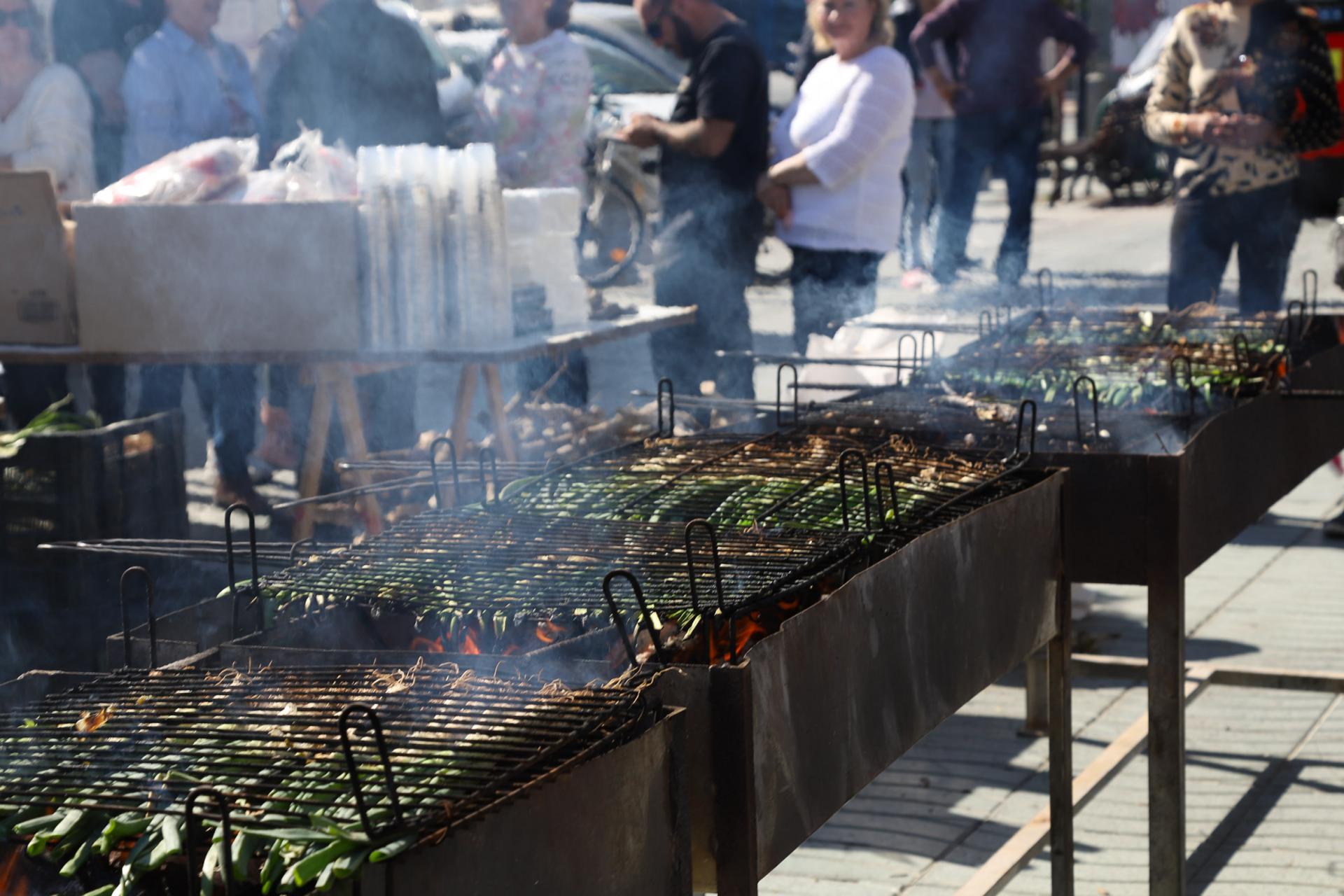 The final eating is done by lifting the sauced calçot high in the air, tipping back the head, and then carefully lowering the calçot into a wide-open mouth. It’s not exactly an elegant way of eating, but the combination of the smoky onion taste, and the highly flavoursome sauce, is a gustatory sensation we don’t come across very often — one of the reasons a calçotada is such a popular event.

Anyone used to cooking on glowing embers will have realised that doing calçots this way presents yet another problem.

It’s easy enough to put a stack of calçots on the embers, but taking them off one by one when burnt black and very hot would be a huge and filthy chore. But tradition long ago solved this snag.

The ends of the calçots, the thickest part, are threaded on to a piece of wire. Its length depends on the width of the embers, and that is decided by the number of calçots that have to be roasted.

When the calçots have been threaded on to the wire, two people take one end each and place the calçots on the ashes. The wire is long enough to leave both ends well clear of the heat.

The calçots are later plucked from the ashes in a single movement: a neat wire act that saves a lot of bother. Smallish bunches of calçots are then wrapped up in sheets of newspaper.

In the old days the ingredients were pounded with a pestle in a mortar, but nowadays most cooks would blitz them in a blender. 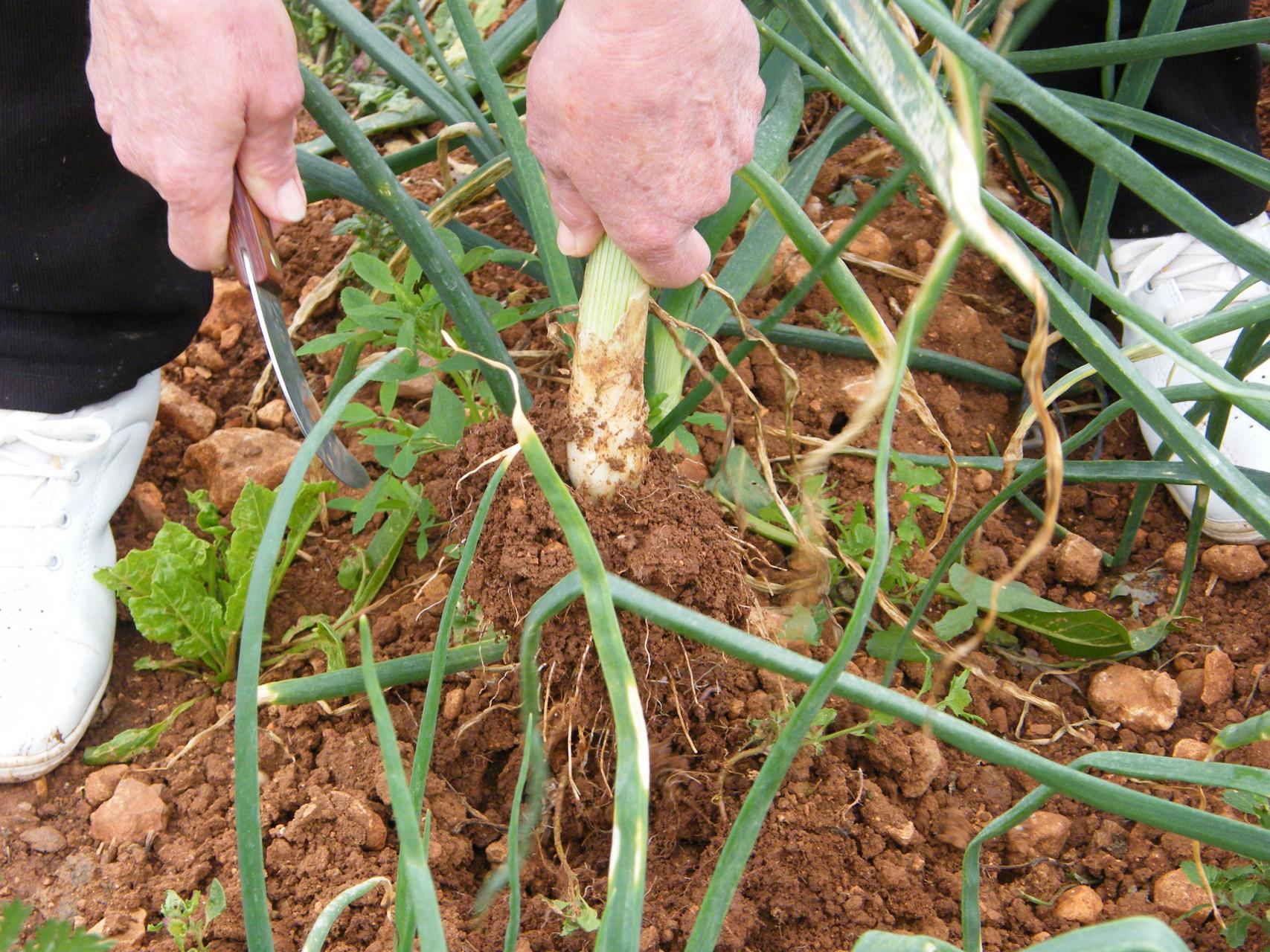 How many calçots per person does one serve? Some say 15 is a good portion but many people end up wanting more. One Catalán cookbook recommends 25 per person but another one, published in the 1950s, says 50 per head is normal.

At a traditional calçotada in Tarragona. The sauced calçots are placed on a thickish slice of country bread before being lifted into the air and then lowered into the mouth.
This is rather like the English trencher of medieval days — the slice of bread that served as one’s plate.

The juices and the sauce of the calçots seep into the bread and make it very tasty. So you end up eating your plate.

Wine at a calçotada is always drunk from a porrón, a traditional jug-like container with a long spout that is held up in the air to allow the wine to trickle out and into the mouth.
Like the swallowing of the sauced calçots, drinking from the porrón is another moment when one’s blouse or shirt may end up heavily stained.

At a calçotada, the calçots and their salbitxada sauce are just a good fun starter — they are followed by chargrilled butifarra (a thick fresh sausage) and lamb chops.

At one time the traditional dessert was spongecake served with preserved cherries, but nowadays it is usually one of the family’s favourite sweet dishes.

It wasn’t until the late 1980s that we began to see calçots in Majorca and a bit later some Mallorcan families got into the calçots mode. 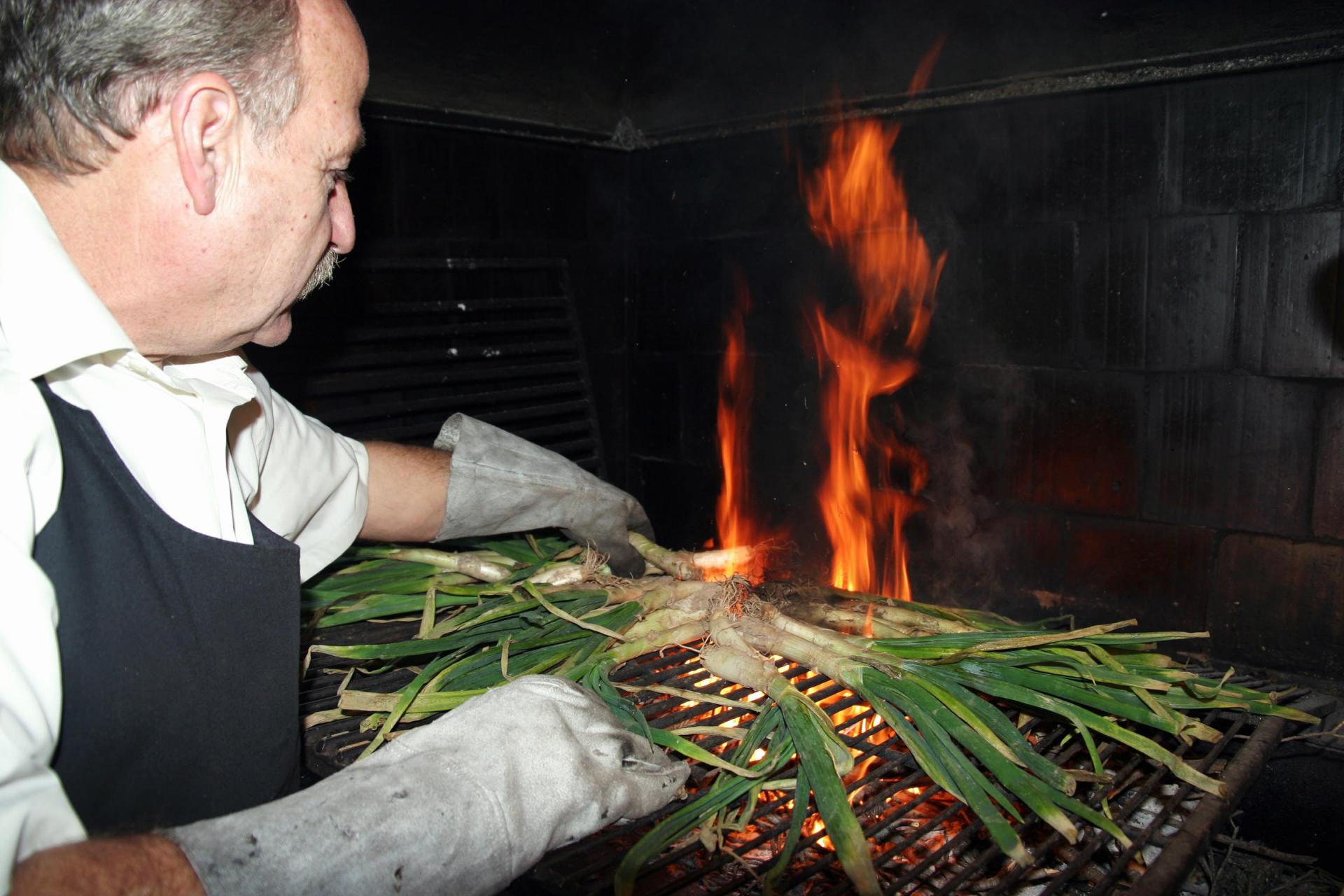 By the mid-1990s two or three restaurants were doing calçots, but no others took it up. The calçotada is strictly bucolic and needs an outdoor setting.

A much better idea is to get together with some friends and do it yourself. But remember to wear your oldest sweaters, jeans, blouses and shirts — those you should have binned ages ago. They’ll be good enough for a calçotada…if they still fit.

Connoisseurs can tell at a glance that the salbitxada sauce for calçots is Catalán — because hazelnuts are used and in Catalonia they are a favourite stabiliser for sauces and other dishes.

The Cataláns (and the Mallorcans) are also dab hands at making an ancient garlic sauce that calls for a simple everyday stabiliser. In this case the sauce is called aioli in Provence, allioli in Catalán, alioli in many parts of Spain and ajoaceite in the south of Spain.

In every case the words mean garlic and oil and that was the original garlic sauce — garlic pounded to a paste into which olive oil was drizzled to make an emulsion.

Making an emulsion of garlic and oil (in other words, a sauce) is a bit of a hit and miss affair. Even when you hit the bull’s eye and achieve a beautiful puffy emulsion with an oily sheen, it’s so unstable it can fall into a runny mess in the blink of an eye. And more often than not it does. So a garlic sauce needs a stabiliser.

The original Provençal aioli was made with a bread stabiliser. But going further back to the Roman poet Virgil (70-19BC) he was fond of making an emulsion of olive oil and garlic as an appetiser and he also stabilised it with bread.

Some of the housewives and professional cooks of the old school in the Baleares and Catalonia, still make garlic sauce with olive oil and bread.

You can also make the emulsion hold by stabilising it with ground almonds, hazelnuts or mashed boiled potatoes. In Majorca and other parts of Spain, the most popular stabiliser these days is boiled potato. It is mashed into the pounded garlic before drizzling in the olive oil. 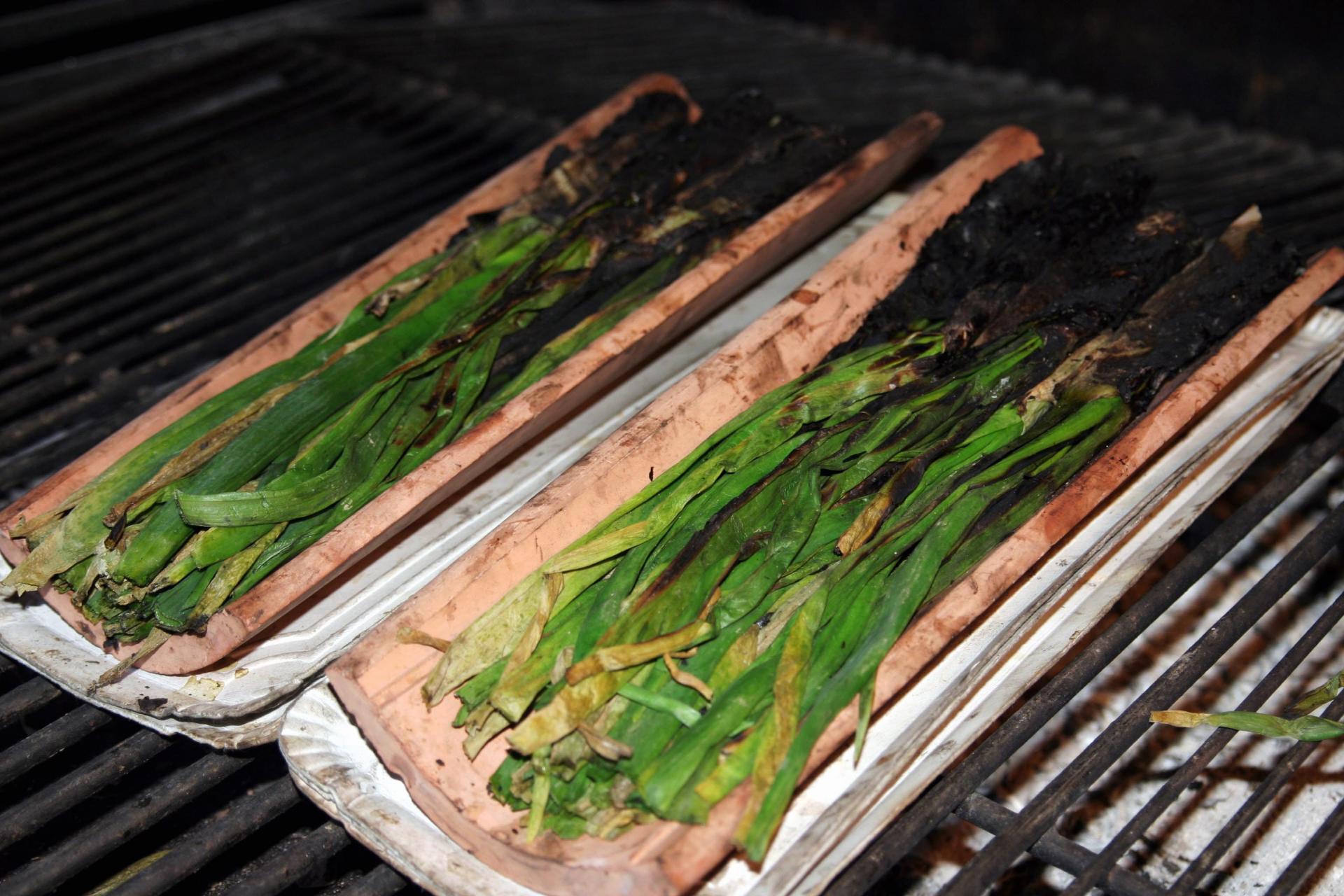 To make this kind of garlic sauce you need three large and very firm cloves of garlic. The plumper they are the better. You will also need 100 grs of boiled potato and as much virgen extra olive as necessary to achieve the consistency of ordinary mayonnaise. The boiled potato should be tepid, never cold.

First pound the garlic cloves in a mortar with a little salt until they are reduced to a smooth paste. Then add the tepid boiled potato and continue to pound until it is well blended with the garlic paste.

Drizzle in the olive oil slowly, as you would for an ordinary mayonnaise. You must stir the mixture with the pestle and always in the same direction.

If you want to try it with bread, use 100 grs of crustless Mallorcan pan moreno. It should be soaked in warm water and squeezed very dry. Add it to the garlic paste and continue as above.

A garlic sauce made with bread or mashed potatoes doesn’t have the velvety finish of those made with egg yolks, but it is a good deal more digestible.

You must buy plump firm garlic cloves that are as fresh as possible — so avoid those that are sprouting little green shoots in the centre. These are a sign of approaching old age and are not fresh enough to guarantee a successful garlic sauce.

Apart from making it easier to form an emulsion, the potato or bread also tempers the garlic and produces a less pungent sauce. But even so, this sauce is strictly for impenitent garlic fiends.