Green is considered to be the most nutritious | Marc Fosh

With spring in the air it’s time to enjoy the asparagus season once again. For some, asparagus has always been a bit of an elitist vegetable and a symbol of epicurean taste; it was thought to of originated in the eastern Mediterranean region and was cultivated by the Romans and Greeks as long ago as 200bc.

It was highly valued for its medicinal properties as it was said to help restore eyesight, ease toothache and cure a bee’s sting. I’m not convinced about its magical healing properties but I do love asparagus for its crisp texture and its wonderful, grassy flavour.

There are actually many types of asparagus but for most of us it’s a simple choice between white and green, although a purple asparagus was developed in Italy but it is rarely seen in local markets here or anyway outside of Italy. The big difference between white and green asparagus is in its growing method. Simply put, white asparagus is grown “underground” or at least under earth. Farmers cover a thick mound of dirt over the white asparagus as it grows or cover it with black plastic to ensure that not a single ray of sunlight hits the spears, a process known as etiolation.

Green is considered to be the most nutritious when comparing purple, white and green asparagus, as it contains potassium, calcium, vitamins B and C, folic acid, and beta-carotene. It also has the most fibre of the colours.

Growing wild throughout the Mediterranean, asparagus loves secluded hedgerows and undisturbed country roads. Wild asparagus or “Trigueros” as they are known in Spain, grow all over the Island of Majorca in March. The locals spend hours scouring the fields and roadsides filling their baskets with them. In certain parts of Spain the search for wild, green asparagus is regarded almost as a sport, requiring sharp observation and a somewhat reckless spirit, as finding them is no easy task.

When choosing asparagus, look for firm, brightly- coloured spears with tight, crisp tips. (Very large stalks tend to come from older plants and can be tough.). If the stalks bend without breaking it’s a good sign that they have definitely seen better days. Asparagus is usually boiled or steamed, but can be grilled or roasted for a different, slightly nutty flavour. There is a special asparagus pan (useful but not necessary) that allows the spears to stand upright in boiling water, while the steam gently cooks the more delicate tips.

But you can cook them simply in a large pan of boiling water, cover and boil anywhere from 3-6 minutes – this will depend on the size and freshness of the spears. (450g should be enough for 2 people.). The classic accompaniment for steamed or boiled asparagus is hollandaise sauce but all fish and shellfish dishes, roast lamb, wild mushrooms and truffles can also be perfect partners along with anchovies, aioli, new potatoes, smoked bacon and cheese sauce. 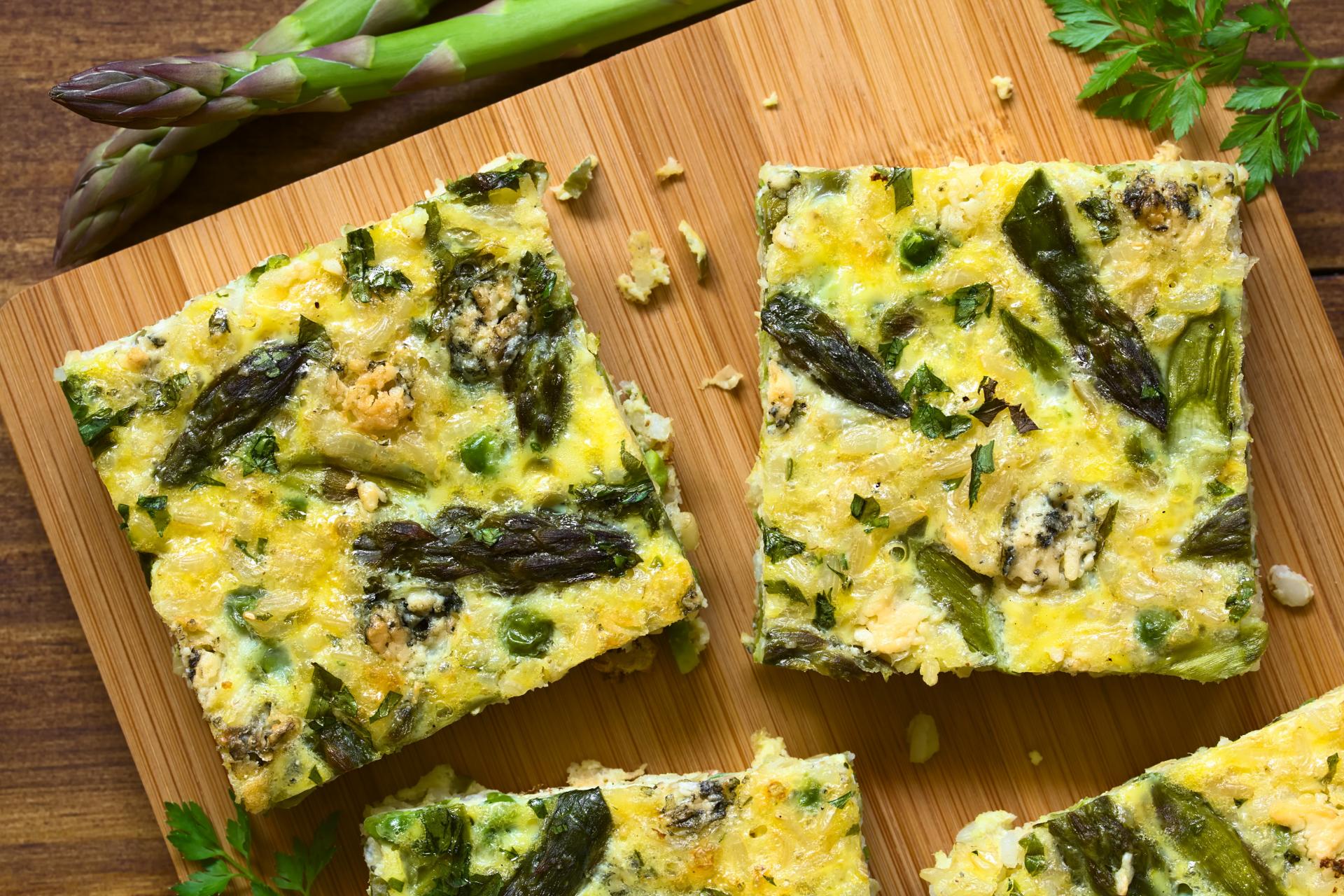 1 Put the potatoes in a pan of cold salted water and bring to the boil. Once boiling, cook for 2-3 minutes until nearly tender, and then add the asparagus tips for a final 2 minutes. Drain well.

2 Meanwhile, heat the olive oil in an ovenproof frying pan and add the chopped onion. Cook for about 2-3 minutes until softened.

3 Mix the eggs with half the cheese in a bowl and season well. Pour over the onion in the pan and scatter over the asparagus and new potatoes. Top the frittata with the remaining cheese and place under a hot grill for 4-5 minutes to set. Leave to cool slightly and slide the frittata onto a large plate. Cut into wedges and serve with dressed rocket leaves. 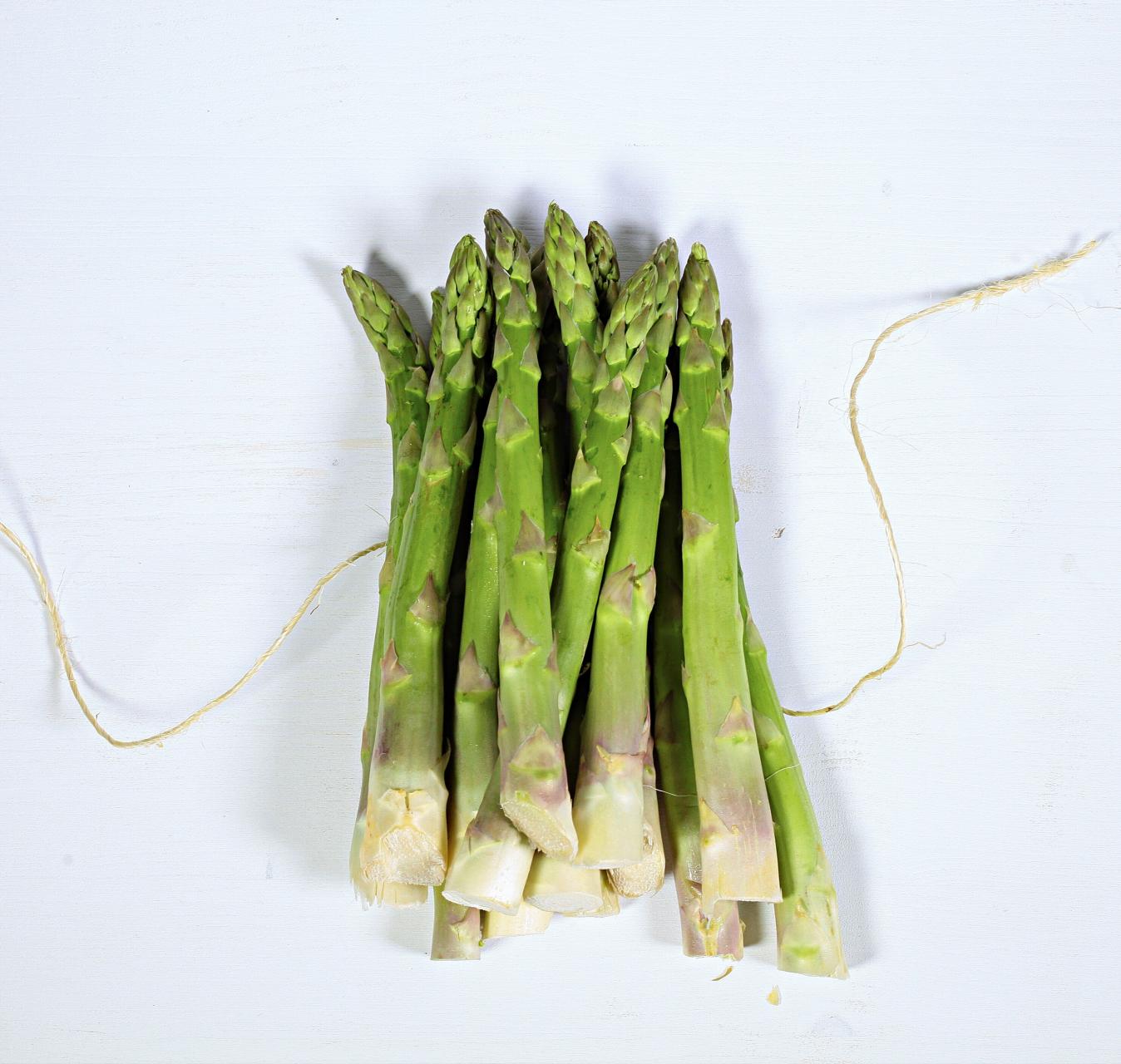 1 Whisk the lemon juice with the mustard and honey and pour in the olive oil while whisking. Stir in the capers and chopped chives. Season with salt & pepper

2 For the asparagus, peel the stems with a potato peeler. Boil in salted water for 12-15 minutes until the spears are tender. Drain well.

3 Divide the warm or cold asparagus between 4 plates. Lay the ham on top and drizzle over the dressing.

1 Place the salt cod in a saucepan and cover with the milk. Add the onion and saffron; bring slowly to the boil.

2 Remove from the heat and leave to infuse for 10 minutes. Remove the cod and add to mashed potatoes.

4 Divide the “Brandada” between individual earthenware dishes; add 2 slices of chorizo and 2 or 3 asparagus tips. Bake in a hot oven for 6-8 minutes and serve.