Sitting down outside at Cafe 1919 by the harbour in Puerto Pollensa, I watch one of the world’s rarest gulls drifting by overhead, and landing on the soft, glistening sand of the nearby beach. It was 1990, during my first ever visit to Mallorca. Just out on the exposed rocks sit Sandwich Terns and several Shag, with Yellow-legged Gulls noisily keeping them company. I am in my element, sipping a beautiful coffee after a morning’s bird watching, and watching probably the rarest gull I will ever see. I would like to see them a bit closer, so noticing they were spending a lot of time along the beach, I went for a closer look. 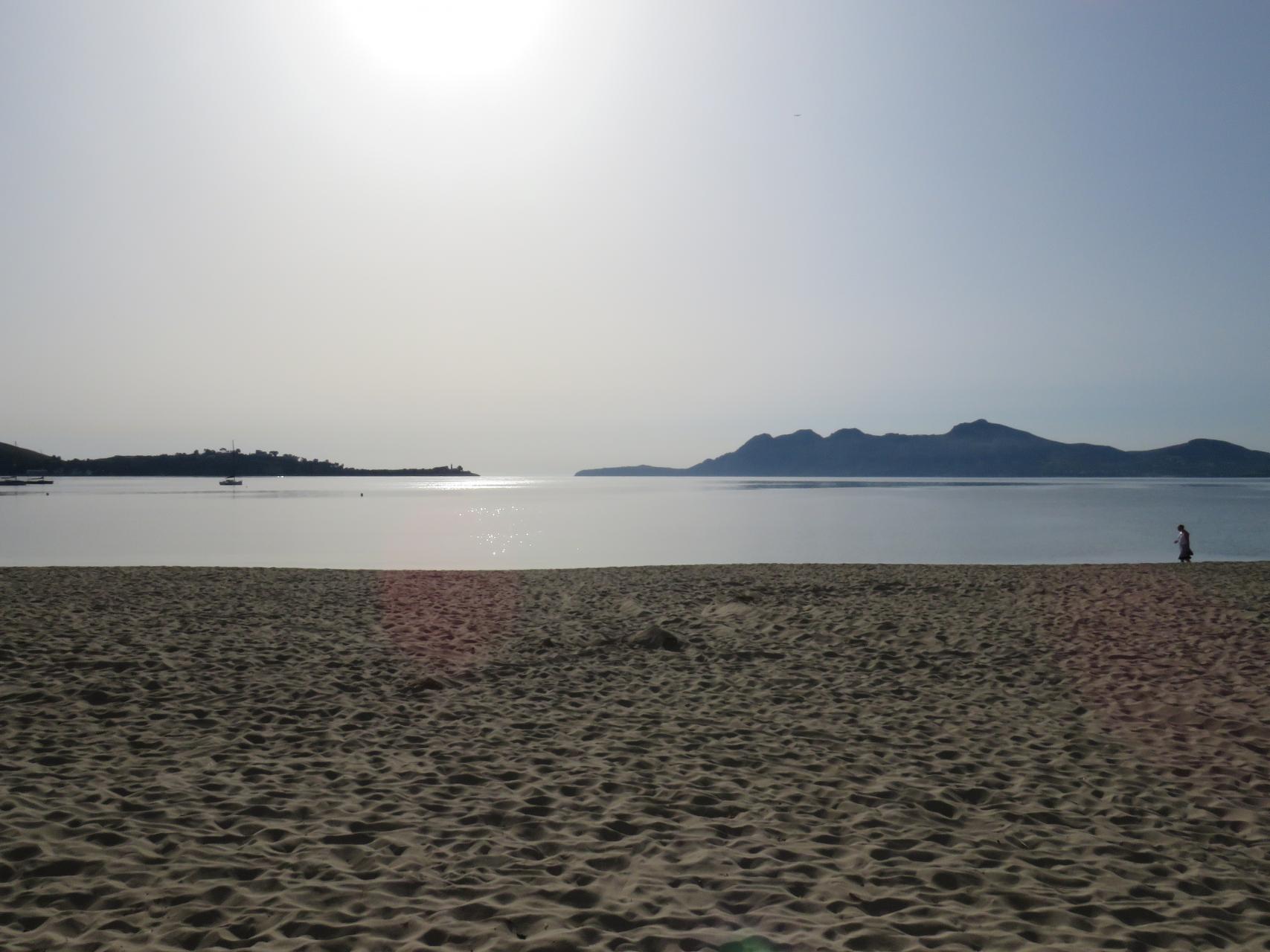 In fact, it is not afraid to venture close to people, and the beach along Puerto Pollensa is a reliable place to see them. Now, life for me occasionally has its mishaps, and if anyone is going to get themselves into a spot of bother it is usually me. And one such time springs to mind when getting excited at getting close to an Audouin’s Gull. I set off to get a closer look. So here I am, with a pair of binoculars and a camera around my neck, shimmying past the bathers, getting closer to the gull, then starting to take a few pictures in case it flew off. This continued for a little while, a bit closer, a quick photograph, a bit closer, another photograph. Soon enough I got that special shot just before the bird took flight. On turning around however, I noticed that all of the bathers had covered up their white bits. It then dawned on me that they had probably not even noticed the gull I had been photographing, and had possibly assumed I was more interested in them. When you have binoculars and a camera on a beach, no amount of explaining is going to convince the nervous bathers that your intentions were sincere. So, what seemed like a long embarrassing walk back through the bathers to the road ensued. Oh, it’s always me. I have a knack of getting into strife. 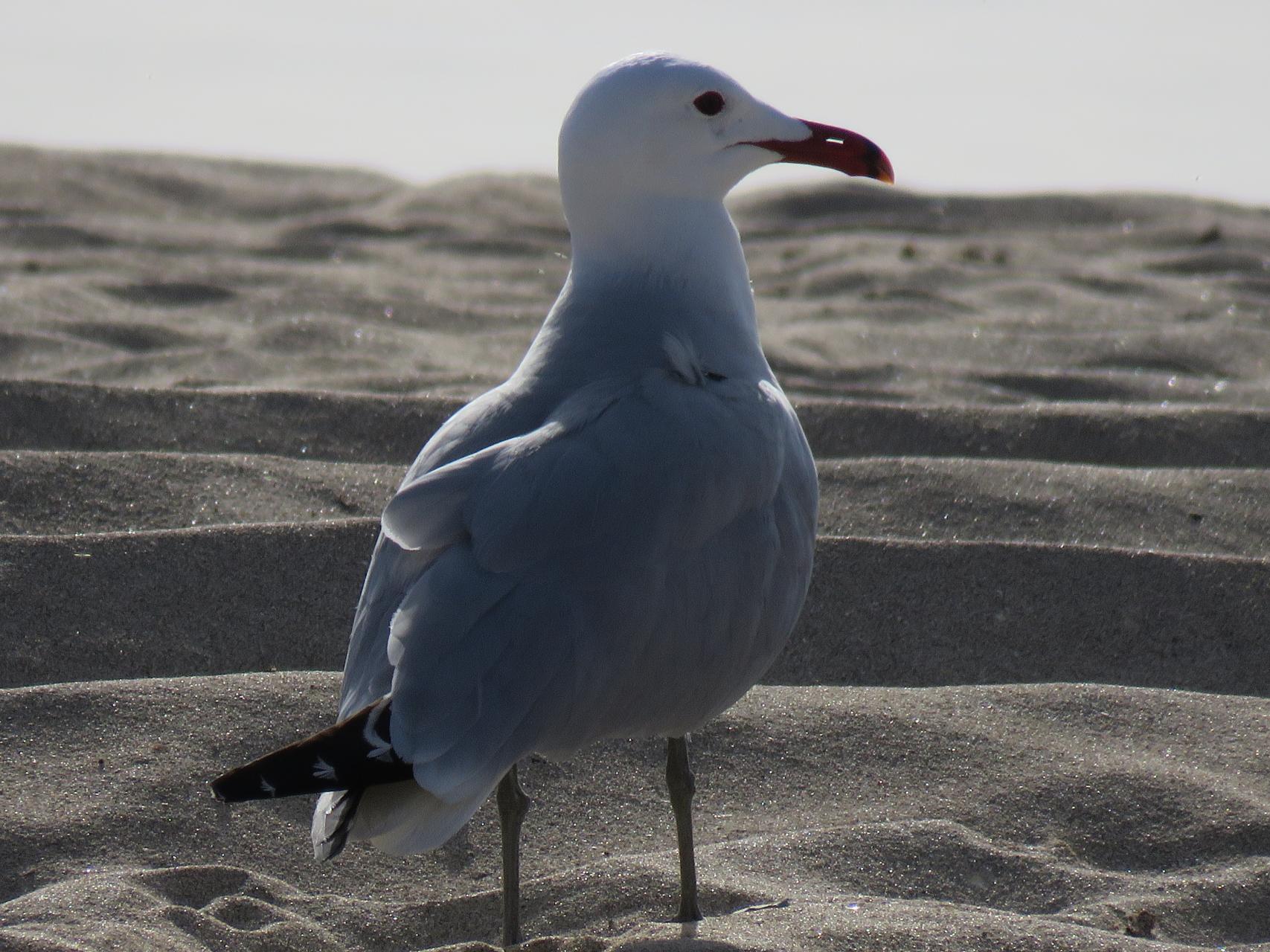 Audouin’s Gull (Ichthyaetus audouinii) is a large gull restricted to the Mediterranean and the western coast of Saharan Africa and the Iberian Peninsula. Its genus name comes from Ancient Greek, with ‘ikhthus’ meaning ‘fish’, and ‘aetos’ meaning ‘eagle’. The specific ‘audouinii’ and the English name are from the French naturalist, Jean Victoire Audouin. In the late 1960s, this was one of the world’s rarest gulls, with a population of just 1,000 pairs. New colonies have since established, and the population is now around 10,000 pairs, however, they still remain a rare gull. Surprisingly, they will happily feed at night, and often well out at sea, and also surprisingly (unlike other gulls), they do not scavenge, but are a skilful fish eater. More often than not though, they are seen patrolling slowly close to the beach, occasionally dangling their legs to increase drag. Thankfully, they are also one of the species to which the Agreement on the Conservation of African-Eurasian Migratory Waterbirds (AEWA) applies.

The voice consists of donkey-like calls, and a ‘mew’ call. They are 48 - 52cm in length, with a wingspan of 127 - 138cm and a weight of 350 - 450g. The nest is a shallow scrape on the ground with a lining of feathers and plants, where 2 - 3 slightly glossy, olive-buff eggs with brown blotches and spots are laid. Food consists mainly of fish, but sometimes invertebrates, insects and even plant material is taken. They are an elegant gull, with slender wings and a noticeably large red bill with a black and yellow tip. The mantle looks a silvery-grey in flight, with trailing white edges that have contrasting black tips to the primaries. The legs are black. As gulls go, they really are elegant looking, with soft features and a real character to them. 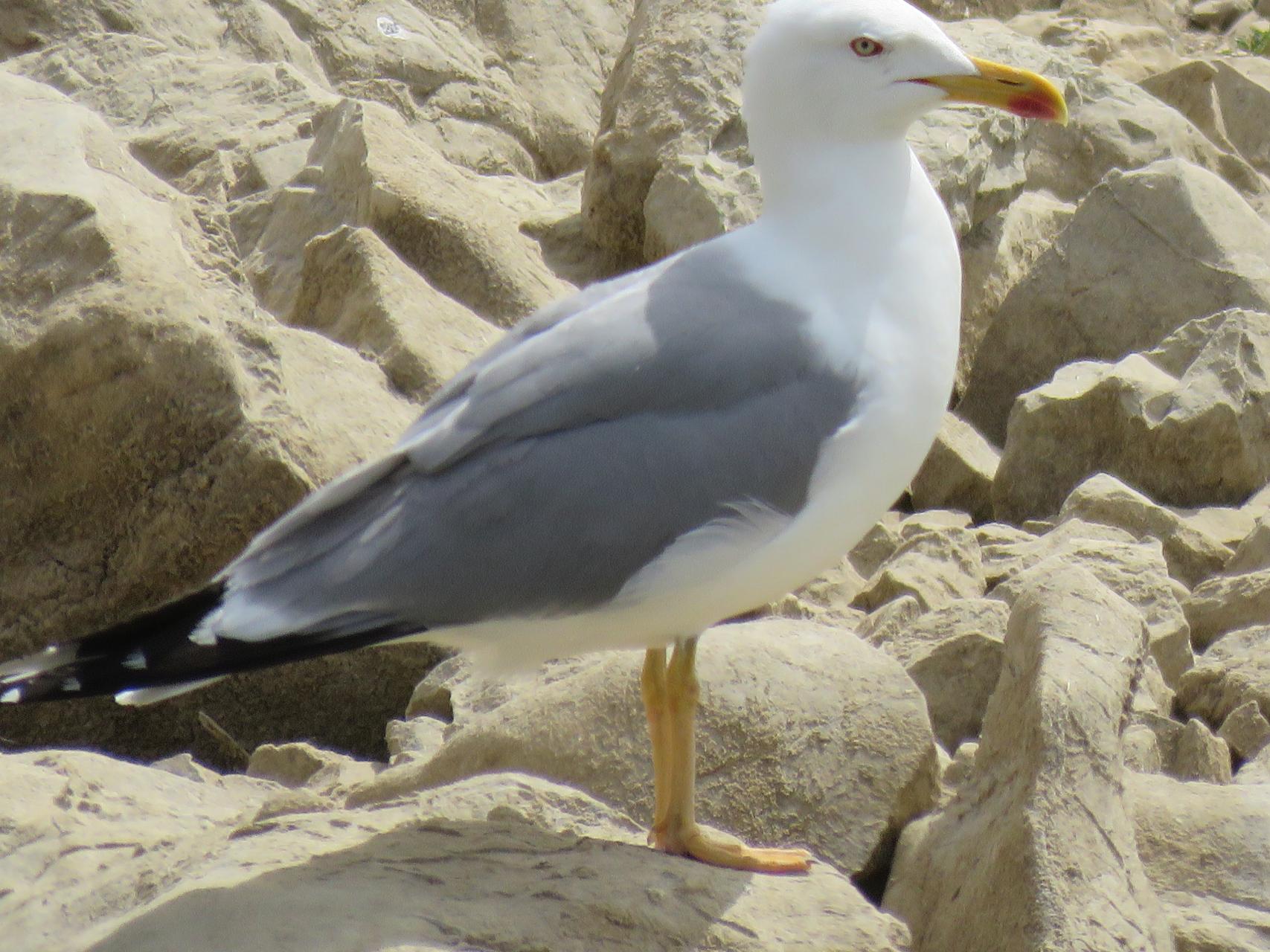 In contrast, the Yellow-legged Gull (Larus cachinnans) is another large gull found in Europe, the Middle East and North Africa. They are now widely accepted as a distinct species, after formally being classed as a sub-species of the Herring Gull. The genus name comes from Latin, and ‘larus’ appears to have referred to a gull or other large seabird, whereas the species name honours the German zoologist, Karl Michahelles. DNA research, however, suggests that the Yellow-legged Gull is actually closest to the Great Black-backed Gull.

Unlike the Audouin’s Gull, they are omnivores and very opportunistic foragers, equally at home scavenging around rubbish tips as well as seeking out prey in fields, on the coast, or even robbing smaller seabirds of their catches. If need be, they can shift their diet to that of a predatory nature, and this was observed in Italy during the lockdown of 2020, where the lack of food scraps seen them preying on Rats and Rock Doves to compensate.

Although I watch them around the coast, I also enjoy watching their antics at Cuber Reservoir, where groups of them will descend down to the reservoir. At other times, they call from the high ridge that leads along towards Puig Major (seen from the left path as you head back towards the car park). Here they are noisy and squabbling, and showing who is boss - that is until a Black Vulture or Booted Eagle strays too close for comfort to the ridge, which sees them disperse rather quickly down to the safety of the water, only returning to the cliffs when they are sure danger has passed, and their confidence returns once more.

Larger than the Audouin’s which it shares the coast with, they are 55 - 67cm in length, with a wingspan of 130 - 158cm and a weight of 800 - 1000g. Their voice consists of long ‘aahhoo’ calls and deep chuckling notes. The nest is a large and untidy cup of vegetation on the ground, where 2 - 3 olive to brown eggs are laid, with darker spots and blotches. They consume a wide range of fish and marine invertebrates; plus, anything they find by scavenging. What makes them distinctive are the yellow legs, with a darker grey mantle. At all times, the bill is a rich yellow and has a large red spot near the tip of the bill.

Adapted to modern feeding methods, they can be seen following fishing boats and scavenging on any waste. They are now far more common than any other gull in the Mediterranean. Although nowhere near as elegant looking as the Audouin’s, they are a characteristic bird in their own right, and during sea watches from Portocolom, Far de Cap Ses Salines, Alcudia Bay and many other places, I have watched them harass Audouin’s Gulls and Sandwich Terns if they think they are carrying food, and even appearing to be harassing Balearic Shearwaters on occasion. Gulls can tend to be overlooked, but the next time you see these two species, stop and watch them, especially up close, and see for yourself the different characteristics and features they have.