My first ever visit to the Albufera Marsh, was with my late father (John), a keen bird watcher who introduced me to the hobby from an early age. As soon as we left the road and walked onto the reserve we could hear a loud call, but couldn’t see what was making it. As we walked on, we heard it more often, and as we approached the reserve centre, a small brown bird came into the open on the edge of the Giant Reeds and belted out that same song - it was a Cettis Warbler (Cettia cetti), a new species for both of us. The mystery of that call was solved.

But ever since, and for many other people too, the call is heard but the bird can be seldom seen, as they are a real skulker, hiding deep in the foliage, only showing themselves briefly. My aim is to one day get a decent picture of one out in the open. I will have to be quick. The bird is named after the 18th century Italian zoologist, Francesco Cetti. Numbers have increased significantly across Europe since 1990, with the current population estimated to be 600,000 - 1,600,00 breeding pairs. The call is a sharp ‘chip’, and once learned, the song is loud and unmistakable. They are 13.5cm in length with a wingspan of 15 - 19cm and a weight of 9.9 - 15.9g. Bushy places, reedbeds, watersides, marshes, and scrub areas all form their habitat, where an untidy nest consisting of an outer shell of dead leaves and grass is constructed, with a deep inner cup which is finer lined. Four bright chestnut (or deep brick-red) eggs are laid. Food consists mainly of arthropods such as small, soft-bodied insects and larvae, which they prefer because they can digest them faster, but they will also eat Spiders and Earthworms.

Sexes are similar, but the male is larger and heavier than the female. The upperparts and wings are a uniform chestnut brown, and the face is broken only by an off-white eye ring, and short grey supercilium. The chin and central underparts are off-white, with the rest of the plumage a grey-brown or darker-brown, especially on the flanks and the undertail coverts - more obvious when the bird cocks its tail in excitement. The bill is short and dark brown and the legs a strong brown flesh like colour. Juveniles are similar to the adult. There are a few surprises concerning the Cettis too - most passerines have twelve tail feathers, but the Cettis only has ten, they lay red eggs, males are polygamous, mating with two to four females, and they take little part in rearing the young. However, that amazing song is their most striking feature - 2.5 - 5 seconds long consisting of a che-che-weechoo-weechoo-wechoo-wee. You won’t mistake it for anything else. 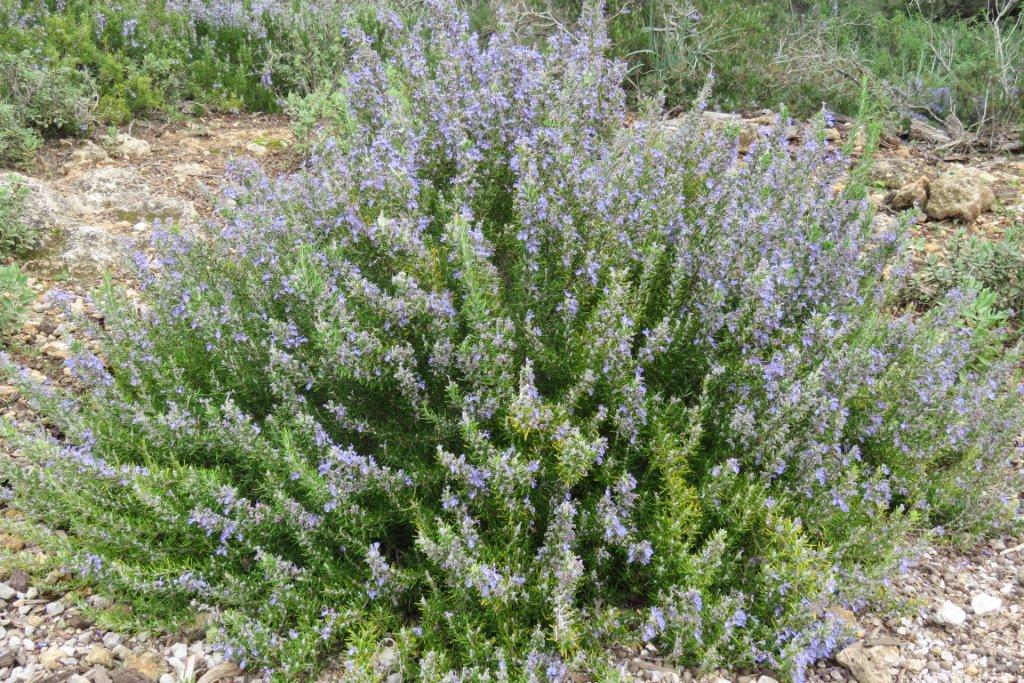 Now, spring has already sprung, and butterflies are on the wing, and coupled with this, the landscape is slowly changing as more and more plants reveal their beautiful colours. One such plant I always like seeing, not just for the blue flowers that can cover it all over, but that distinctive herb smell as you touch it - I am of course referring to the Rosemary (Rosemarinus officinalis). Garigue and maquis habitats are the favoured location for this species, and the leaves can be used in many ways in cooking, and also serve as an appetite stimulator and digestive remedy. This evergreen, strongly aromatic shrub is stalkless, with narrow linear, leathery leaves, with the edges in-rolled beneath. The flowers can be a pale-blue to dark-blue, and less often a white colour. They can flower at almost any time of the year. 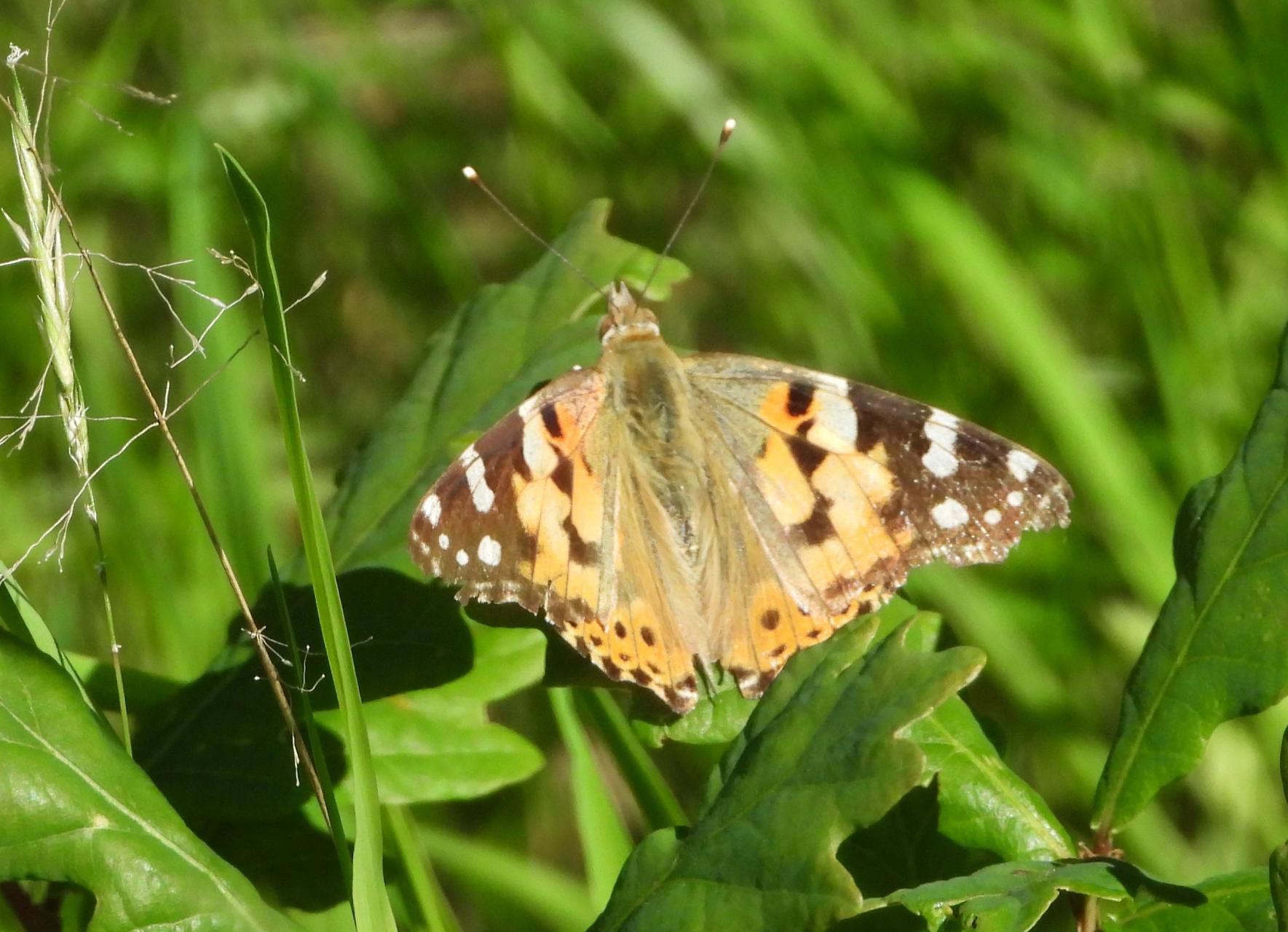 I always like having to walk the narrow path amongst the rocks to Alburcutx Tower, as I have to brush past the Rosemary, which gives off that gorgeous smell, and of course try to avoid the rougher Dwarf Palm, Rock Rose and Cistus bushes along the way. But time spent observing Rosemary can be well spent, as this plant attracts butterflies in abundance, with one species in particular always worth looking out for - the migrant Painted Lady (Cynthia cardui). Migrating from North Africa, they are a powerful flyer, and when on migration, they can reach speeds of 8 - 10mph, which is quite fast for a butterfly. Once they reach the areas they settle in, they slow down and spend a lot more time around their food plants, and can often be seen sunning themselves on rocks and on the ground.

The white marks on the black tips of the forewings distinguish them from the Small Tortoiseshell butterfly, besides, the Painted Lady is a large butterfly with slightly pointed wings. The wingspan is 57mm. They have a visual system that resembles that of the Honey Bee, with cardui eyes containing ultraviolet, blue, and green photoreceptors. Unlike other butterflies (such as the Monarch), they lack red receptors which means they are not sensitive to red light. Their main defence mechanism against Spiders, Wasps, Ants and birds, is for the caterpillar’s to hide in small, silk nests on the tops of leaves. Plants regularly visited include Thistles, Sunflowers and Artemisia, but at least 300 host plants are known to be used. Keep a look out for this beautifully marked butterfly from late April to early May.