Fiestas and religious festivals have traditionally been associated with an assortment of pastries, sweets, cakes and biscuits. Some are flavoured with almonds’ pine nuts, honey, cinnamon, and orange blossom water reflecting their Arab, Moorish roots, while others are doughnut style pastries fried in oil such as roscos, buñuelos and the extremely popular churros, which are served with hot chocolate for dunking.

Although the giving of chocolate Easter eggs is more popular today that it ever has been in Spain, it took them a long time to really become popular. That said, of all the symbols associated with Easter the egg, the symbol of fertility and new life, is the most identifiable. The customs and traditions of using eggs have been associated with Easter for centuries. Originally Easter eggs were painted with bright colours to represent the sunlight of spring and were used in Easter-egg rolling contests or given as gifts. After they were coloured and etched with various designs the eggs were exchanged by lovers and romantic admirers, much the same as valentines. In medieval time eggs were traditionally given at Easter to the servants.

One Typical Spanish dish using eggs at easter is “Hornazo”, a traditional egg and meat pie. Years ago, eggs were looked at as a ’sort of meat’ since they came from chickens and were not allowed to be eaten during Lent. Unfortunately, the chickens didn’t quite understand this and carried on producing eggs everyday. So to preserve them, they were hard boiled and used in hornazo. These days, there is even a sweet version of hornazo made with almonds and during the easter celebrations, they are often baked with a pastry cross on the top.

Among the other specialities to look out for when travelling through Spain during “Pascuas” include sweet dishes such as “Rosquillas de Semana Santa” along with traditional fried pastries called “Rubiols”, “Pestiños”, flavoured with anise and sweet wine and savoury “empanadas”, a type of pasty or pie filled with lamb and vegetables. The Balearic Islands serve a typical cream cheese tart called “Greixonera de brosat”. Greixonera or cazuela de barro is the name given to the round deep-sided clay or earthenware cooking pot that the tart is cooked in. They hold the heat for a long time and, although they can be used over a direct flame, are also excellent for oven cookery.

1 Grease well an earthenware dish or a cake tin with the butter.
2 Separate the eggs and whisk together the egg yolks and sugar. Add the orange juice, cinnamon, grated zest and cream cheese and mix well.
3 In a large bowl, whisk the egg whites until stiff and they form stiff peaks. Fold the egg whites into the egg yolk and cream cheese.
4 Pour the mixture into the buttered dish or cake tin and bake in a moderate oven (175ºc/350ºf/gas5) for 40-45 minutes.
5 To serve: Dust the “grexonera” with icing sugar, slice into large wedges and serve with a scoop of vanilla ice cream.. 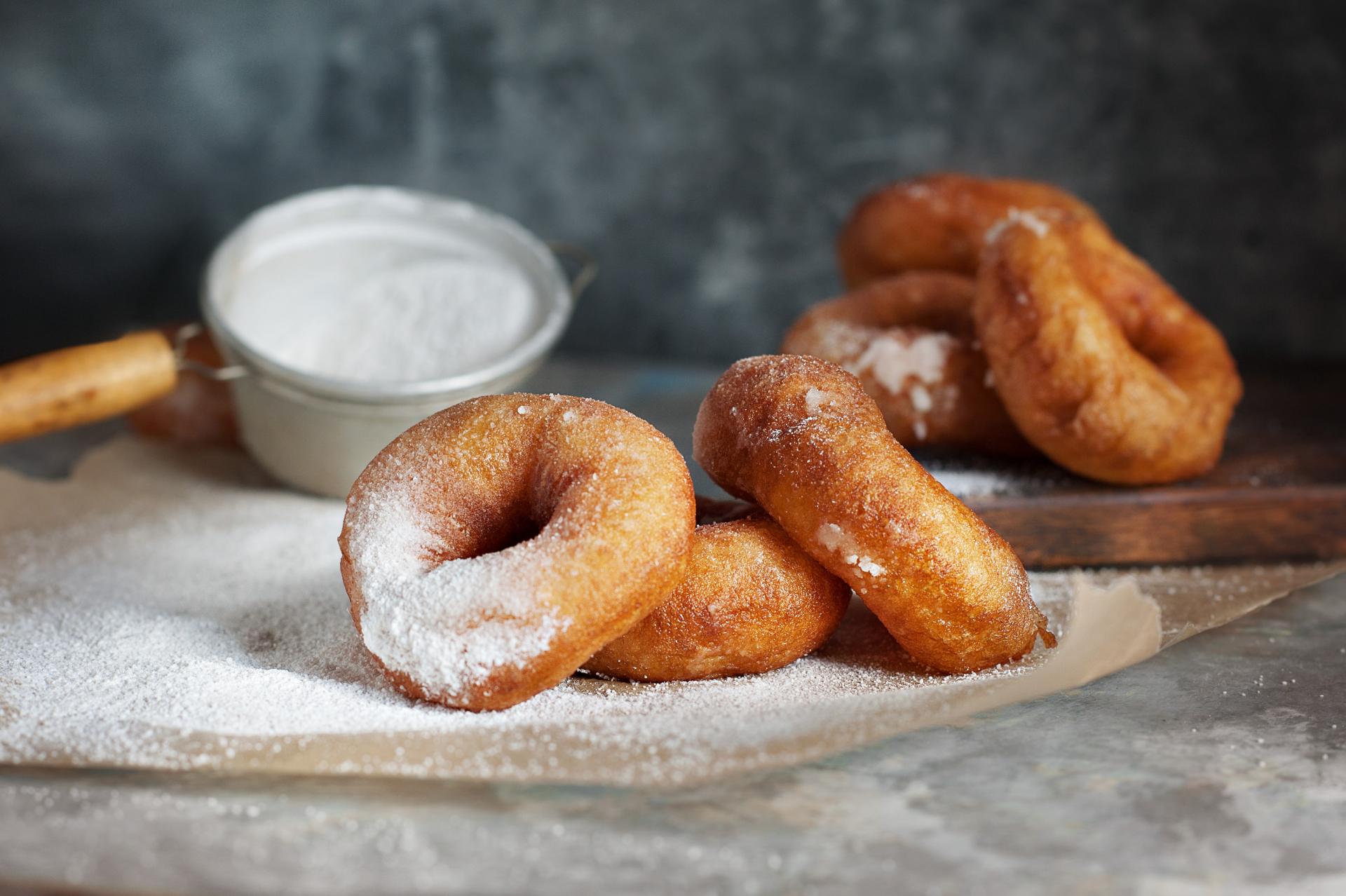 1 Separate the eggs and beat the egg yolks and sugar until light and fluffy, then add the lemon zest. Beat the egg whites until thick and add to the eggs and sugar.
2 Mix carefully and add the baking powder & flour. Blend until the mixture is soft. Cover and leave to rest for one hour.
3 Heat oil in a pan and shape the mixture into small doughnuts (6 cm more or less) and fry until golden brown on both sides.
4 Remove from oil and sprinkle with sugar and cinnamon. 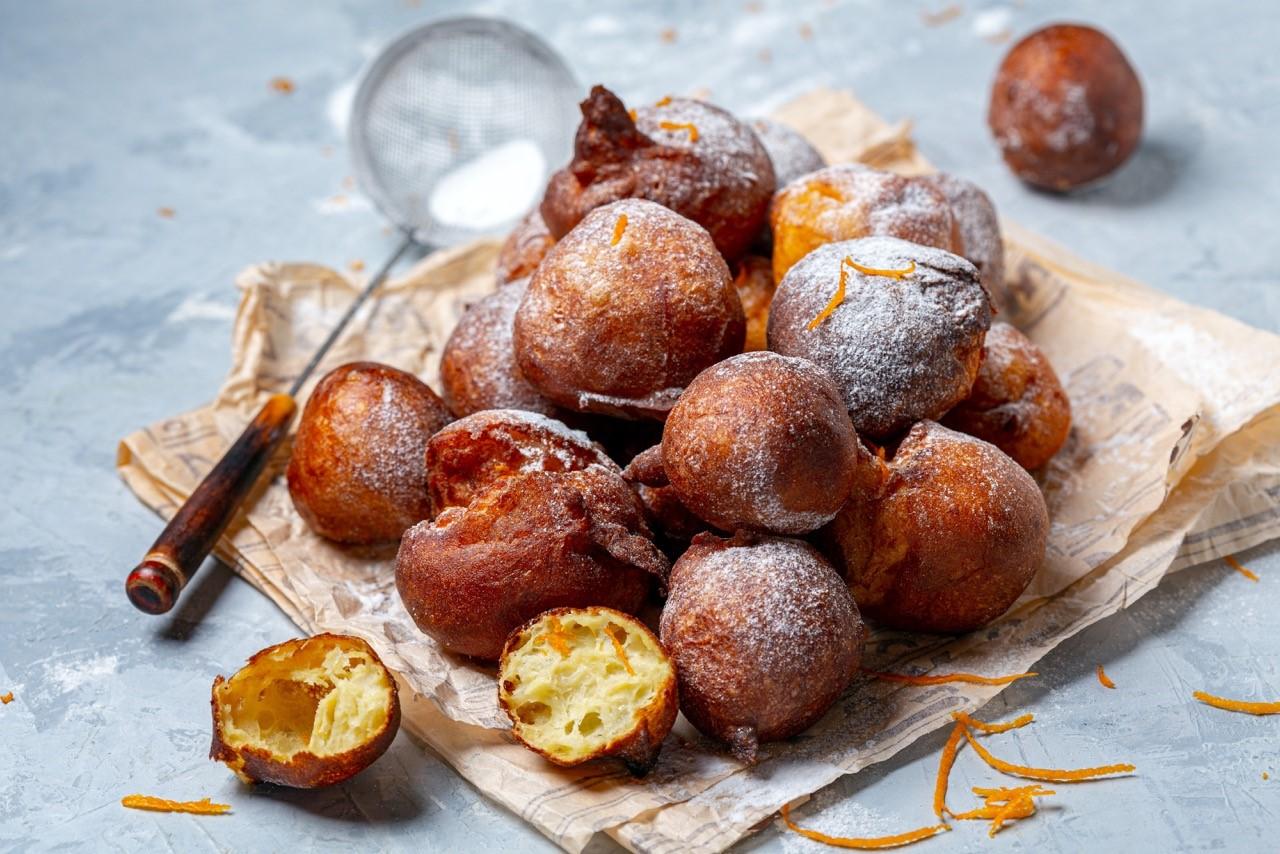 Sweet potato “bunuelos” with an apricot and vanilla sauce

1 To make the bunuelos: Carefully, peel the sweet potatoes and place them in a large bowl. 2 Work them to a puree with a wooden spoon and add the egg and egg yolks. Add the flour and sugar; beat well until the mixture forms a smooth dough.

To make the apricot and vanilla sauce: Place all the ingredients over a gentle flame and simmer for 20 minutes. Pass through a fine sieve and refrigerate until required. Heat enough oil to cover the bunuelos. Using two spoons dipped in hot water, form balls of dough and drop them carefully into the hot oil. Cook until golden brown, remove and drain them on absorbent paper. Sprinkle with a little caster sugar and serve warm with the chilled apricot and vanilla sauce.

*The sweet potatoes are best cooked the day before to allow them to dry out a little over night.