Mallorca is actually cheaper than it was in 2019!

Do you agree? Email us your comments.

As families prepare to head off to European hotspots in the school holidays, Post Office Travel Money’s annual Family Holiday Report reveals that resorts in Bulgaria and Turkey are likely to be cheaper for British bargain hunters than those in the Eurozone. 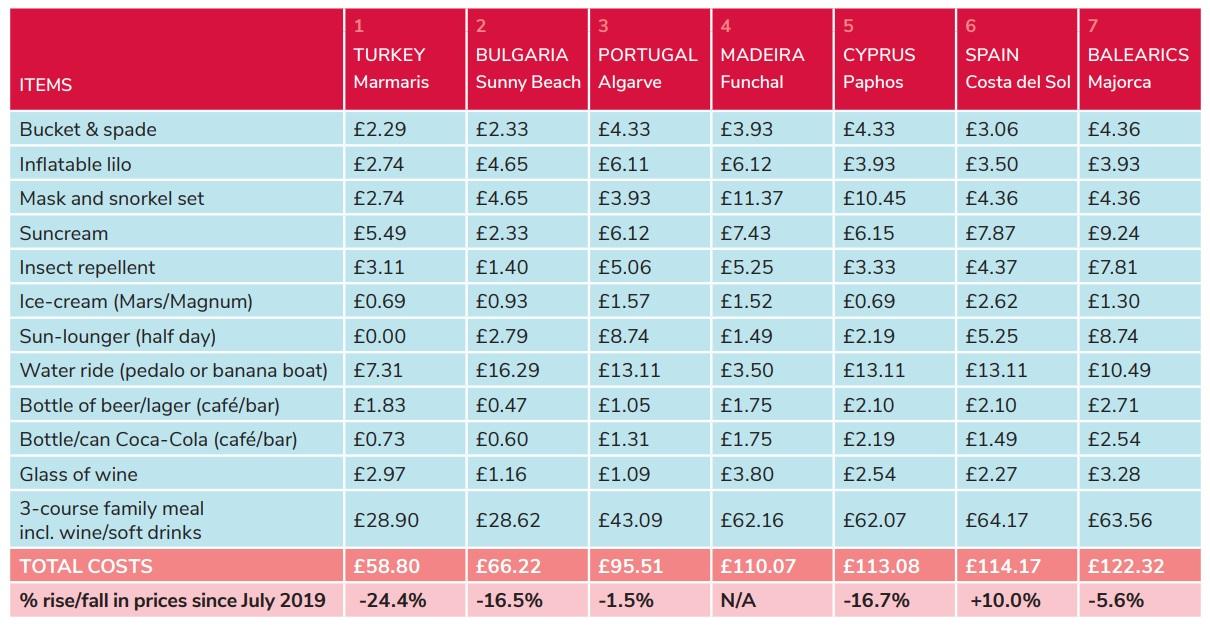 The report’s Beach Barometer, produced for the first time in partnership with TUI, compared costs in 16 European destinations and found that prices have risen in three-quarters of them since the pre-Covid-19 summer of 2019. This was due to a combination of higher resort charges for meals and drinks and sterling’s fall in value.

Sunny Beach, Bulgaria and Marmaris, Turkey emerge as neck and neck at around £86 for the Beach Barometer of 12 items, including a family meal, drinks, suncream, insect repellent and beach items ranging from buckets & spades and lilos to ice-creams and pedalo rides.

Local prices have doubled in Marmaris compared with 2019 but the collapse of the Turkish lira since then has helped to reduce the impact. Costs provided by TUI resort reps and Marmaris Info, converted into sterling by Post Office Travel Money show that Britons can expect to pay almost 11 per cent more than three years ago. But Sunny Beach’s smaller eight per cent price rise helped the resort nudge ahead of Marmaris.

Despite these price rises, resort costs in Sunny Beach and Marmaris were over 20 per cent lower than in the cheapest Eurozone resort, Portugal’s Algarve (£108), and around half the price of the two most expensive destinations. The barometer basket in Puglia, Italy weighed in at just below £186, while Ibiza was the highest-priced in the survey at over £186. However, prices have fallen in both destinations - by 4.9 per cent in Ibiza and 5.2 per cent in Puglia.

Along with Mallorca (£139, 3.3 per cent down on 2019), Ibiza and Puglia were the only destinations to show price falls. Instead, this year’s barometer revealed increases in nine of the 12 resorts where prices were also collected in 2019.

Nick Boden, Head of Post Office Travel Money, which accounts for one-in-four UK foreign exchange transactions, said: “Sterling’s recent fall against European currencies and ongoing uncertainty about how it will perform in the coming weeks means that keeping a tight rein on resort spending will be crucial for families this summer to avoid busting the holiday budget.

“We found big price variations in the 16 destinations surveyed, particularly across 13 Eurozone resorts. This makes it doubly important for holidaymakers to do their homework and budget carefully to cover costs in the holiday resort they are visiting. We also found that prices can vary dramatically between resorts in the same country. In Greece, for example, barometer costs were 17 per cent lower in Corfu than in Crete.”

In common with the four resorts – Corfu (£134), Kos (£140), Rhodes (£143) and Crete (£162) - researched by TUI representatives in Greece, an additional four were surveyed in Spain and all eight underline the wide differences in prices within these two countries.

Consumer research conducted for the Family Holiday Report found that almost three-in-five (59 per cent) families are planning trips abroad this year but over three-quarters (76 per cent) of them bust their budget by almost 38 per cent on their last holiday, spending £243 extra on the average budget of £644 they had set.

Food and drink is the key reason. Over 90 per cent said they spent an average of £282 on eating out, buying drinks in bars and restaurants and shop-bought food and drinks.

Pester power is another explanation for the high levels of overspending. Parents admitted that pressure from kids set them back an average of £161. 86 per cent of parent splashed out an average of £35 on ice creams while other budget busters were water or theme park visits (£50), pedalo rides (£29) and beach gear like buckets and spades, swimming masks and snorkels and lilos (£47).

Post Office Travel Money’s Nick Boden said: “The Beach Barometer reveals how paying for kids’ treats can tip the family holiday budget into the red. One way to keep costs down is to squeeze kids’ gear like jelly shoes, masks and snorkels and last year’s lilo into the suitcase – enough to pay for a pedalo ride or some ice creams.

“Another easy win is to buy currency before leaving home to avoid poor airport bureau rates. Change sufficient cash because using an ATM abroad will be expensive when bank charges are added. What’s more, changing over £500 in Post Office branches or online will bring a better rate.”

Commenting on destination demand, Richard Sofer, Commercial Director at TUI UK & Ireland, said: “Despite the rising cost of living, there are plenty of holidays that demonstrate good value for money for our customers for this year and beyond. We are seeing strong demand, especially for holidays in these more affordable destinations, with Turkey bookings up 60 per cent versus 2019 and the Algarve remaining a firm family favourite, with bookings up a third on 2019, indicating that budget-conscious Brits still want to enjoy an overseas trip.

“In addition, we’ve seen a trend towards customers booking our great value all-inclusive offerings in these destinations, which allows customers to budget more effectively when it comes to the total cost of their holiday, as they can work out what they have to spend in destination on any extra meals out, activities or items they might want to buy when they are away.”

There’s lies, damned lies and then statistics. In no way is it cheaper here than in 2019. Car hire, fuel, meals, drinks, supermarket food shopping, accommodation, electricity and God knows what else, are all up!