Despite autumn being upon us, there are still a few butterflies out and about, and lizards too. There are still some good pockets of sunshine to be had, so some species take advantage of this to fulfil their breeding and life cycles. There are several species of Lepidoptera that always catch my eye here, and each of them has their own characteristic way about them. So this week we are going to briefly look at the Swallowtail and the Painted Lady.

The Southern Blue
But first, La Gola has turned up trumps again, not only for its diversity of birds and orchids, but also for its butterflies. Cristina (the manager and ecologist) captured some lovely images this week of the bright Southern Blue. Male butterflies are bright blue, with thin dark margins and occasionally visible, small black spots on the hindwings, with a series of small dots on all wings. One of them is in the forewings discal area, and another breaks the arch and gets closer to the outer part on the hindwings. Female butterflies are similar, but their dots are larger and the background colour is light brown. Both sexes have a series of rounded orange spots and dots over them on the outer margins. They are a vibrant blue and they are a very active butterfly. 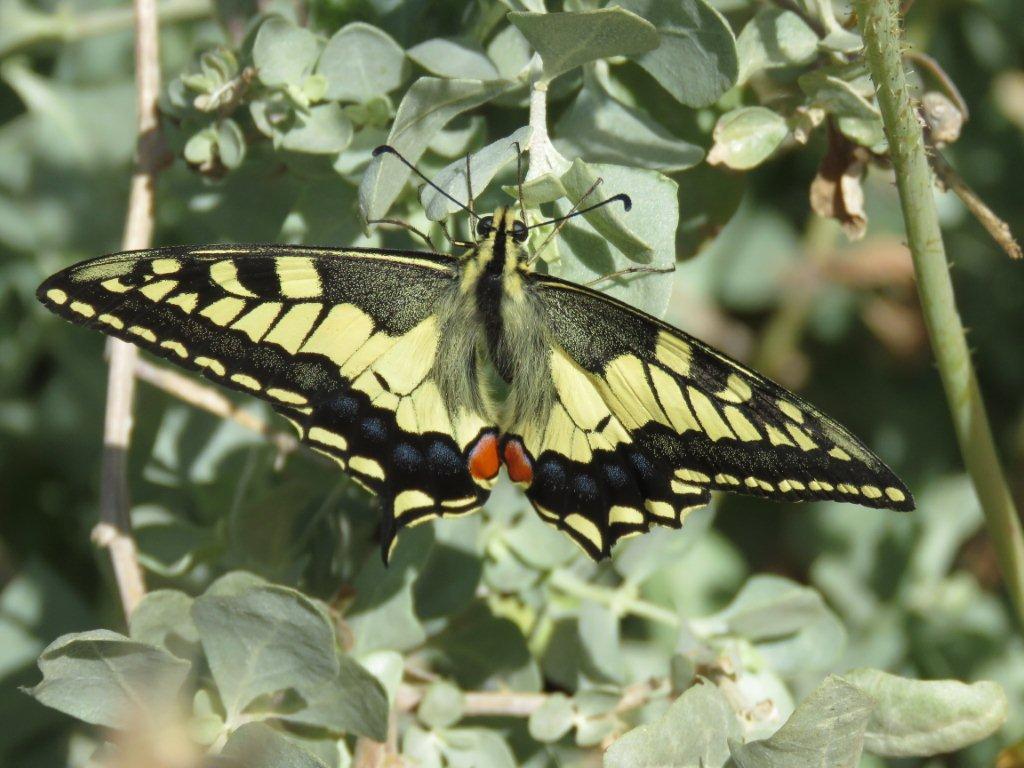 I remember seeing my first ever Swallowtail one warm morning on the track leading down to the first lagoon at the salt pans (Sallinas de Llevante). I knew straight away what species it was, but I never imagined for a moment I would be looking right at one. I was mesmerised by the bold blue on the outer edging of the lower wings, and the two large red dots in the centre, but most of all by the little tail streamers which gives this species its name. Swallowtail butterflies are large, colourful butterflies in the family Papilionidae, and include over 550 species. Though the majority are tropical, members of the family inhabit every continent except Antarctica. The forked appearance of the swallowtails’ hindwings, (which can be seen when the butterfly is resting with its wings spread), gave rise to the common name Swallowtail. For me, one of my favourite butterflies has to be the Painted Lady. Butterflies are extraordinary little things, not just because of their shapes and vibrant colours, but some in particular make some incredible journeys to get here, and when you consider they are such delicate things, it makes them even more remarkable and impressive. Painted Lady’s arrive in May and June where they have migrated from south-west Europe and North Africa - a distance of more than 600 miles (1,000km). Now that in anyone’s book is an impressive feat of flying. Some years they can be scarce and yet in other years they can be seen in vast numbers. They are however a powerful flyer and reach speeds of around 8 or 10 mph which doesn’t sound a lot in the scheme of things – but for a tiny butterfly that is impressive. 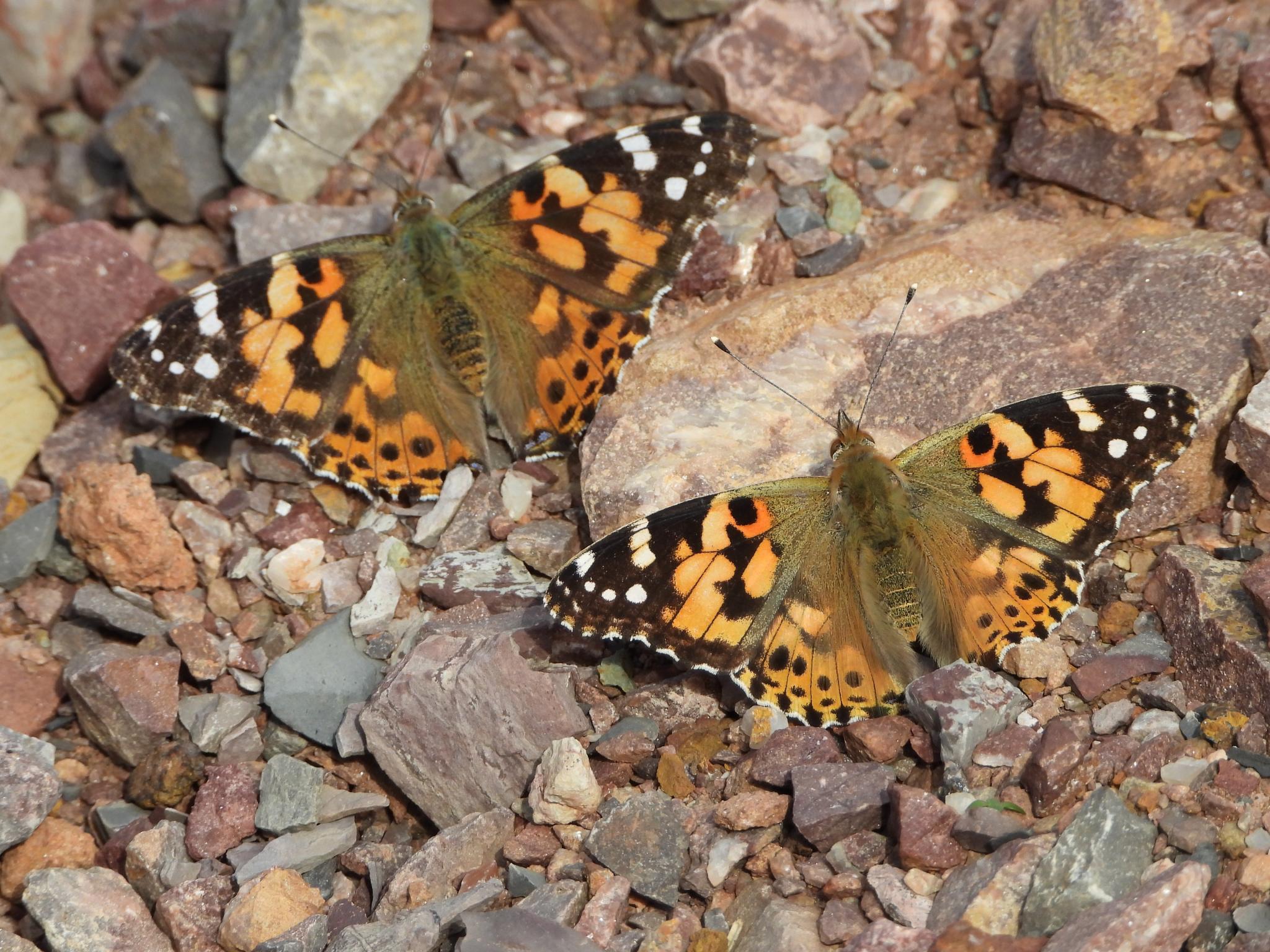 A lot of butterfly species have large ‘false eyes’ on their wings (picture the Red Admiral or the Peacock for example), which is a good defensive measure against predators wanting to try their luck eating them. It is the same for birds, the majority of them leave the butterflies alone, partly because the taste is not the best and partly as many have coarse hairs. Only a few species will readily take to eating a butterfly, including the summer breeding Cuckoo (which has a strong stomach lining) and the Spotted Flycatcher. But there is one opportunist on Majorca that will happily take the odd butterfly, especially if there are young to feed, and this is my chosen bird of the week – the resident Sardinian Warbler.

Found anywhere on the island, this bird is usually heard before it is seen. It has a characteristic harsh ‘treek treek’ call given from within the thick cover of vegetation. Adult males have a black hood which extends well below the eyes to the ear coverts. There is a sharp divide between the cap and the pure white chin and upper throat. The steep forehead shows off the vibrant red eye and eye ring. The remainder of the upperparts are grey with the underparts an off-white. The bill is a buffish-brown with a black tip and the legs are reddish. The wings are blackish with the feathers edged grey. The long tail is black with white edging. The female has the same pattern on the head as the male but the black is replaced by a dusky-grey.

The length is 13.5cm with a wingspan of 15-18cm and a weight of 11-14g. Food consists mainly of insects with fruit also in the autumn and winter. They breed throughout much of the Mediterranean basin from the coast to well inland, and even at quite an altitude (this male I photographed on a high peak at Alaro for example). In the breeding season, the nest will be low down, forming a cup shaped nest of grass, plant down and cobwebs, where 3-4 whitish tinged eggs are laid.

They will spend the majority of their time in thick cover, but will appear frequently in the open. The male is a quarrelsome bird, readily chasing off other males from its territory. For me, I love hearing their distinctive call even if I can’t actually see them, and I love seeing the bright red piercing eye. They are certainly worthy of being bird of the week on Majorca.