London and Majorca in Boccaccio's Decameron

Giovanni Boccaccio wrote the "Decameron" between 1349 and 1353, or so it is believed. A set of short stories about social life in the fourteenth century, the book's title means ten days in Greek. The stories were written against the background of the Black Death. Florence was ravaged by the plague, so ten young people (seven women and three men) flee the city to a villa in the countryside, where they entertain themselves by telling stories. 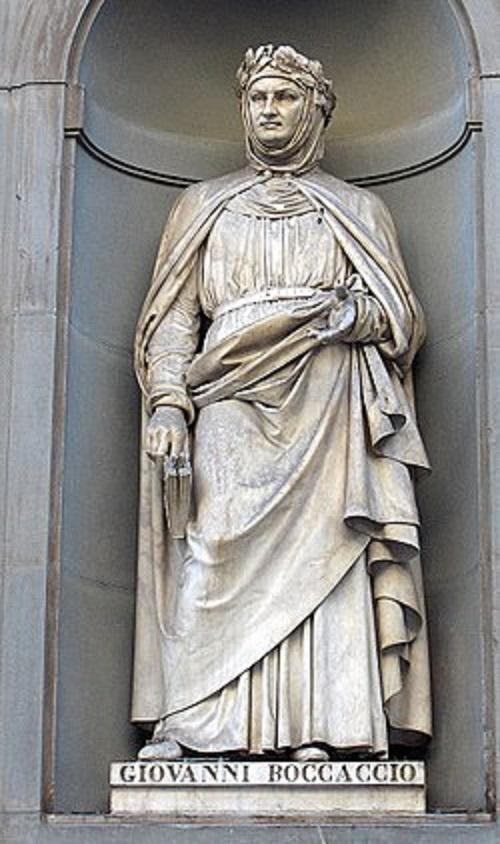 1845 statue of Boccaccio by Fantacchiott. Wikipedia.

These stories were mostly all set in Italy, but among other settings were London and Majorca; they tell, respectively, of an Alessandro and Alatiel, the Princess of Babylonia. In the first, three brothers from Florence are the beneficiaries of their wealthy father's inheritance. They squander this and fall into near poverty. Ashamed, they leave the city and don't stop travelling until they reach London, where they settle and, little by little, dedicate themselves to work to earn interest on the money they had left.

Having built up this capital and with pangs for Italy, they return to Florence, leaving a nephew - Alessandro - to manage the business and send them money. However, a long and terrible war breaks out, and Alessandro has to leave England urgently. He heads for the continent with other refugees, one of them a distinguished cleric, an abbot from one of the great monasteries in England, who was escorted by a retinue of friars who carried a great deal of luggage.

But this clergyman was not all he seemed. He was in fact a woman in disguise, with whom Alessandro had long conversations. Having stopped at an inn, where they are alone, they share a bed, making love on the condition that he marries her. Peace returns to the British Isles, and so do they. She is really the daughter of the king of England, who forgives her and arranges great festivities. He appoints his son-in-law as a knight and grants him the county of Cornwall.

No less exotic and adventurous is the tale of Princess Alatiel, daughter of Beminedab, the Sultan of Babylon, who arranged her marriage to his friend and ally, the King of the Algarve in Portugal. The sultan prepared a very well provisioned ship for Alatiel, who was very beautiful and was escorted by her trusted ladies as well as by some male guardians.

The ship set sail from Alexandria. There was a favourable wind, but after several days of good sailing there was a fierce and terrible storm. This lasted three days and pushed the ship towards the shores of Majorca. As the ship filled with water and was on the point of capsizing, the crew and passengers abandoned ship and tried to save themselves. Only Alatiel and some of her ladies-in-waiting managed to make it to land, when what was left of the ship ran aground a short distance from a beach.

The time passed and they, almost dead from exhaustion, were lying on the sand when a Christian knight named Pericó de Visalgo appeared. On horseback, he was heading for his castle, accompanied by a few servants. He rescued the princess. A banquet was held. They made love, he having got her drunk. His brother, Marato, was extremely envious that Pericó should have such a beautiful woman. He became infatuated with Alatiel and when a time came for him to sail from the port of Ciutat de Mallorca (Palma), he killed his brother and took the princess.

But Alatiel is kidnapped by various other men, one of them the Duke of Athens. Finally she is freed and in Famagusta (Cyprus) finds someone who knows her father and who takes her to the court of her fiancé, the King of the Algarve.