Apparently, the catamaran market is the fastest growing sector of the entire boating industry. Favoured by charter companies, competitive sailors and world-class sportsmen (Rafa Nadal just took delivery of a Sunreef 80 Power catamaran), these yachts have plenty to shout about.

A catamaran’s three key selling points are: space, safety and stability. The widely-separated twin hulls offer endless living accommodation (with the bonus of added privacy) and create a very stable platform to suit those who could be prone to a touch of seasickness. Cats also cope fantastically with heavy seas. It’s said that monohull owners often convert to multihulls, but multihull owners almost never switch back. 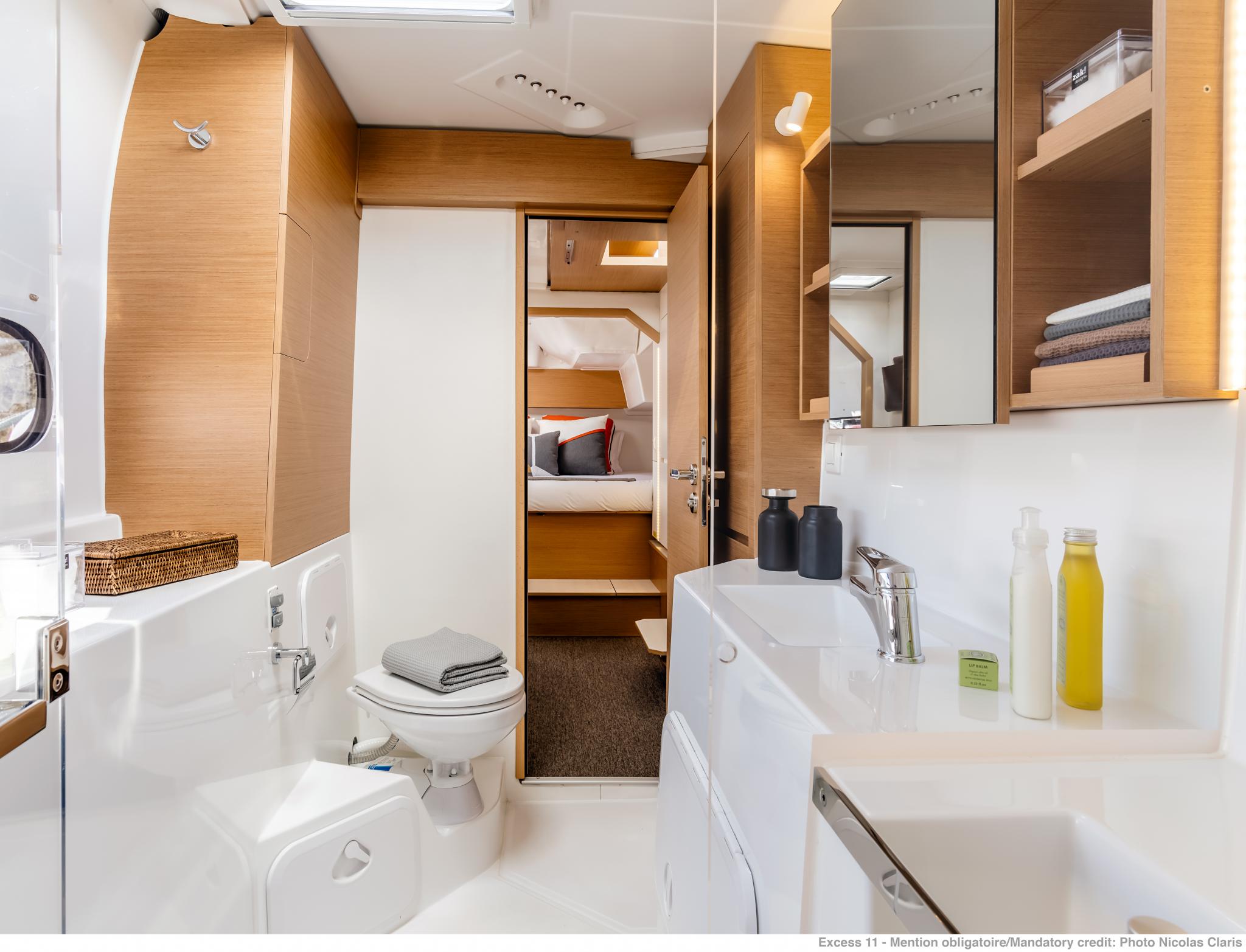 There are endless catamaran brands, but France dominates the sphere with household names such as BALI, Catana, CNB, Fountaine-Pajot, Lagoon, Nautitech and Privilège. Vendée-based Groupe Beneteau, the world’s biggest boat builder no less, is already responsible for the global market leader, Lagoon, and sister brand CNB, but spotted a gap in the sector for a youthful modern multihull and decided to fill it with Excess. 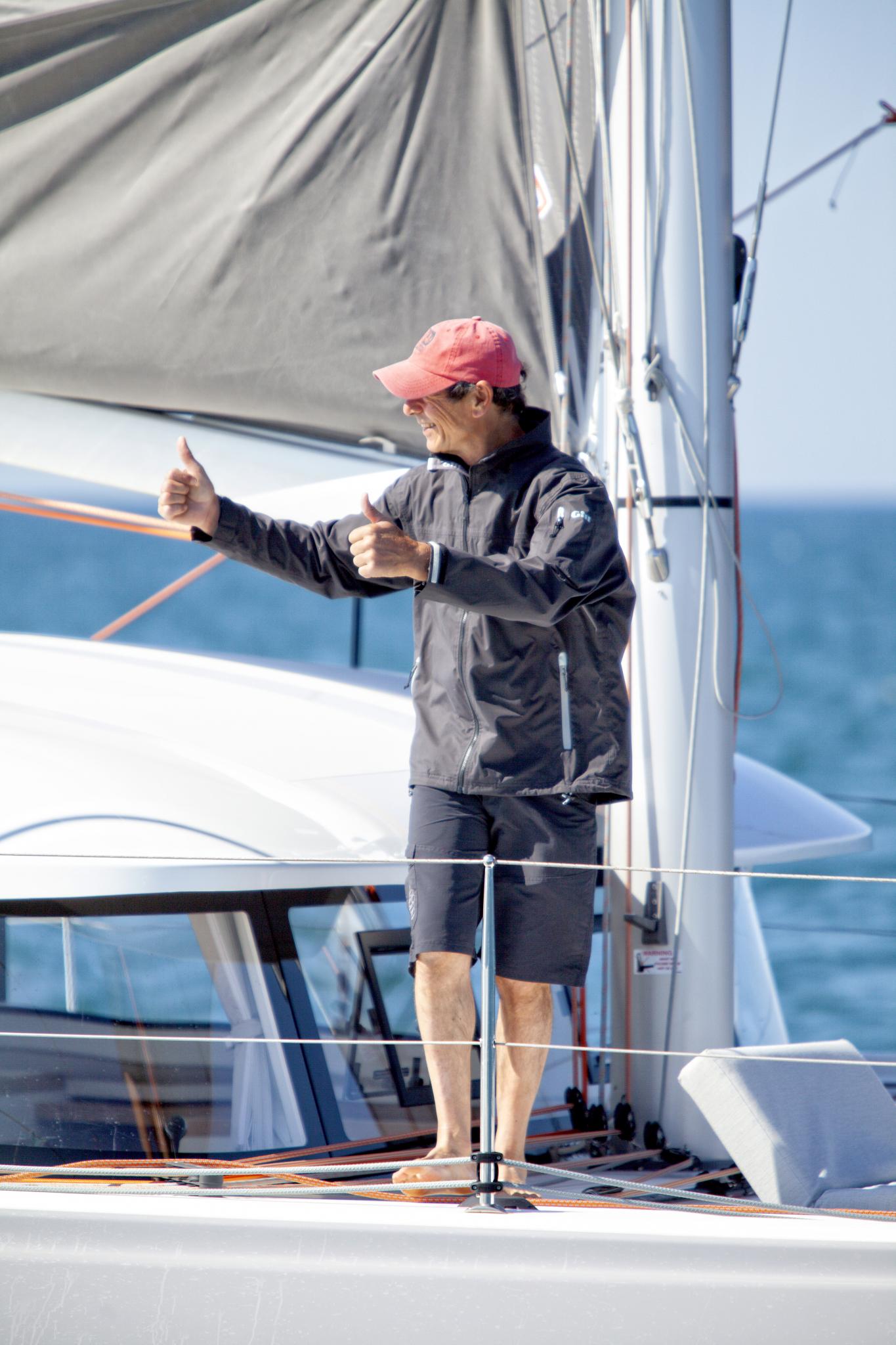 Founded way back in 1884, family-owned Groupe Beneteau has evolved over the years from fishing vessels to recreational boating and, bizarrely, also runs a housing division. It now has a stable of 12 boat brands - Beneteau, Jeanneau, Prestige, Monte Carlo Yachts, Four Winns, Glastron, Scarab, Wellcraft, Delphia, and the aforementioned CNB, Lagoon and Excess Catamarans - encompassing well over 200 models. The Group employs a mammoth 8,300-plus people across 27 production sites, and in 2018-19 posted revenues of 1.34 billion euros. It’s a true Godzilla of boating. 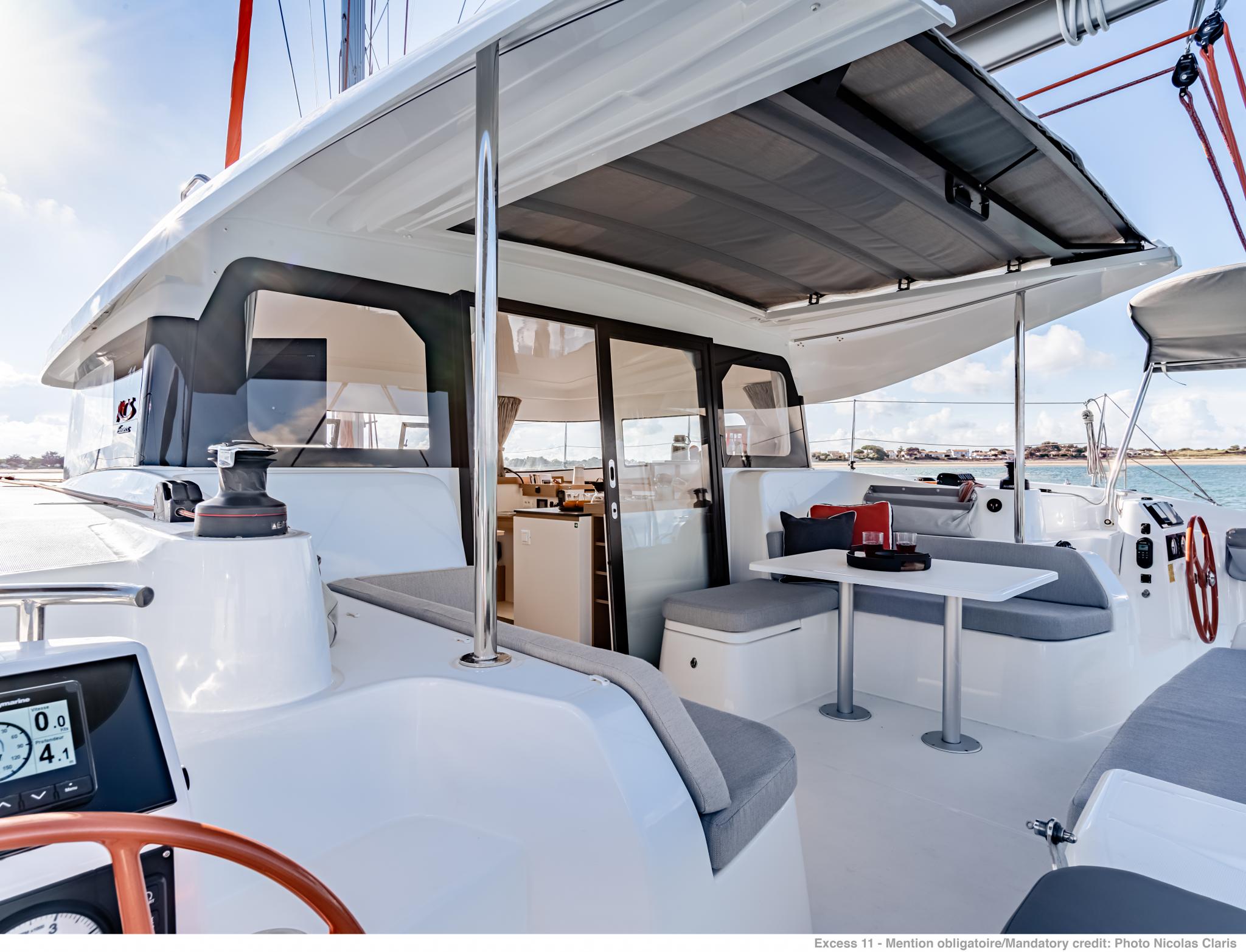 Groupe Beneteau launched new baby Excess Catamarans back in autumn 2019. Targeting a fresh generation of multihull sailors, the sporty Excess range sits somewhere in between the sedate bluewater cruiser and the flying machines of the racing world.

Product designer Bruno Belmont was responsible for putting together Excess’s identity. A naval architecture graduate from the University of Southampton (incidentally studying alongside Marc Van Peteghem and Vincent Lauriot Prévost of renowned French design studio VPLP), Bruno has a long-standing passion and talent for multihulls. Previously a designer for Lagoon, he was also curiously involved in the design and build of Kevin Costner’s racing trimaran for 1995 film Waterworld. Bruno even taught Kevin how to sail her. He’s now focussed on success for Excess. 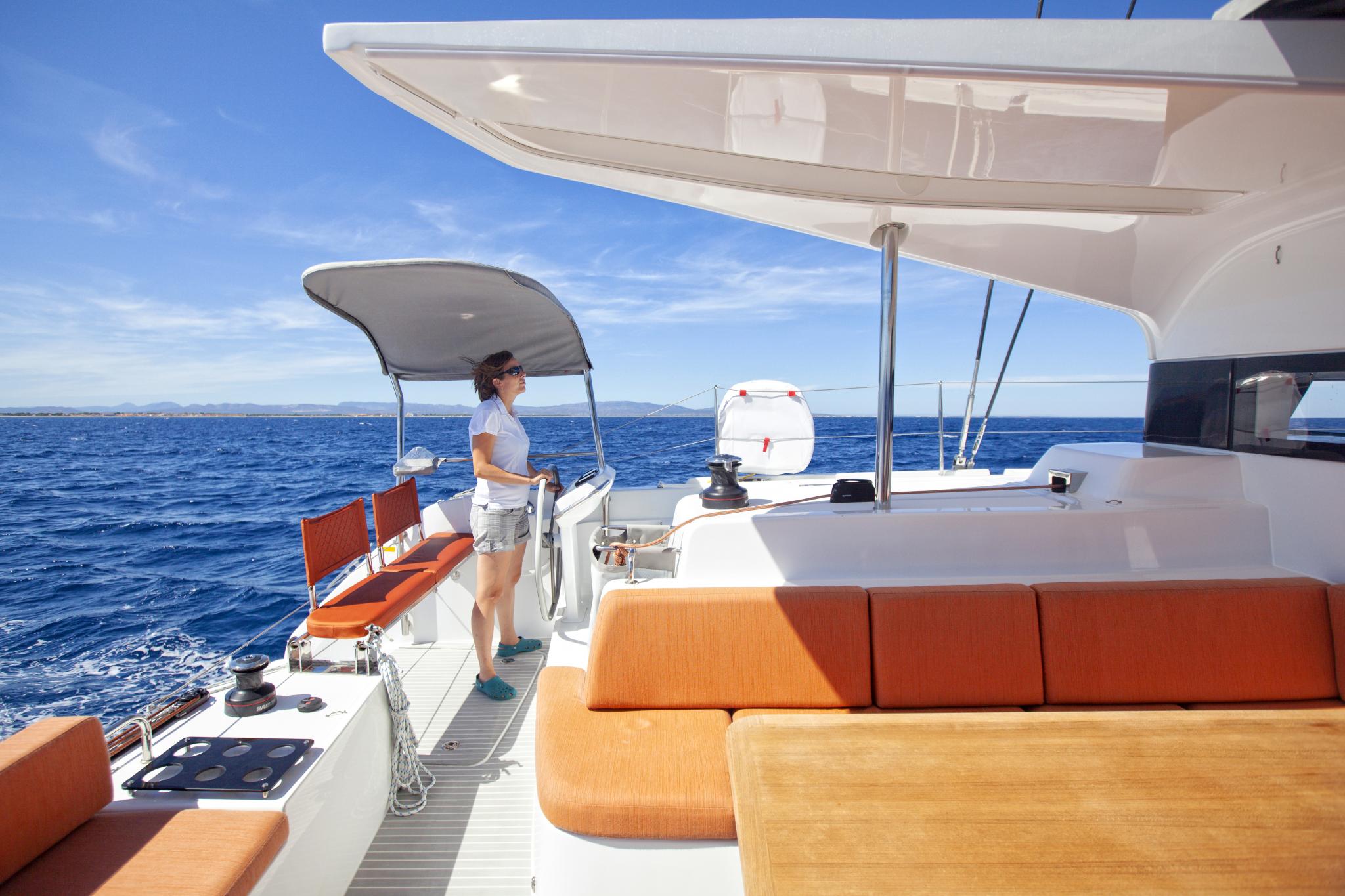 Bruno said: “The market is a broad spectrum with high-performance boats at one end and comfortable cruisers, which are optimised for charter use, at the other. About 90 per cent of the market – including our own very successful brand, Lagoon – is clustered tightly together at the comfort end of the spectrum. There are some well-established niche brands at the performance end, but there is a big gap in the centre.”

“We used to build about 1,200 sailing yachts each year; now it’s closer to 600. Effectively, 600 buyers are missing and we began to ask ourselves what had happened. There must be something changing in the way people sail.” 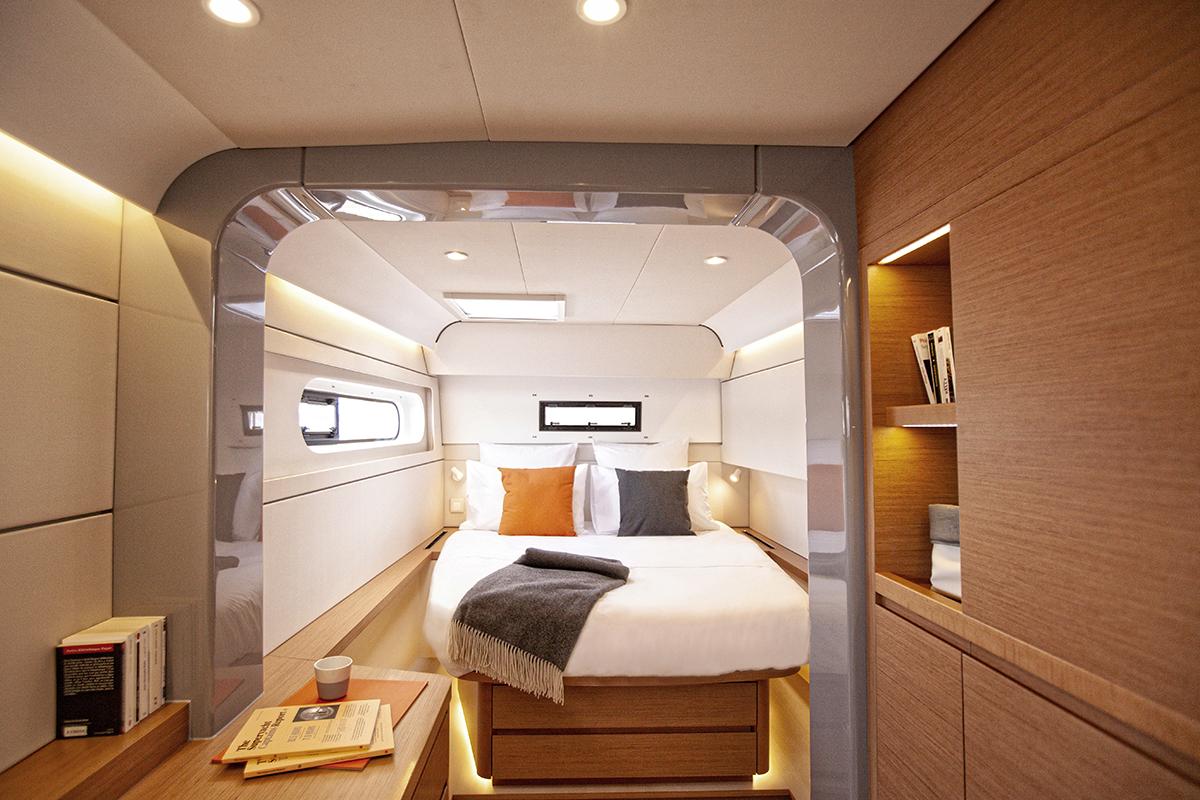 The two major changes that Bruno sees are, first, a tailing off in the popularity of monohulls and, second, a rise in the desire to charter rather than buy a boat.
But, if you’re an adventurous sailor, there is a problem with the boats on charter. Charter companies tend to offer big comfy family-friendly cruising cats and, while these are perfectly suited to the job, they’re not all that fun or satisfying to sail if you’re an experienced skipper. Yes, there are high-performance cats out there, the likes of Gunboat, HH and McConaghy, but they aren’t entirely appropriate for charter. The market was missing something that brought the two worlds closer together - enter Excess.

Using the tagline ‘be immoderate’, Excess hopes to deliver the same amount of satisfaction and engagement you get from sailing a finely-tuned monohull in the more practical shape of a catamaran. Designed for those who prefer outright ownership rather than charter, Excess is for proper sailors, people who enjoy the part between point A and point B, the long-distance fans and not the short-hoppers. 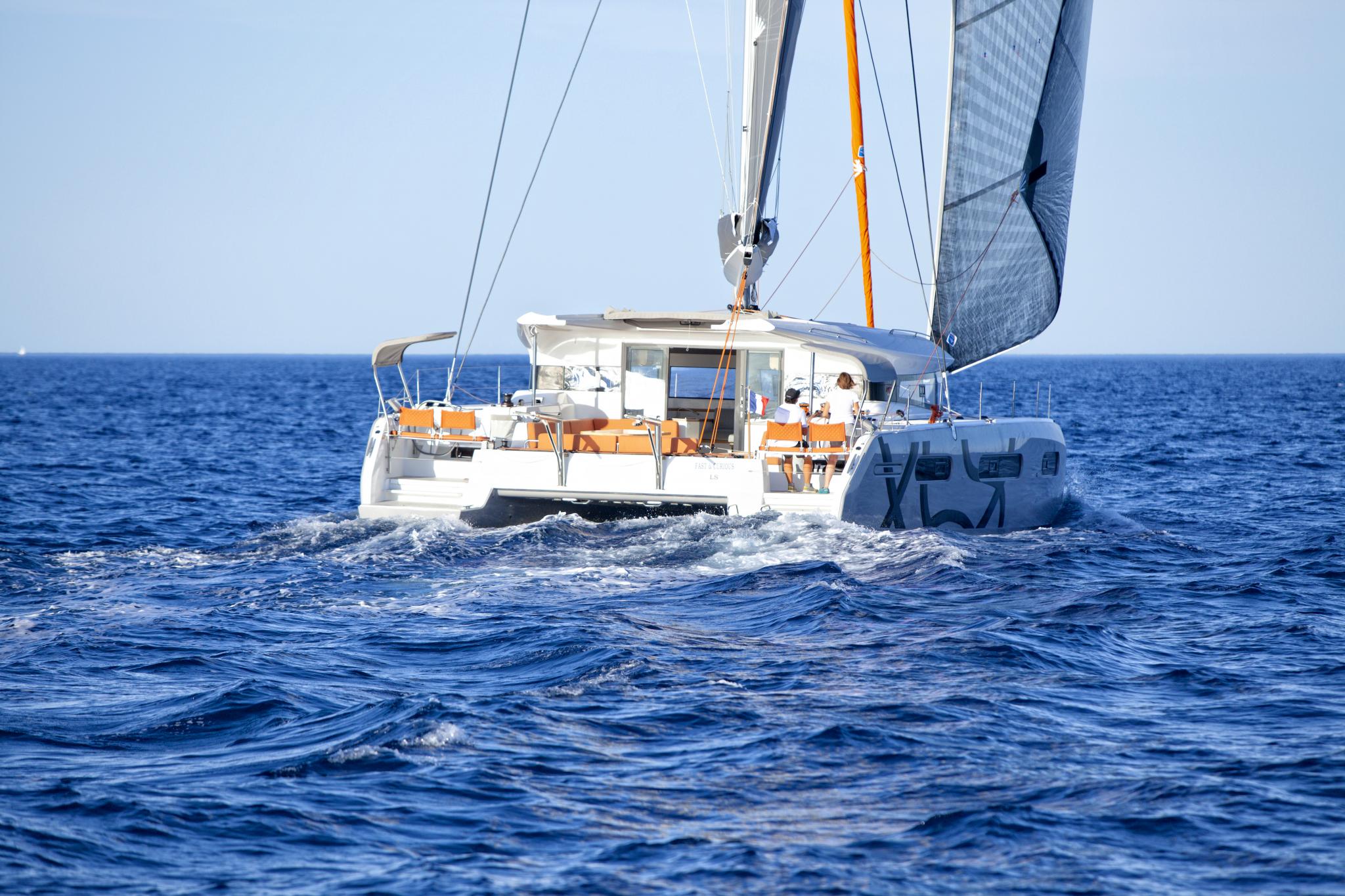 To this end, the Excess team has created a bigger sailplan than standard cruising catamarans, with a low boom and a higher aspect ratio - basically a tall, narrow sail creating less drag and more power. They’ve also positioned the mast further aft to allow for a self-tacking jib making for easier sailing - particularly if you’re short on crew. Additionally, in contrast to most production multihulls, the Excess is fitted with twin helm stations located aft and outside of the accommodation, racing style - the ideal position for skippers to keep an eye on the sails, the sea and the bows. Hardtops are fitted with untinted plexiglass to give an even better perspective on those sails, or a fully-retractable bimini if clients prefer.
Various interior layouts are on offer, with vastly pared-down integrated furniture for massive weight savings - although each cabin features a generous queen-size bed as standard. It all tallies up to Excess being on the sporty side of the cruising catamaran spectrum, without going as far as pure performance. Award-winning Vendée Globe sailor Marc Guillemot has been involved in the sea trials and is quietly impressed. 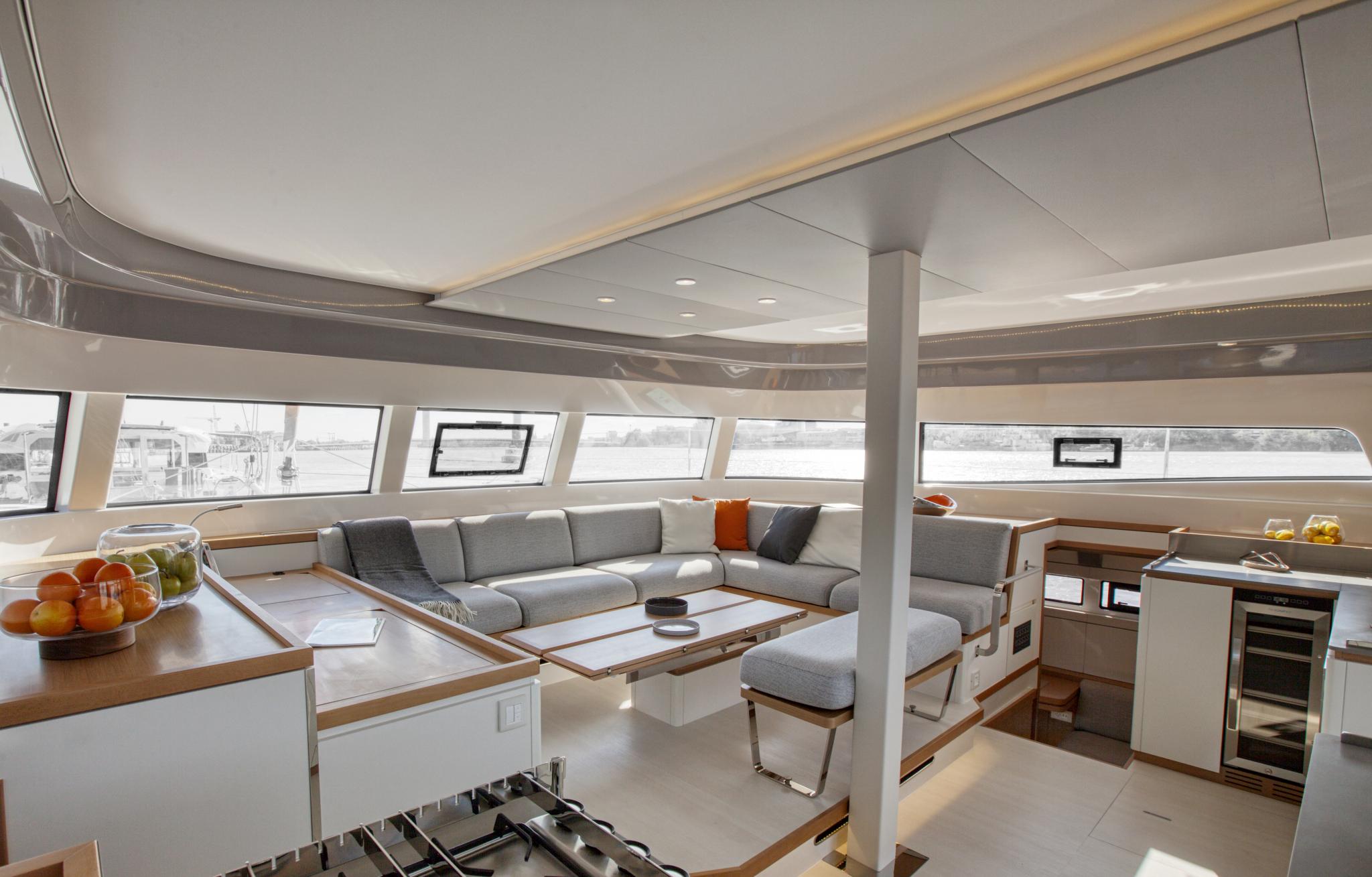