British modern classic yacht builder, Spirit Yachts, has had a pretty spectacular summer with the launch of two precedent-setting models: the Spirit P70 and the Spirit 111.

Its largest motoryacht to date, the 21.7-metre P70 marks a significant step forward for the company’s power range, while the eco-friendly 34-metre 111 is the largest single-masted wooden yacht to be built in the UK since Camper & Nicholsons’ Shamrock V launched in April 1930. Exciting times indeed. 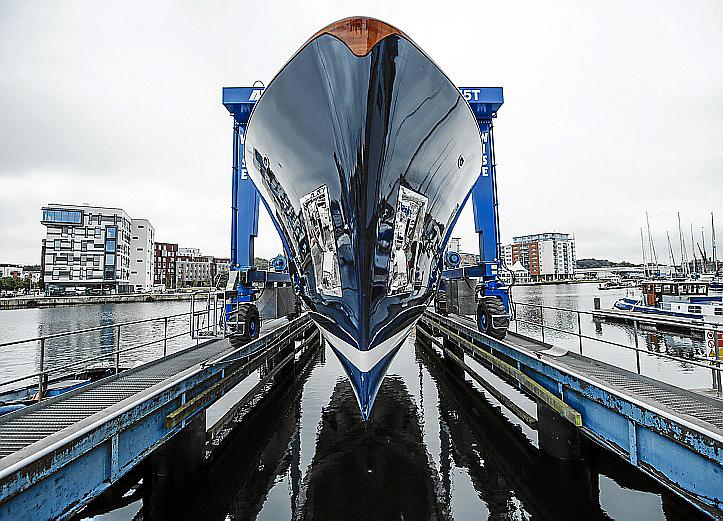 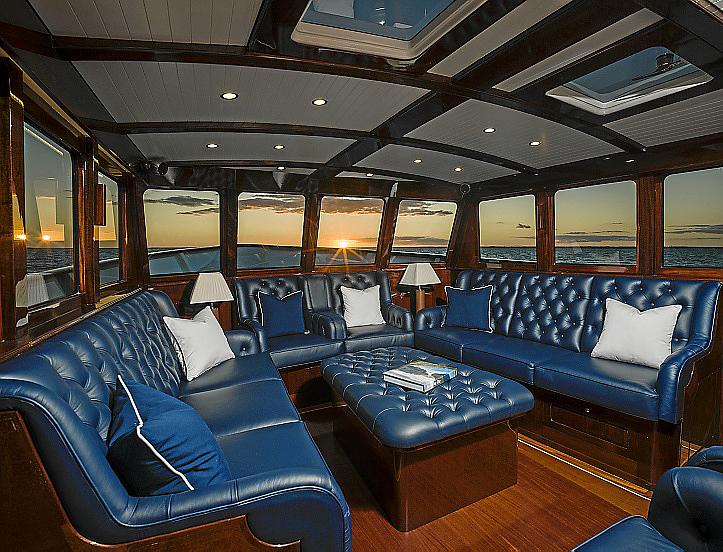 Spirit Yachts was founded by Sean McMillan in 1993, but his passion for handsome wooden boats stretches way back. After studying for a fine art degree, Sean spent a wild adventurous youth travelling round the world delivering yachts of all shapes and sizes. Once settled back in England, he started building classic-style boats under the name McMillan Yachts but, when recession hit in the early 90s, the bank withdrew funding and Sean lost both his business and his house.

In 1992, he was back on his feet and teamed up with partner Mick Newman to create a range of thoroughly contemporary yachts in terms of performance, but with all the elegance of the 1920s and 1930s. Mick had access to a derelict farm shed 25 miles north of Ipswich and together they set to work. 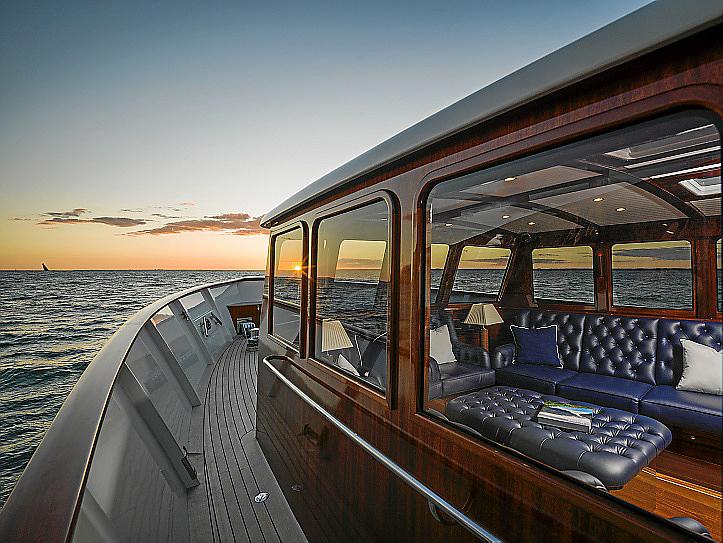 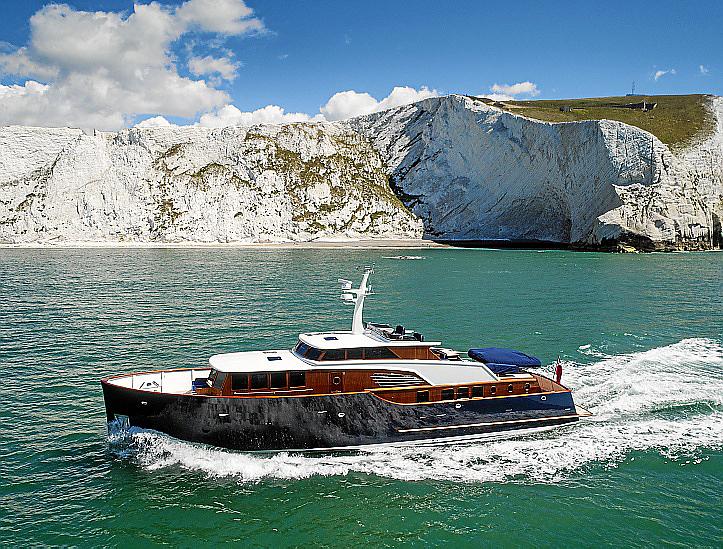 Wood always was, and still is, at the heart of every Spirit. It’s the only natural, sustainable boat-building material that offers beauty, durability and a favourable strength-to-weight ratio. It can be easily shaped and formed and moves with changes in heat and moisture without breaking. Wood withstands the elements and provides excellent sound and thermal insulation. It’s also very beautiful, and Spirit Yachts are designed to be just as beautiful in 100 years as they are today. And, unlike fibreglass, when it reaches the end of its life, a wooden boat can be dismantled and safely disposed of in any number of ways from firewood to sawdust.

The first Spirit yacht, the Spirit 37, was launched in 1993. Two were immediately sold and there followed a series of made-to-order boats crafted by the talented ‘two men in a shed’. Having completely outgrown their premises, in 2004 they moved to Spirit Yachts’ current location in Ipswich Haven Marina. This facility was almost doubled in size in 2016 in order to cope with demand.

Despite steady success, Spirit Yachts wasn’t widely known in the sailing world until two key tipping points. The first was in 2005, when Casino Royale’s producers got in touch with Sean asking for a British yacht that oozed class for Daniel Craig to slink into Venice on. The resultant custom-made 54-footer was the first sailing boat to navigate that particular section of the Grand Canal in 300 years. The second was 100-foot Gaia launched in 2007. Built in a lightwood epoxy and weighing less than 50 tonnes, she provided conclusive proof that it is possible to build a large fast performance cruiser entirely out of wood. Gaia is the reason we have the Spirit 111. 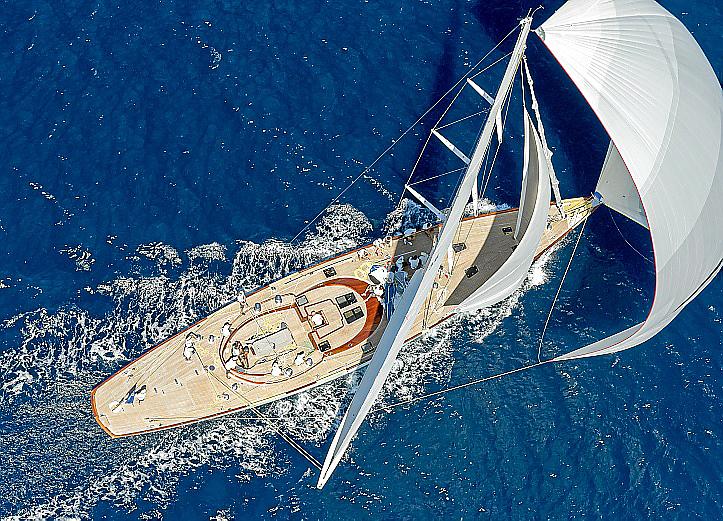 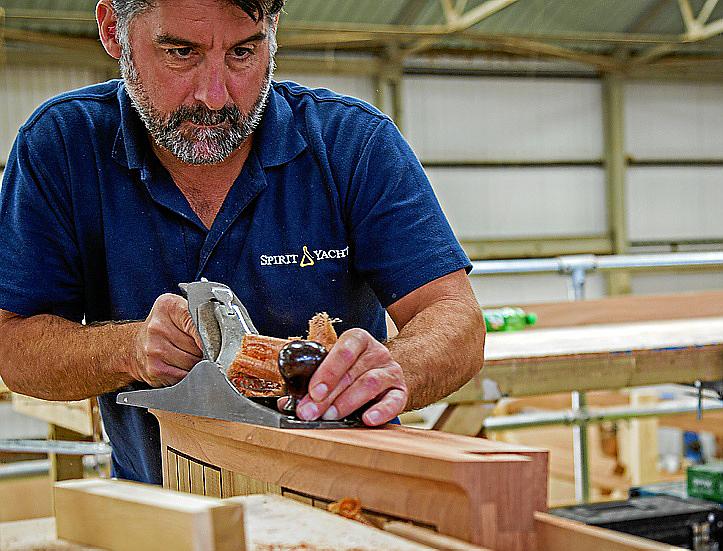 Billed as one of the most environmentally friendly sailing superyachts ever created, the Spirit 111 was handcrafted to a strict eco brief. A Torqeedo electric propulsion system using a 100kW motor is able to propel the yacht silently for up to 30nm at eight knots from battery power alone. The system will regenerate the four BMW lithium battery banks by rotating the propeller shaft whilst the yacht is under sail, allowing the yacht to operate for up to four days at anchor without having to plug into shore power or start the two onboard generators. Meanwhile, all power-consuming components have been carefully selected to use minimal energy without impacting performance or comfort. As long as there’s adequate wind, she could cross the Atlantic without consuming fossil fuels.

Nigel Stuart, MD of Spirit Yachts since 2014, said: “By partnering with suppliers and challenging ourselves to create customised solutions using the latest energy-saving technology, we have created one of the world’s most sustainable superyachts. From construction, using responsibly-sourced timber to carbon-saving systems whilst in operation, the Spirit 111 sets a new standard for reducing the impact sailing has on our environment.” 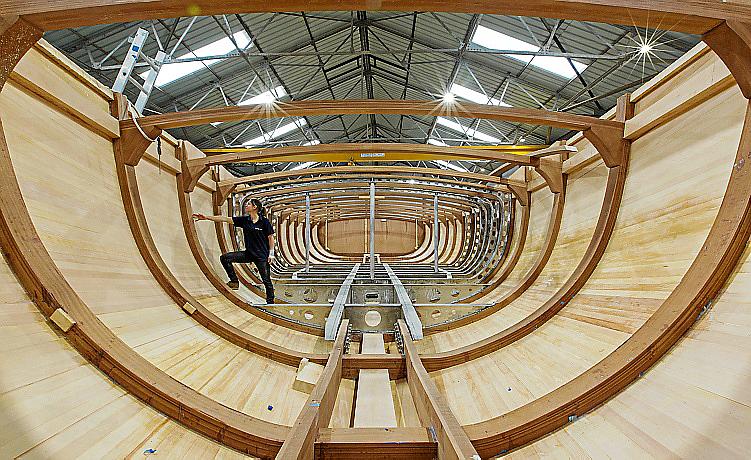 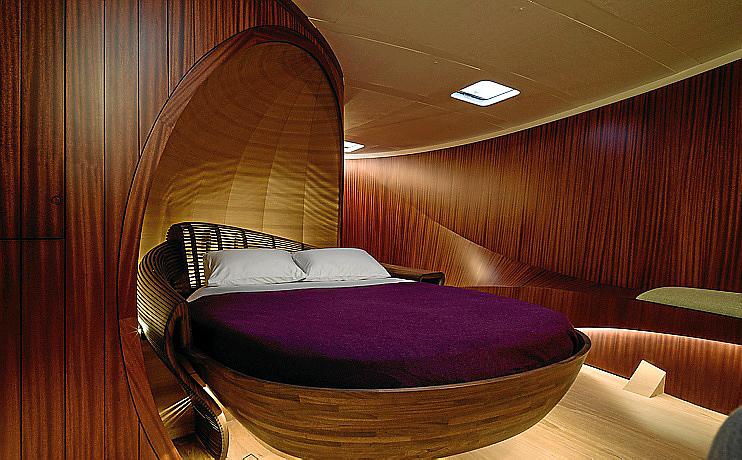 Remarkably, the Spirit 111 is one of a handful of superyachts capable of cruising without professional crew. Founder Sean McMillan commented: “A single-masted wooden yacht of this size that can be owner-driven is nothing less than a feat of engineering. The yacht’s impressive strength-to-weight ratio, a carbon rig and lightweight performance sails, will allow the owner to compete at regattas worldwide.”

The totally unique interior was created in partnership with Lymington-based Rhoades Young, and the design, according to Sean, “is a never-ending swirl of organic shapes, encompassing the practicalities necessary in a yacht but in a highly imaginative way”. Due to the fact that Spirit Yachts’ craftsmen can genuinely make absolutely anything in wood, the Rhoades Young imagination was allowed to run wild. 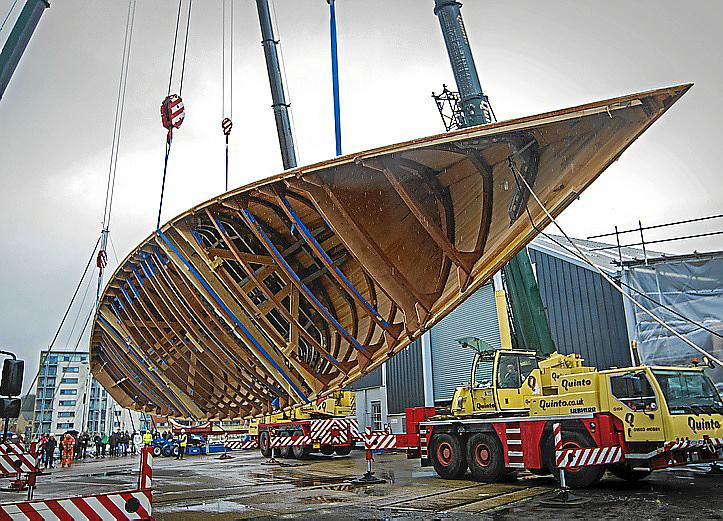 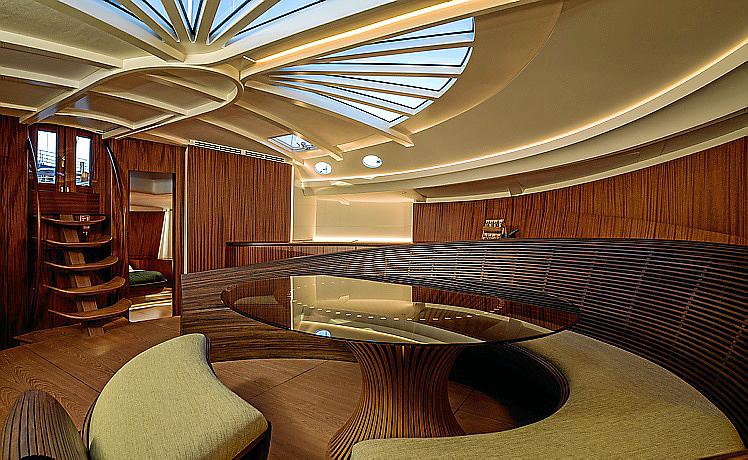 A final word should go to Spirit 111’s smart lighting system which is almost entirely motion-sensor activated, lighting up the relevant areas as guests move around.

Some may baulk at the thought of Spirit Yachts developing a motor collection, but the P70 is no normal motoryacht. Instead it’s an exquisitely-crafted wooden yacht that stays aesthetically true to the company’s timeless style and refined elegance. Designed with the owner’s tastes and itinerary in mind, the P70 is capable of cruising 1,000nm at an average of 18 knots across the North Sea without having to refuel and, at 24 tonnes (light), is almost half the weight of its fibreglass counterparts. 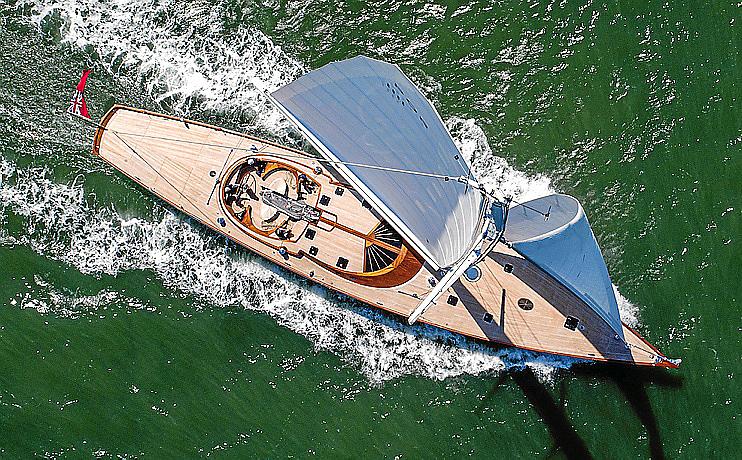 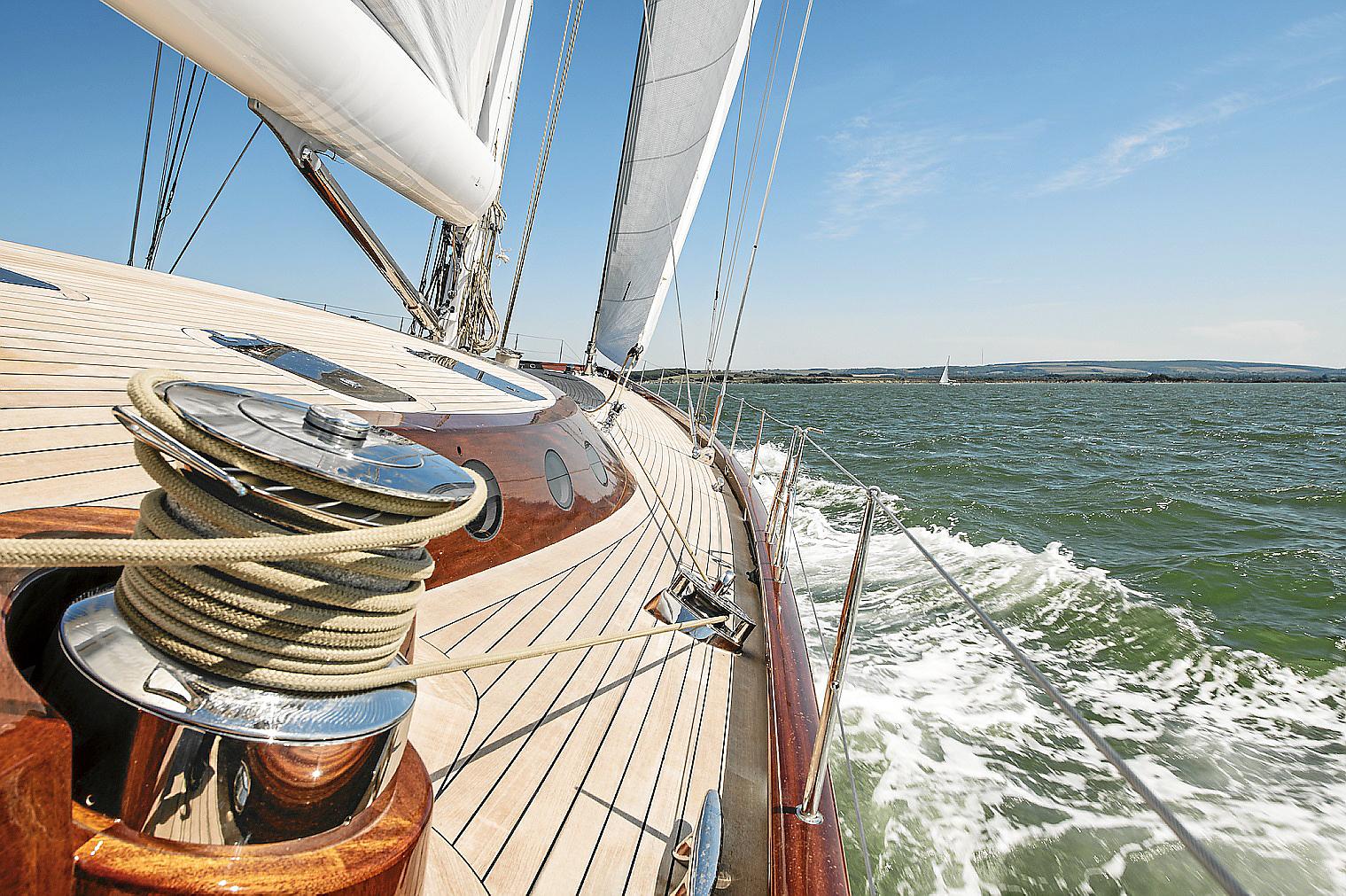 Nigel finishes, “The launch of the P70 represents a significant step forward for the Spirit Yachts’ power range. Whilst the company’s core business remains sailing yachts, we are seeing increasing demand for larger motor yachts tailored to suit an owner’s cruising plans. We are responding to that demand by investing in innovation and expertise devoted to delivering beautiful modern classic motor yachts that perform on the water.”