W e have a puppy. Gorgeous 12-year-old Edwin now has to put up with the horror of new housemate 14-week-old Barnes. Both are border terriers (no relation), but just one is a border terrorist (the small one).

Having cleared up the umpteenth carpet wee-wee and woken at 4am for the tenth day on the trot, I wondered, ‘why don’t more people throttle their newborns’? Turns out, we’re hardwired not to. Nobel Prize winner, Austrian Konrad Lorenz, was the first man to come up with the idea of kindchenschema or ‘baby schema’. His theory asserts that chemical messengers dopamine and oxytocin are released when we look at cute babies, prompting a caregiving response. This reaction is biologically built-in and means that we nurture and protect the bambinos no matter what - even when they widdle on the Persian rug. So it looks like Barnes is staying.

The next step is to transform Barnes into a boating dog. Edwin is terrified of our little boat. Even crossing the threshold of the marina forces his tail between his legs and if, heaven forbid, you pop him onboard, he convulses like a jelly on a waterbed. He’s left home alone if we spend a day at sea. It’s a terrible shame.

It’s too late for Edwin, but we don’t want Barnes to be a water wally too. Having read up on the subject, the secret is to get the little ’un slowly acquainted with the boat. Step one was to bring him onboard for an explore and sniff. He seemed happy enough. Step two will be to carry him on and start the engine to get him accustomed to the noise. Step three is to take him on a very short trip. Step four onwards would be progressively longer trips until he’s totally comfortable with the idea. We’ll quickly learn if Barnes is the kind to get seasick. 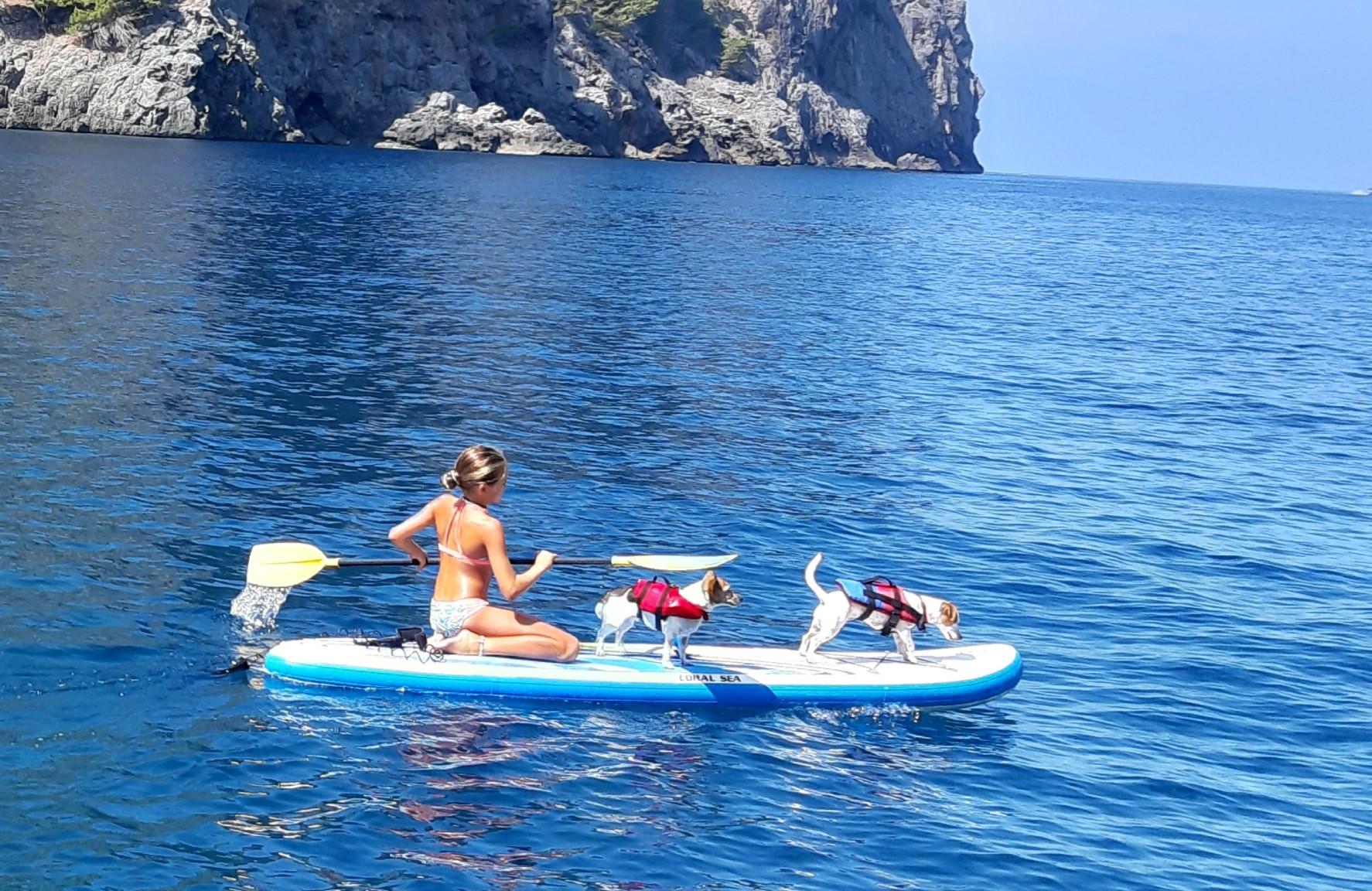 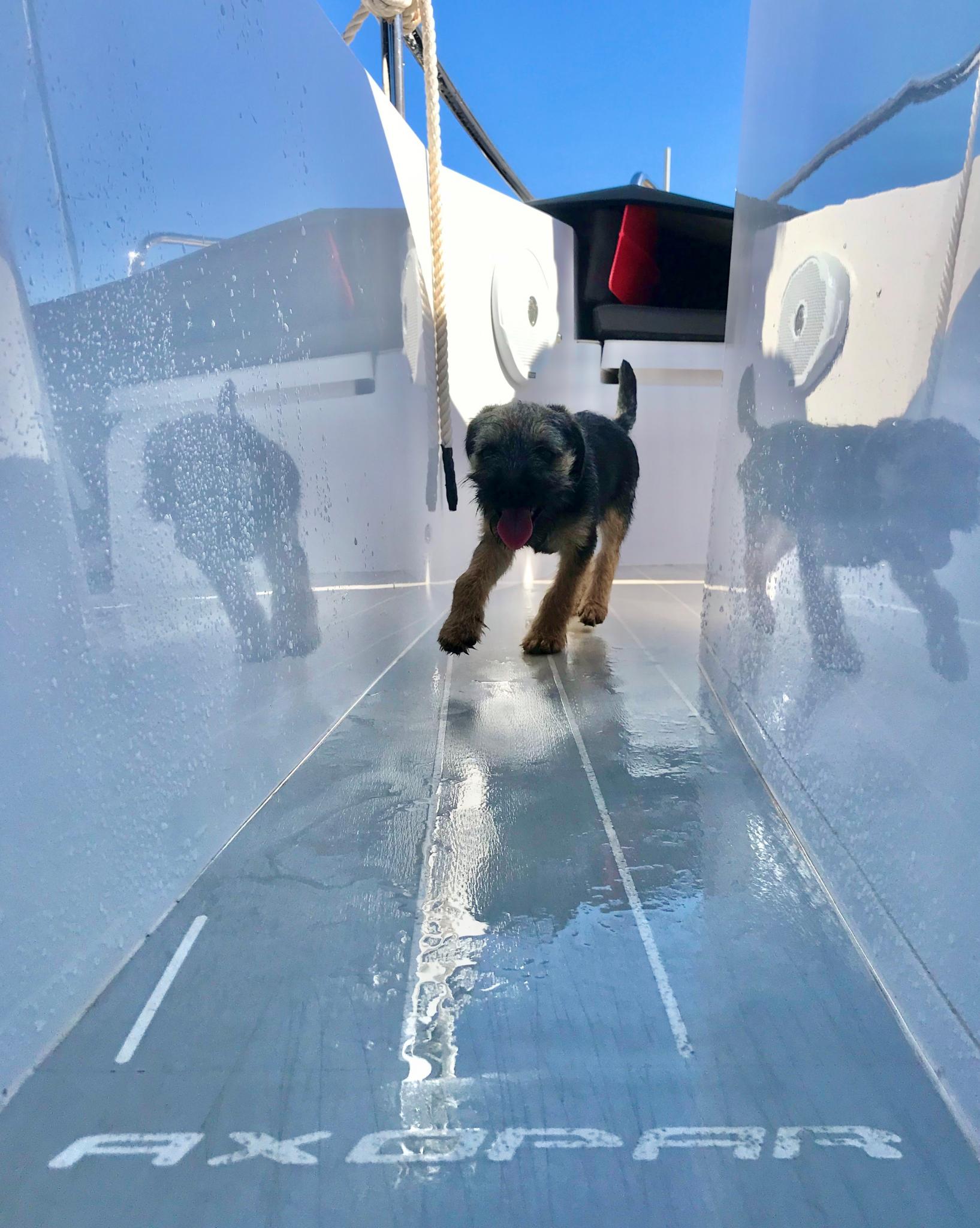 Experts also recommend testing to see if the doglet can swim. This is something we’ve already tried. Barnes has been in the pool not once, but twice. The first time, he fell in by accident and I successfully fished him out, heart in mouth. The second time, he wilfully launched himself into the water, and I once more fished him out. On both occasions he did display pretty neat doggy paddle skills while horizontal, but a touch of sinking while vertical. Unsurprisingly, specialists encourage you to purchase a teeny canine lifejacket - and gradually introduce using the ‘sniff first’ method.

Barnes should also be responsive to commands such as ‘sit’ and ‘stay’ to keep him out of trouble at sea. To this end, we start puppy classes with one of Majorca’s finest dog trainers, Joachim Sommer, this Sunday. Wish us luck. Rest assured you’ll be among the first to know if Barnes becomes a boating aficionado. 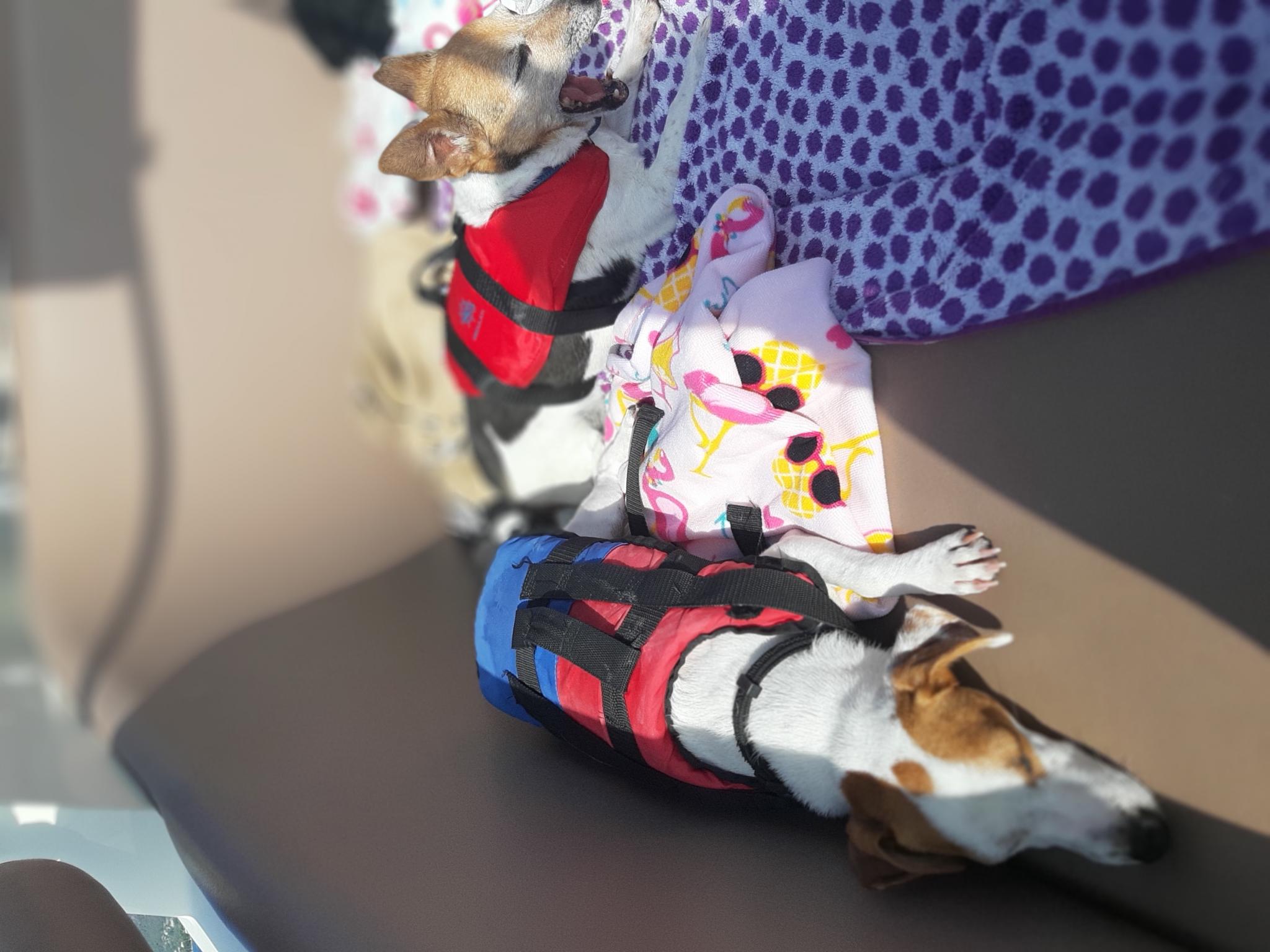 All this poochie chitchat reminds me of Sergi Basoli and his dog Nirvana. In June 2011, Catalonia-born Sergi kayaked 3,600km from Argelès-sur-Mer, just south of Perpignan, to Donostia, in San Sebastian. It took him 182 days. After a week’s rest, Sergi cycled back home to Granollers. In 2013, he decided to chuck in work indefinitely and clambered back into his kayak. A year into his journey, having already negotiated the southern French and northern Italian coastlines, Sergi was paddling around Sardinia when he found a scruffy, scared stray wandering around the port of Alghero. She hopped gingerly on board and, having named her Nirvana, they formed an inseparable partnership.

Nirvana didn’t take to the water straight away, prone to the occasional vomit, but she soon got used to it and the formidable would duo paddle between 10 and 30km each day. Sergi and Nirvana had no end date for their adventure, but sometime late 2017 the call of the land became too strong and they parked up in southern Italy. Today, Sergi, Nirvana and their adopted street cat Goku, are finalising repairs to 1949-built wooden boat Ría de Ferrol, before embarking on a voyage around the Mediterranean. (Follow them on instagram @sergibasoli.)

Closer to home, two of my favourite people in the world have expert sailor dogs. Sabine Rooker, Director of Scanner Spain, has brought her daughter and her dogs up on the water since day one. In fact, daughter Naomi did her first circumnavigation of Majorca at less than two months old. Their current dog, lively loveable two-year-old Jack Russell Lucy, joined the family in 2019. In that short time, she has been round the island twice and boated every weekend in the summer - clocking up a minimum of 450 nautical miles. Lucy actually hates the water but she loves boating, and paddleboarding. She’s super confident on their Scanner RIB and unafraid of the sea, although you won’t catch her swimming.

Meanwhile, business coach Sarah Powell has something in common with Sergi. Their family dog was also once an unloved stray. One rainy day in 2012, a bedraggled hound came and sat on their doorstep in Granada. Abandoned and badly treated by a local shepherd, chunks missing from both ears, Sarah whisked her to the vets for a health and microchip check. Having been given the all clear, they adopted her and suitably christened her Scruffy. She’s always loved the water, loved swimming, and Scruffy’s favourite game is to paddle after rocks thrown into the sea - it can become rather repetitive. The family decided that, alongside six-year-old human brother Santi, Scruffy would make an able crew member on their 30-foot sailing boat Vega. Their hunch was right, and thus far she has made the long passage from Majorca to Malaga, plus plenty of day trips. Scruffy has a particular talent for spotting dolphins and pilot whales. She’ll be barking on the bow and, a couple of minutes later, dolphins and pilot whales magically appear. 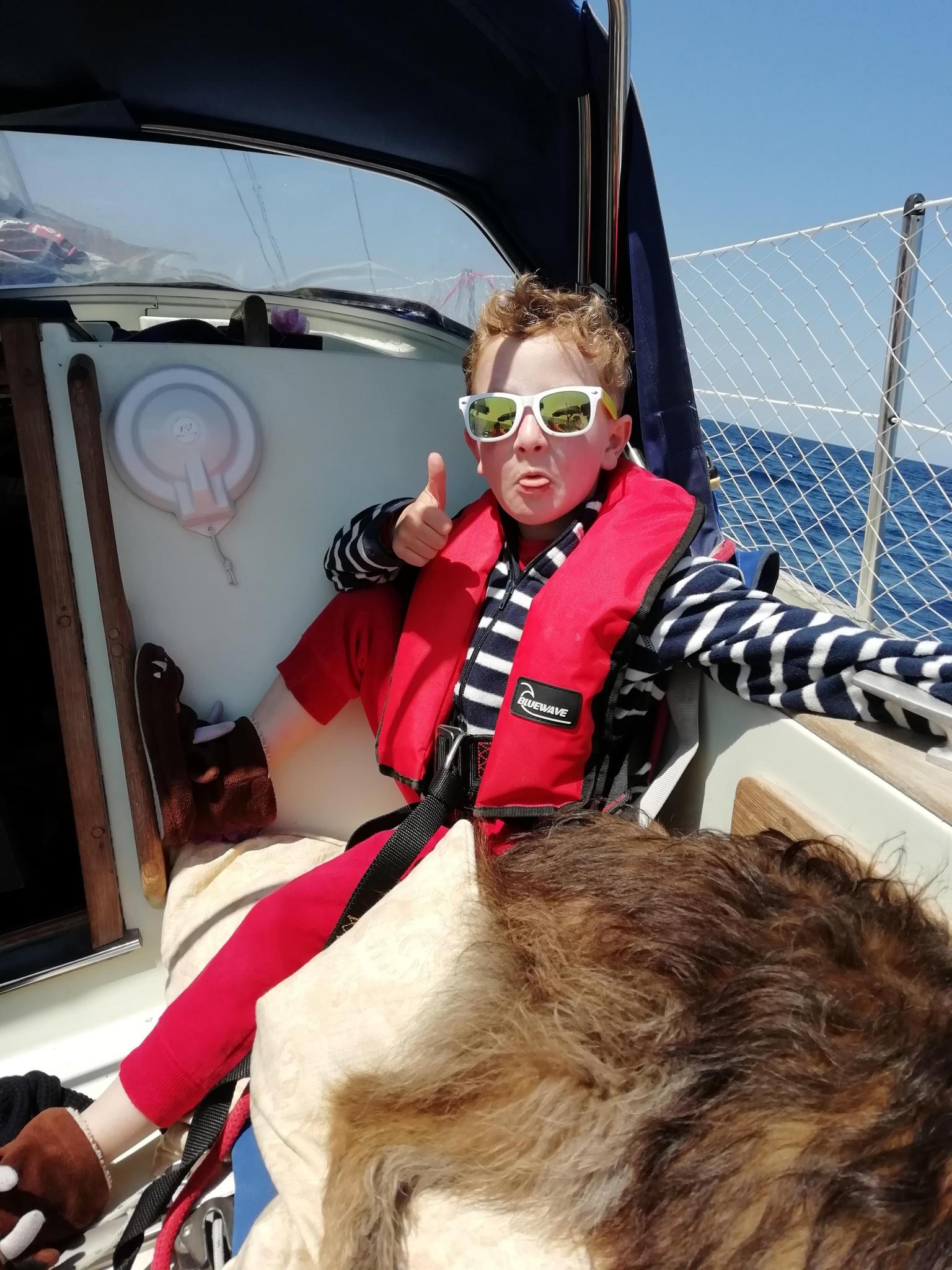 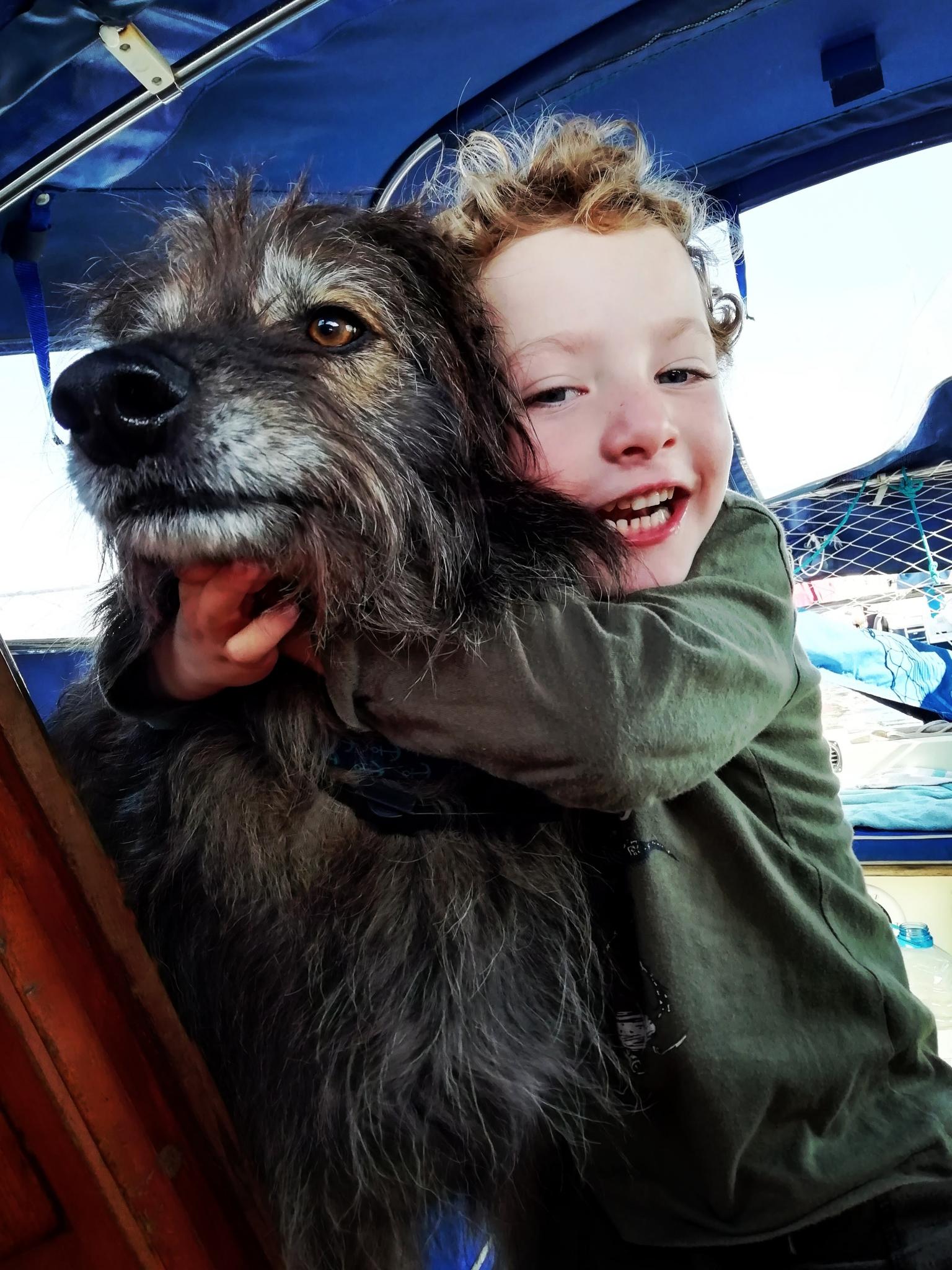 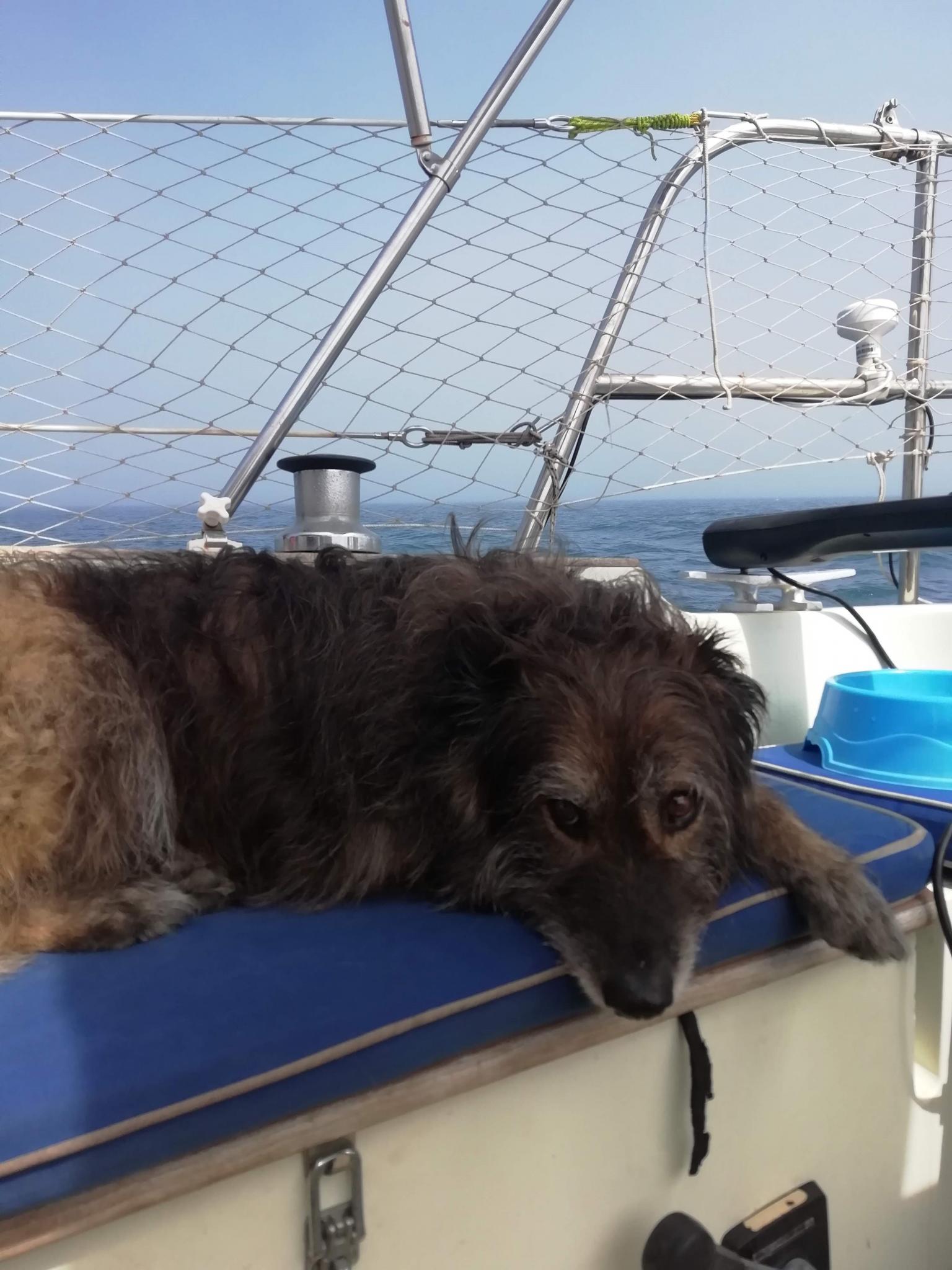 I wonder if we can train Barnes to bewitch aquatic mammals as well?