Let’s talk about tall structures. Ones that are so tall, it’s impossible to miss them. How about Italy’s notorious Leaning Tower of Pisa, a mighty 57 metres in height. Or Agra’s ivory-white Taj Mahal, standing 73 metres tall. Perhaps Westminster’s Elizabeth Tower (commonly referred to as Big Ben) soaring 96 metres high. Believe it if you will, the latest concept yacht from Royal Huisman and Malcolm McKeon Yacht Design makes all these fine erections pale into insignificance.

The sensational APEX 850 features a towering 107-metre air-draft rig (measured from the water’s surface to the highest point) - that’s more than 24 double-decker London buses piled one on top of the other. For sure, she will dominate the landscape wherever in the world she happens to be. 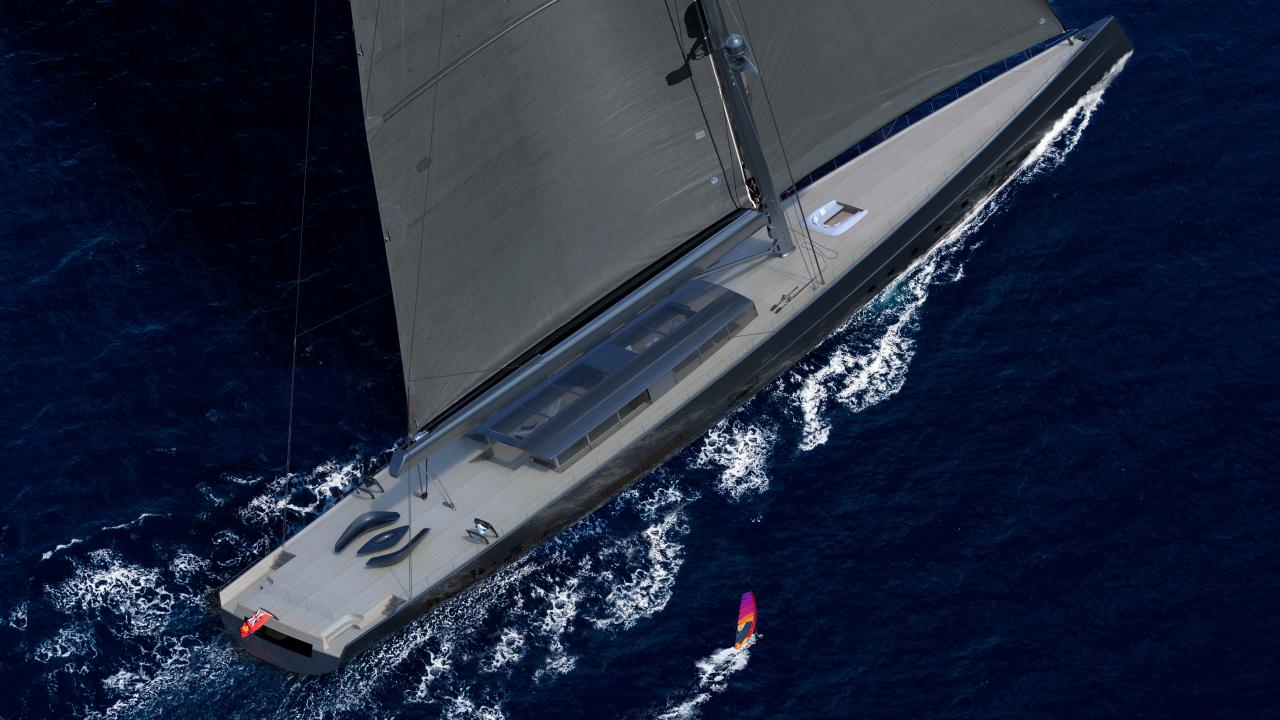 Set to be not only the world’s largest sloop but also the world’s largest aluminium sailing yacht, 85-metre APEX 850 is a tantalising prospect for an inspired owner. She effortlessly slips into the top ten largest private sailing boats, rubbing shoulders with the likes of 88-metre Maltese Falcon and 86-metre Aquijo. A couple of her Royal Huisman sisters also rank among that top ten, including 90-metre Athena and 81-metre Sea Eagle II - yes, the Dutch shipyard is no stranger to super-size splendour.

Thanks to the minimalist nature of the deck space, at a distance APEX 850 appears to be a mere wisp above the water She has no winches, furlers, mooring cleats, anchor gear or other deck equipment in eyesight, while the retro-style sculpted deck furniture is impossibly minimal. At the same time, the shimmering all-glass superstructure is virtually invisible and devoid of reflections - an almost ethereal trompe l’oeil effect.

This superstructure hosts the key social spaces yet, from the outside, you would not know it - and nor are you meant to. There are loungers and an impressive al-fresco dining area, all on one level, and with dramatic 360-degree views. Slide the glass shut to protect from the elements, or drop the glazing out of sight into hidden cassettes and create a vast uninterrupted stern-to-stern deck space. 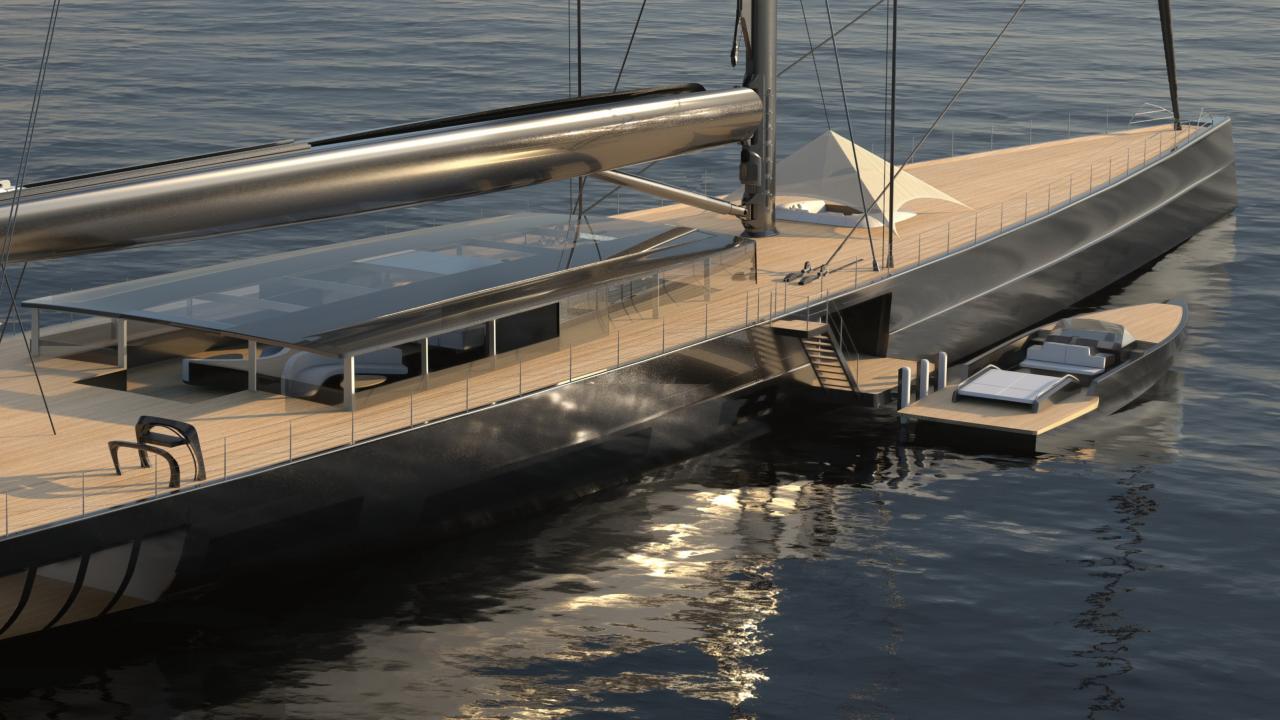 Ahead of the mast, an additional forward guest cockpit focusses attention on the horizon, and the yacht’s fast motion rushing towards it. Snug and secure for smaller groups, it has a Moroccan-style tent for shelter at anchor. Hidden beneath are two large eight-metre tenders, a crane to launch, and storage for other bulky equipment.

Take the stairs one deck below and be greeted with four magnificent 30m² guest suites, with flexible twin or double formats, plus Pullman berths for families, followed by the huge aft owners’ apartment. This occupies some 250m² of real estate, taking into account the full-beam bedroom, private lounge, sauna, walk-in wardrobe, bathroom, and private beach club with cinema. Floor-to-ceiling glass connects inside with outside, with guests offered separate deck access to the beach club - if they’re invited of course.

Fully aft, accessed via the aforementioned beach club, is a generous 50m² swim platform with gym and social area, a space that brings a very close connection with the surrounding seascape.

On the same level as the guest quarters are the forward crew quarters, with mess, galley, storage and utilities. Here, APEX 850 can accommodate 14 crew in a flexible mix of light-filled double, twin and single cabins.

Is that everything? Not quite. Designers have specified a wine cellar, a humidor for cigars, a private kitchenette in the owners’ suite, and a guest lobby with its own utilities. There’s also a 50m² full-beam midships ‘lazarette’ with bathroom facilities, storage for dive gear and water toys, and access to the swim platforms.

Lighter than steel, quieter than carbon, and near corrosion-free, APEX 850’s aluminium hull is remarkably strong and resilient. Her towering rig from market-leading spars and rigging specialists, Rondal, features a one-piece carbon mast and furling boom with continuous carbon rigging to support 3,200m² of upwind sail area and 4,700m² of downwind. The sail management system is operated by advanced push-button technologies and, despite the high loads, the gigantic mainsail and blade headsail can be hoisted and sheeted within a few short minutes - in Silent Mode, they can even be launched without so much as starting an engine.

APEX 850 will quickly gather pace and can easily reach speeds way in excess of 20 knots. The helm stations provide a clear line of sight over the low profile deckhouse, allowing the helmsman to navigate the yacht safely through mooring areas and scattered islands. She’s immensely manoeuvrable under main and blade jib, and can even be tacked by the helmsman alone. Those fortunate enough to experience the exhilaration of sailing aboard this ocean greyhound, as she cuts a perfect wake through tropical waters, will certainly come away with memories to last a lifetime. 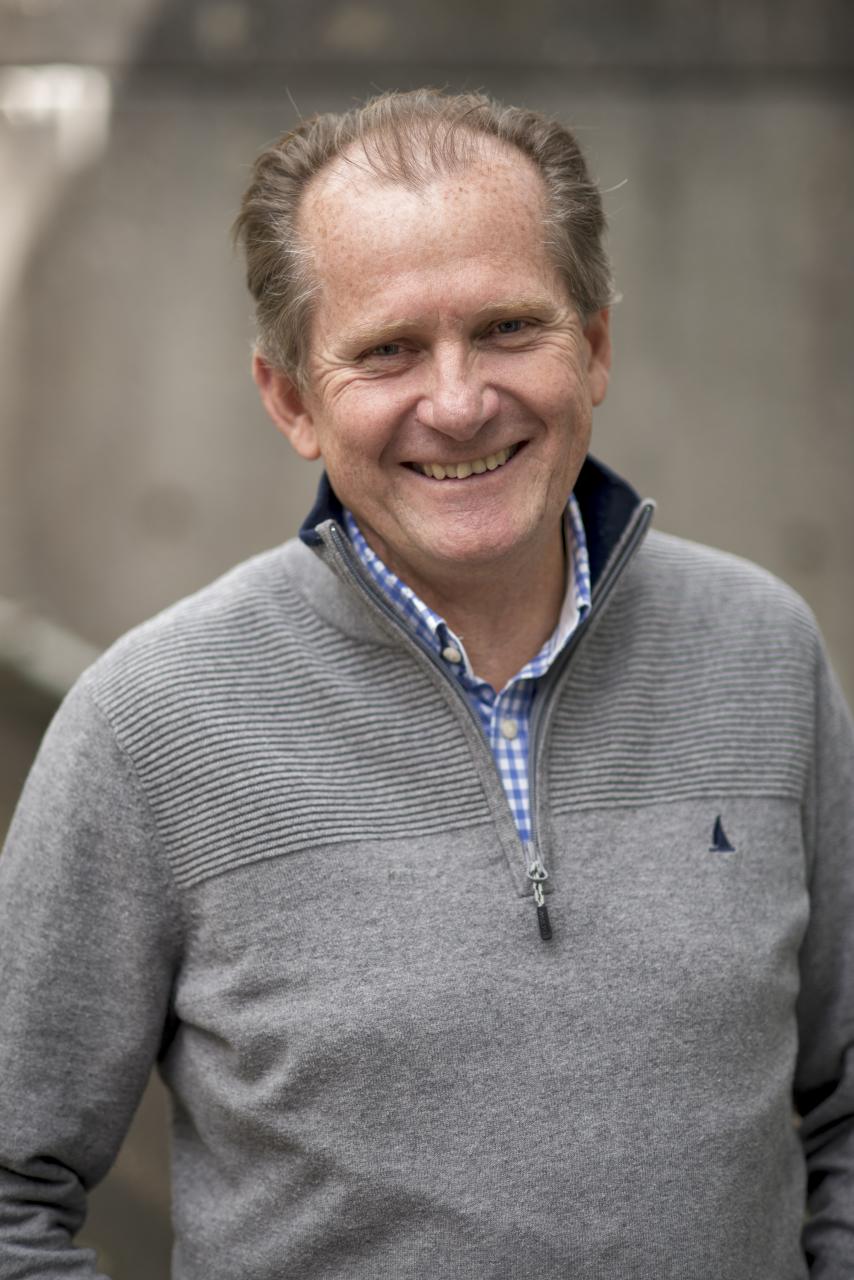 Malcolm McKeon said: “The sailing experience of APEX 850 will be sensational, with speeds in excess of wind speed in most conditions. Her retractable keel, optimised weight distribution and limited heel angle will provide stability, comfort and safety for all on board. Her twin high aspect rudders will provide a rapid response to her fly-by-wire helm.”
Royal Huisman CEO Jan Timmerman adds: “Two of the world’s ten largest sailing yachts, ATHENA and SEA EAGLE II, are Royal Huisman builds, and APEX 850 would make a fitting third, easily becoming the largest member of this elite circle. Every Royal Huisman yacht benefits from the research, innovations and challenges of our previous builds, ensuring this would be the finest yet.” 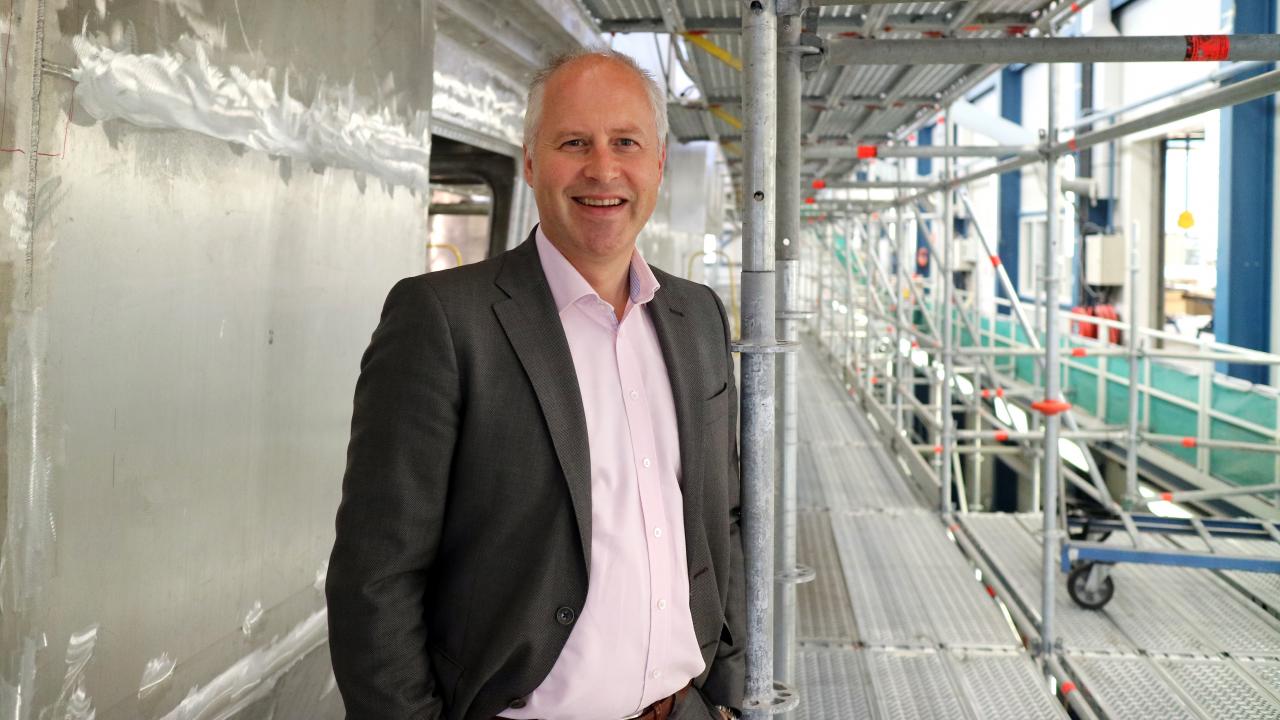 Now, all APEX 850 needs is the vision and creativity of a special owner, one who can add their own touch in terms of external hull and deck styling, and interior layout and design. Once the brainstorm is over, APEX 850 will be ready to commence construction and, several exciting months later, the world will look on in awe as she proudly sails the world’s waters.

Prospective owners can take a fully-immersive 3D virtual tour of APEX 850 with a preview available on the Royal Huisman website.