Construction of the first SeaBubbles will begin in 2021

With many disparate bodies responsible for keeping a tally, it’s not easy to count the number of cars, trucks and buses in the world, but analysts put estimates at around 1.4 billion - and rising. If the vehicle population continues to grow at this rate, then we could be in for 2.8 billion in 2036, and 4 billion in 2050. This all adds up to one hell of a traffic jam.

Naturally, this traffic is not evenly distributed across the planet. In general, the west has more cars per capita than the east (in the USA there’s currently over 800 cars per 1,000 population, while in Bangladesh there’s around three) but, with more of the developing world entering middle class, the pendulum continues to swing the other way and our global car park is set to burgeon. Granted, a large proportion of the vehicles of the future will be electric, perhaps as many as 58% of passenger vehicle sales by 2040, but while this will undoubtedly help with pollution, it doesn’t help with congestion. It’s time to get off the street and onto the water.

Established in France 2016, SeaBubbles is a start-up created by Alain Thébault and Anders Bringdal. Their vision was to design and manufacture electric hydrofoils, the size of small cars, with the intention to use them as water taxis in cities. 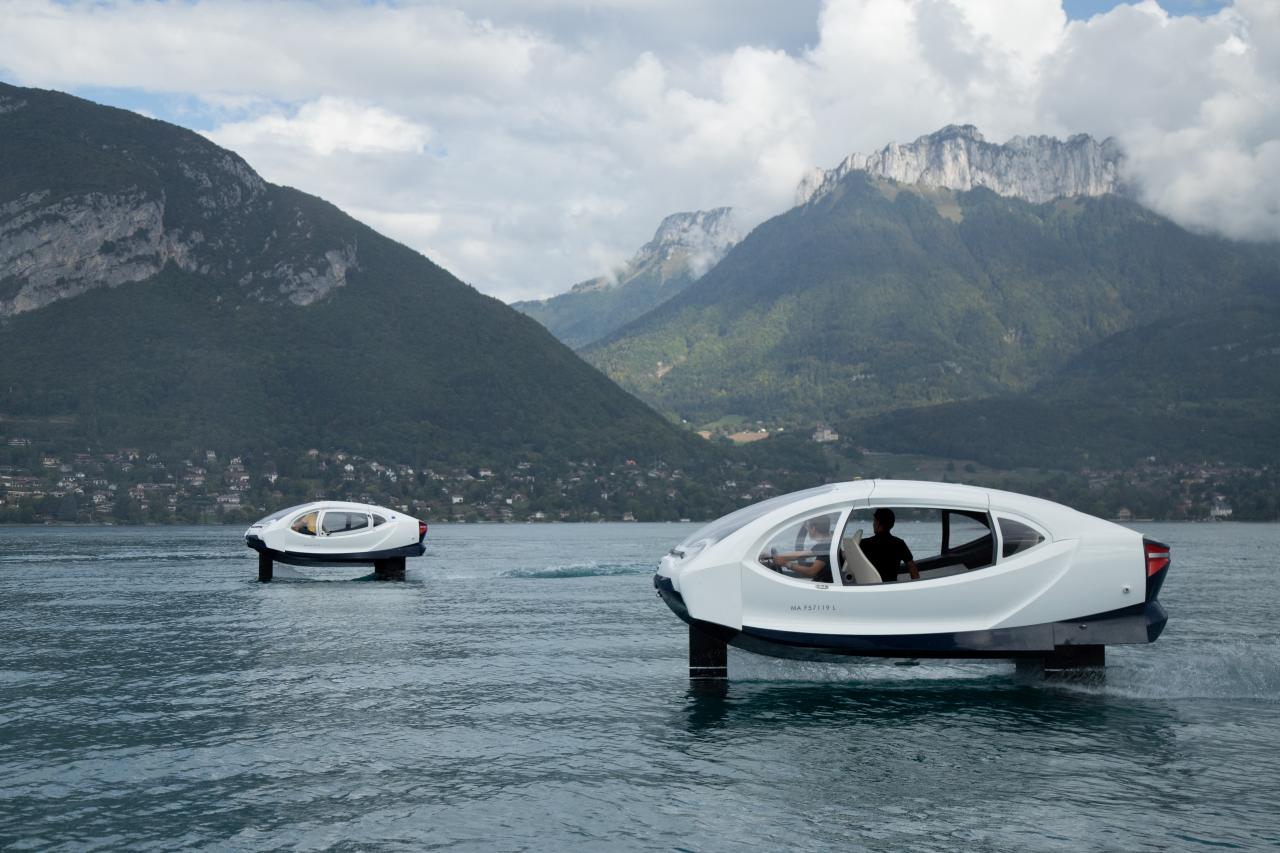 Born in Dijon in 1962, Alain Thébault is a French yachtsman who is no stranger to hydrofoil technology. Back in the late 1980s, Alain joined forces with fellow yachtsman Éric Tabarly to discuss the creation of an experimental hydrofoil sailing craft. Working alongside distinguished naval architects VPLP and a team of engineers, the aim was to put together a ‘foiler’ that could break speed records. The resultant Hydroptère trimaran hit the water in 1995 and reached 35 knots in the same year. Sadly, as time passed, the project stuttered and stalled. In the interim, Eric also tragically lost his life in 1998, drowning doing what he loved. 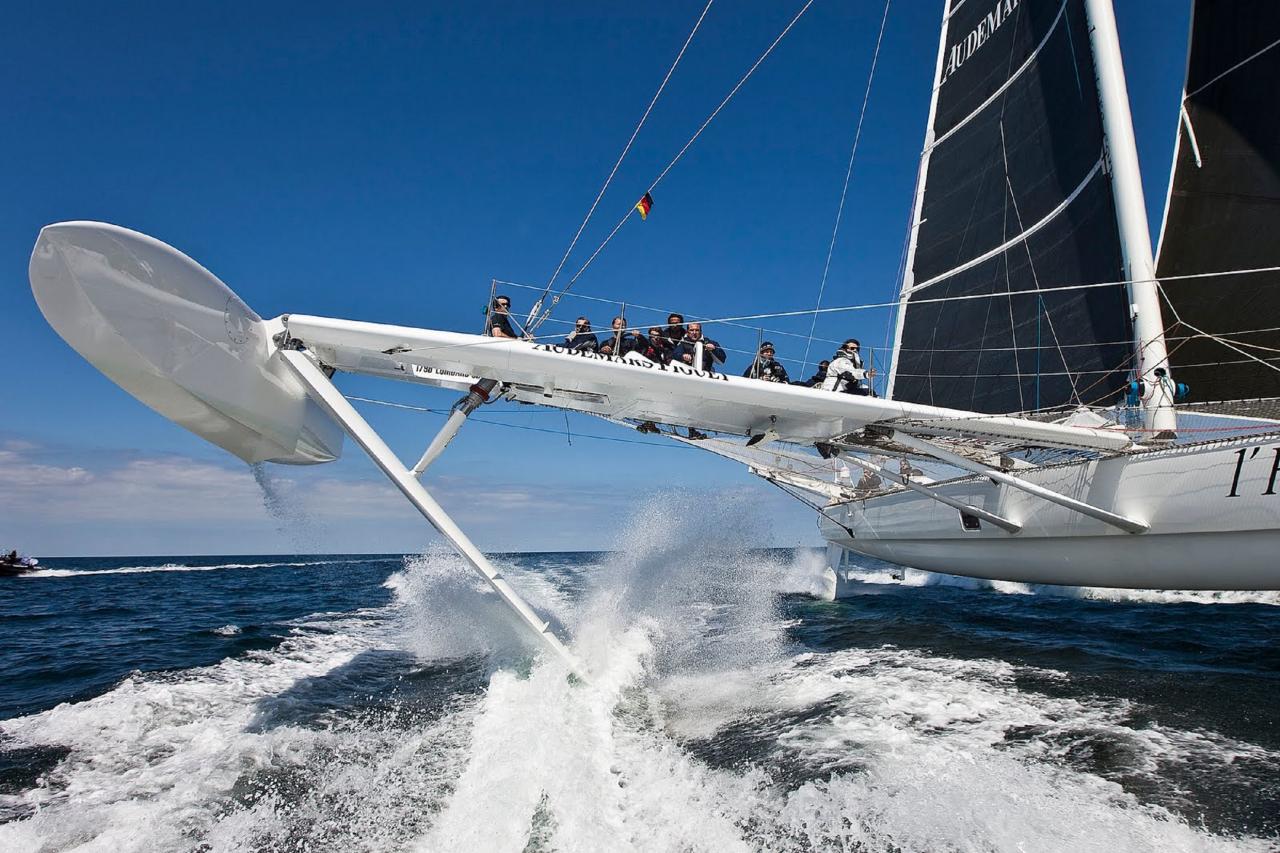 New hope came in the shape of Thierry Lombard, Chairman of newly-created Swiss design and engineering enterprise Hydros Innovation. In 2005, he took Hydroptère under his wing and gave it not only financial but also scientific support. After years of intensive research, failures and modifications, Hydroptère broke the outright world record in September 2009, sustaining a speed of 52.86 knots for 500 metres. A few months later in November, she broke the 50 knot barrier for an entire nautical mile with a speed of 50.17 knots.

In 2015, this icon of French speed sailing set off on the classic Transpac course, 2,215 nautical miles from LA to Honolulu, in hope of setting a new record. It wasn’t to be. The route didn’t suit such a specialised machine and Hydroptère was no longer the fastest sailing boat ever. Sponsors lost interest and, by 2016, an ‘abandoned vessel’ notice had been slapped on her hull. There she sat, basking in the Hawaiian sun, until French-US duo Gabriel Terrasse and Chris Welsh bought her for ‘the price of a Fiat Panda’ (8,500USD) at auction.

Gabriel had been infatuated with Hydroptère since clapping eyes on a photo of her at the 1997 Paris Boat Show. He became involved in the team during the glory years and now wanted to save her. On the other hand, Chris owned a boatyard on the shores of San Francisco. A partnership made in heaven. Hydroptère has been undergoing repairs ever since.

So what’s all the fuss about foils? Hydrofoils (hydro = operating in water) are nothing new, in fact they’ve been around since the 19th century. Essentially they’re wing-like pieces (foils) which are mounted on struts beneath the hull of a boat. As the craft gains speed, the foils elevate the hull out of the water, reducing the wetted area, resulting in less drag and more speed (and lower fuel consumption). 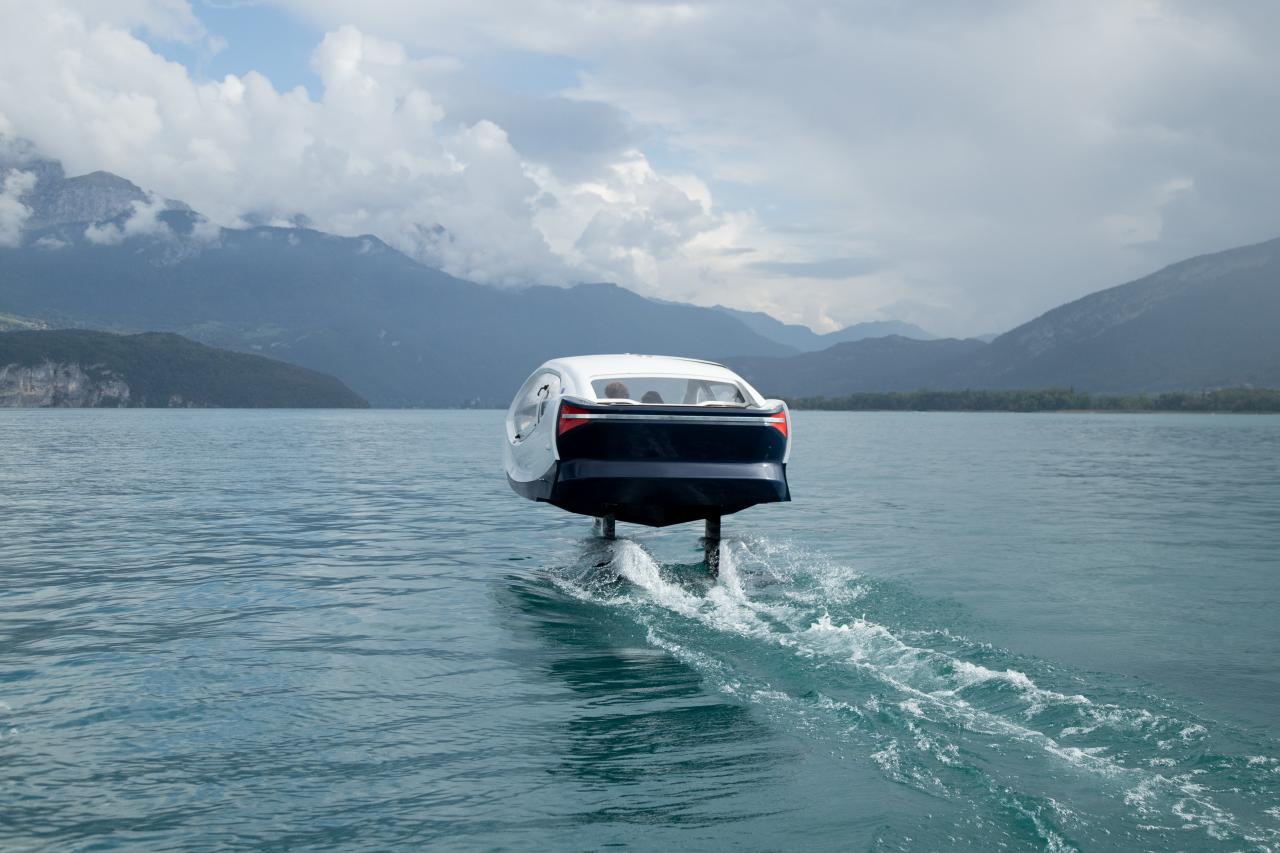 25 years after Hydroptère’s launch, Alain is now focussing on his SeaBubbles and reimagining what is possible when it comes to nautical transport. Marrying sleek design with strong sustainable credentials, he’s spearheading a zero-emission, zero-noise and zero-wave hydrofoil water vehicle for a modern world.

Alain explains: “We believe that pollution and global gridlock are not only threatening our welfare, but are ultimately threatening people’s freedom of mobility. Because in 2050, there will be 4 billion cars in the streets, and even if they are all powered by clean energies, it will still create a massive traffic jam… We believe that the future of mobility will rise from the water, a natural, historic path in the cities that has been underrated for a long time.” 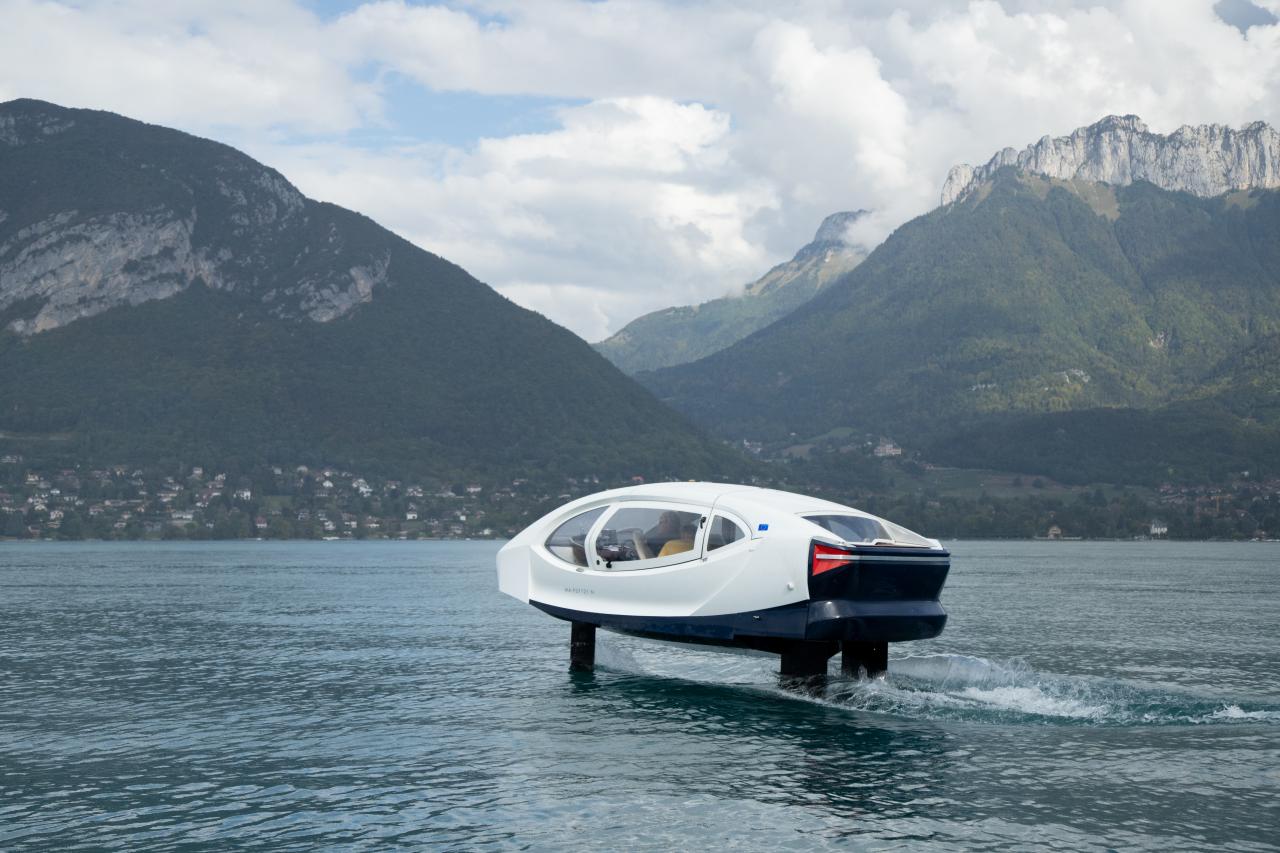 Now under the sponsorship of the Prince Albert II of Monaco Foundation, construction of the first SeaBubbles will begin in 2021, with the first batch of 50 SeaBubbles ready for delivery in 2022. Several cities, including Paris, Venice, Miami and Dubai, have already expressed an interest. Indeed, Alain hopes that in five short years we will see them in more than 50 waterfront locations.

While SeaBubble’s tester prototypes carried just four people, current designs have capacity for eight (one pilot plus seven passengers) travelling at speeds of 14 to 20 knots. Super-size SeaBubbles are also in the pipeline, accommodating 12 to 32 people.

The project has also evolved from an electric-only version to a more hybrid solution combining electricity with hydrogen - giving greater autonomy on a shorter charge. The ride is high and stable, avoiding any seasickness, and passengers will be able to download an Uber-style app with which they can order a SeaBubble and monitor current availability. 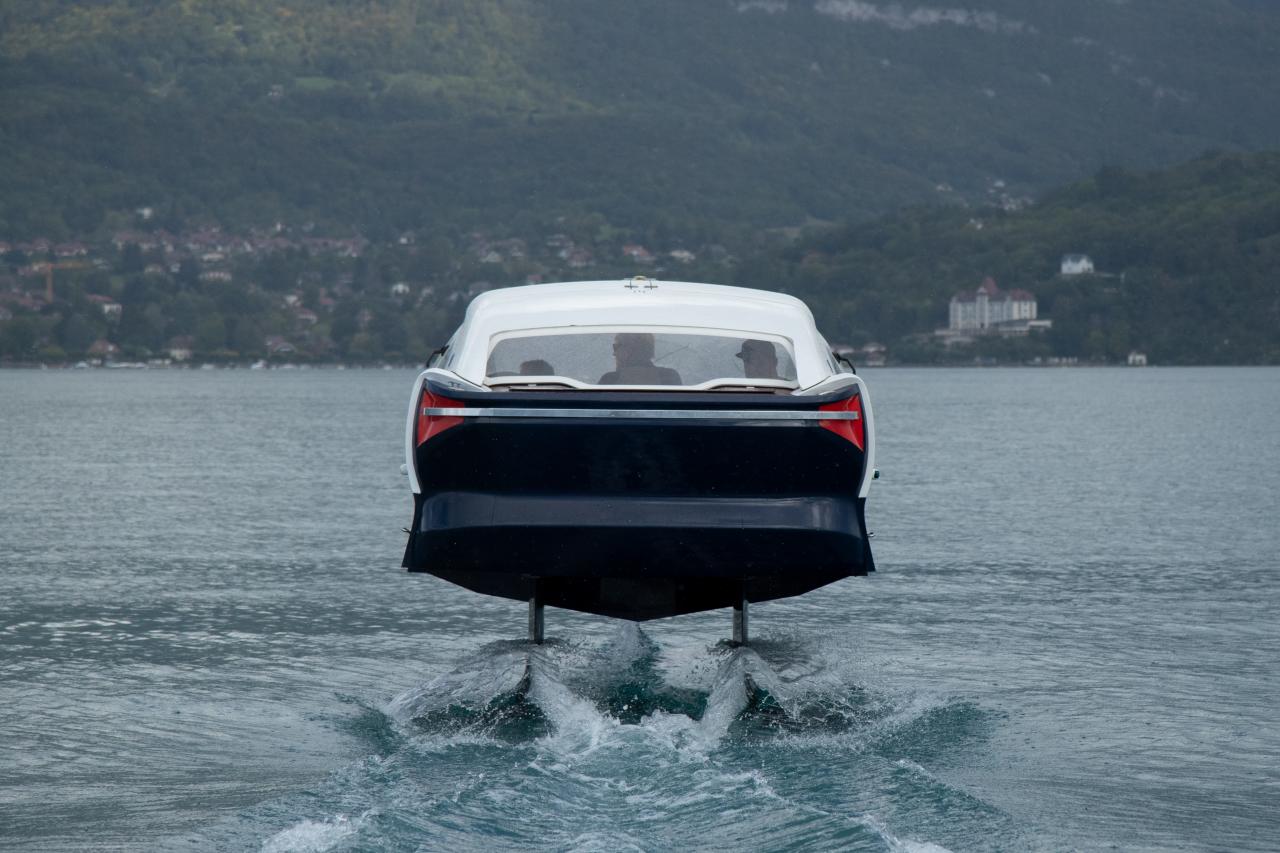 Each SeaBubble costs around 200,000 euros but, those who hail one, will pay the price of a taxi fare.
www.seabubbles.fr

Redeveloping the Hotel Formentor is "an honour"