Sea stars or starfish are one of the most iconic and emblematic marine species and several of them are present in the waters surrounding Mallorca. Although quiet and peaceful at first sight, these invertebrates hide many surprises and have exceptional abilities.

There are approximately 2.000 different species of starfish living in the world’s oceans today. These animals are present all around the world from shallow tropical waters to cold deep oceans up to 6 km depth. Starfish belong to the taxonomic group ‘Echinodermata’ (hard-skin in ancient Greek) which also include other hard-skin animals such as sand dollars, sea urchins, sea cucumbers, sea lilies and brittle stars.

Starfish have a central disk with 5 or more arms or limbs; some can have up to 50 arms! Their vital organs are placed in the arms rather than in the centre of the body. Underneath their arms are thousands of tube-like feet which allow them to move at a similar speed to a snail. These feet release a sticky substance that protects starfish from falling or drifting away with strong currents or tides. And they even have some primitive eyes located at the end of each limb that allows them to detect shapes and locate prey.

Contrary to what one might imagine, most starfish, at least the ones we find in Balearic waters, are voracious predators hunting mainly at night, and feeding on shellfish, crabs, worms, small fish and sea urchins. Other species are detritivores feeding on sediment, and a few are cannibals eating other starfish species. One of their most astonishing features is that they have enough strength to open up a closed shell, such as a mussel and rather than eating the mussel and digesting it in their body, they start the digestion outside by extracting their own stomach out.

Starfish have regenerative powers, and if they have an accident they can grow back lost body parts. For instance, even if they only have one arm left, they are able to grow back the rest. It is a slow process that sometimes can take up to a year, but these abilities allow them to reach ages of up to 35 years. 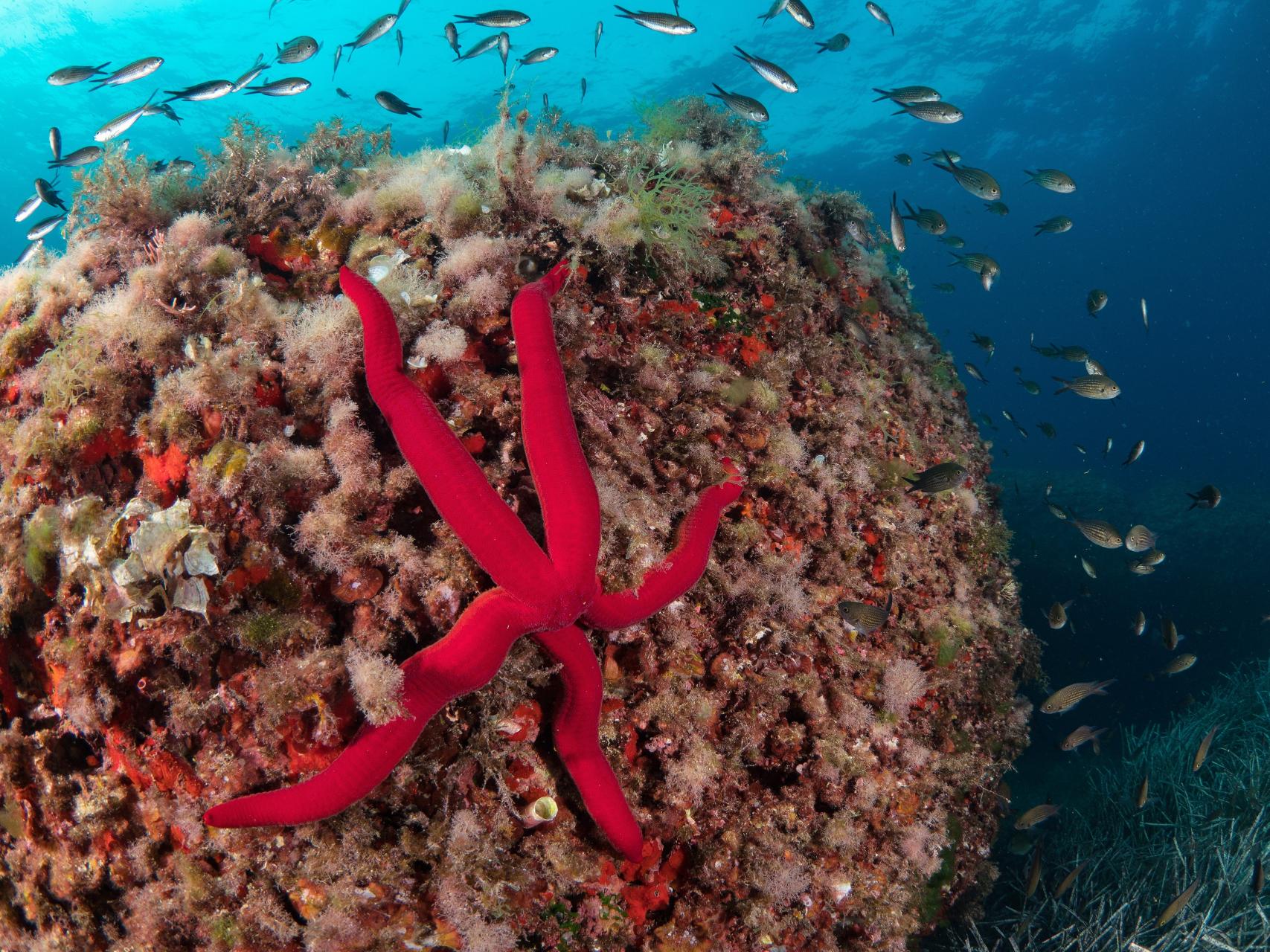 But, in spite of these powers and their hard skin, they are also prey to other animals with strong teeth such as rays, sharks, turtles and seagulls.

These are some examples of the most commonly found species in Balearic waters:

3 Astropecten spinulosus: endemic to the Balearic Islands with a greyish brown or pinkish colour, buries itself in the sand.

4 Blue spiny starfish (Coscinasterias tenuispina): usually lives under the stones and seagrass meadows where it feeds on detritus. With white and brown stains this species has more than 5 arms with small spines.

5 Starlet cushion star (Asterina gibbosa): small in size (between 2-4 cm) with short arms and pentagonal shape. Greenish grey or reddish, it can be found under rocks, sand and Posidonia meadows at shallow depths.

6 Spiny starfish (Marthasterias glacialis): the largest starfish of our coasts is greenish brown and with three rows of hard spines. Very voracious and active at night.

Starfish face a mix of threats and pressures and are vulnerable to wastewater pollution, physical damage from anchors and chains, and over-exploitation in locations where their catch is allowed for commercial purposes; something which fortunately, does not happen in the Balearics.

If you come across one of these beautiful animals while snorkelling or diving, it’s always better to enjoy them without touching them. But if you can’t resist the temptation to hold them in your hands please make sure you leave them exactly where you found them and do not take them out of the water.

Nice to read something that has nothing to do with covid!