It has been a long time coming because of the pandemic but the Top Gun sequel, Top Gun: Maverick, finally hits the cinema screens in Palma next Thursday and one of its biggest stars was in Palma during the making of the blockbuster starring Tom Cruise.

In March, 2019, the USS Abraham Lincoln visited Palma, with its carrier strike group, to train, patrol and make a show of force in regions where the Russian navy has grown more active, and it was used for the filming of the new sequel to Top Gun.

So, should you, for any reason, have missed the USS Abraham Lincoln moored in the Bay of Palma next week, don’t worry because next it will be on the big screen.

The sequel to the 1986 Hollywood blockbuster Top Gun was being partly filmed aboard the Norfolk-based aircraft carrier before she set sail for the Mediterranean.

At the time, according to a photo on Tom Cruise’s Instagram account, which featured him in a flight suit near a fighter jet with the same helmet he wore in the original film and referenced with an oft-quoted line from the original movie: “I feel the need, the need for speed,” the first day of shooting took place at Naval Air Station North Island in California.

On Wednesday, Tom Cruise rolled into the Cannes Film Festival – jet planes in tow – cranking up festivities with action, star power and autograph signings on the red carpet.

Fans greeted him with whoops and hollers and the French Air Force aerobatic team Patrouille de France flew overhead, spraying the sky with coloured smoke trails in red, white and blue. Cruise was in the city to promote the long-awaited Top Gun: Maverick movie sequel, which was held back for two years because of the coronavirus pandemic. 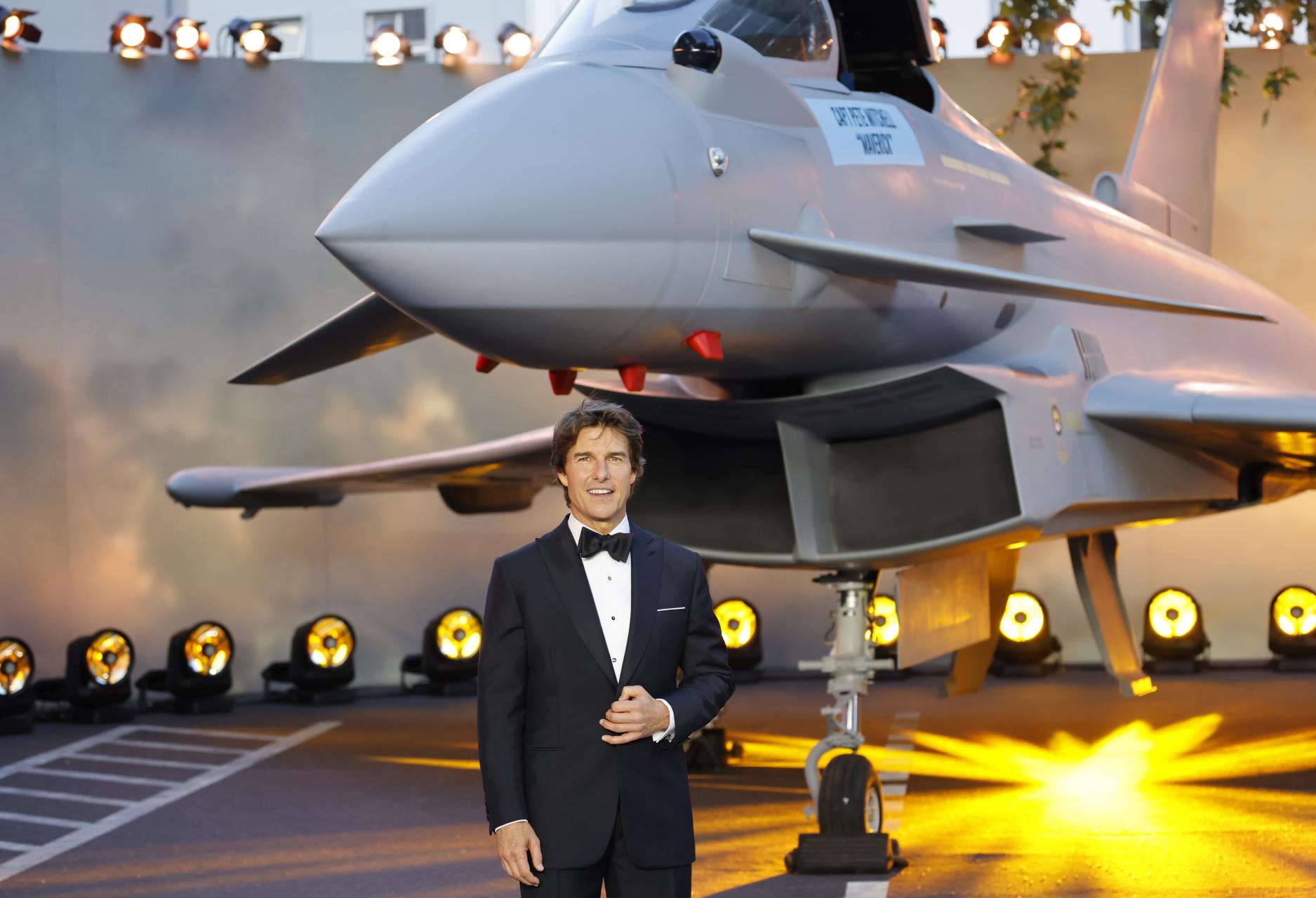 A big ticket draw, it has added considerable buzz to the world’s largest film festival as it marks a splashy return for its 75th anniversary edition.

In a tuxedo and black bowtie, the American star worked the crowd lined up along the red carpet, signing photos and posing for selfies.

He posed with fellow actors Jennifer Connelly and Miles Teller, clapping festival director Thierry Fremaux on the back when the jets flew over head. Cruise had arrived earlier in the day, stepping out of a black car to the chants of “Tom! Tom!”
Some fans had been camping out since breakfast.
“I was like, ‘I must see him, absolutely, one way or another!’” said Oriane Holz, 22. She held up a sign asking for tickets to the screening of the film.

Katy McNulty, 46 and Joanne Routledge, 52, had been on the road since before dawn. The pair were up at 3 am and travelled from the north of England to Scotland, taking a plane from Edinburgh to Nice, and then a train to Cannes to arrive in time for Cruise’s appearance.
What were they angling for?

“A selfie with Tom because we promised them at work that’s what we’ll deliver - and they told us we wouldn’t,“ said Routledge.
Stan Hamilton, an American student learning French in Cannes, said: “Me and my father watched ‘Top Gun’ when I was a child. I wish he could be here with me now.”

Tom Cruise also visited Mallorca with his ex-wife Nicole Kidman. They sailed across from Minorca to visit Michael Douglas at his house in Valldemossa.