Protesters threw cans, stones and flares at riot police, and set rubbish containers and cardboard on fire in the streets of Barcelona last night. | EFE/Enric Fontcuberta

Protesters and police clashed late yesterday in Barcelona during rallies against the jailing of nine Catalan separatist leaders, with the unusually tense confrontations turning into a major challenge for Spanish and regional authorities.

Protesters threw cans, stones and flares at riot police, and set garbage containers and cardboard on fire in the middle of several streets in Barcelona, including a thoroughfare housing designer stores and the stock exchange.

@Europol @EU_Commission @Interpol Not good comming to #Barcelona
The former president of Catalonia Carles Puigdemont, wanted by the Spanish Justice, is still hiding in #Brussels. Mayor Barcelona and the Government of Catalonia, have promoted these attacks, are responsible https://t.co/jrHUDFFs9G

Fences were on fire next to La Pedrera, one of Catalan architect Antoni Gaudi's most famous buildings and one of the city's main tourist attractions. 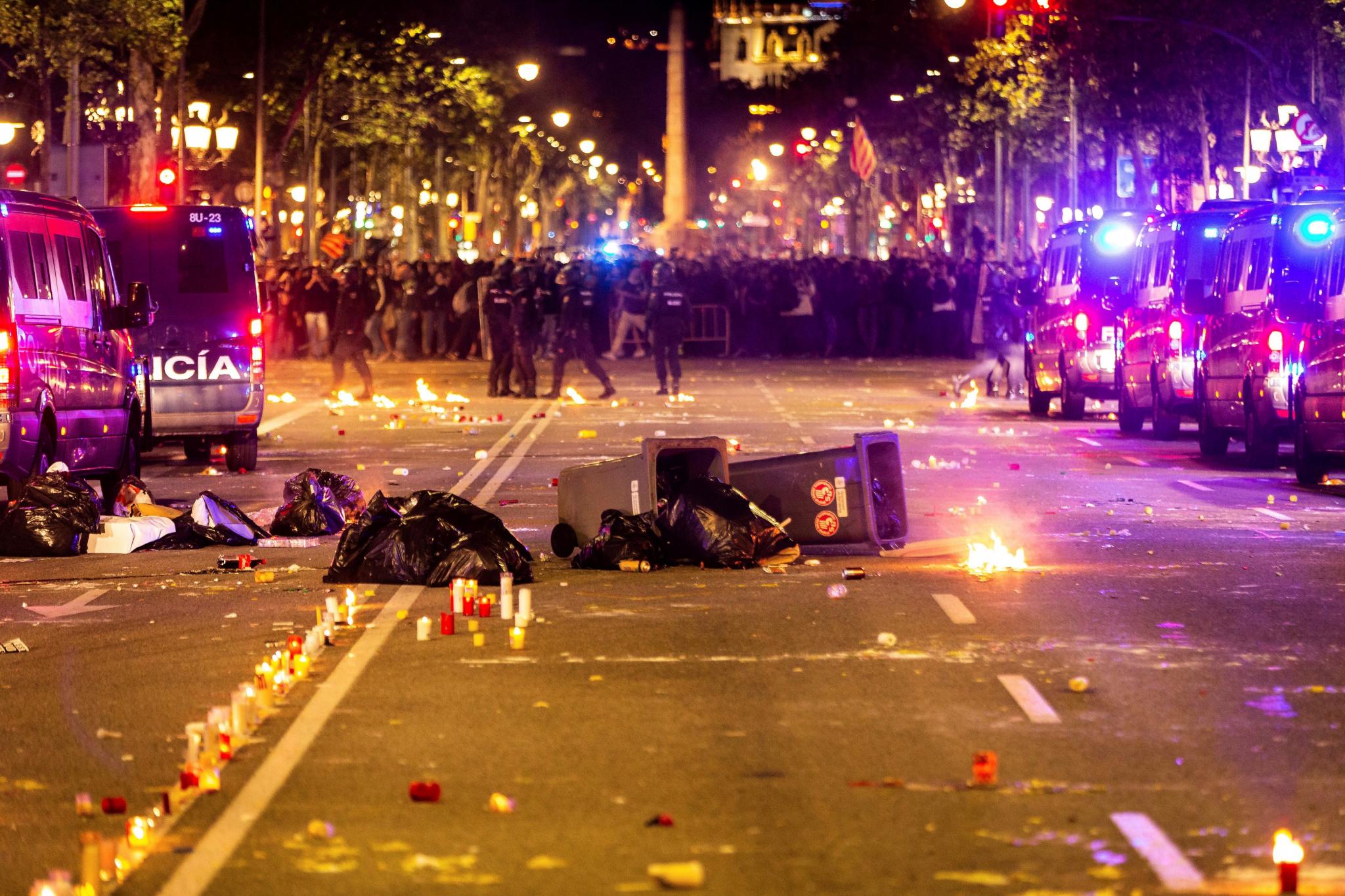 Police charged several times through the crowd with batons and fired foam projectiles at the protesters. A spokesman for the regional Mossos police said they were trying to make space around the local headquarters of the Spanish government. Four people were detained, the spokesman said.

A Reuters cameraman was hit by police in the leg while filming them charge at protesters. The cameraman, clearly identified as a journalist by a press armband, was hit from behind by a police baton.

This was the second day of protests after the Supreme Court sentenced nine separatist leaders to nine to 13 years in jail over their role in a failed bid to break away from Spain in 2017. 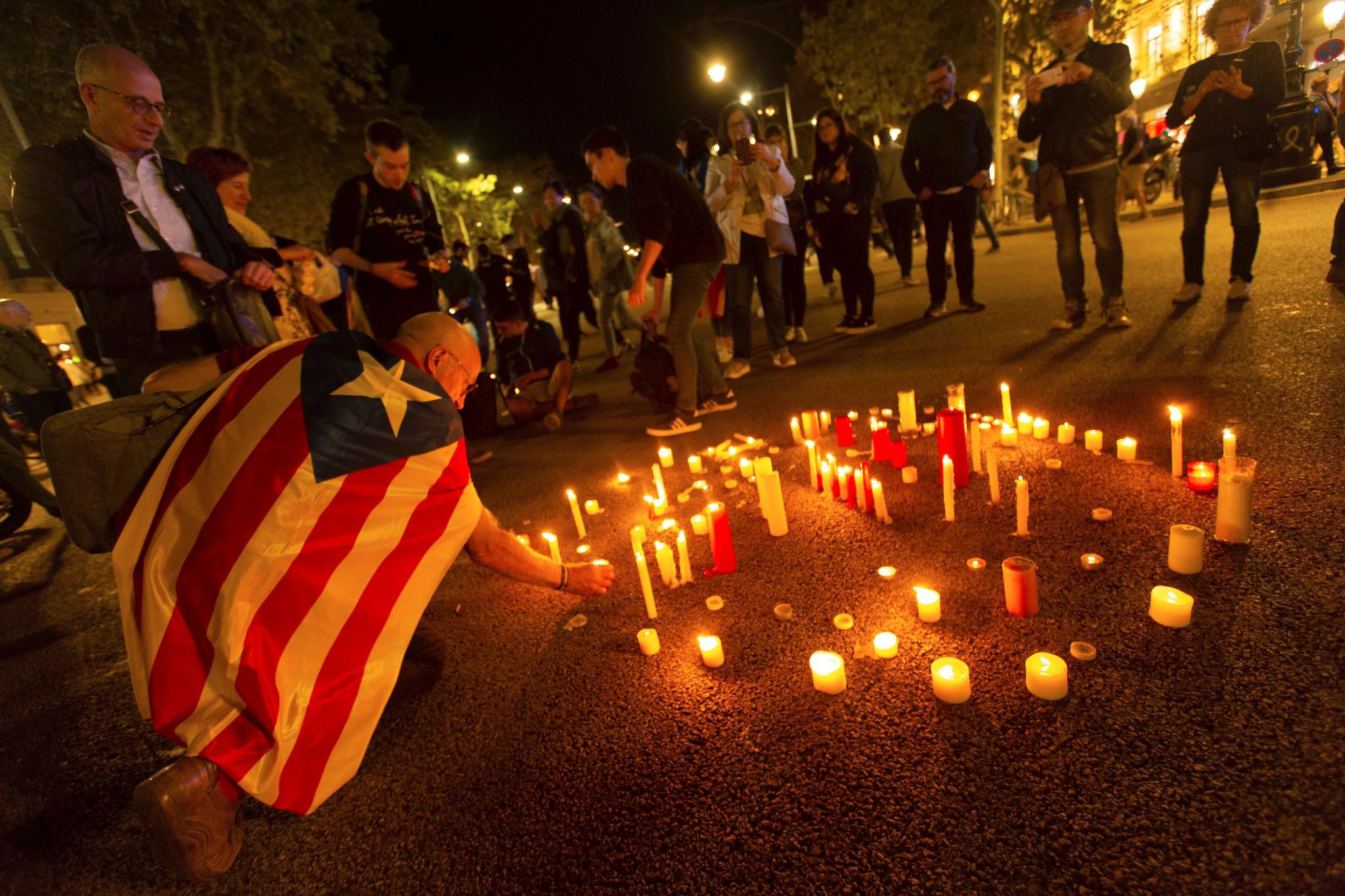 The clashes are a challenge for the regional, pro-independence authorities and the central government in Madrid, both of which are facing a fragmented political landscape and an economic slowdown.

Just watched rows of police run up the main parade in Barcelona shooting rubber bullets into crowds of people at a candle vigil for the Catalan prisoners. Turned the situation into a scary and violent one instantly. Now thousands running from the police in every direction. pic.twitter.com/PfN4eg9KEb

Catalan separatism has long prided itself on being a peaceful movement and its leaders say that has not changed.

But there were concerns in Madrid already before Monday's Supreme Court ruling that heavy jail sentences for the separatist leaders could unleash pent-up frustration among a radicalised fringe, a senior parliamentary source told Reuters.

A spokeswoman for the pro-independence Catalan regional government was quick to say that separatists had proven they were peaceful and that an isolated group behaved violently, sullying their reputation.

Spain's acting government warned in a statement it would step in if needed to guarantee security in the region, without elaborating.

"A minority is trying to impose violence in the streets of Catalan cities," the statement said. "It is obvious that this is not a peaceful movement," the government said, while praising coordination between regional and national police

Let the #world see it: the ?? #Spanish police try to run over protesters in #Barcelona. Here is the real violence. The state is already looking for dead. The images speak for themselves. #SpainIsAFascitState@UN@UNHumanRights@Europarl_EN#Europeanpic.twitter.com/uLZuzYPvly

Catalonia's independence drive triggered Spain's biggest political crisis in decades in 2017 and still dominates much of the country's fractured political debate. It was a major theme in a parliamentary election in April and will likely be as well for the new, snap election set for Nov. 10.

Spain's main parties have consistently refused to hold an independence referendum in Catalonia, although the Socialists say they are open to dialogue on other issues.
Police also charged protesters in the cities of Girona and Tarragona, TV footage showed. Catalan police warned people on Twitter not to approach the epicentre of protests in Barcelona and Girona for safety reasons. 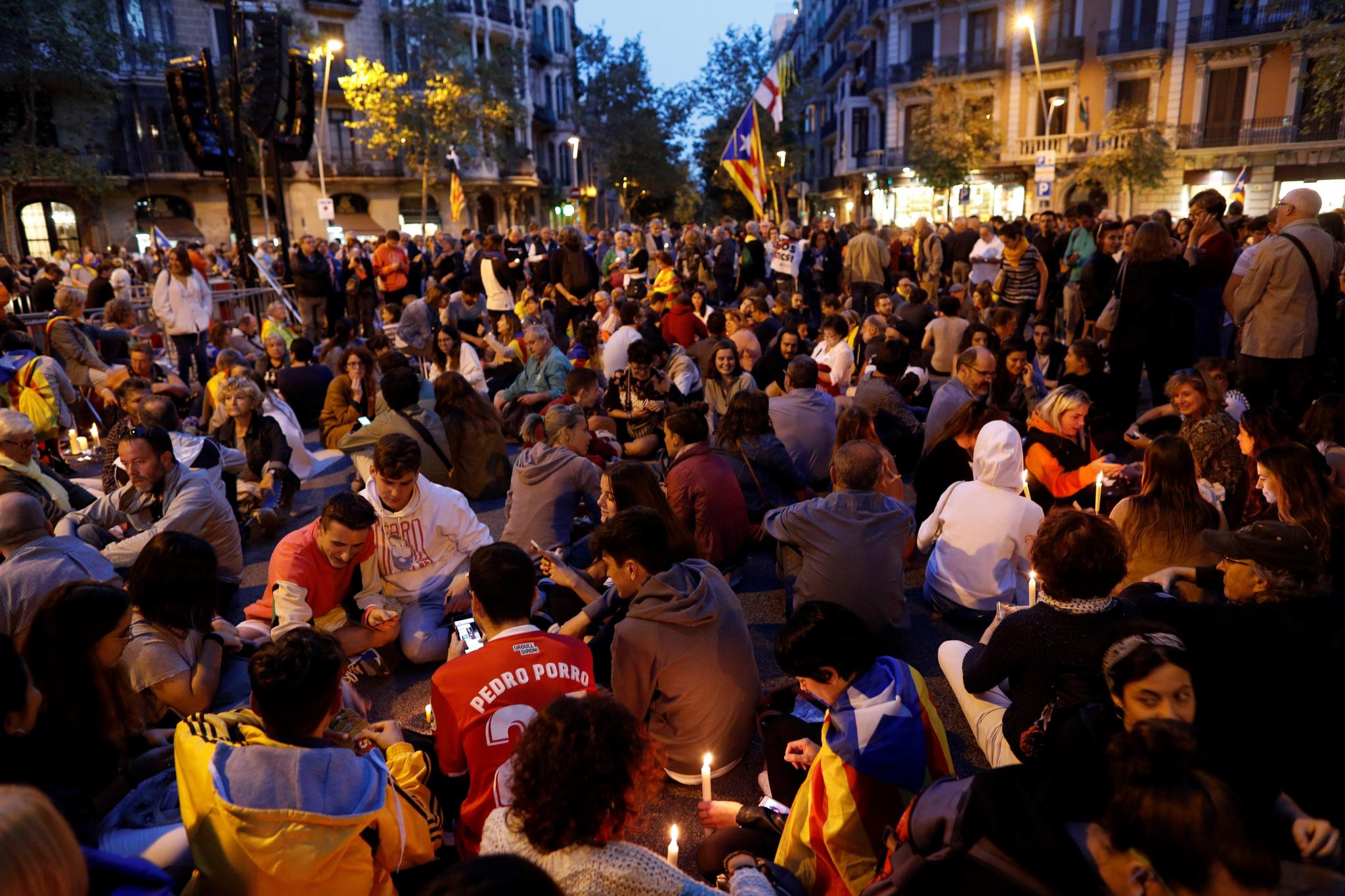 Reuters reporters saw Spanish national police firing blanks in the air from rubber bullet guns in Barcelona. Police could not immediately be reached for comment.

Earlier in the evening, thousands of peaceful demonstrators had taken to the streets of the regional capital. Some lit candles and chanted "Freedom for political prisoners".

Pro-independence leaders have vowed to keep pushing for a new referendum on secession, saying Monday's prison sentences strengthened the movement.

Oriol Junqueras, who was given the longest sentence of 13 years for his role in organising the 2017 referendum which was ruled illegal, told Reuters in his first interview after the sentence that it would only galvanize the independence movement.

"We're not going to stop thinking what we think, ideals can't be derailed by (jail) sentences," he said, adding that a new plebiscite was "inevitable".

"This is a very long process, but we will see results as we did with the feminist movement, how they grew until becoming massive and achieving the rights that they were seeking,» she said, calling for «everyone to take to the streets".