Investment of over 250 million euros in Balearics solar energy

Up to the end of 2022, some 260 million euros of investment will be made in photovoltaic installations in the Balearics. Fifty-five projects will mean the generation of 326 megawatts; 46 of the solar parks will be in Majorca. Minorca will have six, Ibiza two and Formentera one. 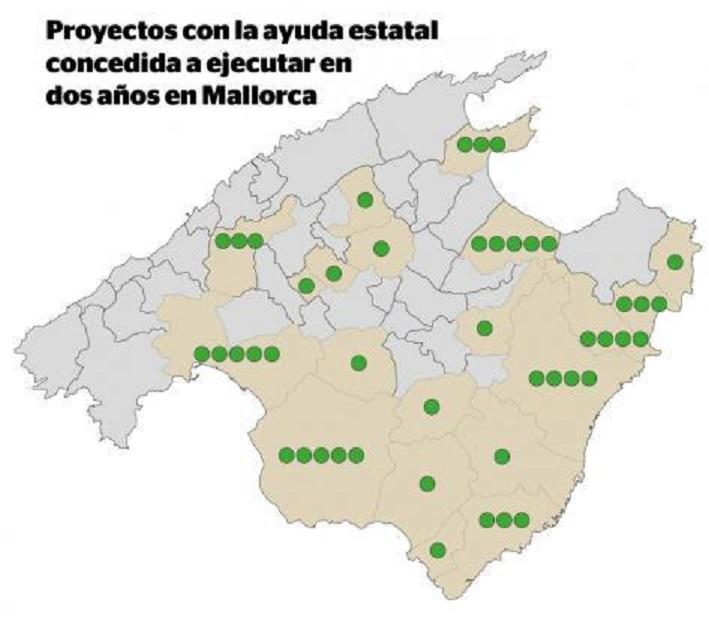 The sites of the installations in Majorca.

These projects fall under the Solbal solar energy promotion in the Balearics. While they are privately funded, the Solbal projects also have state funding via the Institute for Energy Diversification and Saving and European funding - the European Regional Development Fund. Some 15% of the investment (40 million euros) comes from these sources.

Whereas there has been financial assistance for this type of project on the mainland, it has been absent in the Balearics. It had been demanded for years but not forthcoming until the Solbal campaign was set up; the grants were finally determined in October.

The campaign, in the words of the director general for energy and climate change, Aitor Urresti, has been “a great success”.

Most of the schemes are on a decent scale, meaning that they can produce up to around five megawatts. The installations and the panels are nevertheless quite small, which was one of the government’s aims.

The largest photovoltaic park will be in Cap Blanc, Llucmajor. This will be capable of generating fifty megawatts. Typically, the others will produce between two and five.

The installations and their capacity.

Environmental assessment is needed, and Urresti warns that if this means delays, the funding could be withdrawn. It is on condition that the projects are undertaken before the end of 2022. If they all become operational, they will increase solar’s contribution to the Balearics energy mix from three to ten per cent. “This will be a significant increase in a short period of time,” says Urresti.

In the meantime, the energy minister has claimed that the Balearics are the “envy” of other regions.

Juan Pedro Yllanes was another minister whose budget was being debated in parliament this week. Minister for energy transition and the productive sectors, Yllanes stated that the Balearics are the “envy” of other regions because of the energy transition strategy for the islands, a key facet of which is the Balearics Energy Institute, a body which comes under his ministry. Facing proposed amendment to his entire budget from opposition parties, which question the necessity for this institute, Yllanes insisted that unlike other regions which are contemplating legislation for tackling climate change, the Balearics have a “legal instrument”, which is the institute.

The other regions, he said, are asking the Balearics for help in establishing their own mechanisms.

Josep Melià of El Pi was among opposition party representatives who was unconvinced. “We aren’t the envy of anyone,” and Melià noted that the Balearics are in fact at the back of the queue when it comes to the generation of renewable energy. “This is all a drama. You (the government) talk and talk. But what advances have there been over the past four years? Very few. Irrelevant.”

Sergio Rodríguez of Vox made an ironic observation in querying the amount destined to energy and its relationship with the climate emergency. “In order to stop the end of the world we have 33 million euros. If there is a climate emergency, it has taken the government four years to find a way to it.”

Yllanes rejected accusations that the government was posturing with regard to the climate emergency, but he recognised that his budget is “limited”. He defended projects that are to be undertaken by the current government, such as the gradual closure of the Es Murterar power station in Alcudia.

Rodríguez said that this wasn’t posturing but was irresponsible until such a time as the Balearics can depend on the second cable for supplying electricity from the mainland.