A rap for Majorca's farmers

While the crisis has engulfed us and has therefore been dominating all news, one question many of you will no doubt have been asking (or more likely haven't been asking) is what has happened to Majorcan rapper-in-exile, Valtonyc. Well, what has happened to him? What actually does he do with himself in Belgium? It's not as if he's managed to secure himself a gig at the European Parliament like Carles Puigdemont has. Pertinent to the crisis, does he have a European health card on him, just in case? Can he phone the Balearic health service and get IB-Salut to automatically renew the card if it runs out?

Answers to these questions and more remain a mystery, but for a brief time Valtonyc reappeared in our lives, thanks to the Farmers Union. It was only brief because the Farmers Union was rapidly subject to threats on social media on account of this reappearance. The Sa Pobla rapper had returned to agricultural roots in having his image feature in the Farmers Union campaign to get us all to buy local. When the image emerged, those who don't take too kindly to Valtonyc warned the union that if the image wasn't removed, then they wouldn't buy local. The image was removed, the gen-sec of the union explaining that Valtonyc had been used because he's "well known" (to some anyway) and refusing to be drawn into controversy. All the union was interested in was "defending the consumption of local produce as a necessary means of supporting Majorca's farmers".

The union was meanwhile engaged in its ongoing spat with the agriculture ministry. An alliance has been formed with the Asaja agricultural businesses association and the small farmers and livestock breeders association for the purpose of issuing regular demands for promoting local produce. This farming alliance doesn't seem to rate the agriculture minister, Mae de la Concha, or senior officials at the ministry who Mae took on when she was made minister.

These senior officials were necessary, given that Mae's background - prior to having become something in Podemos and then finding herself in the Balearic government - was running a bookshop in Minorca. Nevertheless, and despite certain officials having been uprooted from the mainland and therefore being in receipt of the twenty-two grand a year salary bonus, they haven't convinced the Farmers Union and others.

The latest statement from the farming alliance was a demand to use tourist tax revenue to promote local produce. Has the alliance not noticed that there aren't any tourists? Undeterred, it made its demand, and the ministry was swift in responding that it has made available 850 grand for precisely the things that the alliance was seeking.

One of Valtonyc's rapping targets was Jorge Campos, the leader of Vox in the Balearics. It was in fact Jorge, in days before Vox had become a reality on the islands, who presented the original denuncia that ultimately led Valtonyc to the Supreme Court and to the upholding of the 42-month sentence that had been passed on him.

Showing no interest in Valtonyc, Jorge was instead setting out a list of things for the Balearic government to do with regard to tourism. There is a Vox motion for parliament to consider, and it was full of eminently sensible proposals, such as eliminating the tourist tax; so sensible that it won't be done. Otherwise, Vox rising star, Macarena Olona, was pursuing a similar theme to that of the previous week, when she had called Pedro Sánchez a gravedigger. This time she had a go at the "socialist-communist" government of PSOE and Podemos for wishing "to introduce regulation of euthanasia" in Spain. Octogenarians, she opined, were not being allowed to go to intensive care units.

What could it possibly mean? Numerous theories were being advanced to explain the mysterious image and message that was appearing on social media. "Majorca will be a doughnut", the message suggested, adding the hashtag #Mallorcadonut. 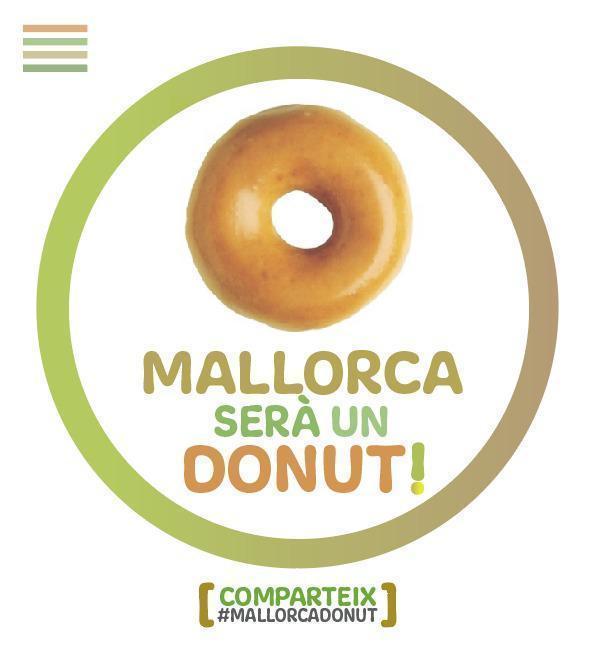 It wasn't, it was said, anything to do with any doughnut maker. It seemed to be political, with linked Twitter addresses including those of republican-oriented parties such as the CUP and Crida. Perhaps it was a metaphor for how Majorca will be as a consequence of the crisis; a hole having been created in the heart of the island. Who knows, but when one thinks about it, Majorca is something of a doughnut anyway. Most of the population and development is on the coast, while there is comparatively little in the centre, other than the farmers constantly arguing with the agriculture ministry.

Former prime minister Mariano Rajoy must either be thinking thank God I'm no longer PM (some say president) or believing that he could be making a better fist of things than Pedro. Were he still PM, Mariano may have pursued UK policy - that of letting people out to exercise. Photos emerged of Mariano dressed in sportswear and with a heart-rate monitor as he was out and about walking, which in Mariano's case is a sort of racewalking.

The interior minister, Fernando Grande-Marlaska, having become aware of Mariano seemingly flouting confinement regulations, said that "appropriate investigations are being carried out".