Es Trenc on the southeast coast of Majorca is one of the most beautiful spots on the island, its white virgin sand, crystal clear water and sun drenched beaches are truly stunning.

But that’s not all this beauty spot has to offer. 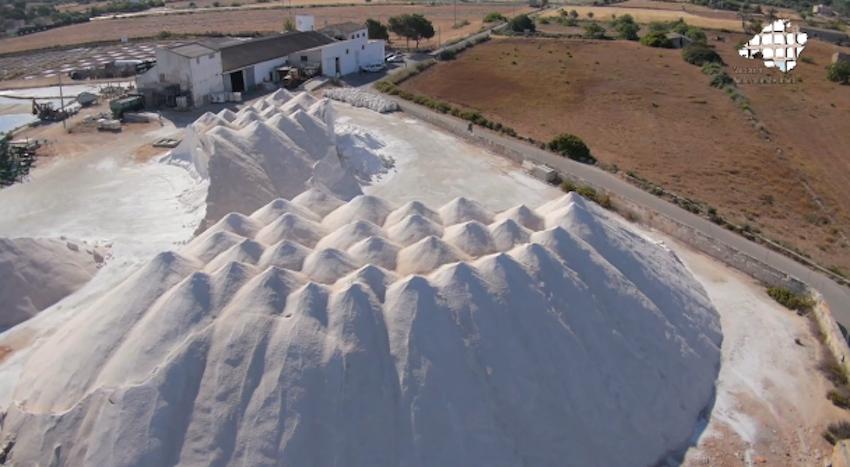 Salt production in the Balearic Islands has been linked to the Phoenicians, expert traders from southern Lebanon, who came to Majorca in the 8th Century BC.

The salt pans in Es Trenc were built much, much later, in the early 1950’s and production began in earnest in the 1960’s.

The marshes now sprawl over more than 150 hectares of protected land in Campos which is also home to more than 200 species of birds, including Ospreys and Flamingos. 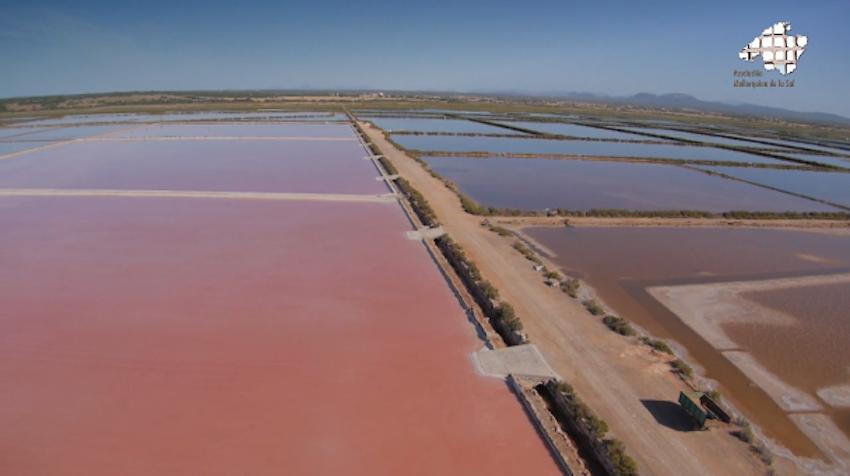 Flor de Sal produces tons of salt every year and it’s a complicated process that hasn’t changed in decades.

Sea water from Es Trenc beach is pumped inland via a 3 kilometre long canal, then decanted through an ancient system of ponds and channels, each one fine tuning the salt until it reaches the wooden salt pans, which is where the magic happens.

Sal Marina is a common sea salt and is harvested from the biggest ponds on the property which are about the size of a football pitch.

“Sal Marina has a 99.9% sodium chloride content so it is heavier, the crystals are cube or pyramid shaped and they don’t contain as many minerals,” explains Laura.

At the end of each summer the sea water is drained off these large ponds, leaving a layer of crystallised salt on the bottom, which is collected and processed and eventually ends up on your dinner table.

It used to be backbreaking work, shovelling tons of salt in searing heat and chronic humidity, then hunching over heavy wheelbarrows, pushing them back and forth to the salt mountains for hours on end and the repetitive motion caused severe pain in the back, waist and arms of the workers. Now machinery takes care of the heavy lifting and the distinctive white peaked mountains of salt that are produced here can be seen from miles away.

The small salt pans are only for the Virgin Salt and Flor de Sal which is collected by hand.

Virgin Salt is the crystallised sodium chloride that’s found on the bottom of the salt pans and is collected twice a year. 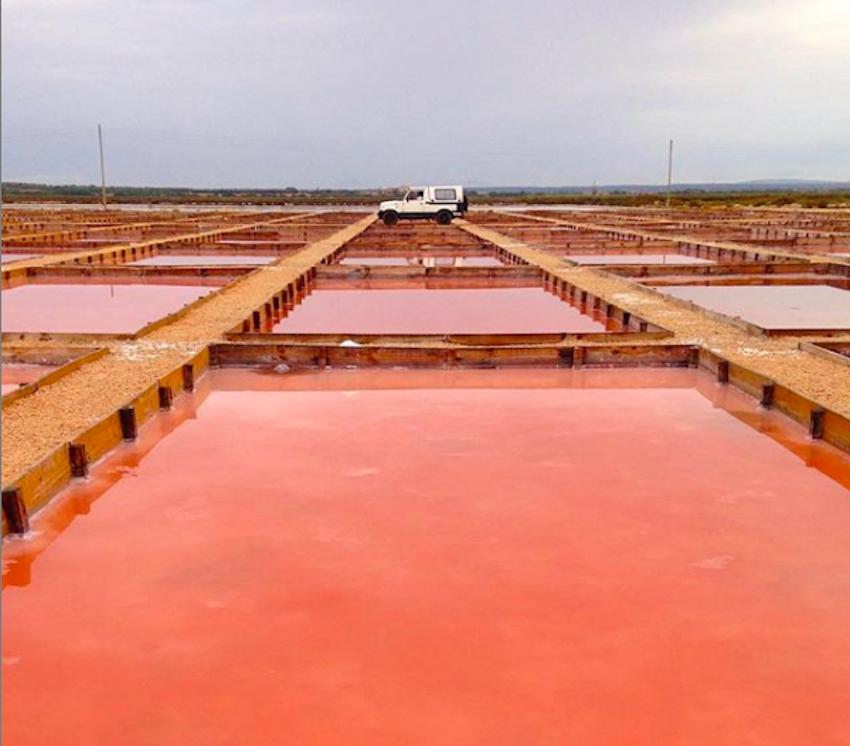 Flor de Sal d’Estrenc is the purest, top of the range salt which sits on the top of the water and is usually harvested during the hot summer months.

“We have 600 salt pans just for Flor de Sal, which only crystallises in summer when the conditions are perfect, with hot sun, a soft sea breeze and low humidity,” Laura tells me. “When the sun warms the water it vaporises and pushes up the crystals which are full of minerals, but contain less sodium chloride than normal table salt, which is what makes it so special.”

The harvesting is done by Salineros, who look super cool in their white t-shirts, white espadrilles, cream khaki shorts and panama hats and spend their days ankle-deep in water, skimming the Flor de Sal crystals off the top of the ponds with their rakes and plopping it into special woven baskets, which allow the excess water to run off. 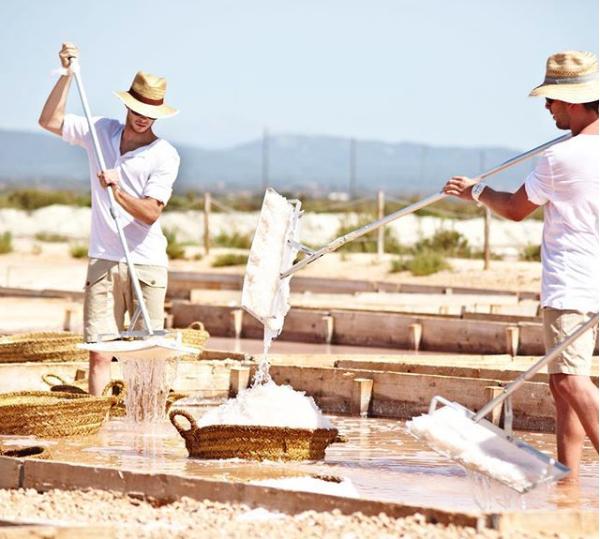 “Flor de Sal contains 20 times more magnesium than common sea salt, trace elements of other minerals and has less sodium chloride. The crystals are a little softer too and they are flower shaped which is why it’s called Flor de Sal.”

Once the salt baskets are full the Salineros load them on to wheelbarrows and take them to the drying area.

The crystals are spread out on large tables and the artisanal process of sifting and checking begins, to let the air run through the salt and to make sure that there are no little stones or pond insects nestling amongst the grains. 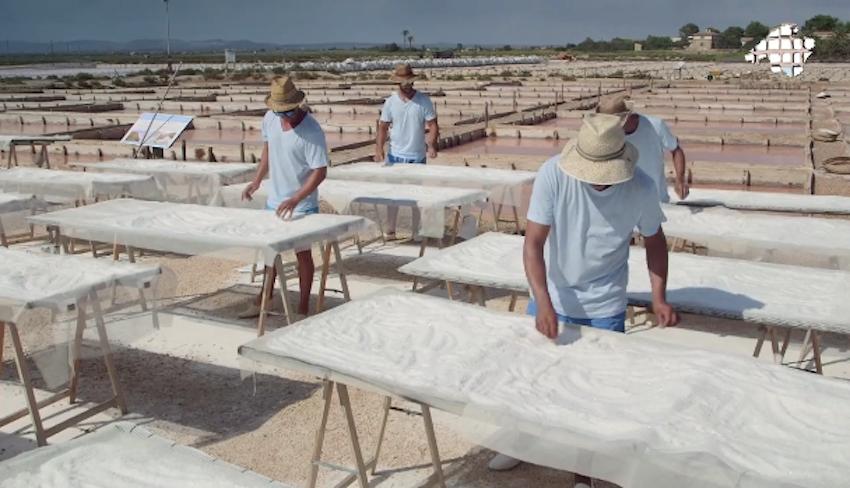 The drying process varies in length and can sometimes take a whole day, depending on the strength of the wind, the level of humidity and the heat of the sun.

Once the crystals are completely dry they are packed in sacks and labeled with the date, the name of the Salinero and the weather conditions on harvest day.

From there the sacks go off to the production room where the salt is blended with different flavours and shipped out to customers in 30 countries worldwide.

There are also several flavoured versions of Flor de Sal, such as, Orange & Chilli, Beetroot, Olive, Hibiscus, Sri Lanka, Mediterranea, Rosa and Shiitake and two with traditional Majorcan ingredients, Hinojo Marino, which is a plant that grows on the seashore and ramallet tomato which is the one that’s used for pa amb oli. 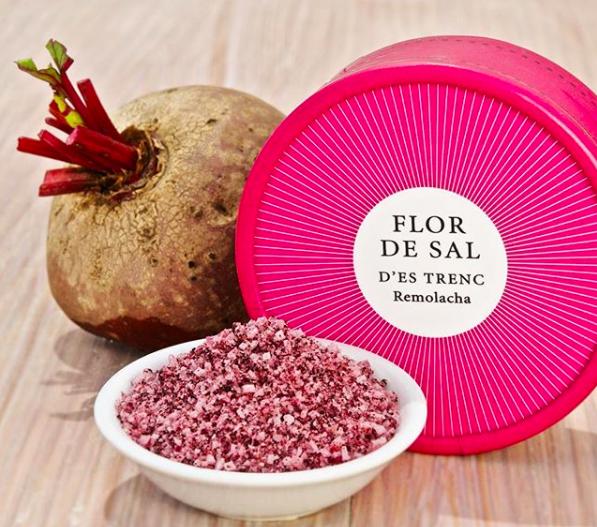 Flor de Sal has also launched a snack range of potato chips and almonds and is currently holding talks about a new, top secret, limited edition range of products.

We all have salt on the table and most of us don’t give it a second thought, but a little bit of sodium is vital to our well being.

Guided Tours of the salt flats include the different stages of Flor de Sal production and the factory. Tickets cost 8 euros for adults, children get in for free and the tour takes around one hour. 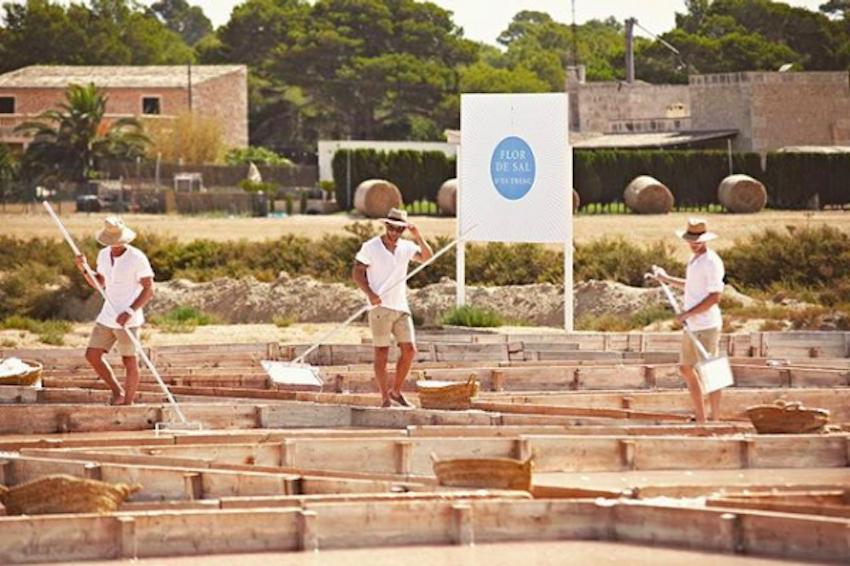