Weekend weather in Mallorca. | A. Sepúlveda

The warm temperatures of the last few weeks are coming to an end this weekend and it's going to be a bit chilly, according to the State Meteorological Agency’s María José Guerrero.

The change in the weather kicks off on Friday with clouds and scattered showers in most places and daytime highs of 17º-18º. 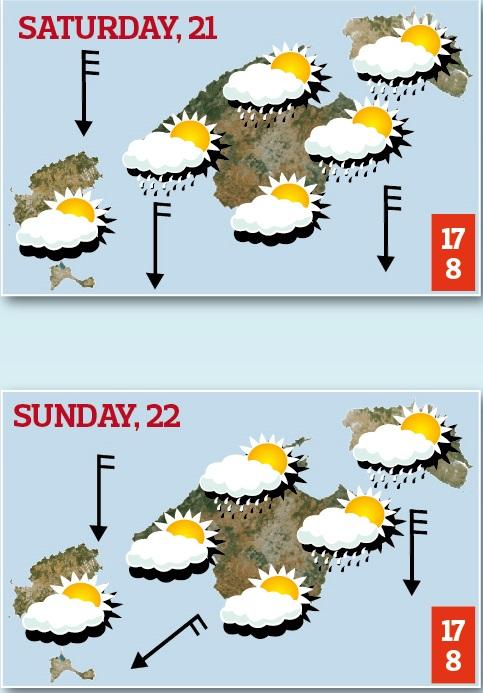 A weather warning has been issued for north-northeasterly winds gusting up to 70 kilometres an hour in some areas, which will also make it feel much cooler. Overnight temperatures will hover around 13º which is slightly warmer than the average low of 10º at this time of year.

An orange alert has been issued in the north and northeast of the Island for waves as high as 8 metres in some areas and 3-4 metres high in the east of the island.

Saturday will be overcast and the mercury will fall to 16º-18º with moderate to strong north-north easterly winds and overnight lows of 11º-14º.

The orange alert will be lowered to yellow as the waves drop to 3 metres.

Aemet is predicting cloudy skies on Sunday with moderate-strong northeasterly winds and a slight increase in daytime temperatures, but it will be noticeably cooler overnight.

"The most significant changes this weekend are the drop in temperatures and the north-north easterly winds, which will make it feel around 2º colder than the temperatures forecast,” says María José Guerrero. “The strong waves in the north and northeast of Mallorca will also be significant."