Some fifty delivery people who work for various online services protested against the so-called Riders' Law in Palma on Wednesday. This law will regulate their working conditions, meaning that they are no longer self-employed.

Following months of discussions, the national employment ministry's decree has created a situation that "does not comply" with delivery people's requests. Their spokesperson in Mallorca, Mercedes Echegaray, said that "we want to maintain the status of digital self-employed with some small improvements". 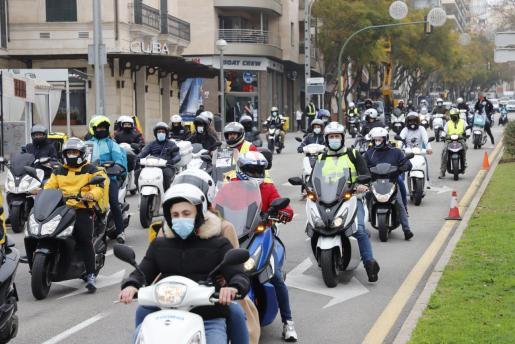 The motorised protest went from Plaça Espanya in Palma to the national government delegation's offices. Shortly before 11am, horns were sounded. There was simultaneous action in twelve cities in Spain.

In the Balearics, there are around 200 delivery people who work for online services. Nationally, the number is at least 30,000. Mercedes Echegaray explained that the working conditions' regulation could lead to unemployment and that salaries for people who are directly employed will become "precarious".