As I wrote this yesterday morning, 11-year-old Luna Fluxá was racing in qualifying for the second kart race of the new season in the powerful OK Junior class for the first time - and in Mercedes colours.

Luna’s mother, Lisa, originally hails from Northampton. She met her husband, Lorenzo Fluxá Domene, in 1998, while they were both working in the tourist industry in Tenerife and decided to move to Lorenzo’s home island of Mallorca in 2001. Today, the couple, who run the LJ’s Ratxó Eco Luxury Retreat in Puigpunyent, have four children, three of whom are racing drivers. 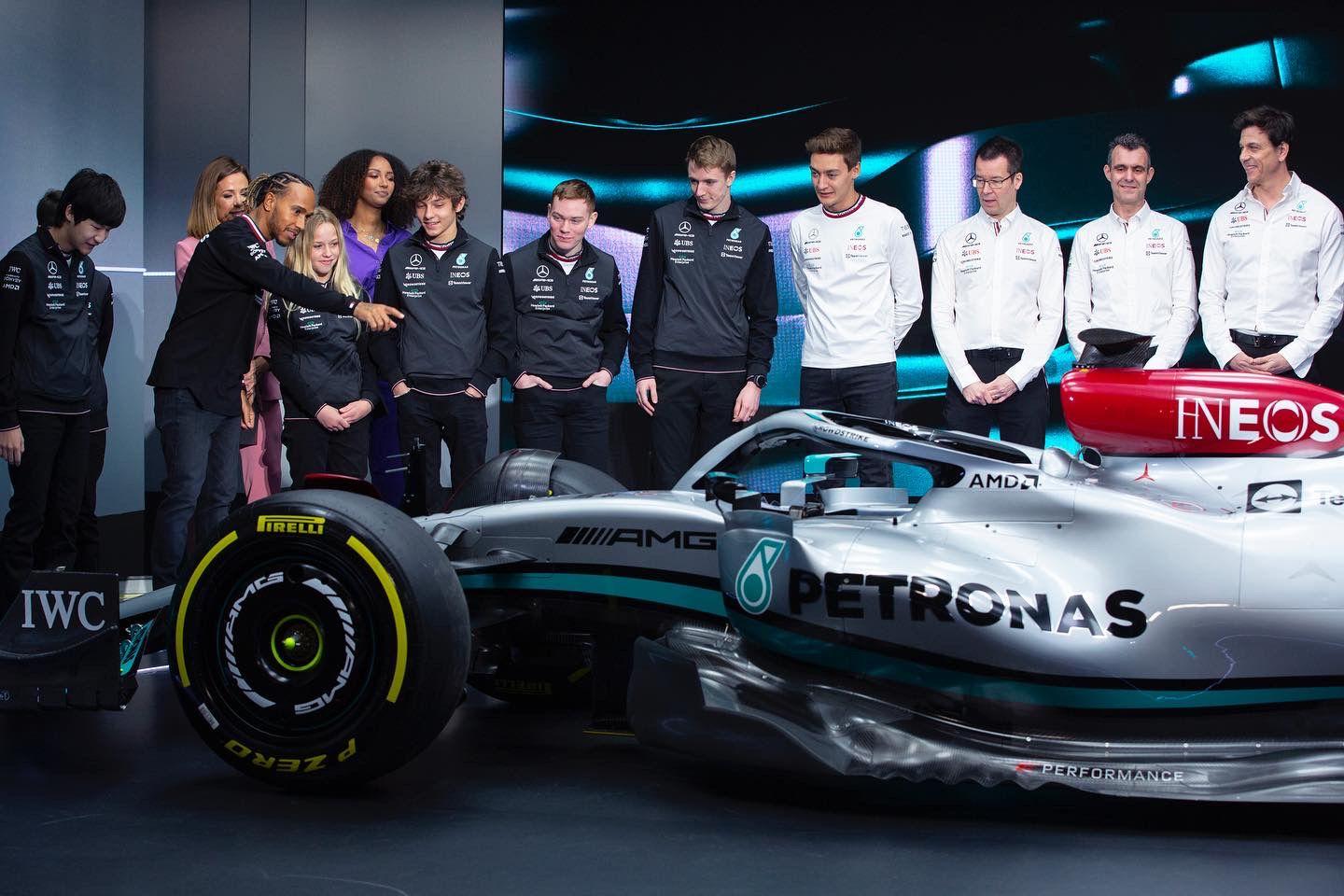 The eldest, 17-year-old Lorenzo, competes in F3 and Lucas Fluxá, now 14, is quite a figure in karting: he was proclaimed Spanish champion in 2018 and is having a fruitful career in several European competitions. And now, little Luna is the latest to join the racing tradition and she is off to a brilliant start.

Although she has been competing since 2017 (she started at just 7 years old) and with the support of the ‘Programa Mujer y Motor’ of the RFEdA, she has competed in several continental championships all over Europe, with victories such as the IAME Euro Series in X30 Mini that she achieved in 2021. And that is when a number of the major teams came knocking.

“There was a great deal of interest from women’s F1 teams but Luna was not that interested. As far as she is concerned, when she puts her pink helmet on, she’s just as good or even better than her male rivals. She is determined to do this properly and she has no doubts about the way she drives: ‘I overtake and I don’t let anyone take it back from me’ is her mantra,” Lisa told the Bulletin last week. 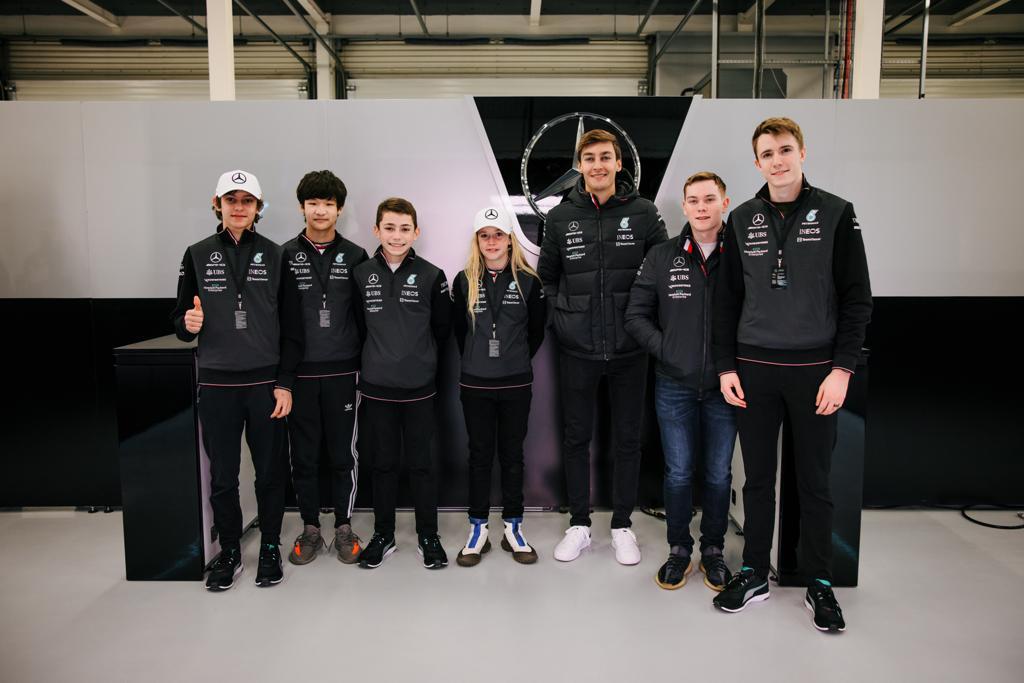 The past couple of weeks have been a whirlwind for Luna. Just ten days ago she was in the UK for the world presentation of the new Mercedes F1 team and its racing cars for the new season.

She was presented alongside the rest of Mercedes’ new signings for its junior programme - Britons Daniel Guinchard and Alex Powell; Estonian Paul Aron; Italian Kimi Antonelli (one of the great promises of the future); the Chinese Yuanpu Cui; and the Dane Frederik Vestri. And as well, there were Lewis Hamilton, teammate George Russell, and team principal and CEO, Toto Wolff.

“It was very strange on the drive up to the Mercedes headquarters and factory in Brixworth and Brackley. They are both in Northamptonshire, which is where I was born, so it was like a trip down memory lane. But this time we had Luna with us and no sooner had we reached the headquarters than she was straight in there helping the mechanics getting the new racing car ready for the presentation. It was not long before Lewis was alongside her. This is one of her great assets. She’s not afraid of getting stuck in and within minutes she was chatting with the mechanics, not to mention the greatest F1 driver in history, Lewis. He and the whole team were great, it was like one big happy family and that makes it easier for us as parents. 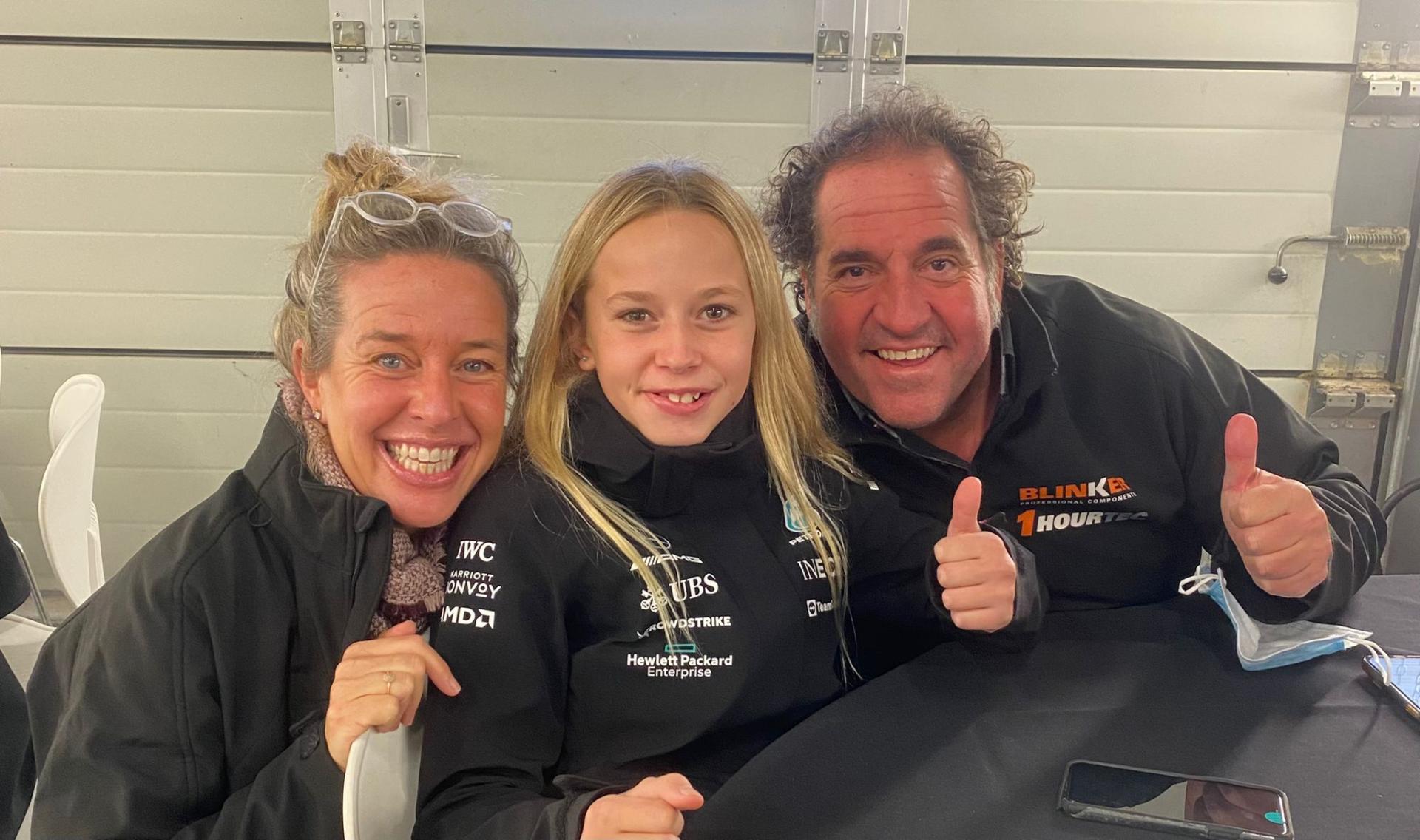 “Everybody was so polite, especially the drivers and the members of the Junior Programme. Obviously it’s a different game when they are racing, but off the track they all got on so well. That was encouraging because, even at an early age and as we’ve seen, there are some hotheads on the circuit.

“We’re both car and racing nuts. My husband races classic cars, I love driving fast and we have plans to set up a classic car and motorbike museum on the island.

“But right now, we’ve got the other two boys racing as well. Although Luna has gone up a category this year, apart from being the only female on the grid, she is also going to be one of the youngest. And she'll be racing against her older brother Lucas, so that’s going to be interesting and exciting.

“Plus, having been offered and accepted a ten-year contract with Mercedes, she will continue racing for Kartrepublic for the moment. They are going to be watching and supporting her across the board all of the way. That suits Luna just fine because she wants to become the first female F1 champion and she couldn’t be with a better team,” Lisa said. 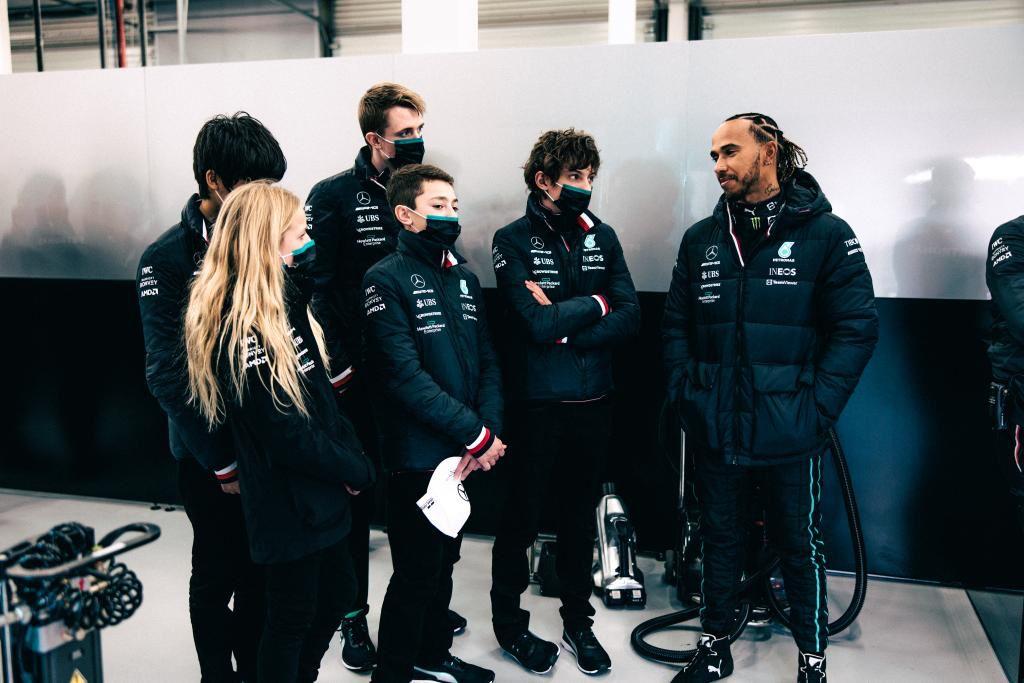 But it’s not all about racing. Luna is now going to be away for three weeks. “With no direct flights between Mallorca and Italy during the winter, there is no point her coming back for the odd day. She has three weekends of racing coming up, so she will be with her mechanic, who takes great care of her, while the boys are with their personal trainer Pep - Pep Ramis - who is like their big brother.

“And all of these guys will be making sure they all continue with their education. All three are studying at Bellver International College and the school has been brilliant, so supportive. They know it’s not easy for any of them but they are given their homework early, when possible, so they can all keep up with their studies. Last year, for example, while Lorenzo was racing in Dubai, he was taking his mock A Level exams. All three of them are extremely disciplined - they know it is studies first, then the racing. Luna was doing her school work on the flight over to Italy on Wednesday, for example. Then on Thursday, it was into qualifying, and that is not an easy operation to juggle.

“You would not believe the time and effort which goes into pre-race preparations, qualifying and then post-race. There is always the debrief, they go over the race, what went right, what went wrong, discuss the race set-up of the cars; you name it and the kids are involved in every step of the process. And it’s extremely tough. For example, one of the pre-race tests is a blind run. This involves Luna sitting on top of the parked kart and going through the race with her eyes closed. She has to talk her team through the race, the turns, the straights, the braking etc., while being timed. It’s very daunting to say the least and requires a serious amount of dedication and concentration. But as parents we give them all the support, as does Bellver International College. They are extremely proud of what three of their pupils are achieving as well, so too are their fans' base and former racing colleagues in Mallorca.

“This is where they started driving and racing and competing - in Magalluf, Ca’n Picafort, and Llucmajor - before moving on to the mainland for regional and national championships. Between the three of them, they’ve pretty much won them all.

Luna is now Mallorca’s silver arrow and she has her sights firmly set on the bullseye - F1 glory. How much of that Lisa is going to watch remains to be seen.

“At this level of karting it starts getting very serious. But as far as Mercedes are concerned, this season is not about winning, they want to see her potential progress along with her skills and her technique. They’ve committed to a long contract and will be watching her all the way. They get complete updates after every race and also have their people keeping a close eye on her. 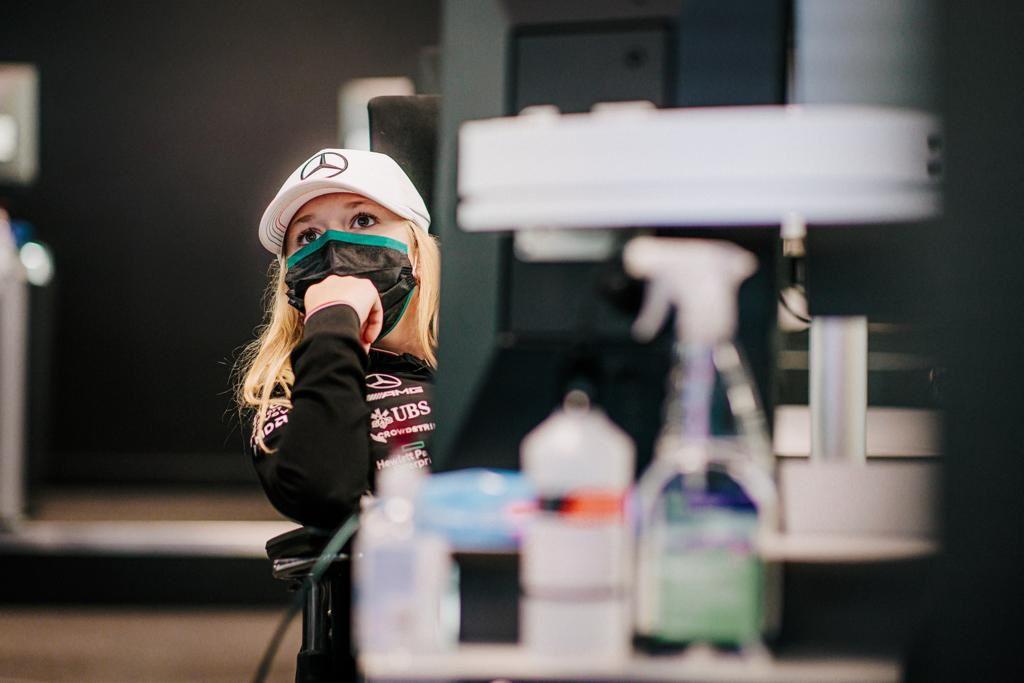 “Unlike me. I still get extremely nervous when they are racing. Lorenzo loves going to the races and does as much as he can, but when I go, I stay in the car. I still get very nervous, although it’s hard to contain the excitement.

“Although all four of our children where born in Mallorca, they are very aware and proud of their English roots and being able to speak fluent English helps a great deal.

“I remember when we left the Mercedes HQ, Luna suddenly said she had to say goodbye to Lewis. I turned around and he was surrounded by his team, sponsors etc., but Luna went over, tapped him on the shoulder and Lewis had no problem. They had a quick chat and he wished her all the best and said he looked forward to seeing her soon. She really could not be in better hands,” said Lisa, who was not in Italy yesterday but was keeping an eye on every development.

“I tend to have all the screens on with qualifying, racing and the times. I’m not watching but I am. I can’t help myself,” Lisa admitted. 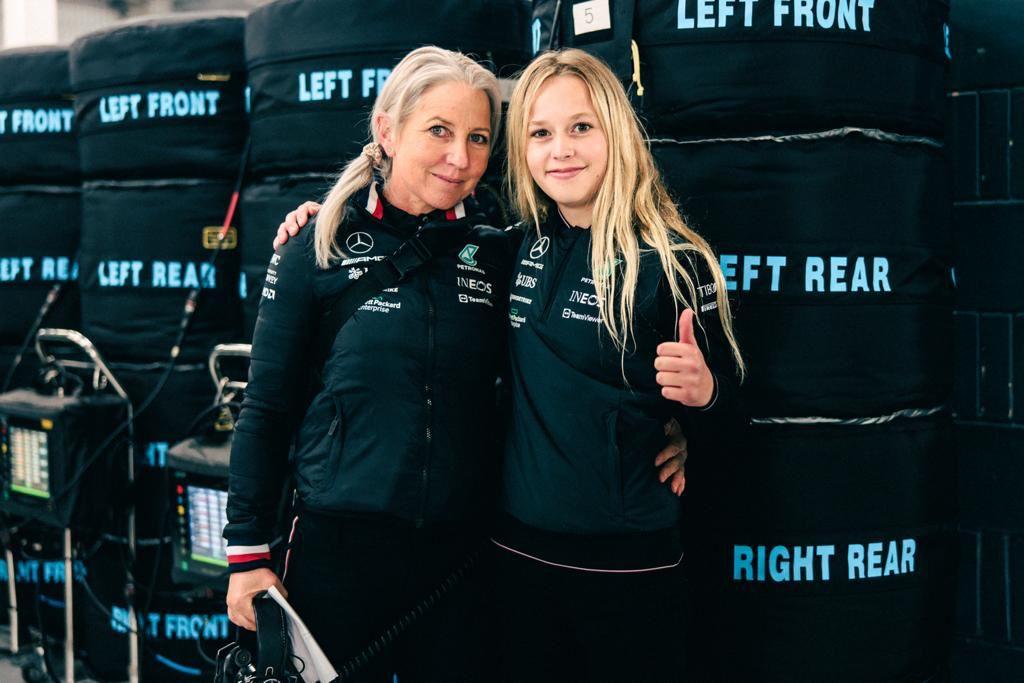 And the first WhatsApp I received yesterday was from Lisa: “She’s racing right now, started 20 and up to 10th place in 1st heat!”