After a weekend when this guy from Birmingham asked me if I knew the difference between a buffalo and a bison – I didn’t so he told me “You can’t wash your hands in a buffalo !” – Real Mallorca’s seven-month-long unbeaten away run came to a crashing end as they were well beaten 2-0 by Sporting Gijon on Sunday afternoon.

The home side remain unbeaten at their El Molinon stadium and never looked like losing to a Real Mallorca side who were abject at best.

They looked a million miles away from being leaders of La Liga SmartBank and gifted both goals to the Asturians. Sporting Gijon boss David Gallego had done his homework, his team never giving Mallorca any time to formulate a game plan.

Gijon pressed high up the pitch and their Serbian striker Uris Djurdjevic bagged another two goals bringing his tally so far to an impressive 19.

The home side completely dominated for large periods with Mallorca’s shots on goal mostly finishing off in the car park at the north end.

Salva Sevilla had a long-range effort comfortably saved by Marino in the 20th minute and seven minutes later Sporting went ahead. Antonio Sanchez shoved Gijon’s Javi Fuego over in the penalty area giving him a kick on the ankle on the way down.

It looked like Sanchez had got away with the dastardly deed until VAR took over and a penalty was awarded. Djurdjevic swept the spot kick home sending Reina the wrong way, 1-0.

In the second half Mallorca tried to make a game of it but we were a poor second best to Gijon and were reduced to walking pace at times. Anybody who didn’t know that Mallorca were league leaders would have thought you were having a laugh if you’d told them it was true. With five minutes left on the referee’s watch, Gijon doubled their lead.

Substitute Fran Gamez, who came on for Joan Sastre in the 67th minute, inexplicably headed the ball, in a childish error, backwards towards Reina who was all of 30 yards from the intended pass back. Djurdjevic nipped in front of Reina and with an exquisite lob scored Gijon’s second, 2-0. Djuka (nicknamed the Serbian Minotaur) tormented our defence all game and was easily the best player on the pitch. 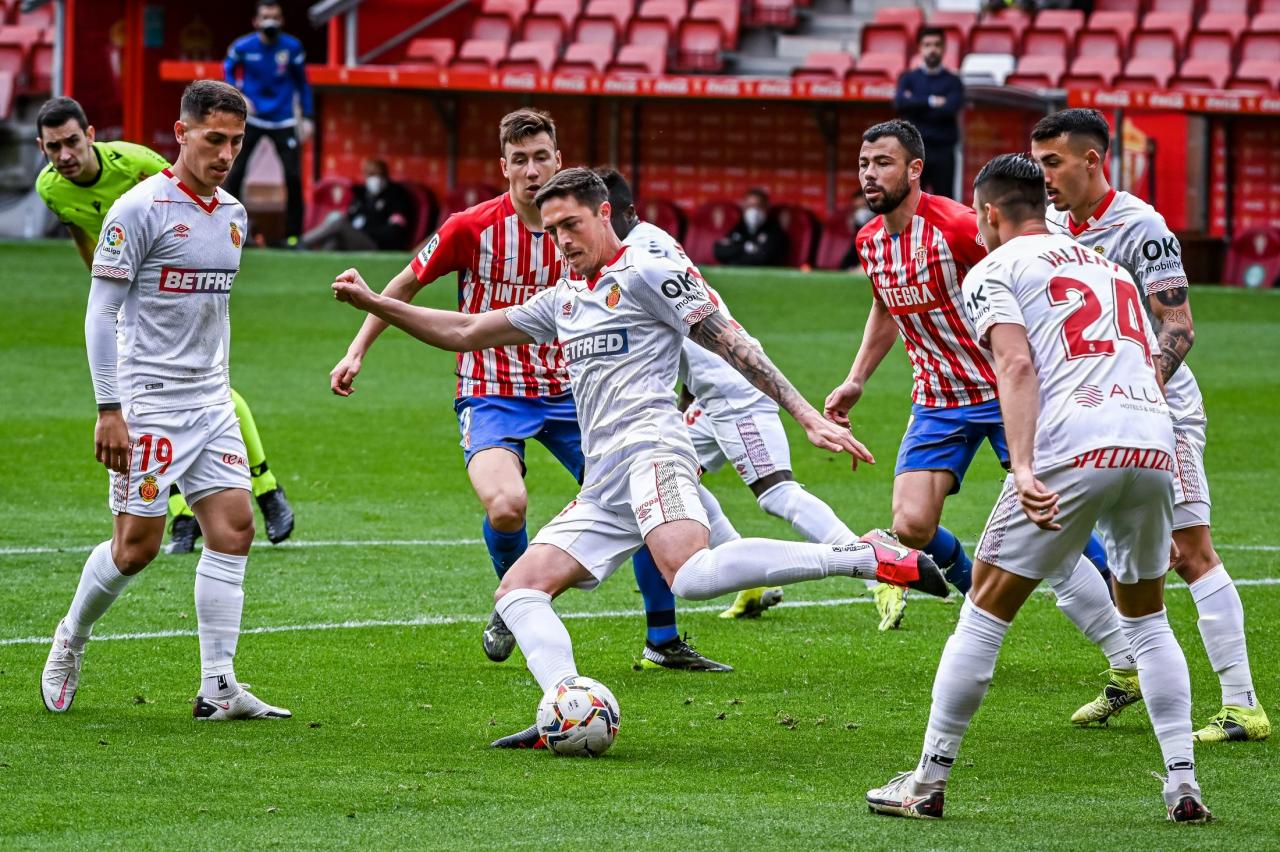 Fifteen minutes from time with coach Luis Garcia Plaza running out of substitutes, Salva Sevilla, who had a quiet 76 minutes, was replaced by the forgotten-about Trajkovski who joined Abdon up front. But it was to no avail, no balls for Mallorca were getting as far as the penalty area, as the referee blew for full time putting all us Mallorquinistas out of our misery. One question being asked on social media yesterday was “What’s happened to Lago Junior ?”

SUMMING UP : On Sunday Mallorca’s first away defeat in seven months arrived, as some day it had to. It would be foolish not to realise that Real Mallorca are going through a slight slump in form. Our last two games against Logroñes and Cartagena were won with more suffering than normal and on Sunday we lost without putting up much of a fight.

There are 13 games left to play in what could be an eternity, especially if we play as badly as we did in El Molinon on Sunday. Despite this defeat we’re still five points clear of third-placed Espanyol. Second-placed Almeria were expected to beat Alcorcon last night which would see our lead at the top cut to just two points. Next up is a difficult game as we play another Asturian side, Oviedo, in the Son Moix on Saturday at 18:15.

Watching a couple of televised games from England over the weekend there seems to be a certain dictate from commentators. They have found the need to apologise when pitch-side microphones pick up any four-letter obscenities shouted out from the few lucky spectators allowed inside these almost empty soul-less grounds.

These microphones are put there to make these offended “diddums,” watching from their front rooms, feel like they’re part of the crowd.

Four letter industrial language is part and parcel of the vocabulary in football and the game is tribal with emotions running high. If aggrieved fans don’t like the occasional “wee swearie” then turn the sound down.

By all means apologise if there was any chanting which contained references to disasters or poverty or worse whenever Steve McManaman’s co-commenting !

AND FINALLY, two couples were playing poker. Danny accidentally dropped some cards on the floor. When he bent down to pick them up, he noticed Martin’s wife Tina wasn’t wearing any underwear. Shocked by this, Danny hit his head on the table and emerged red-faced. Later he went into the kitchen, Tina followed him in and said “Did you see anything down there that you liked ?” A slightly flustered Danny had to admit “Yyyes, I did.”

Tina continued “If you want to see more, it’ll cost you £300.” After a second’s deliberation, Danny decided he wanted a piece of the action. She told him that since Martin worked on Friday afternoons, and Danny didn’t, that he should come to their house around 2 pm on Friday. Friday arrived and Danny went to her house as arranged.

After paying Tina the £300, they went into the bedroom and had an extra-marital dalliance. Martin arrived back home at 6 pm and asked his missus “Did Danny come by this afternoon ?” Totally gobsmacked, she replied “Yes, he did stop by for a few minutes.” Martin then asked “Did he give you £300 ?” Tina thought “Oh no, he knows, I’ve been rumbled.”

Reluctantly, she replied “Yes, Darling, he did give me £300.” “Good,” said Martin. “Danny came by the office this morning and borrowed £300 from me and said that he’d stop by our house on his way home and pay me back. It’s so good to have a friend you can trust !”