RCD Mallorca, in the first half of Wednesday night’s game against high-flying Sevilla, played some of their best football seen in the Son Moix since the heady days of coaches Hector Cuper and Luis Aragones 20 years ago.

The Palma side, who had nine in the starting XI who played in La Segunda last season, dominated much of the game although a late VAR decision had its own part to play in a fabulous game of football in front of a 15,200 crowd.

Two years ago in Son Moix, VAR cruelly stole the result away from us against the same opponents but on Wednesday night Lady Luck came to our rescue, in a game we should have won but in the end were very grateful to share the spoils.

Mallorca fans must feel proud of their team because for an hour we made Sevilla (a contender for the La Liga title) look ordinary.

We started the stronger team, wasting no time in putting the visitors under pressure with a slick display of intelligence, courage and efficiency which saw us take a well-deserved lead in the 21st minute.

At that time the entire stadium was clapping to show affection to Antonio Raillo (who plays with shirt number 21).

Our injured centre back had an ankle operation in Barcelona on Wednesday and is likely to be sidelined for at least another three months. The applause was dying down when Mallorca deservedly took the lead.

A fabulous move between Dani Rodriguez, Angel and Amath saw the Senegalese international get to the byline where he put over a cross which reached an unmarked Antonio Sanchez at the far post, who belted the ball into an empty net giving the Majorca-born player his first goal as a professional player in La Primera, 1-0.

All pre-match predictions looked to be out the window as Sevilla tried and failed to find a way back into the game.

A mistake by Reina on the half-hour mark saw Rafa Mir miss a half-chance as the game ebbed and flowed at pace as referee Jaime Latre blew for half time.

During the break the hot dog stand near our area was heaving and it was great to see all the food outlets open again after the Covid restrictions.

The second half began with Mallorca again on top, and a fantastic counter-attack involving Amath, Sanchez and Angel saw the latter’s shot come back off the post as the Sevilla coach Lopetegui rang the changes.

With Mallorca playing at high tempo, it was little wonder they began to get leggy as the second half progressed.

Sevilla started to push Mallorca back and in the 73rd minute they drew level with a stunner from ex Tottenham Hotspur player Erik Lamela, who put Sevilla back on level terms with 17 minutes left to play.

It was now our coach Luis Garcia Plaza’s turn to bring on substitutions as he looked to shore up a creaking defence.

Our goal came under siege and the extra time board went up – four minutes.
By now the referee had gone card crazy and he expelled the Sevilla assistant coach for dissent and our left back Jaume Costa for an untimely kick in the nether regions of Lamela.

What no-one in the crowd expected (especially those who inexplicably were leaving early) was what happened in the 94th minute. 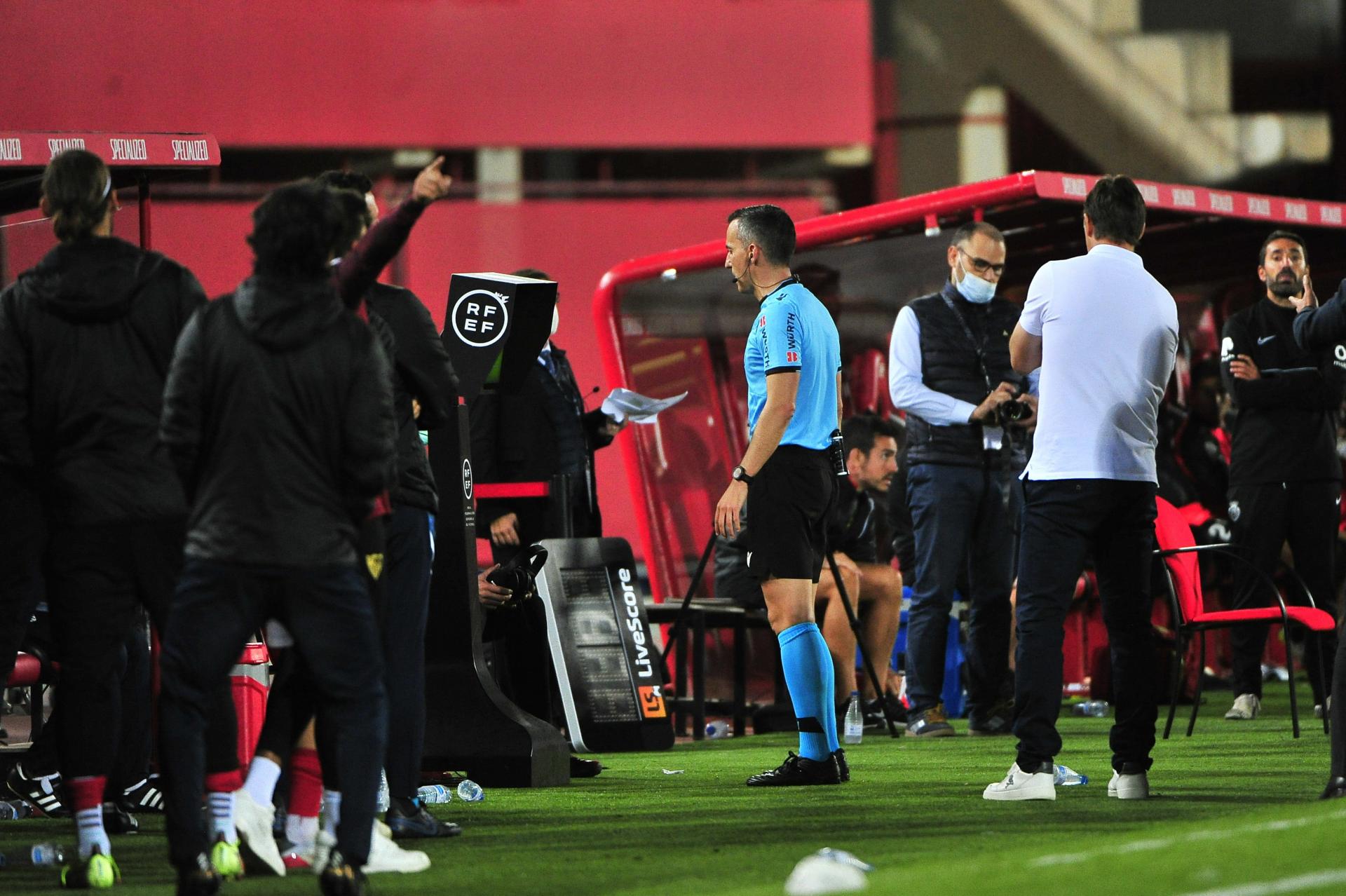 Ocampos slipped in a second goal for Sevilla and nobody (but nobody) could believe it.
Again with almost the last kick we’d gone behind – another dagger through the heart of RCD Mallorca.

When that went in the whole of the Sevilla bench charged on to the pitch to celebrate what they thought was the winning goal.

Coach LGP tore off his jacket and threw it onto the ground in anger – it was heart-breaking stuff.

Mallorca players were incensed that the goal was allowed as they thought in the lead up, the ball had hit Fernando’s arm as he brought it under control.

After a few interminable minutes an under-pressure referee viewed the pitch-side monitor and much to the chagrin of the visitors disallowed the winning goal – what drama as the home fans breathed a huge sigh of relief !

Mallorca haven’t long to recover as they travel to Cadiz to play on Sunday at 2 pm.

PS When the referee made up his mind not to award the goal after he’d viewed the video evidence, Sevilla players and staff were incandescent with rage. After looking at the incident several times when I got home, I’ve got to say they had a point, but for obvious reasons we’ll take it!